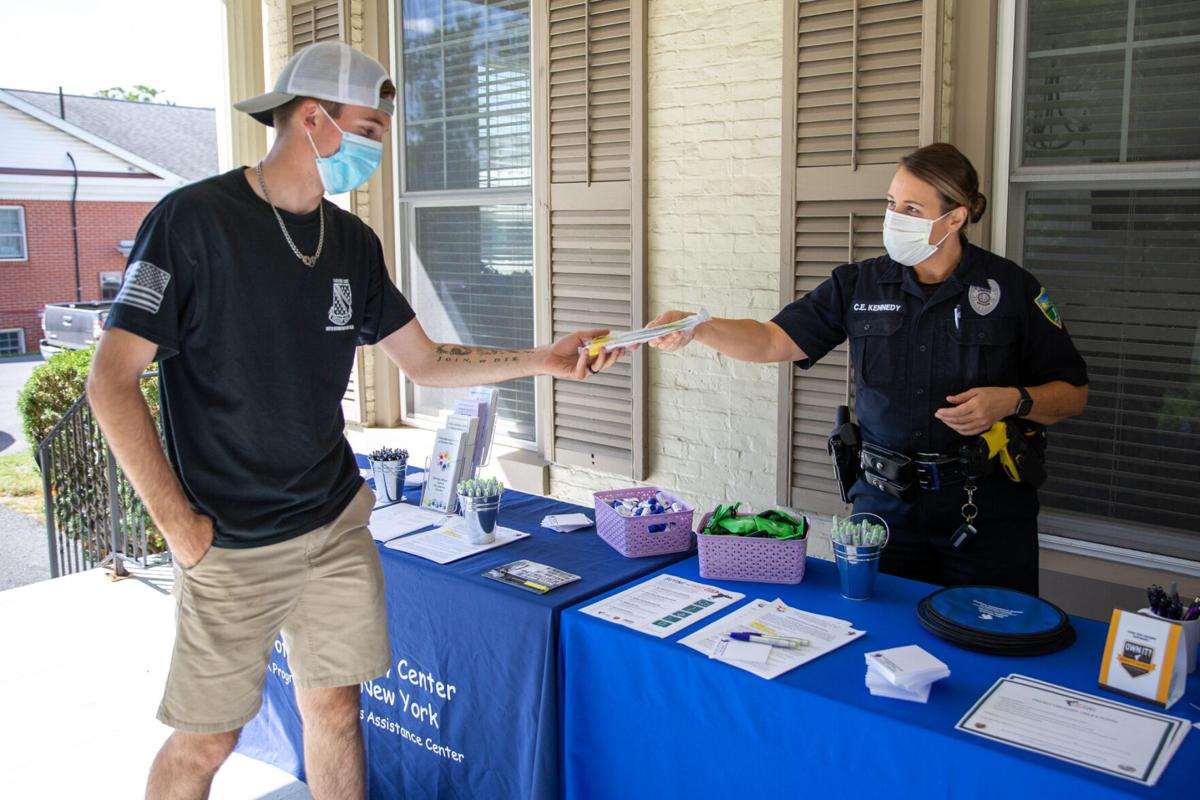 Dexter Police Chief Christine E. Kennedy hands a free gun lock Saturday to Bryce D. Sellers of Florida, a soldier stationed at Fort Drum, at the Victims Assistance Center of Jefferson County in Watertown. Mr. Sellers has a 3-year-old at home and stopped by the giveaway to pick up extra security for his firearms. Kara Dry/Watertown Daily Times 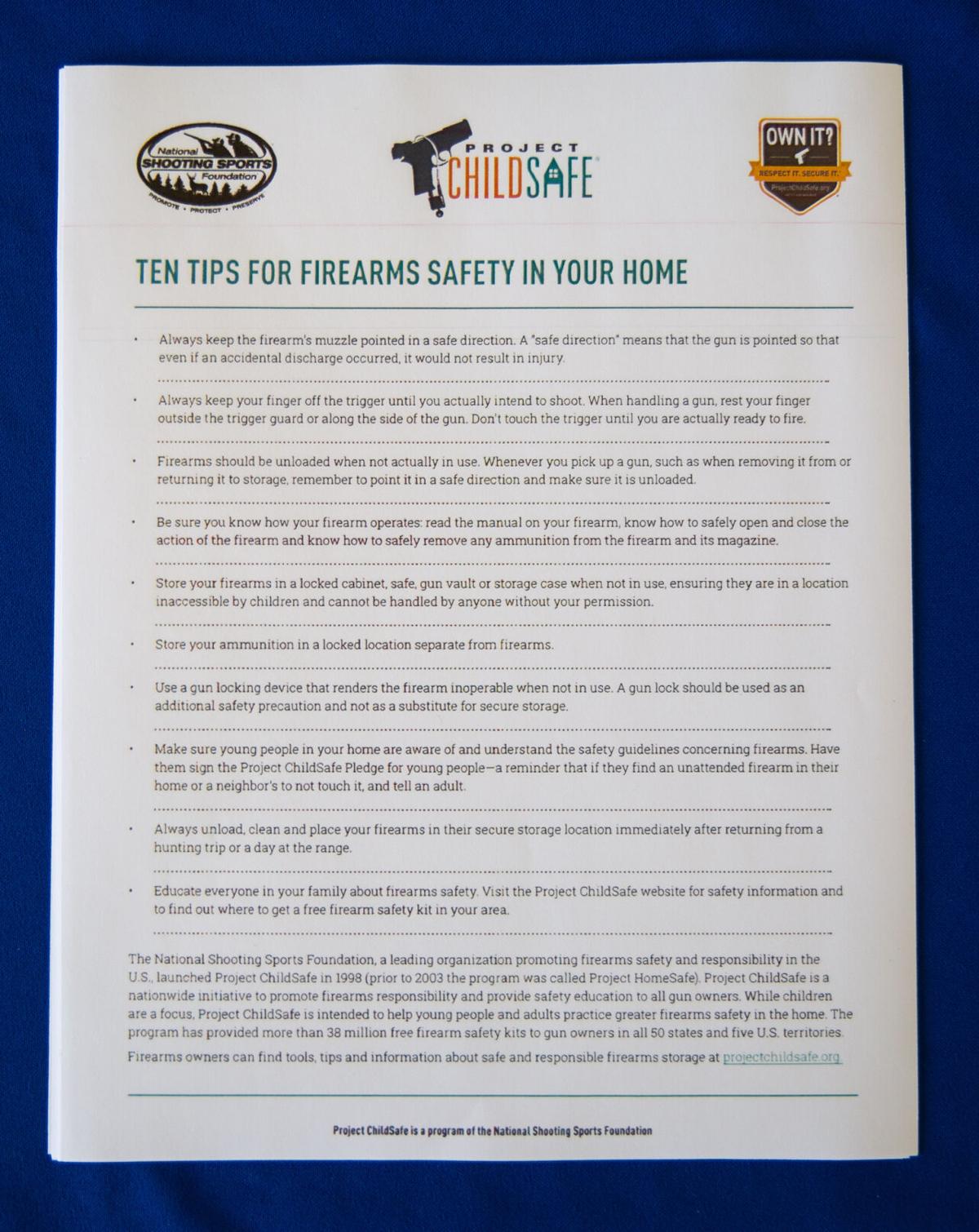 Dexter Police Chief Christine E. Kennedy hands a free gun lock Saturday to Bryce D. Sellers of Florida, a soldier stationed at Fort Drum, at the Victims Assistance Center of Jefferson County in Watertown. Mr. Sellers has a 3-year-old at home and stopped by the giveaway to pick up extra security for his firearms. Kara Dry/Watertown Daily Times

Most deaths among Americans between the ages of 10 and 34 occur as a result of suicide.

That’s a frightening statistic. It recently motivated the Victims Assistance Center of Jefferson County to work with the Dexter Police Department to take action while raising awareness during National Suicide Prevention Month.

Representatives of both organizations gave away free gun locks Saturday at the Victims Assistance Center, 418 Washington St. in Watertown. Anyone wishing to obtain a gun lock may contact the center at 315-782-1823.

The locks were provided by Project ChildSafe. This group is “a program of the National Shooting Sports Foundation to promote firearms safety and education. We are committed to promoting genuine firearms safety through the distribution of safety education messages and free firearm safety kits to communities across the U.S.,” according to its website.

Out of the 47,173 Americans who killed themselves in 2017, more than half of them (23,854) died from self-inflicted gunshot wounds, according to the Centers for Disease Control and Prevention. That’s a rate of 7.3 deaths for every 100,000 people.

“The impulsivity of suicide provides opportunities to reduce suicide risk by restriction of access to lethal means of suicide (‘means restriction’). Numerous medical organizations and governmental agencies, including the [World Health Organization], the European Union, the Department of Health in England, the American College of Physicians, the CDC and the Institute of Medicine have recommended that means restriction be included in suicide prevention strategies,” according to a paper titled “Suicide, Guns and Public Policy” by Dr. E. Michael Lewiecki and Sara A. Miller, published in the January 2013 edition of the American Journal of Public Health. “In the United States, firearms are the most common means of suicide, with a suicide attempt with a firearm more likely to be fatal than most other means. In a study of case fatality rates in the northeastern United States, it was found that 91 percent of suicide attempts by firearms resulted in death. By comparison, the mortality rate was 84 percent by drowning and 82 percent by hanging; poisoning with drugs accounted for 74 percent of acts but only 14 percent of fatalities. Many studies have shown that the vast majority of those who survive a suicide attempt do not go on to die by suicide. A systematic review of 90 studies following patients after an event of self-harm found that only 2 percent went on to die by suicide in the following year and that 7 percent had died by suicide after more than nine years.”

Aside from handing out gun locks, Saturday’s event allowed representatives of the Victims Assistance Center and Dexter Police Department to promote firearm safety to children.

“The whole point is, whether you have guns in your house or not, your kids might go visit a house that does have guns,” Dexter Police Chief Christine E. Kennedy said in a story published Saturday by the Watertown Daily Times. “So you want them to be educated on gun safety, and you would hope that those people have their guns locked up as much as you would lock them up in your own house.”

We commend the Victims Assistance Center and Dexter Police Department for addressing the issues of firearm safety and suicide prevention. For more information about available resources, visit the website of the National Suicide Prevention Lifeline at wdt.me/ocdvV5.

The chance of any parent actually using their unlocked gun to protect their child is little to nil. The chance of a child being accidentally hurt and/or killed by an unlocked gun in the household is substantial. Mr. Sellers you demonstrate wisdom and love for your child.

Having a lock on a gun is like saying I’ll have time to put my seatbelt on before an accident!

Praise Mr. Sellers for being responsible and protecting his child.