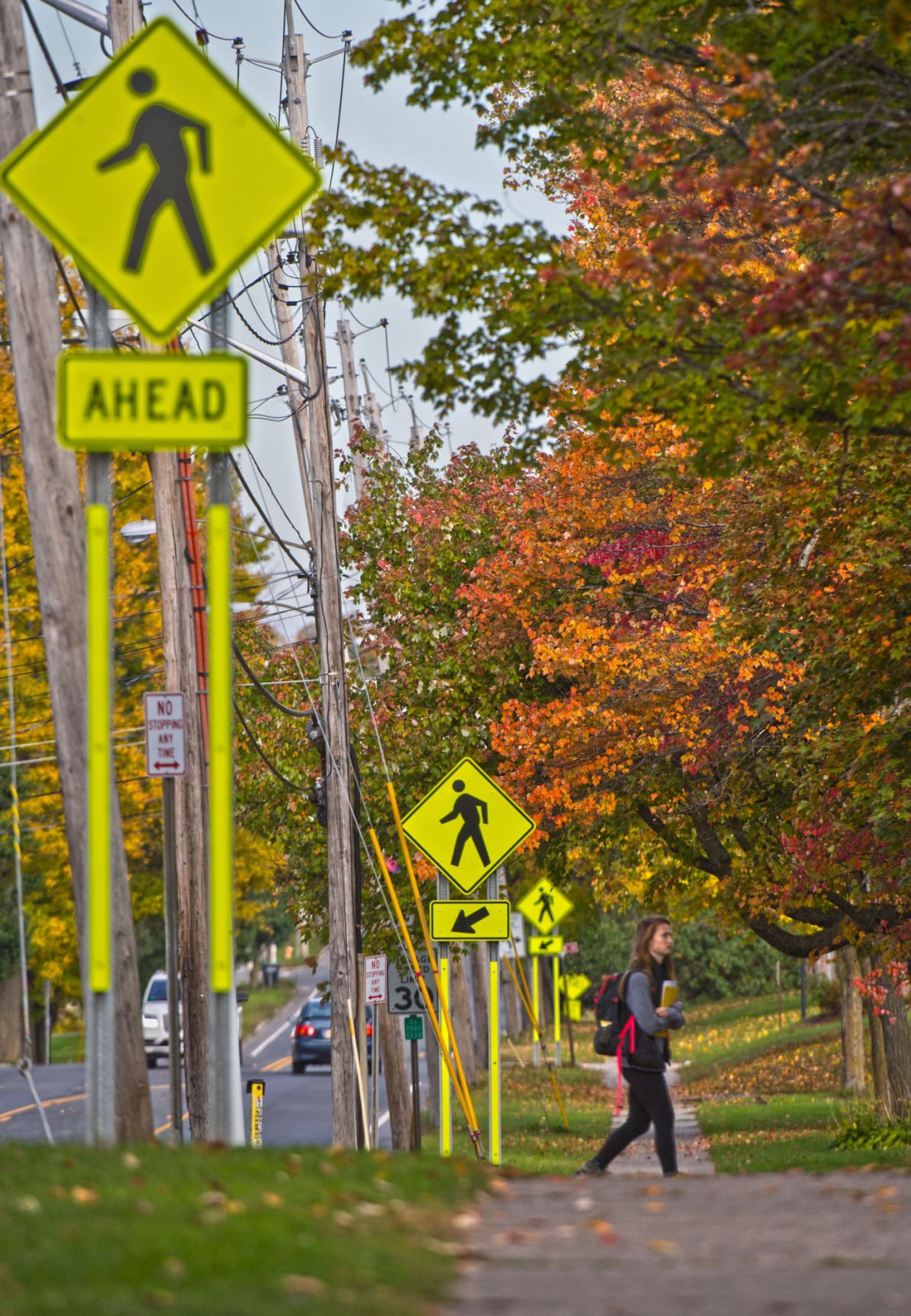 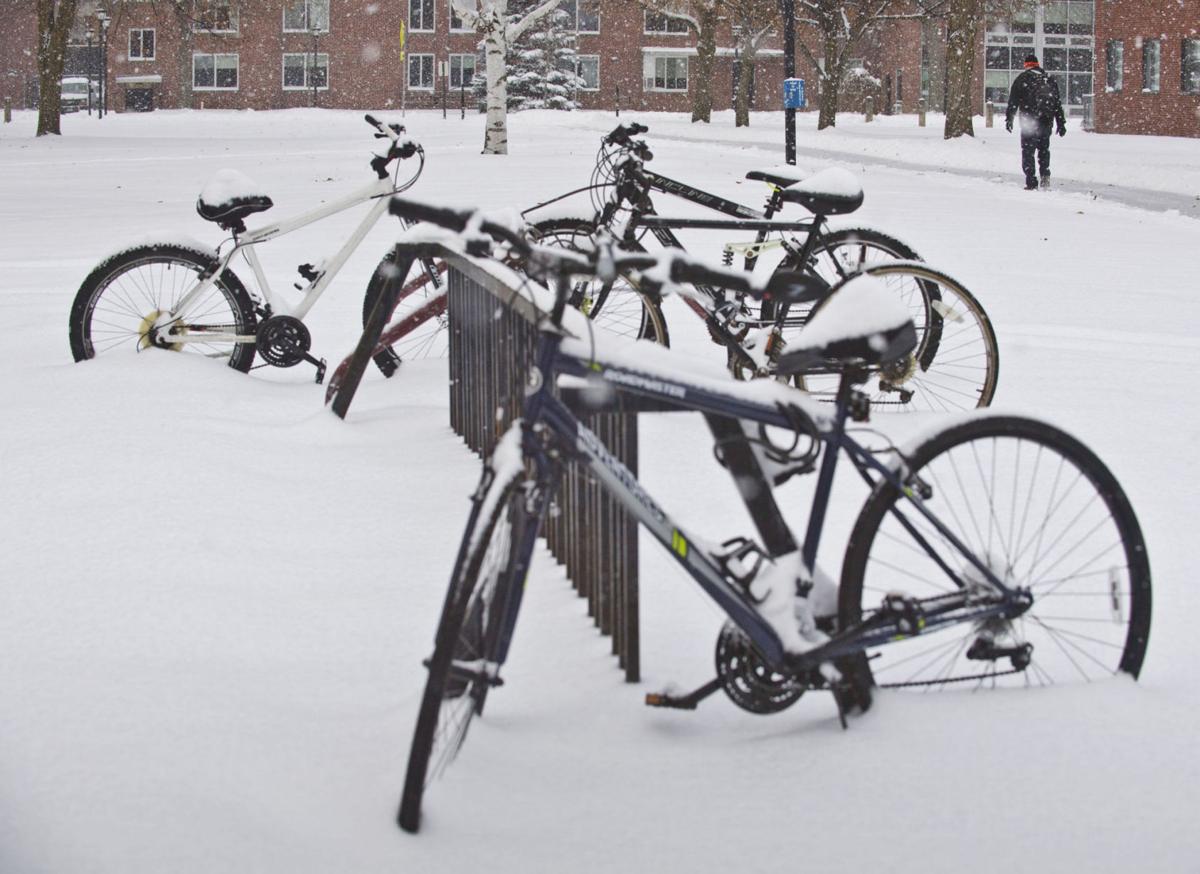 Bicycles, like these on the campus of SUNY Potsdam, aren’t of much use at the moment now that winter-like weather has set in. But the village has earned praise for improving transporation options for people who choose not to drive vehicles. Christopher Lenney/Watertown Daily Times

Bicycles, like these on the campus of SUNY Potsdam, aren’t of much use at the moment now that winter-like weather has set in. But the village has earned praise for improving transporation options for people who choose not to drive vehicles. Christopher Lenney/Watertown Daily Times

Representatives of Clarkson University in Potsdam graded the village an “A” for its efforts to accommodate pedestrians.

Erik C. Backus, director of the Construction Engineering Management Group at Clarkson University, and William Olsen, an instructor and geographic information system coordinator at the school, gave a presentation Oct. 7 to members of the Potsdam Village Board of Trustees. They discussed the condition of the community’s sidewalks and other pedestrian-used structures as outlined in a university study.

“The study, titled Sidewalk Inventory and Analysis for the Village’s Complete Streets Policy, was conducted by the Clarkson University Construction Engineering Management Consulting Group, with a goal of creating an inventory of the existing pedestrian structures within the village, including sidewalks, crosswalks, curb ramps, benches, streetlights and signal lights and buttons with a goal to support the village’s making the streets and sidewalks accommodating for all users. Mr. Olsen said the findings determined that 75 percent of the sidewalks were in excellent condition, in part because of all the replacement of curb ramps throughout the village as well as newly marked crosswalks,” according to a story published Oct. 11 by the Watertown Daily Times. “There were proposals to have sidewalks installed on Gilmore Street, a portion of May Road and on Maple Street across the street from Stewart’s at 26 Maple St.; additionally, the presentation displayed maps that were created with layers for each pedestrian feature with 41 of the 196 crosswalks suggested as needing replacement.”

The village adopted a Complete Streets policy in 2014. St. Lawrence Health Initiative Community Coordinator Karen Bage said this enabled her organization to work with members of the community to fund projects that improved pedestrian accessibility.

This included “$36,000 in grant money last summer that helped in sidewalk improvements and in obtaining the mobile traffic signal as well as a fixed speed radar unit,” the story reported. “Funding from the St. Lawrence County Health Initiative’s Creating Healthy Schools and Communities Program through the state Department of Health was also used for a Sidewalk Inventory and Analysis for the village’s Complete Streets Policy.”

There are many benefits to enhancing walkways. This portion of a community’s infrastructure connects people with essential points of destination without the need to use vehicles.

The physical exercise generated by walking or riding bicycles is certainly healthier than driving cars. This also reduces pollution and cuts back on greenhouse-gas emissions, which contribute to global warming.

The Complete Streets program encourages municipalities to keep pedestrians and bicyclists in mind when designing, repairing and maintaining roadways. Potsdam has shown that it is serious about fulfilling its pledge to implement this policy in an effective manner.

“There are 26 of these grants across the state. And once a year, each project is asked to submit a success story,” Ms. Bage said in the story. “This year’s success story from the St. Lawrence Health Initiative was about the pedestrian improvements in Potsdam.”

Mr. Backus and Mr. Olsen told Potsdam Village Board members that they will upload the findings of their study to the Development Authority of the North Country through an Internet Mapping Application. They also will help develop a sidewalk improvement plan.

In addition, they’ll give a presentation during the North Country Active & Healthy Transportation Network workshop Tuesday at Clarkson University’s Cheel Campus Center Barben Rooms. The free event is open to anyone interested in transportation issues affecting Northern New York. This will allow Mr. Backus and Mr. Olsen to spread the good news about what’s going on in Potsdam.

Anyone who walks is unwittingly supporting the communist mandate represented by the institution of public sidewalks, depriving property owners of full control of what they own. Furthermore, it's collectivism, because you aren't doing your part to support the economy by spending money on all the expenses related to cars. It's a sign that you're low class and probably can't afford a car, or maybe you aren't allowed to drive because you're an alcoholic. If I'm a real person and I'm in a car I'm better than you peasants on foot, you troublemakers. Also, I can see you, what you're wearing and what you're face looks like: it's indecent; people should be properly hidden in vehicles or buildings. Also, some people aren't able to walk. How do you think they feel seeing you walking around without mechanical assistance? Nobody should do anything that everybody can't do, or at least they should do it in private.