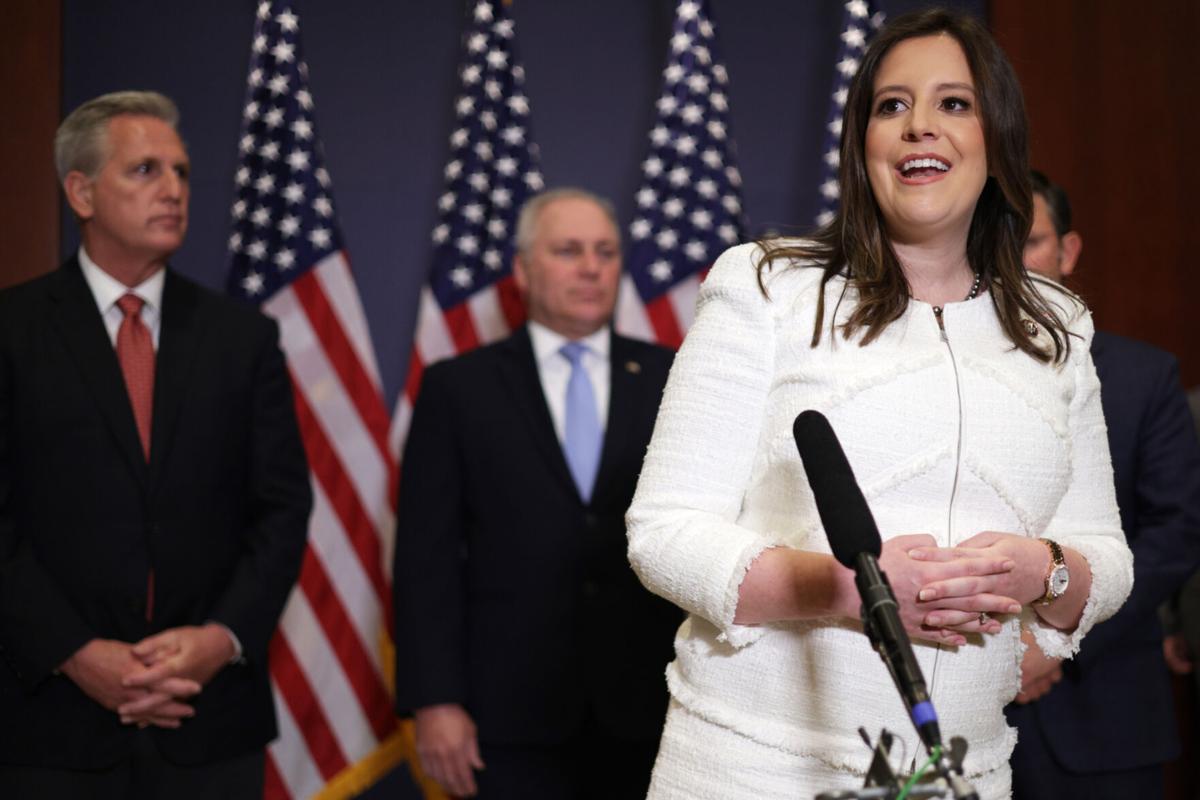 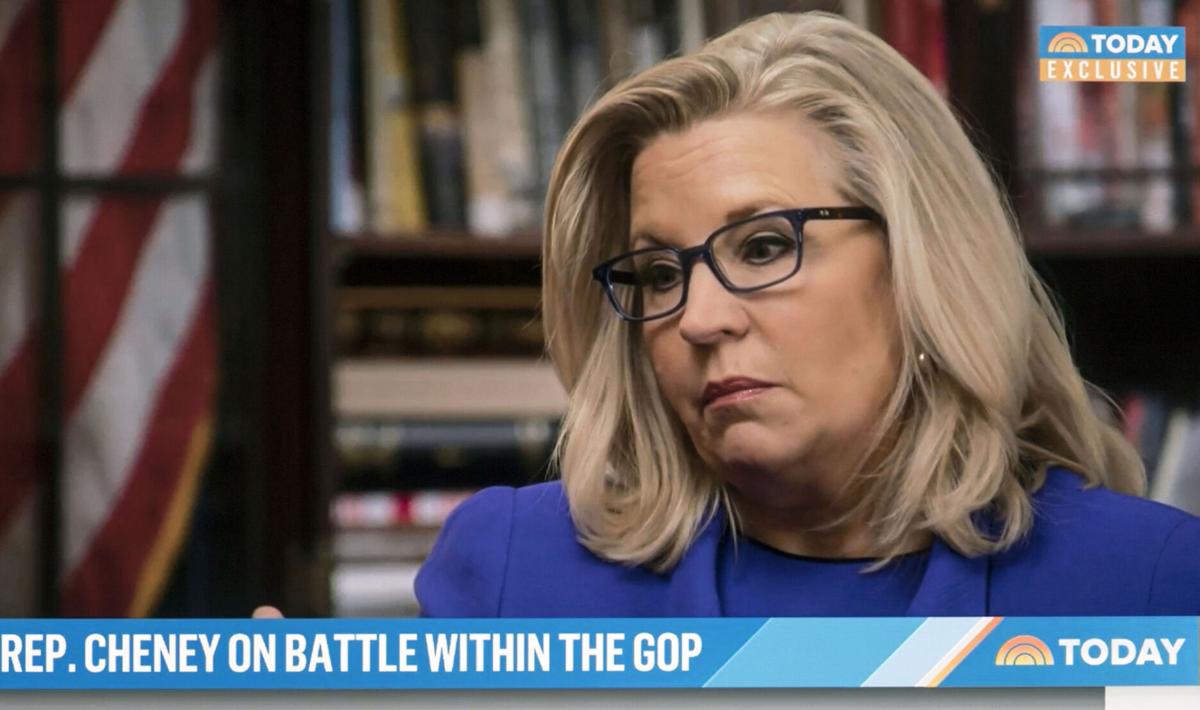 U.S. Rep. Liz Cheney of Wyoming was voted out of her House Republican leadership position for bucking former President Trump by speaking the truth about the results of the 2020 presidential election. NBC/Today/Zuma Press/Tribune News Service

U.S. Rep. Liz Cheney of Wyoming was voted out of her House Republican leadership position for bucking former President Trump by speaking the truth about the results of the 2020 presidential election. NBC/Today/Zuma Press/Tribune News Service

Stripping U.S. Rep. Liz Cheney of her leadership position is a sad day for the Republican Party and for democracy. Rep. Cheney, the sole member of the House of Representatives from Wyoming, was moved to the back bench because she believes in the rule of law rather than mob rule.

Last fall, Donald J. Trump lost the presidency while the Republican Party essentially won the election. The American electorate turned him out, explaining that it was not particularly enthusiastic for the style of his presidency. However, those same voters delivered more Republicans to seats in the House and state legislatures.

That victory was tarnished by Mr. Trump’s allegations that victory had been stolen from him. He delivered a damaging message in the state of Georgia where the two Republican senators had won pluralities in the November ballot.

However, those pluralities did not meet Georgia’s requirement that elections be decided by more than 50% of those voting. The required runoff election was marred by Mr. Trump’s rants about stolen elections and votes. Voters turned their backs on him and the election, which would decide control of the U.S. Senate.

Unfortunately, Congresswomen Elise M. Stefanik bought into Trump’s stolen election charade. She had ably represented her constituents and her political party with her aggressive stance during the first Trump impeachment proceedings.

She did not leave it there. Instead, when voters spoke on Election Day and when not one of multiple court cases charging election fraud was sustained, Rep. Stefanik still took Trump’s bait and perpetuated the myth of a stolen election.

Rep. Cheney did not accept the Trump assertion and expressed great concern for the future of the Republican Party and democracy. The virtue of this great country has been peaceful elections and the smooth transition of power between differing political factions.

Then came the Jan. 6 attack on the U.S. Capitol by an unruly mob who were encouraged by the president. And Ms. Stefanik continued to question the legitimacy of some members of the Electoral College.

Ms. Cheney stood up to the Trump wing of her party and articulated the value of our democratic process. She looked forward to a Republican Party of moderate views to act as a loyal opposition — something the extremists in the party refused to accept.

Rep. Stefanik, whose political persona has changed since she was first elected to Congress, immediately become an ardent opponent of Rep. Cheney and has now taken over Ms. Cheney’s leadership position for the Republican Party in the House of Representatives.

And she has succeeded. Several of the candidates she nurtured were elected in this last election, helping in part narrow the Democratic majority in the House.

There also are consequences for political ambition. Ms. Stefanik’s continued attacks on Gov. Andrew M. Cuomo may have resulted in her congressional district being on the short end of executive actions by the governor. Just recall the closure of the Dry Hill prison.

Now as she rises in the GOP hierarchy state Democrats who control the reapportionment process have the north country congressional district in their aim. They seem to be salivating over the prospects of cutting the north country into multiple pieces and divvying it up among other congressional districts. State Democratic Party chair Jay Jacobs is quoted by City and State Magazine that is not the case but he left the door wide open, referring to such a notion as “Simply a hope — for now.”

It is easy to envision that the district that houses Fort Drum and nearly the entire state border with Canada could be divided into pieces. Look at the creation of the river district to enhance the election of a Democrat to the state Assembly.

The north country’s most important government asset — Fort Drum — could easily be in a congressional district including Utica and Rome while the city of Watertown could be in a district beginning in Syracuse and the resort communities along the St. Lawrence and Lake Ontario could be part of Rochester district.

While Ms. Stefanik espouses anti-democratic politics in Washington, her constituents are left fearing not only for the strength of their democracy but their loss of representation in Washington, which is critical to our future.

There is always hope that Ms. Stefanik will turn her back on Donald Trump and promote efforts to reinvigorate the Republican Party.

The north country needs to understand just what she has in mind — democracy or anarchy.

Good lord...these hit pieces are so absurd, so devoid of fact...it would be like saying Joe Biden is purposely letting illegal immigrants into the country...most notably Texas with Covid to help spread it. Same thing. These newspapers just don't get how insignificant their "opinions" have become. Thankfully, our voters know better and we have been rewarded with a VERY high ranking official with a history of voting her own way. The statistics prove it. I challenge any democratic congress person to put their records of voting Republican on issues...because if they do it's all holy moly racist!!!! These hit pieces are sad, pathetic and not all based in fact.

i don't think there's much uncertainty that she's not on the side of democracy.

I've lost track of the number of Stefanik-editorials that are critical of her, including the one that endorsed her last fall. What most of them have in common is that they implore us to "hope." What a cliche, unoriginal and inappropriate request. Hope is completely ill-suited to the circumstances.

Better we give up our hope and longing for specific outcomes that are either unrealistic or, hopefully, representative of a different opportunistic persona.

The editorial board members cling to her and hope because they are codependents, emotionally and psychologically reliant on a bad partner that they're committed to propping up, hopefully.

Gotta love McCarthy tossing Katko under the bus on a deal that was negotiated at McCarthy’s direction for the commission on studying 1/6. I’d like to think Stefanik would stand up for her fellow NY rep, but I know better.

Good luck with that unity thing.

Hmmm, Eighty percent of self-identifying Republicans who were aware of Cheney’s removal as the number three in leadership supported the conference vote to remove her. 67% of Republican voters believe Biden is not the legitimate winner of the last presidential election. CBS poll. Once again the editorial board is spewing the msm line…

Stefanik and all the Trump enablers seem really short-sighted to me. At some point, they have to accept the temporary pain from casting him aside. As long as they can’t say that he lost, he controls them. He’s frozen the field for the presidential race in 2024 in the GOP. Sadly, a majority of the base is good with that.

Cheney, Kinzinger et al are experiencing political pain and risks to their safety now, but they’re free. They’re not trapped by the need to be subservient to Trump. I believe McCarthy’s dreams of being Speaker are probably 50/50. He’s the worst leader since some of those generals Lincoln fired during the Civil War. He and Stefanik have not been wise in making an enemy of Liz Cheney and casting her into the wilderness where she can roam free and tell the truth to all those who have ears to hear.

Look behind Elise in the picture associated with this article, editors. Is Steve Scalise in the mob. Is Kevin McCarthy in the mob. Then, to imply that speaking the truth about this disgusting governor would make Elise responsible for the closing of our prison? You people are warped. Perhaps you are secretly salivating that this district will be broken up. Elise is a strong, principled leader who very much represents the majority of this district.