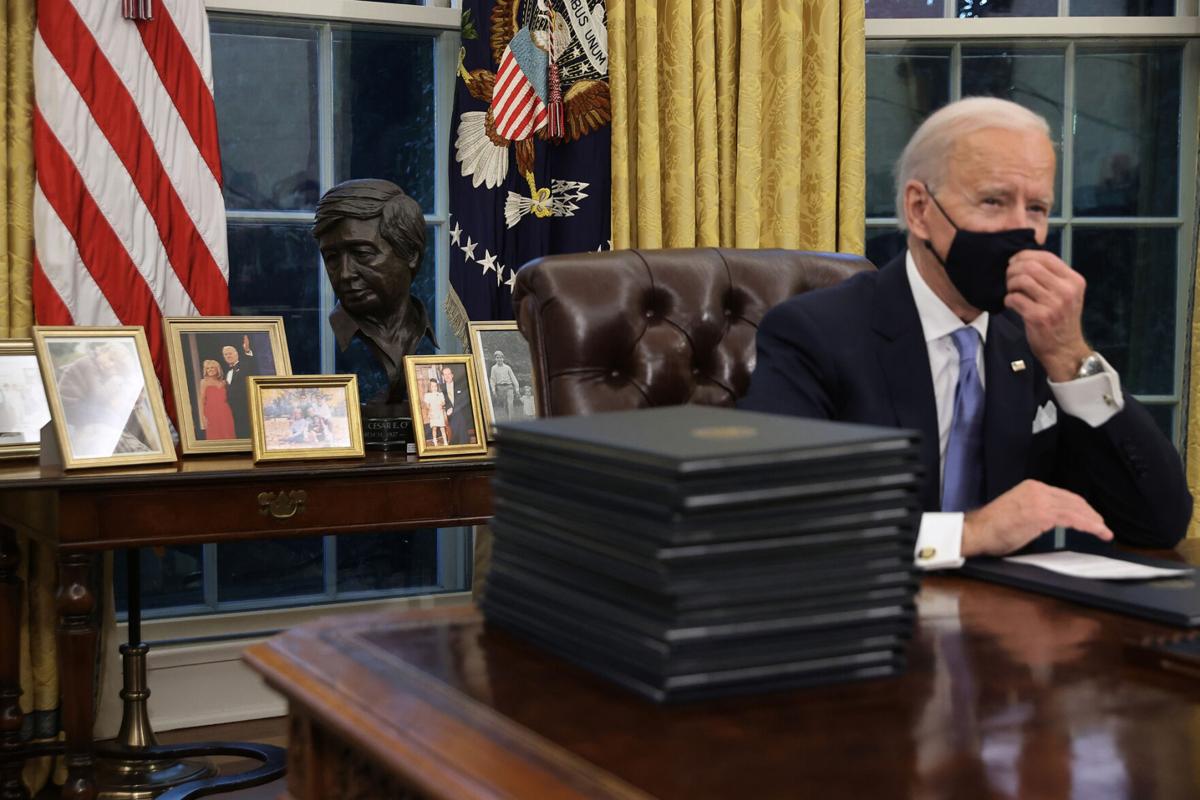 President Joe Biden prepares to sign a series of executive orders at the Resolute Desk in the Oval Office just hours after his inauguration Wednesday. Chip Somodevilla/Getty Images/Tribune News Service 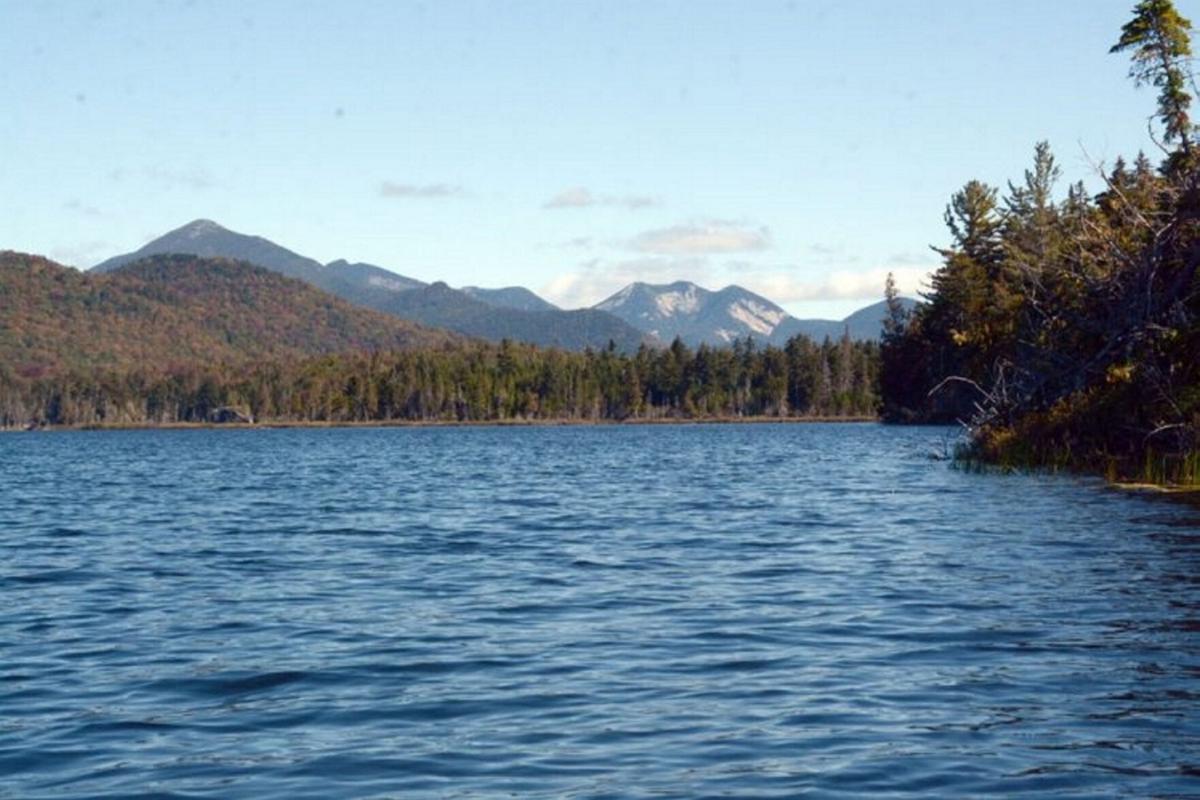 President Joe Biden prepares to sign a series of executive orders at the Resolute Desk in the Oval Office just hours after his inauguration Wednesday. Chip Somodevilla/Getty Images/Tribune News Service

In June 2019, the Environmental Protection Agency announced it would withdraw a rule put into place by former President Barack Obama to reduce carbon emissions produced by coal plants. The new EPA ruling offered states greater leeway in deciding what restrictions to place on these facilities.

Such policies don’t bode well for the environment. States hosting coal plants weren’t likely to toughen their regulations once money from the coal industry began flowing into the campaign coffers of elected officials.

Pollution doesn’t respect state boundaries. Emissions from one state will drift into another region, and the north country experienced a nightmare as a result in the form of acid rain.

Years ago, pollution from Midwest coal plants caused acid rain in parts of Northern New York. This severely harmed lakes throughout the Adirondack Park, greatly diminishing their stocks of fish.

Amendments passed to the Clean Air Act in 1990 limited coal plant emissions. The fish returned to the lakes once acid rain was reduced. Tests showed that the quality of the soil in the park also improved.

Biden signed executive orders Wednesday on “… Protecting Public Health and the Environment and Restoring Science to Tackle the Climate Crisis.” They require all executive departments and agencies to conduct an immediate review of actions, policies, regulations and guideline documents pertaining to environmental issues.

One objective is to create national standards for hazardous air pollutants. The president’s actions received the approval of the Adirondack Council.

“We are extremely pleased to see these important policy reversals happening on day one of the Biden administration,” Adirondack Council Executive Director William C. Janeway said in a story published Jan. 15 by WTEN-TV/News10 in Albany. “It gives us great hope that we can make real progress as a nation on issues such as climate change, smog and acid rain, all of which harm the Adirondack Park and its communities. Reversing executive orders is an important step, since it leads to immediate action. In some cases, however, orders will have to be followed up with legislation to ensure the next president doesn’t undo them. We urge the president to act quickly while he has a cooperative majority in both houses of Congress.”

Janeway is correct that this is an excellent start for the Biden administration. It’s important to work on problems that could result from previous policies.

But Janeway also has a valid point in the need to follow up on these executive orders with congressional action to turn these agency policies into law. It would be easy for a future president to reverse rules enforced by federal departments. Creating laws based on these regulations, however, would ensure the durability of Biden environmental goals.

We commend Biden for moving on this so quickly. U.S. Rep. Elise M. Stefanik, R-Schuylerville, and U.S. Sens. Kirsten E. Gillibrand and Charles E. Schumer, D-N.Y., need to take the lead on Capitol Hill to turn this policy objective into nationwide laws. It’s in the best interests of their constituents to protect the forests and waterways we’re privileged to have in Northern New York.

When the left rules fossil fuel burning always gets worse. The bi-product of fossil fuel burning is SMOKE. I guess the worst smoke belchers are coal burning electric generators. There was a time when I drove a tractor and pulled a shredder all around a coal burning generation plant in Fairfield, TX. The plant itself was in the center of hectares of grass a huge tube carried fumes into the air perhaps 50 or more feet straight up. They call these tubes smoke stacks and I guess the idea is to get the fumes from the coal burning far enough in the air to not spread over the town of Fairfield, TX. There may be chemicals inside the smoke stack that treat the smoke because by the time it gets to the opening 50 feet up it becomes invisible at least I while tooling around this plant shredding grass never saw any grey smoke exit the stack, honest never. I have to think science works in this case.

“Reverse the damage” give me a break! Trump did more in 4 years than Biden did in 50. How about Obama/Biden EPA and the Animas River? That’s real damage...

The climate crazies are being influenced by misinformation which is not allowed anymore. They believe we can reverse climate change and that man is THE cause. Where were they 20,000 years ago when the glaciers were melting for the third ice age. How did they melt without man present? The climate surely cannot change all by itself! They weren't worried then about global warming. Classifying climate change as a crisis gives them an excuse to wear away our civil rights. An excuse for power. Biden should be impeached.