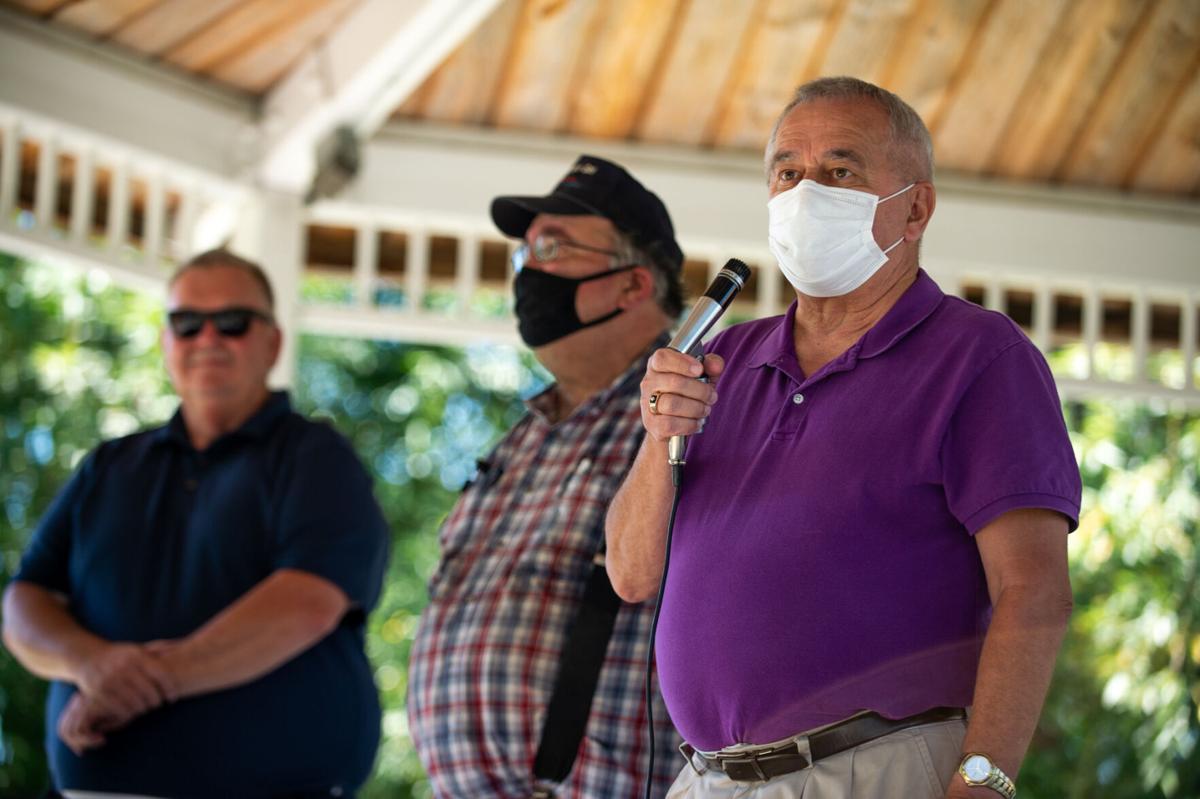 Potsdam Mayor Reinhold J. Tischler speaks Aug. 15 at a Back the Blue rally held in Ives Park in Potsdam. Mr. Tischler has emphasized his support of both first-responders and the Black Lives Matter movement. Kara Dry/Watertown Daily Times 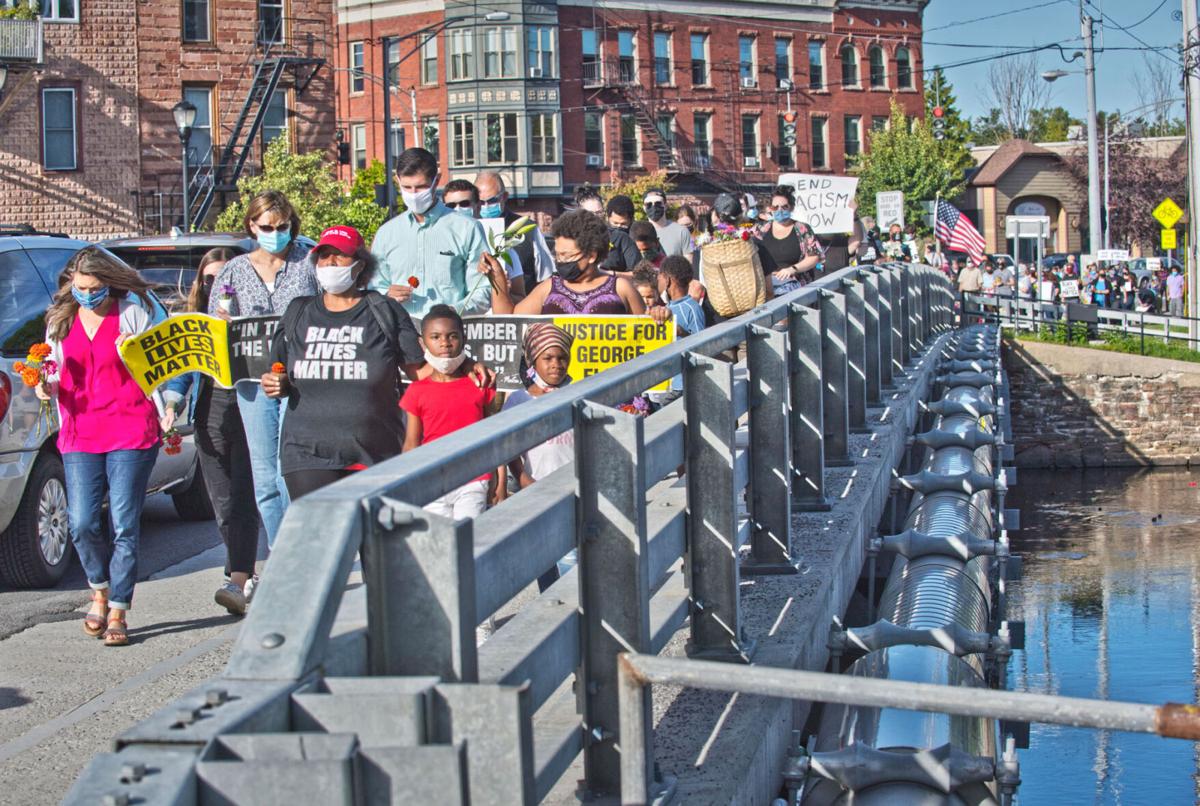 Supporters of the Black Lives Matter Potsdam group march Aug. 28 over the Maple Street bridge to commemorate the 57th anniversary of the historic 1963 March For Freedom on Washington. Christopher Lenney/Watertown Daily Times

Potsdam Mayor Reinhold J. Tischler speaks Aug. 15 at a Back the Blue rally held in Ives Park in Potsdam. Mr. Tischler has emphasized his support of both first-responders and the Black Lives Matter movement. Kara Dry/Watertown Daily Times

Supporters of the Black Lives Matter Potsdam group march Aug. 28 over the Maple Street bridge to commemorate the 57th anniversary of the historic 1963 March For Freedom on Washington. Christopher Lenney/Watertown Daily Times

More than a week ago, anti-police graffiti was found in Ives Park in Potsdam.

The letters “ACAB” were painted on several fixtures. They stand for “all cops are bastards.”

In a wise move, Mayor Reinhold J. Tischler issued a news release condemning the vandalism on behalf of other village officials. His statement reads as follows:

“In recent days, the village of Potsdam has responded to several reports of graffiti marring our shared public spaces. Troublingly, these tags included anti-policing messaging that we as a village find unacceptable. No matter the underlying message, though, we have any number of ways for our citizens to express your views — taking part in public demonstrations, speaking in meetings, writing letters and serving on committees, to name just a few. Leaving permanent ink on our treasured community facilities does not lead to any meaningful discourse. We continue to believe as a village that Black Lives Matter and will not let these incidents deter us from doing our part to unify our community. We do, however, take the defacement of public and private property very seriously and ask for the community’s help in finding the perpetrator(s) and reporting any graffiti promptly should you find it.”

It was good for Mr. Tischler to get out ahead of this disturbing incident with his statement. He reflected the sentiments of most in the village who find such a vulgar comment appalling.

It’s also good that representatives of Black Lives Matter Potsdam issued a statement of their own:

“BLM Potsdam, NY takes appropriate and positive actions to making good change in St. Lawrence County. So anyone supporting the changes we seek for black and brown lives is expected to also take appropriate actions and positive actions to making good change. Messing up property here is not going to have a positive outcome to the messages that BLM Potsdam, NY is fighting for black and brown lives every day. Use your voice; use your power; it’s within each of us. It’s how we use it that matters.”

It’s unfortunate that demonstrations opposing the deaths of Black Americans by police officers for very dubious reasons have become so divisive. For many people, it’s created a false choice between advocating for justice for Black people and supporting members of the law enforcement community.

This tension doesn’t have to exist. There are no contradictions in working to ensure equal justice for all and promoting a supportive environment for police officers across the country.

The Black Lives Matter movement is calling for necessary reforms in law enforcement, and this is appropriate. We should all work together to bring about positive changes that will address concerns about more perilous practices while highlighting what’s best about our police community.

We don’t know who left the graffiti in Ives Park or why this vandalism occurred. Whatever the motivation, expressing such public statements about police officers is egregious. They put their lives on the line every moment of every day to ensure our safety.

We’re pleased that village officials and Black Lives Matter Potsdam share common ground on the need to respect police officers and strive to make constructive endeavors. This mutual mindset is what will help bring about needed reforms while enabling members of our police departments to carry out their duties in the most effective manner possible.

The goals of the BLM organization go far beyond what most people think. “Trained Marxist” to quote one of the founders. The taunting and racist chants toward the police by BLM demonstrators and a police department caters to the group? Nothing but a sign of weak leadership. People need to read beyond the slogans and the innocuous sounding media accounts of the movement.

ah, the latest entry in holmes's long line of plagiarized comments. what does it say about a person when they are repeatedly mindlessly copying others' words?

Baseless? Read their website. I believe blm but when you capitalize it, I'm out. I'll go back to my cisgender, paternal, nuclear family home.

BLM doesn't care about black lives. Don't buy into it. It's about power and wealth. They say "If this country doesn't GIVE us what we want then we will burn down this system and replace it." Why do you think gun sales are through the roof? Maybe more people want to target shoot or go hunting I guess. Or maybe those people are not going to let the system burn and they become victims. Politicians do not have the courage to call out Marxists and what they stand for. Instead they want to appease them. It's the politically correct thing to do or you could be labeled a racist. As we all know, appeasement of violent aggression has always worked out for the best.

I feel sorry for you charlie, I really do. [sad] I guess even more so those who are affected by your attitude about this. I hope your kids can see thru this.

What a pathetic statement you make, rockloper. You "feel sorry" for Charlie. What a joke. Thats nothing more than one of your personal digs when you don't have anything substantive to say. And leave the man's children out of it!

The phrase "Black Lives Matter" can refer to a Twitter hashtag, a slogan, a social movement, a political action committee, or a loose confederation of groups advocating for racial justice. As a movement, Black Lives Matter is grassroots and decentralized, and leaders have emphasized the importance of local organizing over national leadership. Activist DeRay McKesson has commented that the movement "encompasses all who publicly declare that black lives matter and devote their time and energy accordingly."

In 2013, Patrisse Cullors, Alicia Garza, and Opal Tometi formed the Black Lives Matter Network. Alicia Garza described the network as an online platform that existed to provide activists with a shared set of principles and goals. Local Black Lives Matter chapters are asked to commit to the organization's list of guiding principles but operate without a central structure or hierarchy. Alicia Garza has commented that the Network was not interested in "policing who is and who is not part of the movement."

The loose structure of Black Lives Matter has contributed to confusion in the press and among activists, as actions or statements from chapters or individuals are sometimes attributed to "Black Lives Matter" as a whole. Matt Pearce, writing for the Los Angeles Times, commented that "the words could be serving as a political rallying cry or referring to the activist organization. Or it could be the fuzzily applied label used to describe a wide range of protests and conversations focused on racial inequality."--Wikipedia

If you are a parent or caregiver, how much has your children struggled with remote learning this year?