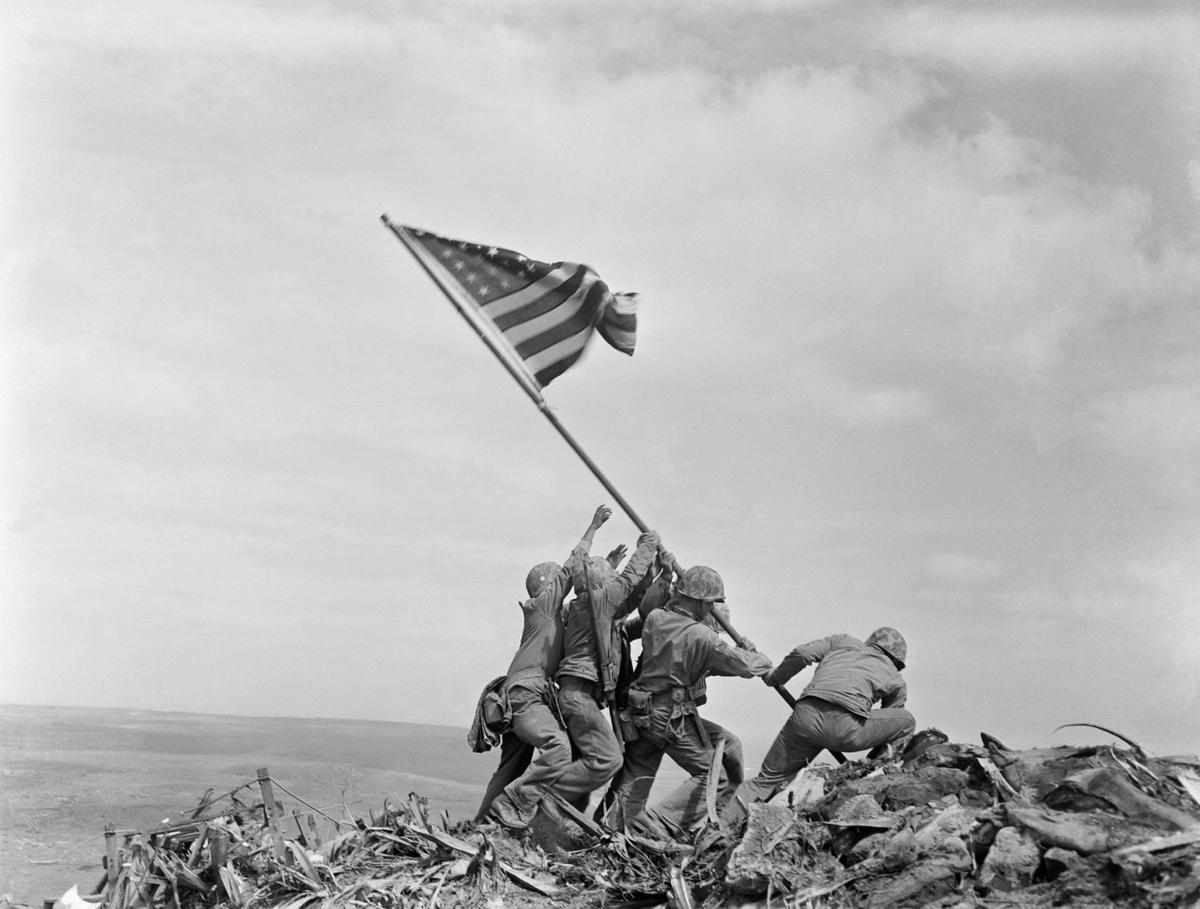 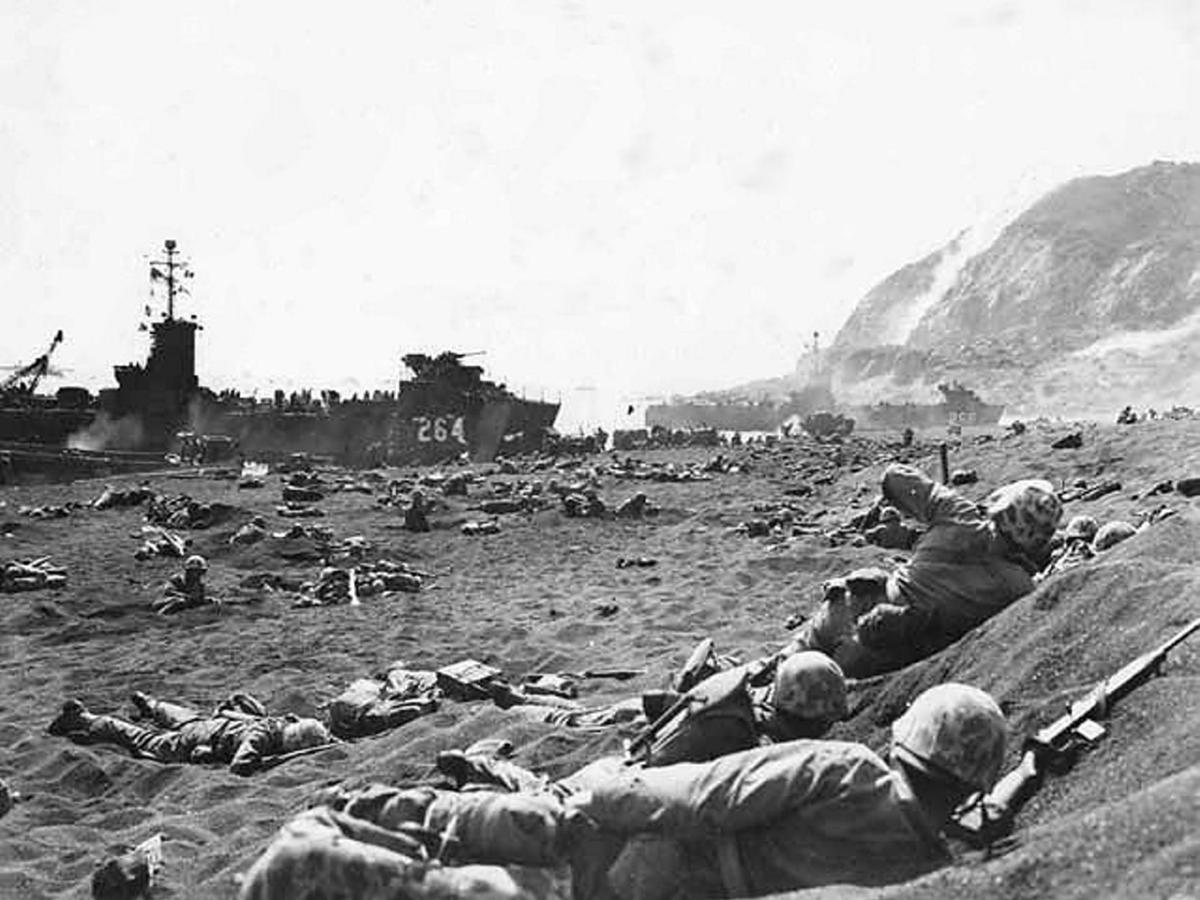 Marines burrow in the volcanic sand on the beach of Iwo Jima as their comrades unload supplies and equipment from landing vessels despite the heavy rain of artillery fire from enemy positions on Mount Suribachi in the background.

Marines burrow in the volcanic sand on the beach of Iwo Jima as their comrades unload supplies and equipment from landing vessels despite the heavy rain of artillery fire from enemy positions on Mount Suribachi in the background.

What the United States gained in the Battle of Iwo Jima was significant.

This was our first major victory on the Japanese home islands during World War II. Military officials planned on using Iwo Jima as a base for ongoing operations, although the island didn’t serve as vital a role as envisioned.

But what we lost in this conflict was profound as well. With 6,800 American troops killed and another 19,200 wounded, this was one of the bloodiest battles in the history of the U.S. Marine Corps. There were 27 Medals of Honor awarded, 22 of them to Marines and five to Navy sailors.

“The Battle of Iwo Jima represented to the Americans the pinnacle of forcible entry from the sea. This particular amphibious assault was the ultimate ‘storm landing,’ the Japanese phrase describing the American propensity for concentrating overwhelming force at the point of attack,” according to an article written by Joseph Alexander and posted Feb. 17, 2018, on the website for Military Times. “The huge striking force was more experienced, better armed and more powerfully supported than any other offensive campaign to date in the Pacific War. Vice Admiral Raymond A. Spruance’s Fifth Fleet enjoyed total domination of air and sea around the small, sulfuric island, and the 74,000 Marines in the landing force would muster a healthy three-to-one preponderance over the garrison. Seizing Iwo Jima would be tough, planners admitted, but the operation should be over in a week, maybe less.”

This estimate of how long the conflict would last didn’t go according to plan. The Battle of Iwo Jima took more than a month — Feb. 19 to March 26, 1945 — for the Americans to win.

Wednesday marked the 75th anniversary of this epic victory. It was a crucial bright spot for Allied forces as they looked for a sign that World War II was nearing an end.

American troops faced some of the fiercest fighting on Iwo Jima. The battle demonstrated the determination of the Japanese military to defend its homeland at all costs.

Reflecting on what had transpired, Navy Adm. Chester W. Nimitz said: “The battle of Iwo Island has been won. The United States Marines by their individual and collective courage have conquered a base which is as necessary to us in our continuing forward movement toward final victory as it was vital to the enemy in staving off ultimate defeat. By their victory, the 3d, 4th and 5th Marine Divisions and other units of the V Amphibious Corps have made an accounting to their country which only history will be able to value fully. Among the Americans who served on Iwo Island, uncommon valor was a common virtue.”

The graphic of Marines raising the U.S. flag on Mount Suribachi became one of the most legendary images of the war. Ironically, this shot symbolizing the U.S. victory was taken Feb. 23, still early in the battle.

“Mount Suribachi, its defenses fatally weakened by the fire-support ships during the early stages of the assault, fell early to elements of the 28th Marines on D-plus-4,” the Military Times story reported. “Associated Press photographer Joe Rosenthal captured the achievement with his classic photo of the second flag raising — truly a magical moment — but the battle still had a bloody month to run. The troops in their attack positions down below cheered when they saw the Stars and Stripes, then continued their swing to the north.”

There were more conflicts for Allied forces in Europe and the Pacific before World War II ended. But the U.S. victory in the Battle of Iwo Jima gave everyone hope that global peace was finally within sight.

Great article... and reminder... it's the hero's in this article who are still with us that are the most vulnerable for Covid 19... and all you're being asked to do is stay home.. not land on a beach...not take a hill...or bunker... What's that say about our generation.... Shame on us..

Fake "Holmes" are you speaking for yourself?

Holmes - so show some support for both parties until this mess is over.. Ask others to do the same... Whether it's Cuomo or Trump... pray that they lead us, the state, the country and world through this mess... You'll have time for your rants once we're past this.. until then, try supporting America, all of it..

Are you eager to visit a hair salon or barber now that the region has entered Phase 2 of reopening?