PROVIDED BY ROBERT NELSONOswego High School products (from left) Dan Doviak, Derek Kohut, and Carson Colucci pose for a photo after a box lacrosse game with the Onondaga Redhawks. 2017 Oswego graduate Nate Schultzkie, not pictured, also played for the team this season. 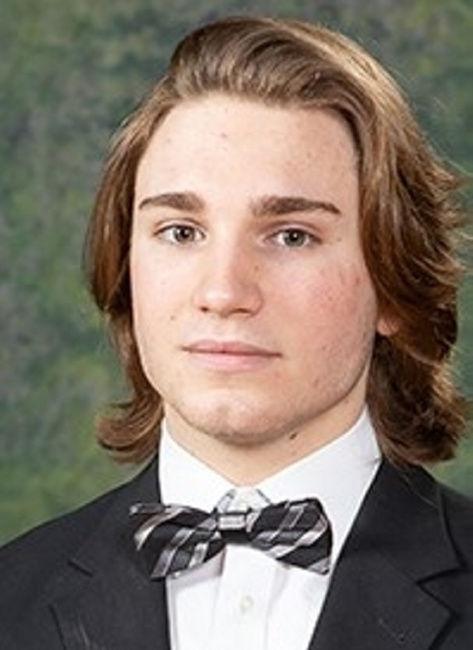 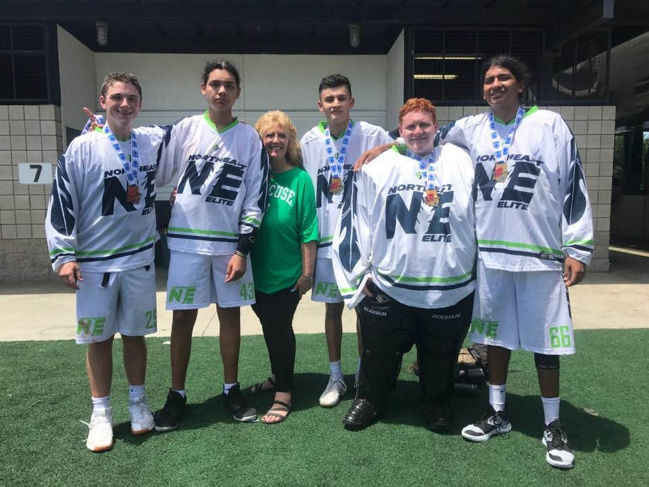 PROVIDED BY ROBERT NELSONOswego High School senior Carson Colucci (left) poses with other members of the Onondaga Redhawks that played for the NE Elite club team that won the US Box Lacrosse national championship on Aug. 4 in Huntington Beach, Calif.

PROVIDED BY ROBERT NELSONOswego High School products (from left) Dan Doviak, Derek Kohut, and Carson Colucci pose for a photo after a box lacrosse game with the Onondaga Redhawks. 2017 Oswego graduate Nate Schultzkie, not pictured, also played for the team this season.

PROVIDED BY ROBERT NELSONOswego High School senior Carson Colucci (left) poses with other members of the Onondaga Redhawks that played for the NE Elite club team that won the US Box Lacrosse national championship on Aug. 4 in Huntington Beach, Calif.

Schultzkie joined the Onondaga Nation Redhawks three years ago after talking to Nelson, and said he appreciated the fast-paced and hard-hitting environment in the unique setting, and was eager to share that experience with his former Buccaneers teammates that joined him this summer.

“Ever since I went down three years ago, I’ve loved the game and love the people, and I just kept going back,” Schultzkie said.

“It was something special to bring that type of knowledge and that level of respect for the game to the guys I grew up with,” he added. “It gives them a different perspective on the game and allows them to develop their skills. It’s just a cool feeling because we’re doing what we can to better their program, but at the same time we’re bettering ourselves as lacrosse players and developing and expanding our knowledge of the game.”

The Oswego quartet contributed to the Redhawks finishing second overall in the First Nations Junior B League that ended in late July, taking the perennial power Seneca Warchiefs to a decisive fifth game in the best-of-five championship series before falling to end their season.

The Redhawks beat the Warchiefs, 12-10, during the championship series to hand Seneca its first loss in four years. Onondaga Nation finished one game shy of reaching the prestigious Founder’s Cup in Winnipeg, Manitoba, Canada, which is recognized as the North American national championship tournament for Junior B lacrosse.

“We’ve always had a good team and always brought good competition to the league, but to have the guys come together as well as they did and for our coaching staff to really step up to the plate, and mainly it was just all the guys showing up to every practice and every game to put our best foot forward,” Schultzkie said. “To have the success that we did and to beat the Warchiefs in their arena was a feeling like no other.”

The league features a 30-second shot clock and there is no out of bounds and thus less stoppages in the condensed box setting, leading to a much faster style than traditional field lacrosse. Punishing physicality is another defining characteristic of box lacrosse on the reservation, according to the Oswego players who have experienced it first-hand.

“It was kind of crazy, even my first practice I was just like: ‘Holy lord,’” Colucci said. “It’s such a fast pace and it’s much more physical than field lacrosse. I even saw, comparing the box lacrosse at Onondaga to what we saw playing (in California), box with the Onondaga Redhawks is probably some of the most physical lacrosse that is played anywhere. … It’s basically just, you hit as hard as you can.”

Doviak added: “You have to adjust a lot, it’s a different type of game style. … The whole atmosphere was pretty cool. I think the speed was one of my favorite parts of playing and the physicality, it was a lot of fun.”

Each player also described a newfound appreciation for the tradition of their favorite sport after being immersed in the Onondaga Nation Redhawks culture. Oswego players drove an hour to each practice, which were held at least three days per week, and the season lasted from early May to late July.

They learned about the game and its native origins from their peers who have largely played together since the age of four, and many of their fathers and grandfathers on the Onondaga Nation that also played since they were toddlers.

“There are a lot of people there who have grown up playing the game their whole lives,” Schultzkie said. “They view the game differently than we do so for them to share some of their respect and appreciation for the game with us, it really makes it special and I’m really honored that they take the time to share that knowledge with you.”

Nelson recalled one of his Oswego players joining the Redhawks in the late 1980s and said he has been suggesting it to others ever since. While there have occasionally been players that try out for the prestigious squad, this year marked the largest Oswego representation on the team.

“I just saw how much better they got and how quickly that happened,” Nelson said. “The learning curve is almost indescribable. If you want to get better at lacrosse, you go to Canada or you get hooked up with a team on the reservation. … It’s one of those things that if you can handle those games, then you can play just about anywhere else because of the speed, the contact, and it’s the nature of the game. You have to fight just to get open, you have to fight someone practically to get your stick free for 10 seconds hoping to catch a pass.”

Kohut and Doviak are set to begin their respective college careers at Mercyhurst and Roberts Wesleyan, respectively, while Colucci hopes to play in college but is undecided entering his senior year of high school. Schultzkie has two years of eligibility remaining for the Lakers.

Colucci’s season with the Redhawks also led him to the U.S. Box Lacrosse National Championship, where he helped the NE Elite team win the gold medal in the 18-and-under tournament on Aug. 4 in Huntington Beach, Calif.

The NE Elite finished 5-0 at the tournament and capped off the championship performance with a 9-8 overtime victory in the final after trailing, 8-4, with three minutes left.

“That was really cool,” Colucci said. “I got to meet a lot of new guys and it was quick bonding. The first game was kind of shaky but as we played we built quick team chemistry and it ended up being a ton of fun.”