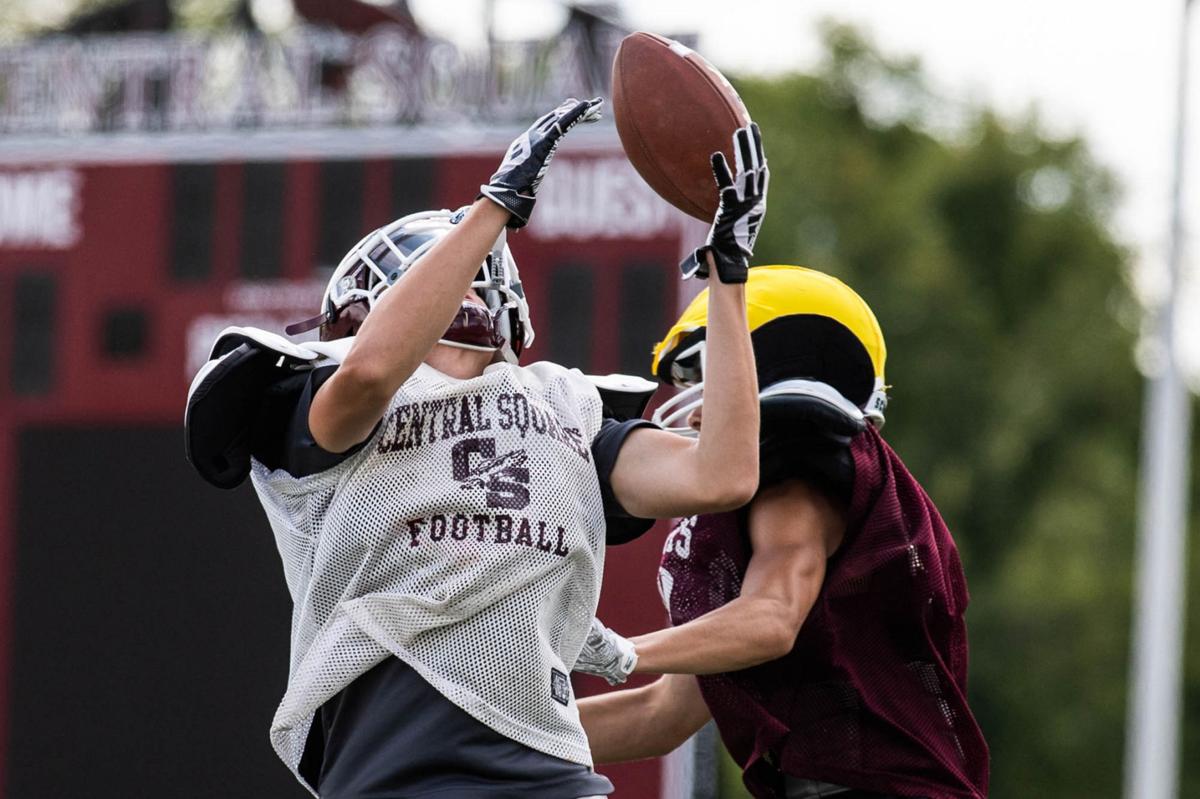 A Central Square player catches the ball in front of a teammate during practice in Central Square. Sydney Schaefer/Watertown Daily Times 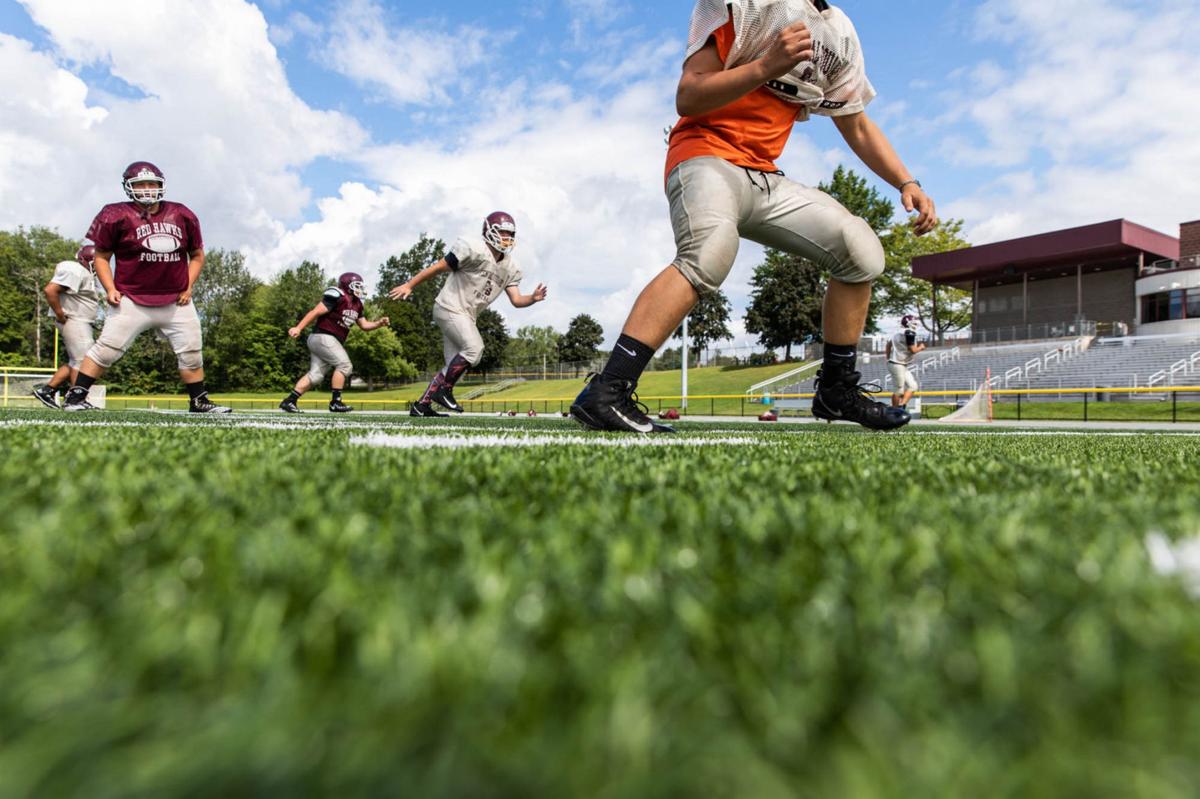 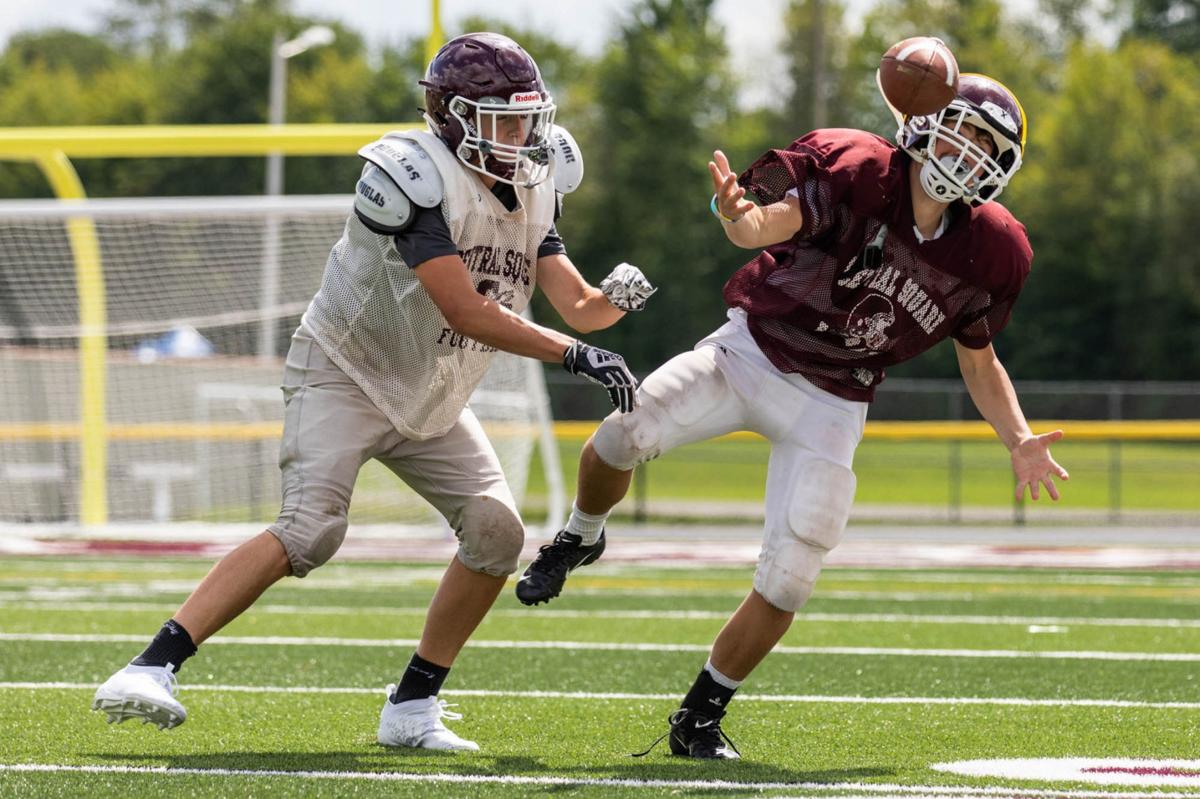 A Central Square player breaks up a pass to a teammate during practice Aug. 29 on the school’s turf field in Central Square. Sydney Schaefer/Watertown Daily Times

A Central Square player catches the ball in front of a teammate during practice in Central Square. Sydney Schaefer/Watertown Daily Times

A Central Square player breaks up a pass to a teammate during practice Aug. 29 on the school’s turf field in Central Square. Sydney Schaefer/Watertown Daily Times

CENTRAL SQUARE — Kevin Kalfass knows that his Central Square football team possesses high-end speed entering the upcoming season, and hopes that his young squad can also prove to be fast learners in order to contend in the grueling six-team Section 3 Class A Division.

The Redhawks are set to host Fulton in a nonleague game at 7 tonight to kick off Kalfass’ second season as head coach, while all other Oswego County 11-man high school football teams are scheduled to open their respective campaigns tonight and Saturday.

Central Square, coming off a 2-6 season that ended with a loss to Auburn in the Section 3 Class A playoff quarterfinals, lost a majority of its starters along the offensive and defensive lines and will look to its bevy of returning skill players to set the tone early.

“We have some really explosive running backs and we’re more of a speed team, so I’m hoping we can utilize that more than we did last year,” said junior Brady Godici, entering his first year as Central Square’s starting quarterback. “Last year we were big, we just had some of those big guys up front, but we’re faster this year and I’m hoping we can do something with that.”

Cruz Springer, a returning starter at wide receiver, added: “From every position, we can really just be fast and athletic, and beat out other teams with our speed.”

The Redhawks are aiming to build upon a strong finish to 2018, when they won their last two regular-season games to claim a postseason berth. That could prove to be an arduous task following the graduation of 28 players, and only three seniors on this year’s roster with a prior season of varsity experience.

“We’ll have a lot of juniors and sophomore coming up that will need to learn and get better,” Kalfass said. “There are a lot of unknowns. I don’t know how they’re going to perform when a game comes, everything depends on how they progress and get better.”

Senior wide receivers Cruz Springer and Alex Wurster will also provide speed threats on offense, and contribute heavily on defense off the edge and at linebacker, respectively.

Godici is set to take over under center for the graduated Nick Ransom, while a slew of juniors and sophomores will vie for the vacated positions in the trenches.

“I think as the season is going on my confidence is going to go up about our team,” Moran said. “It’s hard to know what we’re working with until we get against another team, but I think we’re going to compete. … We got a good class coming up and I really hope that we can just compete and really bring it to these teams.”

Kalfass and his returning veterans believe that a year of experience and added comfort in the former longtime Jamesville-DeWitt offensive coordinator’s system helped to accelerate the learning process during preseason training camp.

“Picking up the offense especially, coming into the second year running the same offense helps,” Wurster said. “The first year was a little rocky, we had to learn the basics and the fundamentals of this offense, but in the second year we know what we’re doing and where we’re going, so things are going a lot more smoothly.”

Godici, who started at cornerback last year and is one of several Redhawks’ returners likely to start on both offense and defense this season, added: “We definitely feel a lot more comfortable this year than last year. We can connect with him more, and he really just relates to the team more now that he’s been here, so we’re working hard for him and we like him.”

Central Square will contend with Indian River, Carthage, Whitesboro, Auburn, and East-Syracuse Minoa in the new condensed, one-division Class A setup following the departures of Fulton and J-D, each of which opted to join the Section 3 Developmental Division for the upcoming season.