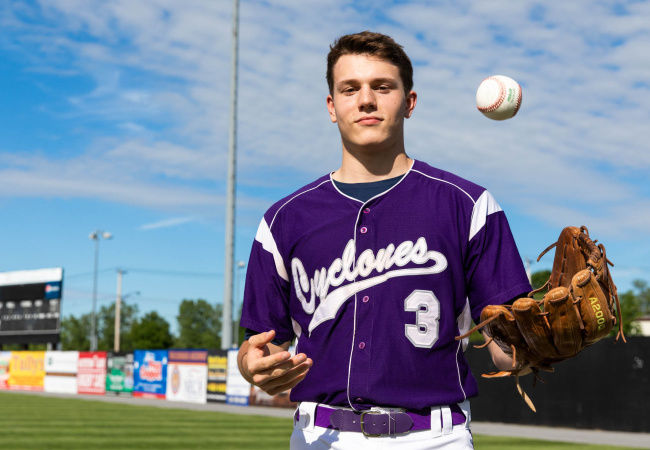 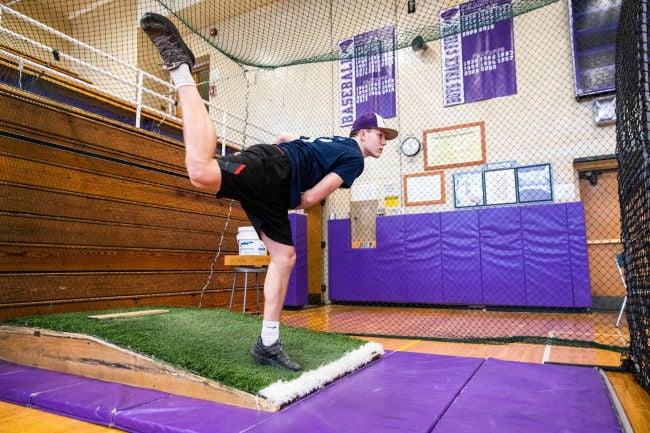 WATERTOWN — After a solid regular season, the Watertown baseball team immediately ran into a wall in sectionals. No. 4 Whitesboro shut out the Cyclones 3-0 and eventually went on to win the Section 3 Class A title.

But Watertown’s early exit wasn’t an utter collapse. While the offense couldn’t get going, Ryan Peters was dealing. The junior held the Warriors to only five hits and three runs.

“One of their best hitters, he made him look foolish,” Watertown coach Matt Covey said of Peters’ performance. It was one of Peters’ best outings of his Times All-North Frontier League MVP season.

“My change-up was a big pitch in that game,” Peters said. “They couldn’t figure out what I was throwing at times.”

Adding an effective change-up to his arsenal of pitches has elevated the right-hander on the mound. While he hasn’t been clocked this season, he believes his fastball runs in the low-to-mid 80s. According to Covey, mixing in a change-up makes the fastball appear five-to-eight mph faster.

Along with improving the accuracy of the newly developed pitch, Peters also worked on hiding it better.

“You have to keep your mechanics the same so the batter never knows what’s coming,” Peters said. That meant tossing the slowed-down pitch with the same over-the-top delivery of his fastball.

Little tricks like that have helped Peters dominate the strong Frontier League “A” Division these past two seasons. But they’re far from new.

“It’s something that I was naturally doing since I was a kid,” Peters said. “I never really got taught, I’ve kind of just done it.”

For the second year in a row he pitched to a sub one ERA at 0.88 with 43 strikeouts. But he’ll tell you that his success isn’t just a result of his talent or work, it’s also a result of who he’s throwing to.

Ryan Peters doesn’t throw to many catchers who aren’t Spencer Lavin. But when he does, he can immediately tell the difference.

Lavin can often predict what Peters wants to throw and will make sure to put that sign down.

“We’ve let Spencer call the game, him and Ryan, we don’t call the pitches,” Covey said. “We believe that’s how you learn to call the game, I know some coaches believe in calling it.”

Peters’ success on the mound has remained a constant in his time on varsity. But in order improve on his .321 batting average from last year, he needed to make some changes. It started with his load, because as Peters puts it, “baseball is more fun when you’re crushing the balls.”

He watched film of himself and of pro players such as Bryce Harper of the Philadelphia Phillies to help craft the new addition to his swing.

“I worked on creating separation between my hands and my stride when I swing, creating a better rubber-band effect with my body when I swing and I just started hitting better,” Peters said.

He didn’t necessarily have to change his stance despite adding the load. By turning his shoulder and adding a slight leg kick, he improved his average by more than a .100 points, finishing the 2019 season with a .455 batting average and 15 RBIs.

Much of the work came in the preseason; during his lunch breaks, his dad would sign him out of school and they’d go to the batting cage to hit. But even as the season went on, Peters continued to work at his swing.

Midway through the year he found himself continuing to ground out to shortstop, so he made adjustments. At the direction of his dad, Peters began dropping his elbow more when he swung in order to create more of a launch angle, therefore elevating the balls once he connected. As a result he went on a hot streak that carried him through the rest of the season.

He never really stops working on his swing, muscle memory allows hitters to make consistently good contact. When he’s home he’ll often pick up the bat that conveniently resides in his living room and work on his load, lifting his knee and making sure his hands are properly separated.

Peters hopes to play in college and has one more year left at Watertown to attract a coach’s attention. He also plans on attending a showcase in the fall.

“Sky’s the limit,” Covey said of Peters’ potential. “We’re going to push for .600, you never know in the league, that’s possible.”