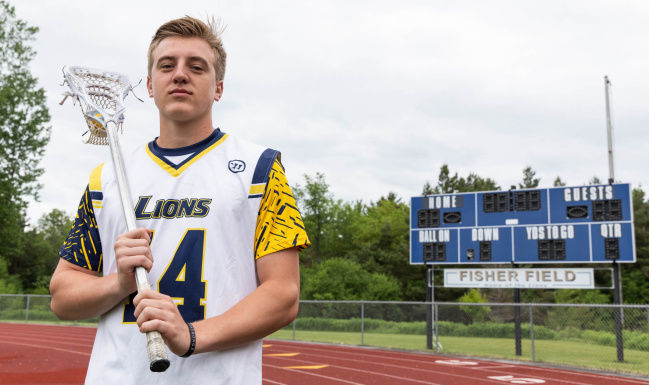 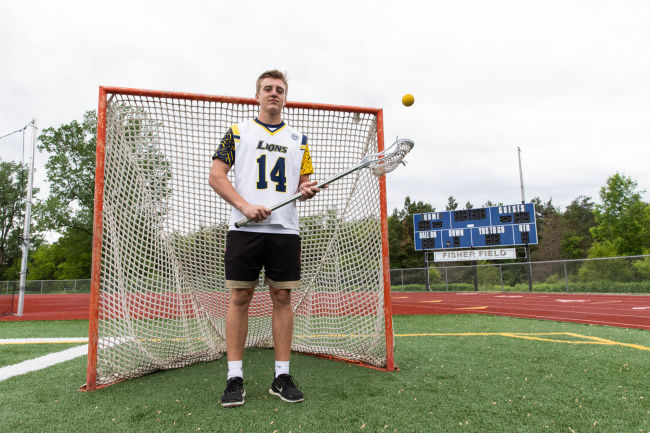 DEXTER — Bryce Johnson hails from a standout lacrosse family at General Brown, so it’s no surprise that he’s kept this tradition going.

Johnson, a skillful senior attackman also known for his leadership, finished his scholastic career as one of the most prolific performers offensively in Lions’ program history.

Johnson has been selected as the Times All-North Most Valuable Player for boys lacrosse.

Johnson’s older brother, Cole, starred at General Brown in lacrosse as did their cousin, Bryanna Fazio, for the girls lacrosse team, with both graduating in 2015.

“I think there are similarities, but there are differences as well,” General Brown coach Rich Purvis said of the two brothers. “It’s quite a lacrosse family.”

Now Bryce Johnson, who never played varsity lacrosse with Cole, has forged his own trail of success with the Lions in his four-year varsity career, also contributing to the program’s record books.

Johnson generated 99 points, including 46 goals this season — both career-season highs.

“It was a pretty good season,” Johnson said. “We didn’t accomplish all of our goals, but I’d say overall it was pretty successful and we had a lot of fun. It was a good way to go out.”

He also finished fourth in Section 3 in points this year and fifth in assists (53).

“I think Bryce is more of a complete package,” Purvis said. “He’s a great shooter, he has great vision, he’s very athletic and he’s faster than you think he is.”

Fittingly for Johnson, who excelled as a feeder as well as a scorer, he now ranks first all-time in assists with 156 at General Brown, surpassing Cole, the previous leader in assists (152). Bryce also stands third in points (283) and fourth in goals (127).

“He’s very good with both hands,” Purvis said of Bryce Johnson. “He’s a dominant righty player, but he’s just as good with his left hand. He’s a hard kid to figure out on the field, shifty. I think his lacrosse IQ kind of sets him above anybody else that we’ve had.”

However, more important to Johnson than just statistics was the Lions’ team success.

“It was good, it was successful,” Johnson said. “I wish we could have won more games. Statistically it was good, but the only thing I really care about is wins and losses.”

“Sometimes he’s a little too unselfish, but whatever it takes to make his team better, he takes a lot of that responsibility,” Purvis said.

Johnson was one of 13 seniors on this year’s team, which last season helped guide General Brown to its first Section 3 semifinal appearance in nearly a quarter of a century.

Last season, the Lions broke through by winning a Section 3 playoff game for the first time in recent years, went on to defeat Cazenovia in a semifinal game to reach their first sectional final since 1995.

General Brown went on to lose to Christian Brothers Academy in the Section 3 Class D title game, setting the stage for 2019.

“I would say the biggest thing I took from that is playing under pressure,” Johnson said of the team’s run in 2018. “Because last year there were some guys who were seniors who we had played with since like fourth grade and it was their last year and we didn’t want it to end for them. We were really playing for them. And this year it was us, just playing for our own career and just trying to fight until the end.”

The Lions won a sectional game on their home turf for the second consecutive year, outlasting Frontier League foe South Jefferson, 17-5, on May 18, but were later upended in the semifinal round in a 12-6 loss to Marcellus.

“It was really tough because when you go into those games you’re mindset is you’re there to win and advance,” Johnson said. “And if you don’t, then your season’s over and your high school career is over. So it’s pretty tough to lose those games because you just look back and say ‘what more could we have done.’ So that’s tough.”

This season, Johnson was again the focal point of the team offensively, but had a strong supporting cast.

“It’s really the guys around me who drive me,” he said.

Most of the team’s starters throughout the field were returners — including attackman Dominic Lutz and fellow co-captains Tre Coney and Carter Rosbrook in the midfield, defender Tyler Scordo and goalie Carson Pickeral.

“It’s been really fun,” Johnson said. “We’ve all been playing together since like third or fourth grade.”

Pickeral finished as the General Brown’s all-time leader in saves (572) and save percentage (.595).

“They’re our rock,” Johnson said of the senior class. “It’s really special, we all stuck with it and got to where we were. We’ll definitely take it.”

He was inspired by Cole, who went on to star at Manhattan College, and by Fazio at Le Moyne in the women’s ranks, with both graduating this year.

“I’m very close to him, he’s taught me a lot,” Bryce Johnson said. “He was a very good attackman, so I learned a lot from him just playing in the back yard and always being together. And watching him play — he’s just so smooth and everything he does is very technical. It makes you realize how much the fundamentals really matter.”

“I think their basic similarities are their work ethic and their determination,” General Brown assistant coach Chad Parker said of the Johnsons.

Bryce Johnson is looking forward to attending Mercyhurst in the fall. This year, the Lakers lost in the first round of the Division II NCAA Tournament to eventual national champion Merrimack.

“That’s going to be a lot of fun,” Johnson said. “I’m looking forward to getting there and competing and obviously going to school. They did really well this year, they won their conference and made it to the (NCAA Tournament), so hopefully we can get back there and make a run.”

Johnson hopes he and his teammates have left a lasting impact on General Brown.

“The ride that we had, from always losing in the first round to finally making a run and becoming something other than just the team from up north,” he added. “Now we’ve kind of made a name for ourselves I think for General Brown.”