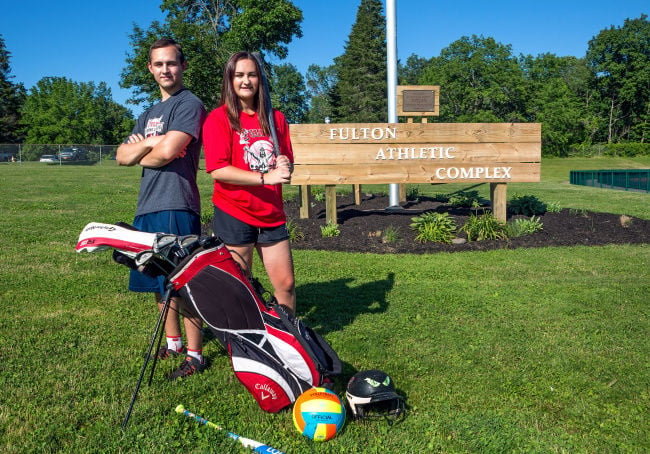 STEVEN J. PALLONEEan (left) and Camille Stevenson, twin brother and sister, pose at the high school after each graduating senior was honored as a Section 3 Scholar Athlete. 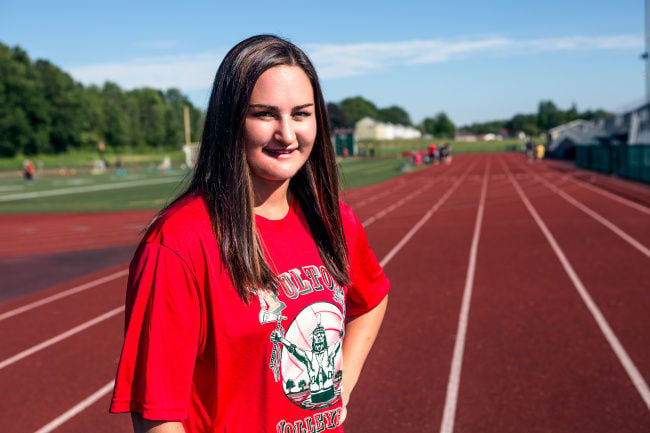 STEVEN J. PALLONECamille Stevenson poses after the graduating senior was honored as a Section 3 Scholar Athlete for her achievements as a three-sport athlete and standout student. 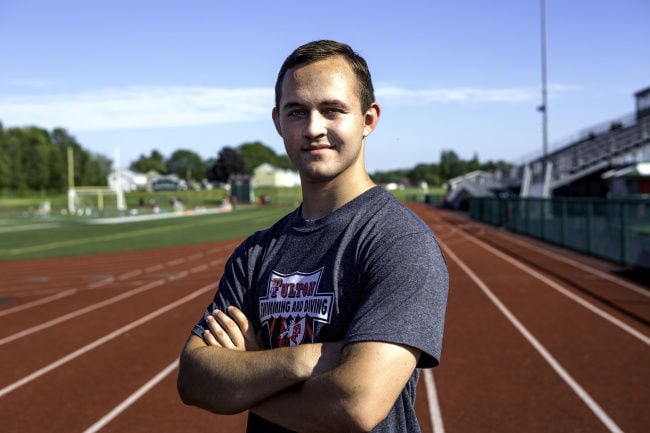 STEVEN J. PALLONEEan Stevenson poses after the graduating senior was honored as a Section 3 Scholar Athlete for his achievements as a three-sport athlete and standout student.

STEVEN J. PALLONEEan (left) and Camille Stevenson, twin brother and sister, pose at the high school after each graduating senior was honored as a Section 3 Scholar Athlete.

STEVEN J. PALLONECamille Stevenson poses after the graduating senior was honored as a Section 3 Scholar Athlete for her achievements as a three-sport athlete and standout student.

STEVEN J. PALLONEEan Stevenson poses after the graduating senior was honored as a Section 3 Scholar Athlete for his achievements as a three-sport athlete and standout student.

FULTON — Ean and Camille Stevenson estimated that they spent 90 percent of their respective G. Ray Bodley High School (GRB) tenures operating entirely separately from each other, but the twin brother-sister tandem ultimately flourished in similar fashion.

The Stevenson twins were each named GRB recipients of the Section 3 Scholar Athlete awards last month, recognizing their various contributions to the Red Raiders as three-sport varsity athletes while highlighting their academic achievements.

Camille Stevenson was also named her class valedictorian and made special mention of her twin brother during a speech at Fulton’s recent graduation ceremony. Ean also finished near the top of their class academically.

“There were lots of late nights studying after getting home from games or practices,” Camille Stevenson said. “It was nice to be recognized for playing three sports and also excelling at academics, a lot of people don’t understand the extent of being involved in many varsity sports and also being at the top of your class. Lots of people can do it but it’s just very hard to juggle your time and the time management skills are the key.”

Camille Stevenson thrived in volleyball, softball and swimming at Fulton, while Ean Stevenson shined in track and field, golf, and swimming, and also participated in varsity bowling as an eighth-grader.

The duo each said they were encouraged to try sports at a young age by their parents – Kenneth and Carolyn Stevenson – the latter of whom was also an active three-sport athlete at Fulton. Ean and Camille were each introduced to soccer around the age of five and have been involved in a variety of sports year-round ever since.

“I definitely enjoyed being able to communicate with other kids and have a good time, improve, and compete,” Ean Stevenson said of his Fulton athletics experience.

Camille Stevenson added: “I really think that’s good to be involved in your community and be a part of sports that can make you a more well-rounded person and develop those skills like teamwork and cohesiveness, which I’ve definitely learned those things. Sports have helped me learn to work in a group setting.”

The respective ambitious spirit of the twin brother-sister duo, combined with their natural sibling rivalry, has helped motivated each other to succeed.

Each was inducted into the National Honor Society and also took part in a plethora of other extracurricular activities at Fulton. Camille Stevenson participated math club, debate club, HOPE Club, Youth Create Change Coalition, Youth Court, Battle of the Books, and was a student mentor and a member of the school’s orchestra. She also plays the piano, works part-time as a lifeguard and joined travel softball and club swim teams at various points of her athletic career.

Ean Stevenson participated in math club, acted in various musicals and plays, swam for a YMCA club team and works a part-time job in the area.

“There are moments where we are definitely fighting because we’re competitive and we want to do so good, like academically we push each other and I mentioned that in my (valedictorian) speech, he definitely pushed me, and then in sports also, we push each other, especially in swimming,” Camille Stevenson said.

Ean and Camille Stevenson’s well-rounded schedules rarely overlapped, with the Fulton coed varsity swimming team serving as one of the few exceptions. The twin siblings were able to share in the triumph of the Red Raiders earning a share of the Section 3 Class B championship this past winter.

Ean Stevenson, who described swimming as his favorite sport, was part of the winning 200 medley relay team and 400 freestyle relay teams that helped thrust the Red Raiders into a first-place tie with Mexico for the Class B crown.

“My group of swim guys were the best group of friends I had throughout high school, and I also really love how physically and mentally challenging it was,” Ean Stevenson said. “You push yourself, there is no one physically going against you like wrestling or something, but you’re pushing yourself so that you can win against others.”

Camille Stevenson cited the swim team’s sectional win as one of her favorite sports moments at Fulton.

“When we heard that announcement, we just burst into applause,” she said. “I didn’t make sectionals this year (as an individual) but I was still able to support my team and go and watch, and you just get filled with euphoria.”

Camille Stevenson also helped the Fulton softball team reach the Section 3 Class A semifinals as a starting pitcher, guiding her team to an 11-6 overall record after recovering from a broken foot earlier in the year that forced her to miss most of her senior volleyball season.

“That was very frustrating because sports was a big thing and to not be able to do senior volleyball, but I was able to reflect on everything I’ve been doing and take a break on a lot of the things I’m involved with, so I was able to get a lot done with a broken leg,” Camille Stevenson said.

Ean and Camille Stevenson will each venture off to different colleges this fall. Ean Stevenson plans to attend Rensselaer Polytechnic Institute and major in engineering, while Camille will head to the University of Rochester to study neuroscience, focusing medical research on neurological disorders like Parkinson’s disease.

The twins will be separated by 234 miles during the upcoming school year, but each are eager for the challenge and believe the independent dynamic of their relationship has prepared each for their new journey.

“She kind of sticks to herself and I do my thing most of the time,” Ean Stevenson said. “ So I think it has kind of become our lifestyle and that will carry over to college.”

Camille Stevenson said: “We’re each our own person and we don’t need the other there to do well. We push each other and it definitely helps, but I think our own strength comes from within and from setting our own goals and expectations for ourselves.”