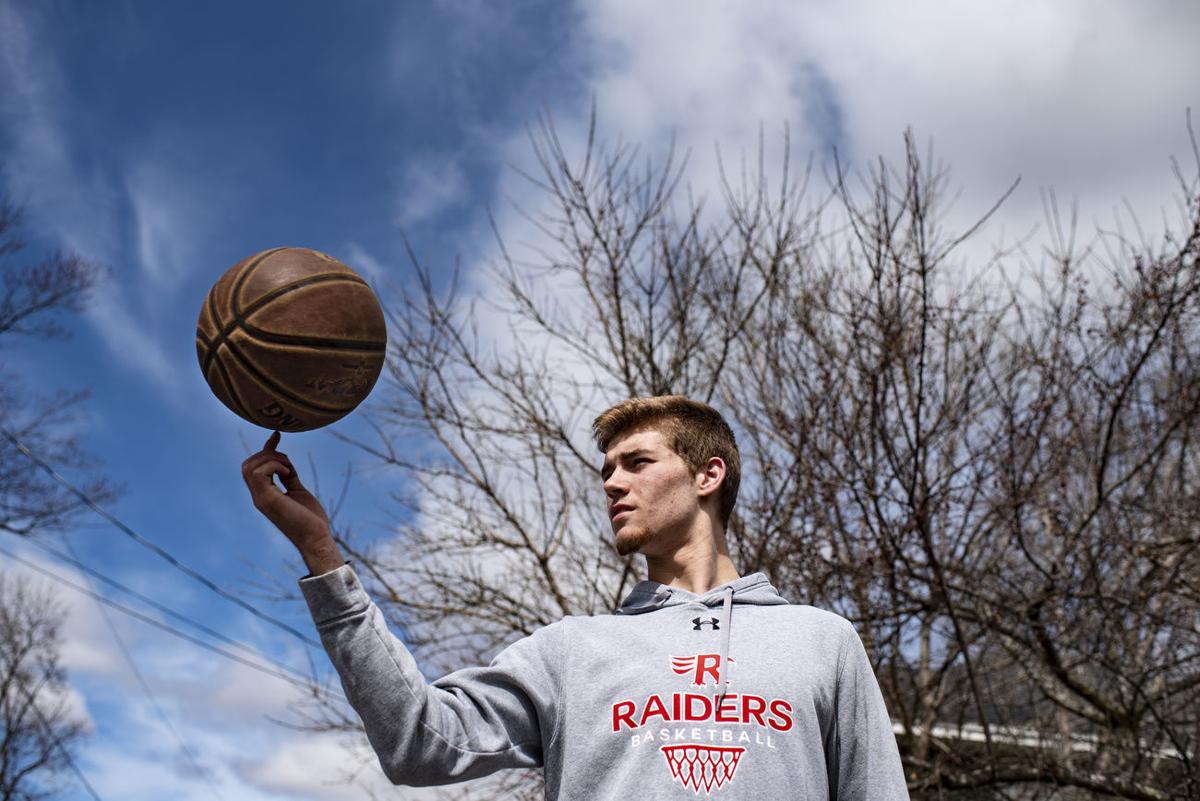 Lowville’s Aidan Macaulay, the Frontier League All-North MVP, is limited to his driveway these days when the desire hits to play basketball. Emil Lippe/Watertown Daily Times 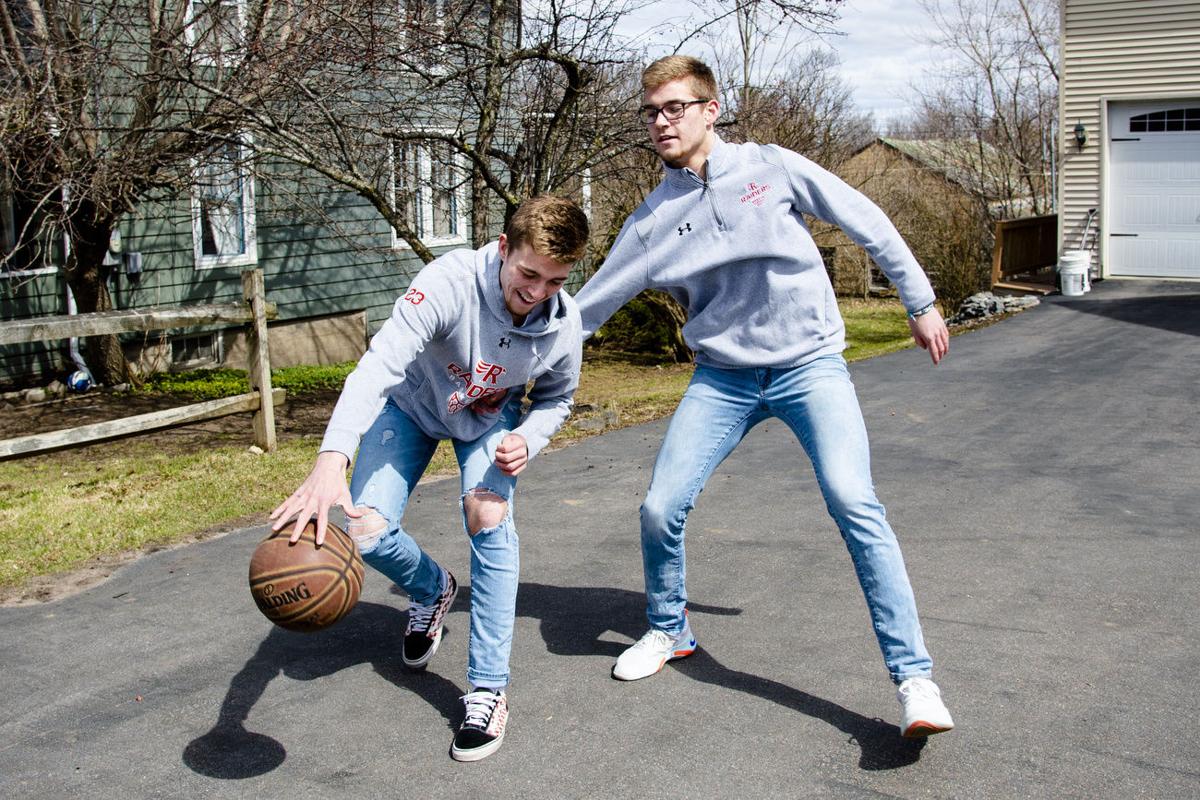 Aidan Macaulay, left, looks to make a move on his brother, Gavin, as they play a game of one-on-one in the driveway of their home Thursday in Lowville. “It’s difficult to play against one another because we know each other’s moves,” said Aidan. Emil Lippe/Watertown Daily Times 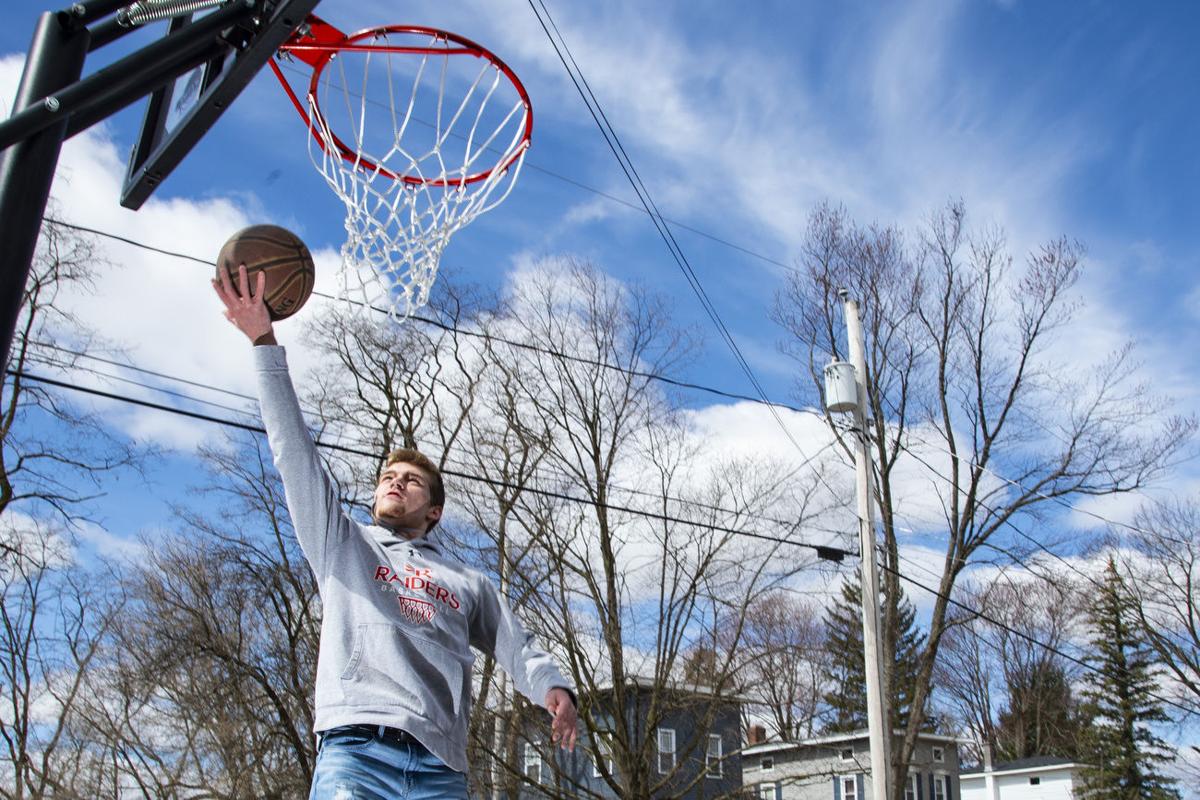 Aidan Macaulay drives for a layup while playing basketball in the driveway of his home. Emil Lippe/Watertown Daily Times

Lowville’s Aidan Macaulay, the Frontier League All-North MVP, is limited to his driveway these days when the desire hits to play basketball. Emil Lippe/Watertown Daily Times

Aidan Macaulay, left, looks to make a move on his brother, Gavin, as they play a game of one-on-one in the driveway of their home Thursday in Lowville. “It’s difficult to play against one another because we know each other’s moves,” said Aidan. Emil Lippe/Watertown Daily Times

Aidan Macaulay drives for a layup while playing basketball in the driveway of his home. Emil Lippe/Watertown Daily Times

LOWVILLE — Right now, Aidan Macaulay’s basketball activity is limited to his driveway. The Lowville boys basketball junior who is the Times All North Frontier League MVP is used to a routine that involved going to school followed by shooting around with his teammates.

The closing of schools and recommendations to stay home caused by COVID-19 has put a halt to all of that.

This has allowed him to reflect on the truly great season he and his teammates put together at Lowville.

It’s been three weeks since the New York State Public High School Athletic Association put its tournament on hold before eventually canceling, and Macaulay, like his teammates, have come to grips with it.

Although Macaulay delivered an exceptional season for the state Class B quarterfinalists, the Red Raiders succeeded as a collective group rather than leaning on one really good player. Each player’s statistics are fairly similar and their roles can be fluid. The lead scorer can vary night to night depending on who has the hot hand or the better matchup.

Yet at point guard, Macaulay often left his mark on the game more than most. Come sectionals, when Lowville proved it wasn’t only the best Class B team in the Frontier League, but also in Section 3, Macaulay stood out. He led the Red Raiders in scoring in the quarterfinals, semifinals and finals, scoring 26 points, 22 points and 24 points, respectively. In that span he knocked down 10 3-pointers, hitting at least three per game.

In 2019-20 Lowville was relatively healthy all season. However, the year prior began with Chad Bach on the bench dealing with an ankle injury. That stretch two years ago, in which Lowville relied heavily on Aidan and his twin brother Gavin, helped set up a productive junior year for both of them.

Aidan Macaulay finished this season with a team-high 361 points for an average of 15.7 points per game. In addition, he drained 42 3-pointers and averaged 4.2 assists.

“This year my improvement came from being able to be relied on by my teammates and get everyone involved in making the right play,” Aidan Macaulay said. “I wasn’t out here scoring crazy numbers and putting up a ton of points, but I’m just trying to make the right play and lead the team as best as I can. I think that my biggest stride this year was becoming the leader of the team and just pushing people and making sure everybody is doing their job.”

As the point guard, Aidan Macaulay rarely took time off the floor, that is until the later part of the second half came and coach Zach Shambo would pull his starters to avoid running up the score.

“Him and his brother and Chad have so much experience and (Aidan) being point guard, he has the ball in his hands a lot,” Shambo said. “He plays his best in the biggest games and that’s kind of what the best players do, they play their best when their best is needed.”

Lowville has the tendency to make even the biggest of games seem easy. Against Solvay in the Section 3 Class B finals, the Red Raiders won 71-50, outscoring the Bearcats in every quarter, much to their large crowd’s delight.

But the games that the crowd can’t see are some of the most competitive. Practices for Lowville often consist of intersquad scrimmages. For Aidan Macaulay, having the opportunity to play hard against his teammates has been important for his development.

With the high school season over, Aidan Macaulay is shifting his focus to making an AAU team. He has his eyes set on the City Rocks 17U EYBL team based in Albany. Once it’s safe to resume sports, both Aidan and Gavin received permission to try out for the team, which already has Baldwinville’s J.J. Starling and Binghamton Seton Catholic’s Brett Rumpel on the roster.

Right now, the interest has been from Division III schools, but the level doesn’t necessarily matter to the junior point-guard.

“I think obviously the D-I level is every basketball players goal. Every kid that plays basketball dreams of going to the big colleges and playing in the tournament and all that, but at the end of the day for me, I think that playing basketball is playing basketball,” Aidan Macaulay said. “So, if I’m not playing D-I and I’m playing D-III, honestly in my mind it’s equivalent because I think playing basketball for a team at the college level is the same either way because it’s still competitive and you’re playing for a championship.”