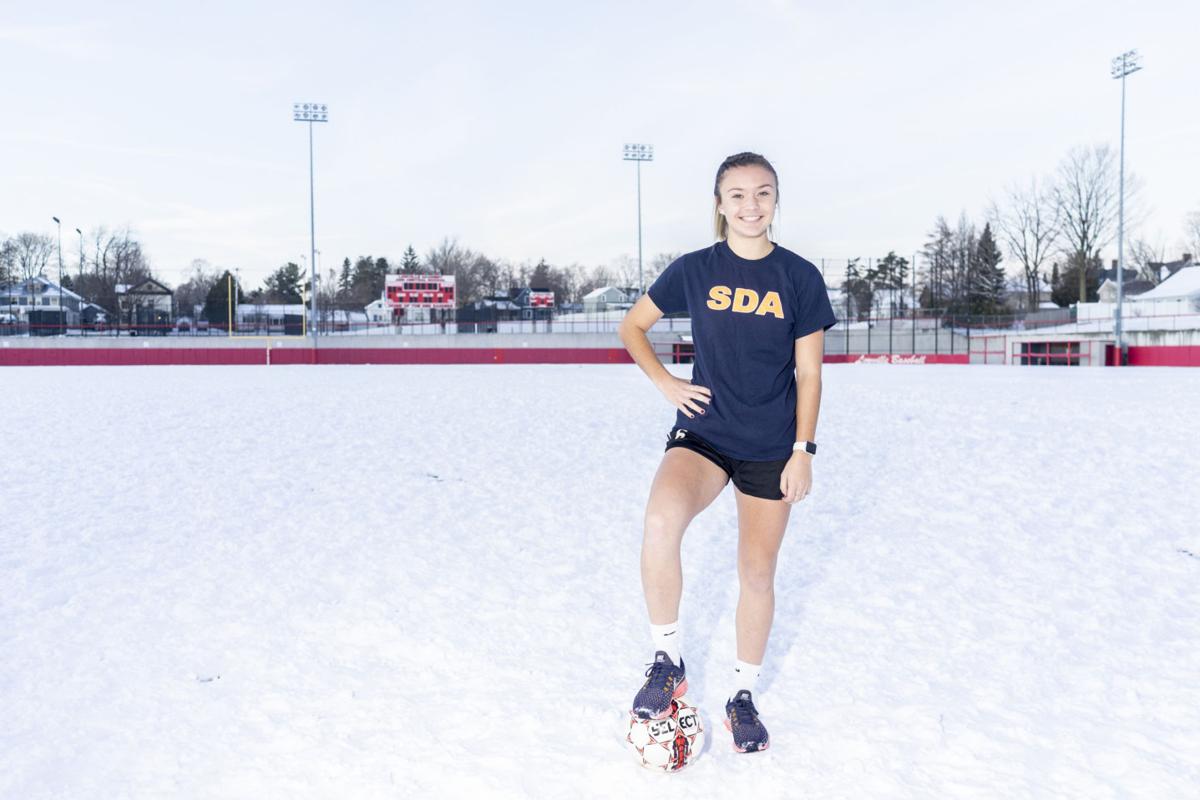 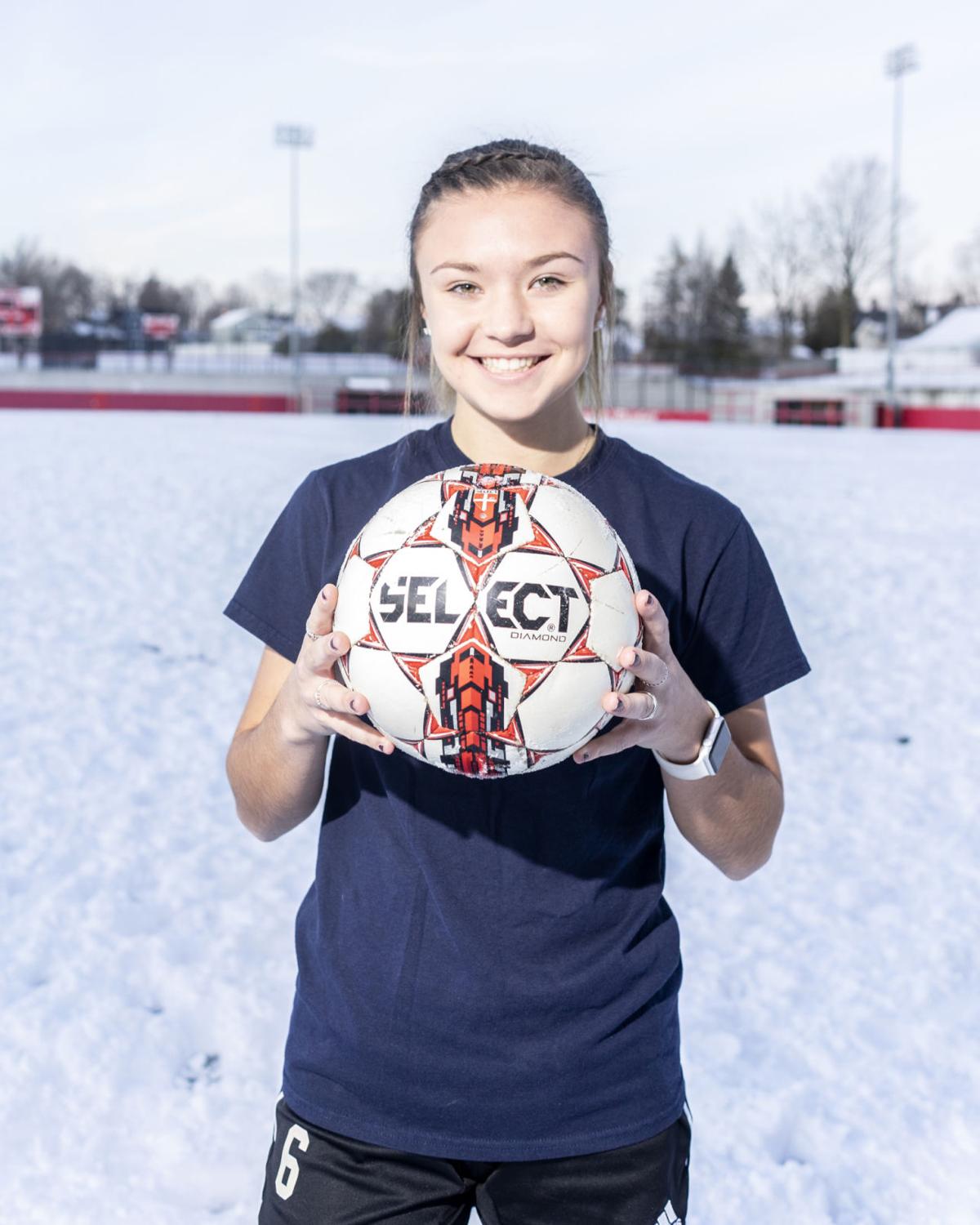 LOWVILLE — Back when she was a ball girl at Lowville Academy soccer games, Hannah Freeman looked up to players such as Taylor Haenlin and Alexis Bach.

Those two, who went on to play soccer at the Division I level after they were standout players for the Red Raiders, influenced Freeman to aspire to do the same.

Freeman, a senior midfielder, has excelled on the soccer field ever since she joined the varsity team back in eighth grade.

For her efforts, Freeman is the latest Lowville player to be selected as the Times All-North Most Valuable Player in girls soccer representing the Frontier League.

Haenlin, who went on to star at Syracuse University, and Bach, now a goalkeeper at the University of Arkansas, were the previous two Red Raiders players named as All-North MVPs in the sport.

“Of course, there’s been a lot of girls I’ve looked up to,” said Freeman, who will be moving on to attend Division I Rider University to play soccer. “They were all great players, and not only were they great players, they worked really hard and that’s something that really inspired me.”

The versatile Freeman helped lead Lowville to its second consecutive unbeaten season in the Frontier League.

The Red Raiders fared 10-1-1 in the circuit to also claim their sixth consecutive “B” Division crown.

“All the way from our goalie to our forwards, it meant a lot to us to win another consecutive title,” Freeman said.

This year, Freeman once again stood out as a central midfielder, a role she’s had with Lowville for most of her four seasons at the varsity level.

Along with directing Lowville from the midfield this season, Freeman scored 25 goals and assisted on 10 others to total 60 points this season.

“Her one ability that really stands out, is she can hit the ball hard,” Sammon said. “She can score from pretty far distances, she scored quite a few goals that way. That really makes players move up and play her and that opens up other opportunities for other players.”

Freeman was also named as a Section 3 All-Star in Class B for the second consecutive year.

Much of Freeman’s offensive success came on set-piece plays, such as penalty kicks and corner kicks, and she was just as dangerous on free kicks as well.

“I play on my club team in Syracuse, too, so I take a lot of set pieces for them,” said Freeman, who plays for a team representing Syracuse Development Academy. “So it’s something that I’m always working on.”

She continued: “It’s definitely nerve-wracking, but I’ve got myself to the point where I just stay composed. Nothing freaks out the goalie more than when you don’t look at them and stay composed.”

After Lowville opened its league season with a scoreless tie against rival South Jefferson, the Red Raiders won their next 10 games in league play.

This included a 3-1 win over the Spartans on Oct. 9, in which Freeman figured in all three Lowville tallies, including two goals.

“I think overall, her power, her ability with the ball, she has really, really good control of the ball,” Sammon said. “And just the intangibles, she’s an incredibly competitive girl, who has worked very, very hard since the fifth or sixth grade to be the best she can.”

The Red Raiders, who had reached the Section 3 semifinals the previous year, were knocked off on their home field by Vernon-Verona-Sherrill in a first round sectional game on Oct. 23.

“Even in our last game, it was heartbreaking for us and especially for me,” Freeman said. “I was proud of our whole team, it was a tough way to go out.”

One of nine seniors on this year’s team, Freeman hopes she and her classmates, including midfielder Sydney Brown and defenders Anna and Sara Wood, have left a legacy of their own.

“Especially starting since the eighth grade, I’ve watched every group of seniors carry on the tradition,” Freeman said. “So this year to us seniors, it meant a lot to be able to pass that down to the next group and we take pride in every single game, everything we do is tradition.”

As a youngster, Freeman also looked up to previous Lowville standout players, such as Keely and Kelsey Sammon, as well as, more recently, Selena Beller and Haley Cole, both of whom also were her teammates.

“Selena Beller played the same position that I did, but Lexi was a goalie and Haley Cole was a center-back, Taylor was a forward,” Freeman said. “So I didn’t play the same position as most of them, but just their work ethic and the way that they controlled the game is what inspired me.”

And like Haenlin did and Bach currently does, Freeman has her sights set on playing in the Division I ranks in college when she attends Rider.

“I’m super excited for the opportunity,” Freeman said. “I think it’s going to be a big change from Lowville to go to New Jersey. But I’m hoping to play center-mid there and capitalize on the chance I’ve been given.”