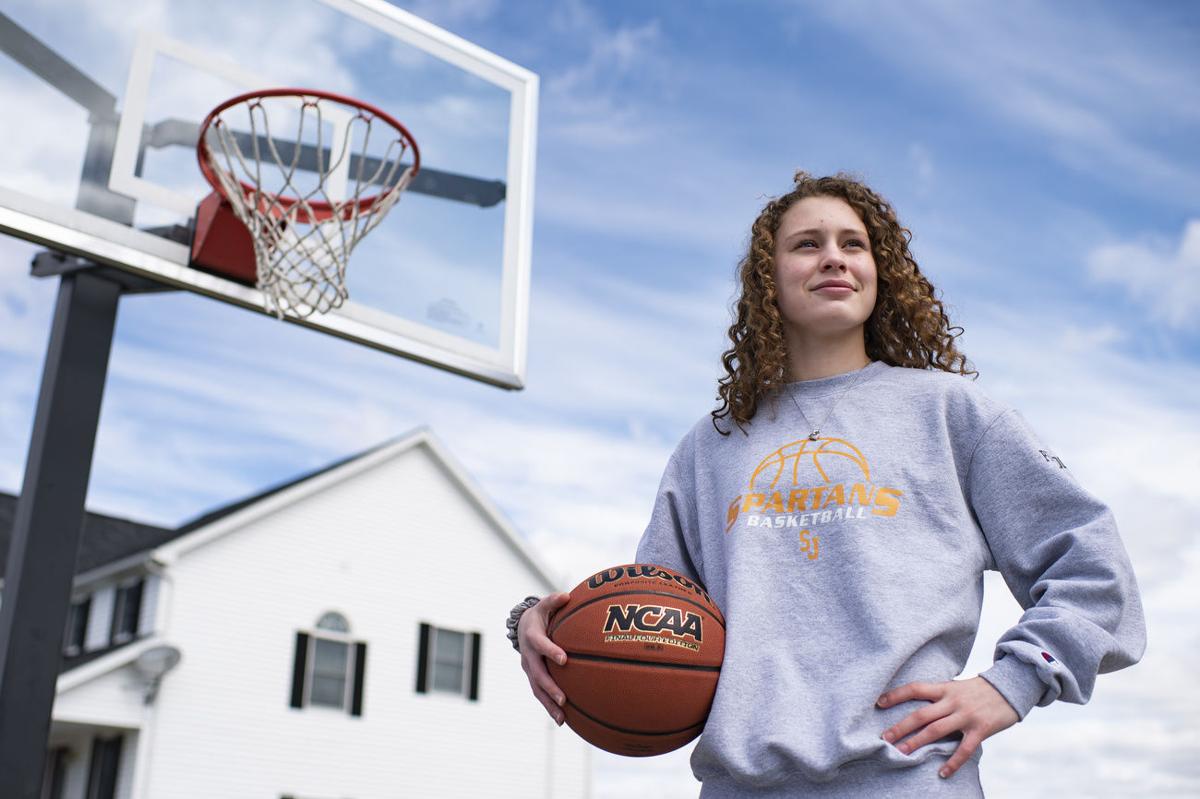 South Jefferson’s Jackie Piddock, standing in the driveway of her home in Adams, is the Times’ All-North Frontier League Most Valuable Player. Emil Lippe/Watertown Daily Times 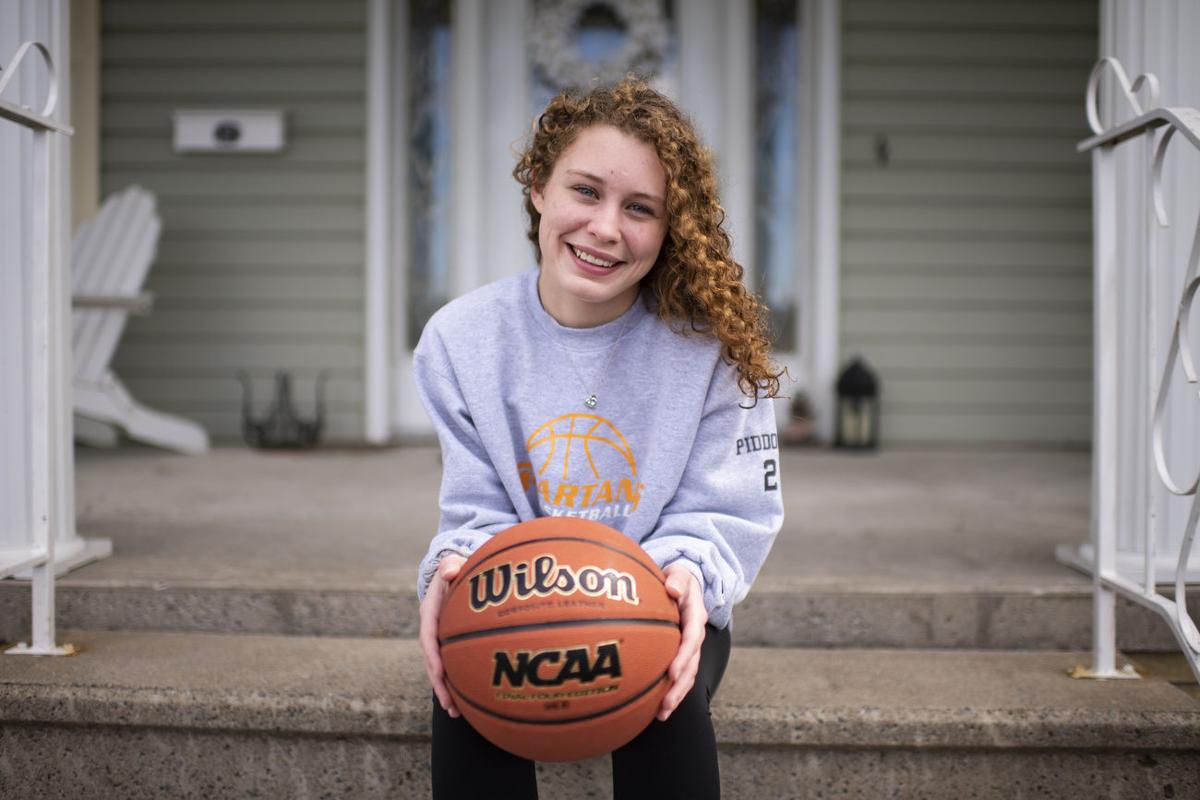 South Jefferson’s Jackie Piddock sits on the steps of her home in Adams on Thursday. Emil Lippe/Watertown Daily Times

South Jefferson’s Jackie Piddock, standing in the driveway of her home in Adams, is the Times’ All-North Frontier League Most Valuable Player. Emil Lippe/Watertown Daily Times

South Jefferson’s Jackie Piddock sits on the steps of her home in Adams on Thursday. Emil Lippe/Watertown Daily Times

ADAMS — It’s easy to forget Jackie Piddock’s age. The sophomore has been on the Times All North first team for three years in a row and has won back-to-back Times All-North Frontier League MVPs, including the latest, for the 2019-20 season.

She’s already led the South Jefferson girls basketball team to two sectional titles and one state final four and could have possibly made it even farther than that this season had the New York State Public High School Athletic Association not canceled the 2020 tournament.

For at least four years now Piddock has been known as the super-talented young kid on the varsity team.

But that designation is quickly fading. Piddock remains just as talented as ever but she’s transitioning away from being the team’s young star to an upperclassman.

Hearing herself be considered an upperclassman still feels strange to the 15-year-old.

“It’s really weird, because I’ve always been the youngest,” Piddock said. “And that little girl that everyone was like ‘oh she’s so small and just doing her thing,’ and now it’s going to be like, I’m an upperclassman. When I thought of upperclassmen in like seventh and eighth grade, I was like, ‘oh my gosh, they’re so old,’ and now I’m thinking how that’s going to be me and it’s weird.”

Although she still has yet to finish her second year in high school, her numbers are better than that of your typical sophomore.

Her dominance knew few limits. Even against the state’s top Class AA schools, Saratoga and Our Lady of Mercy, Piddock finished with 23 and 32 points respectively.

A jump in offensive production was inevitable. With former teammate Alyssa Stevenson graduated, the Spartans’ offense was going to run through Piddock more than ever before. Not only did she excel statistically, she exuded confidence.

Confident players not only know how to score, they know how to control games and shift the pace in their favor. With a second consecutive sectional title on the line, Piddock did just that.

In the semifinals against Marcellus, Piddock helped the Spartans get out of a first half rut by knocking down three quick 3-pointers. And in the finals versus Bishop Grimes, she scored 22 points in the second half to seal the win and the title.

Neither performance prompted a sense of awe because it seemed so normal for Piddock. Even after the game, coach Michelle Whitley simply said, “yeah, she doesn’t like to lose.”

Winning won’t necessarily become harder than it already is in the year to come as the Spartans have a solid core of players returning next season. Not among them though will be Jackie’s older sister Abby, a senior this year.

The two expected to play alongside each other for a few more games following their sectional championship win over Bishop Grimes, but the spread of COVID-19 scrapped those opportunities.

“[Playing with Abby] was amazing, with her as another player out there and my dad as the coach, having all three of us there, it was nice,” Jackie Piddock said. “Because she knows me, if I’m in practice and I get down on myself, she knows how to pick me up and the other way around. I helped her as well. It’s going to be a little bit different next year, but it’s going to be a good adjustment.”

For as long as Jackie Piddock has played varsity basketball, Abby has been the elder Piddock on the team. This past year, Abby also served as captain alongside Megan Whitley.

Both Abby Piddock and Megan Whitley pushed their teammates, including Jackie, in practice and on the court, instilling the mentality of hard work.

“Abby and Megan are both very similar in the sense that they’re workhorses,” coach Michelle Whitley said. “Her and Megan push a lot of people to become better over the course of the years that they played, no matter what sport it is.”

Once practice ended, Jackie then went home with her sister Abby and the push to work harder continued. Whether out in the driveway or in the garage, Jackie always feels that push from her older sister.

With Jackie preparing to take on more of a leadership role in these next two years, Abby offered her advice.

“The one thing I would probably say is to just lead through example,” Abby said. “During practices, during games, just be that constant, aggressive, high-intensity player that everybody can look up to set that bar through her actions.”

One of Jackie Piddock’s biggest challenges as she becomes a junior will be to figure out how to push her teammates like her sister and Megan Whitley pushed her, and to never let up that work horse mentality.

Coach Whitley also expects to get on her soon-to-be junior star more than usual.

“I am (doing) that now, but I didn’t have to be as much because of (Megan and Abby), obviously they were both our captains this year,” Michelle Whitley said. “Already in my head, now that everything is definitely done for us this season, I’m starting to think about next season and what we’re losing from our seniors this year, and I already know that a key in our practices is me making (Jackie) bring her best effort to every practice.”

Jackie Piddock still has a few more months of her sophomore year before she’ll be considered a junior on the court. And before she’ll suit up in the Spartans’ black and yellow uniform again, she’ll wear her AAU colors, those of the New York Havoc, blue, silver and white. That’s the plan anyway. With sports of any kind currently on hiatus, the prospect of playing an AAU season is still unknown.

That hasn’t prevented Piddock from working out though. Her AAU coach, Terrance Florence, has given his players workouts to do at home and Piddock has gotten into the habit of communicating with teammates through FaceTime so they can all do the workouts together twice a day.

Her goal in the offseason is to work on tightening up her ball-handling and finishing better at the rim. Most people watching her would think she has both of those traits down, but she notices the little mistakes.

“With the ball-handling I think I need to incorporate more of that into my game,” Piddock said. “With pressure on me I need to be able to use it more. I have a handle, a decent one I think, but being able to get out of pressure situations with it.”

A tighter handle — just another thing for Jackie Piddock’s opponents to dread.