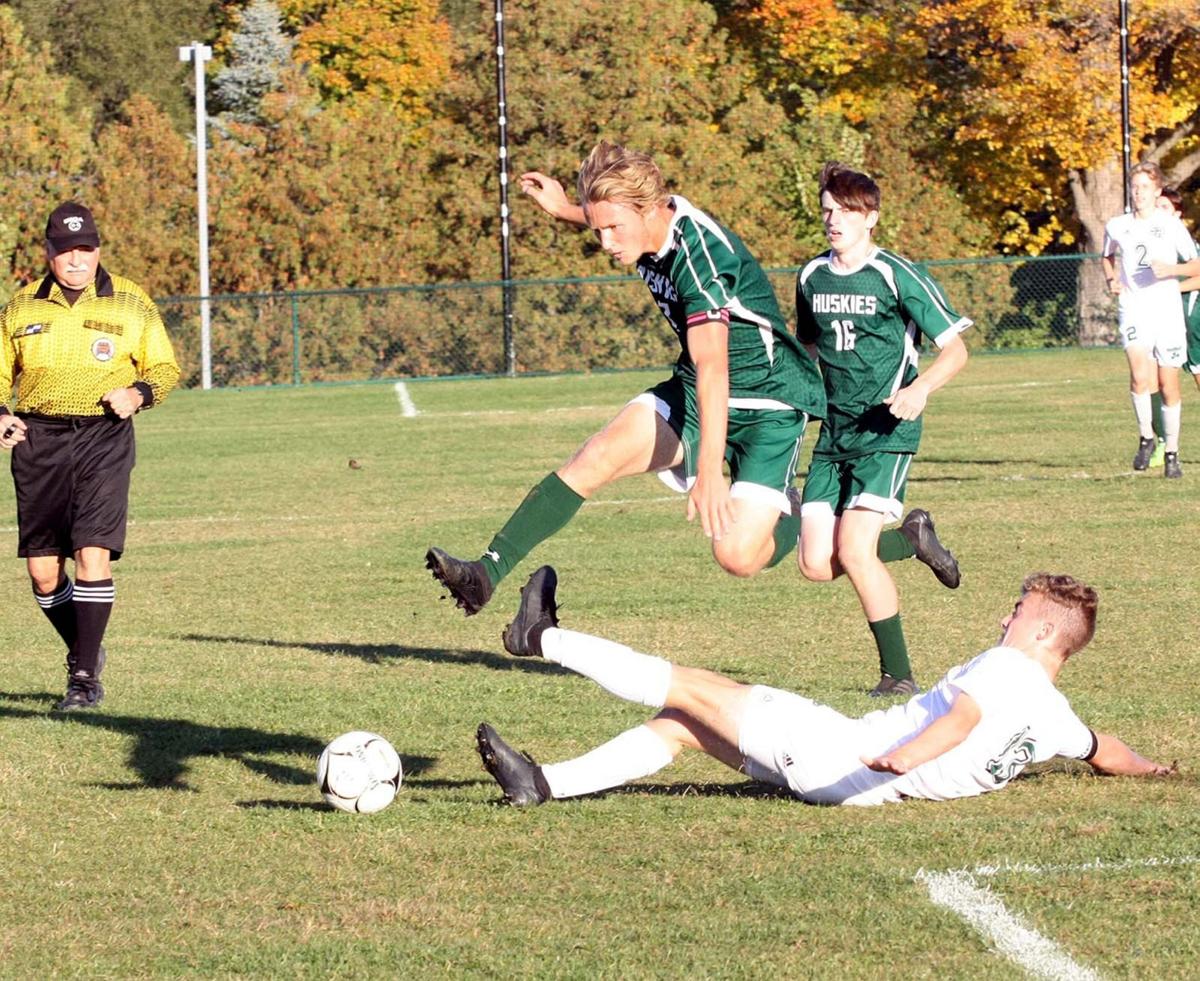 Malone’s Hans Schumacher leaps over the attempted tackle by Salmon River’s Tim Cook during a game in Malone during the season. John Gokey/The Telegram 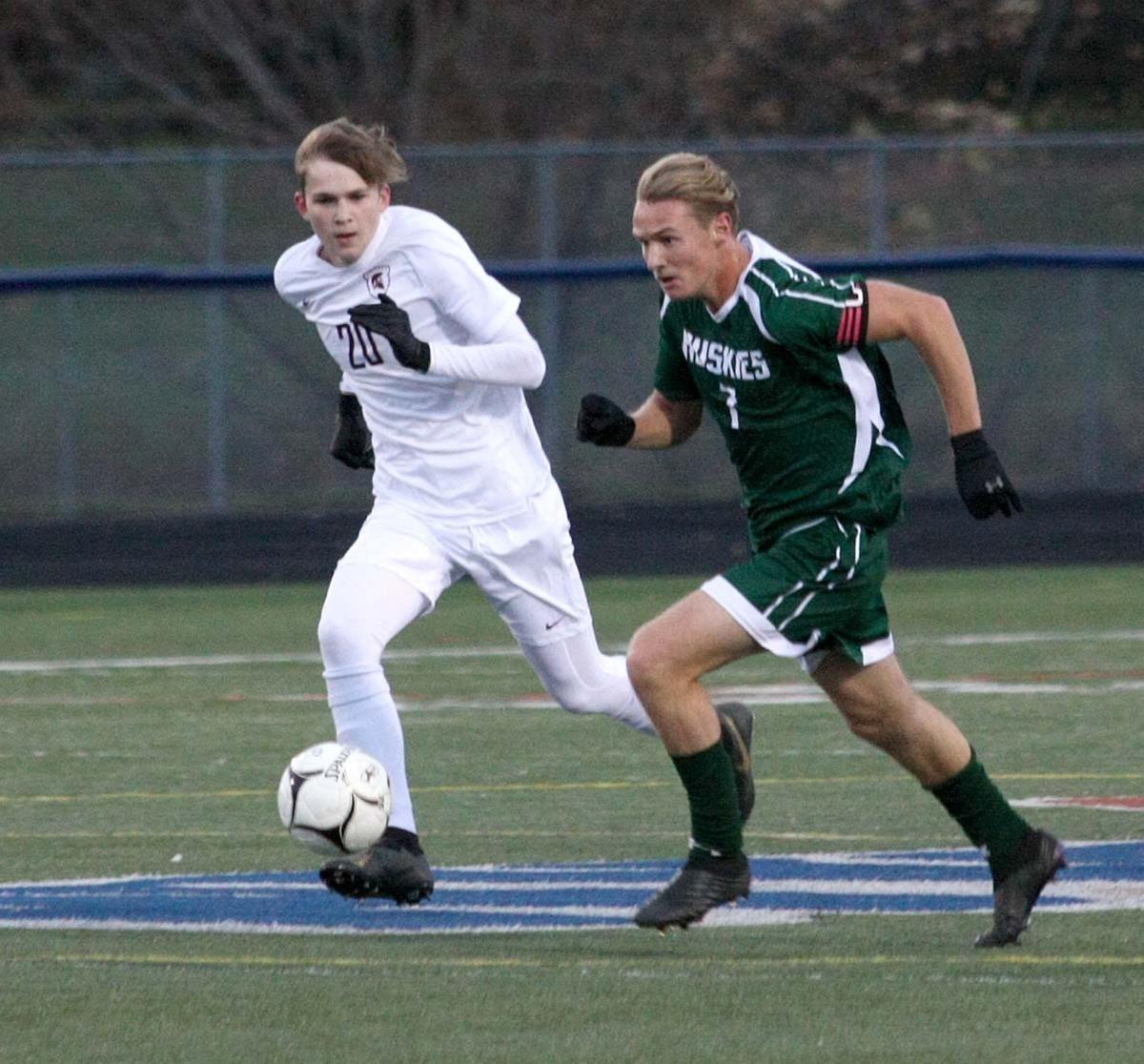 Malone’s Hans Schumacher races up the field during the Huskies’ state Class A regional game against Burnt Hills-Ballston Spa in the postseason.John Gokey/The Telegram

Malone’s Hans Schumacher leaps over the attempted tackle by Salmon River’s Tim Cook during a game in Malone during the season. John Gokey/The Telegram

Malone’s Hans Schumacher races up the field during the Huskies’ state Class A regional game against Burnt Hills-Ballston Spa in the postseason.John Gokey/The Telegram

MALONE — The list of postseason awards continues to grow for Malone’s Hans Schumacher, who has been selected as the Section 10 MVP on the Watertown Times All-North boys soccer team.

“This was totally unexpected,” Schumacher said of the Times award. “From what I’ve seen and read in the past, this award normally goes to the top scorer in the league.”

Schumacher, who was also named as the Northern Athletic Conference Central Division’s Offensive MVP, helped the Huskies capture the Central Division’s regular-season title as a junior with an 8-2 record and a Section 10 Class A title, a crown that advanced the Huskies to the state playoffs. He has previously received Section 10 All-Northern honors and was selected to the Times’ All-North first team in 2018.

“I am very happy to receive this award. It will definitely add to my sports resumé for the next step after high school,” he said and added that he has already been contacted by NCAA Division I, II and III schools.

“I definitely want to play soccer at the next level,” Schumacher said, noting that he has already participated for several top-notch programs in the Northeast Region, including the U14 Columbus Crew (Ohio), the New York City-based Red Bulls on its U12 team and Rochester’s Empire United on both U12 and U14 squads.

He led the Huskies in scoring with 15 goals and tied senior Jake VanSteenburg for the top spot with nine assists. In his three seasons on the varsity team, he has accumulated 48 goals and 26 assists – and still has a year remaining in his high school career.

“Hans is a very special player that any coach would dream of having,” said boys varsity coach Chris Yaw. “He has a very high skill level in every aspect of the game, and is still one of the hardest workers in every practice session.

“He has an amazing understanding of the game and tactics, and drives the people around him to push harder and helps to raise them to a higher level of performance,” Yaw said.

Along with his understanding of what needs to be done on the pitch to be successful, Schumacher is also on top of his game in the classroom and possesses a 3.4 grade point average.

While the high school season lasts for only a couple of months in the fall, Schumacher stays active by playing for the Far Post club team, which is based in Burlington, Vt., and practices during the week and plays games on the weekend.

“It’s a lot of traveling, but I really enjoy it,” said Schumacher, who is the son of Stefan and Michelle Schumacher of Owls Head.

Along with his high school work load on and off the field, Schumacher can also be seen on the sideline guiding U12-aged players on local rec teams during the fall season.

Yaw also pointed out that Schumacher has a chance to equal or surpass the school career boys soccer scoring record of 64 goals. He will need to score 16 times during his senior season to equal the school mark.