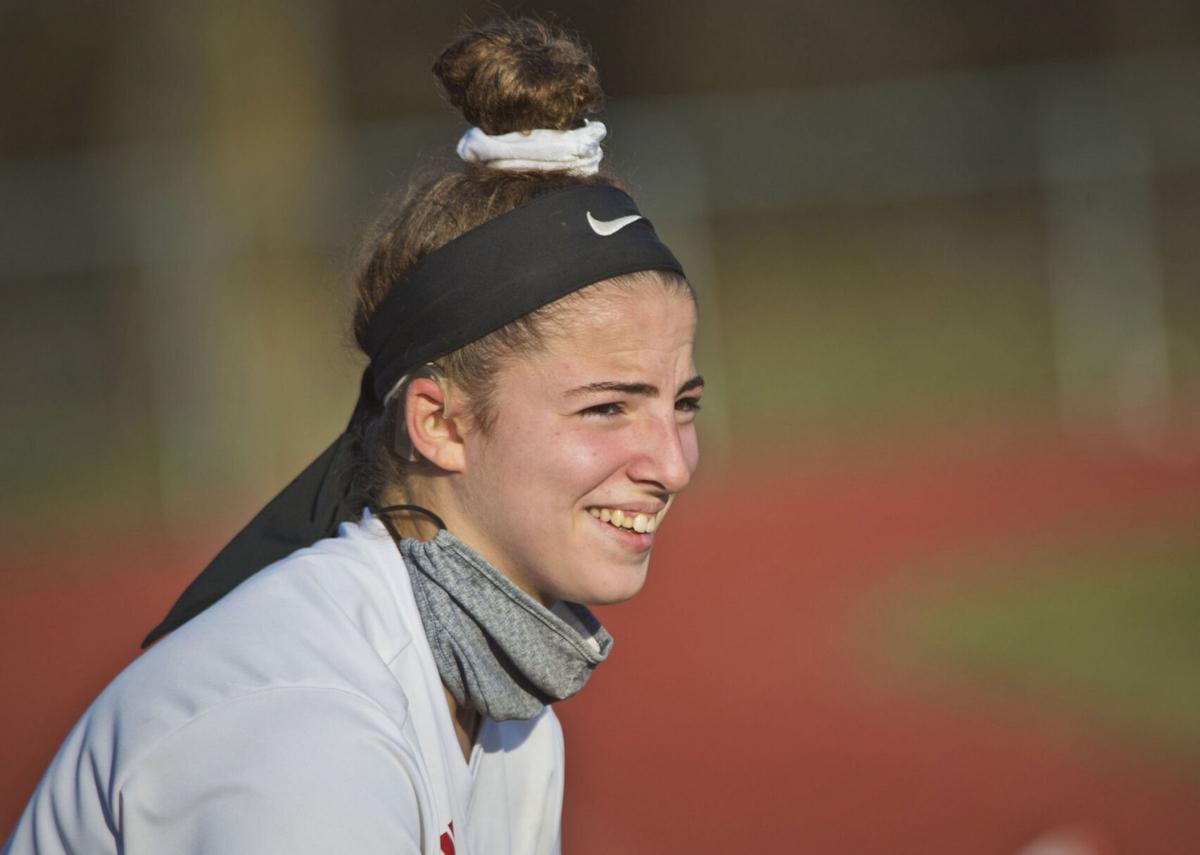 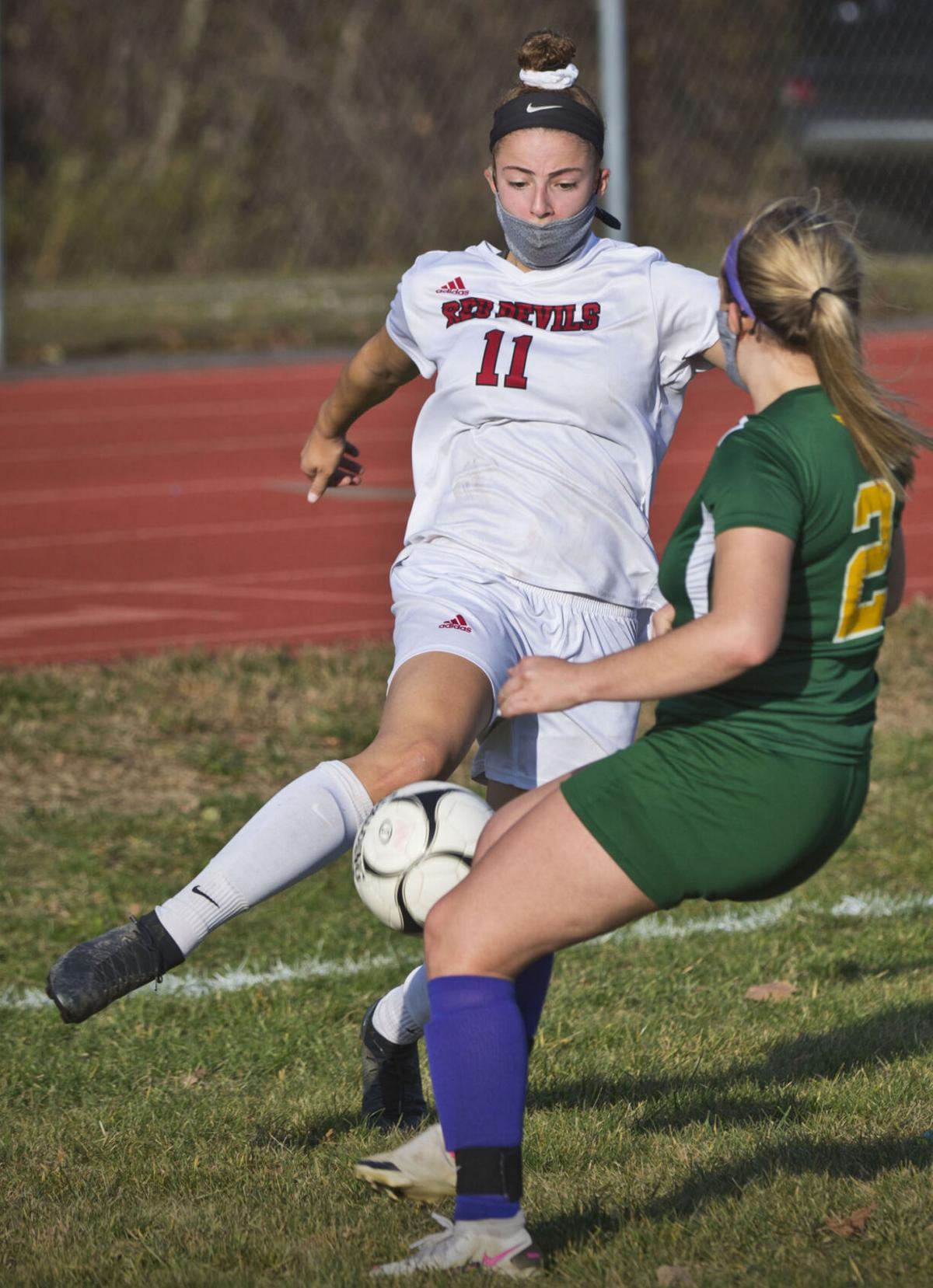 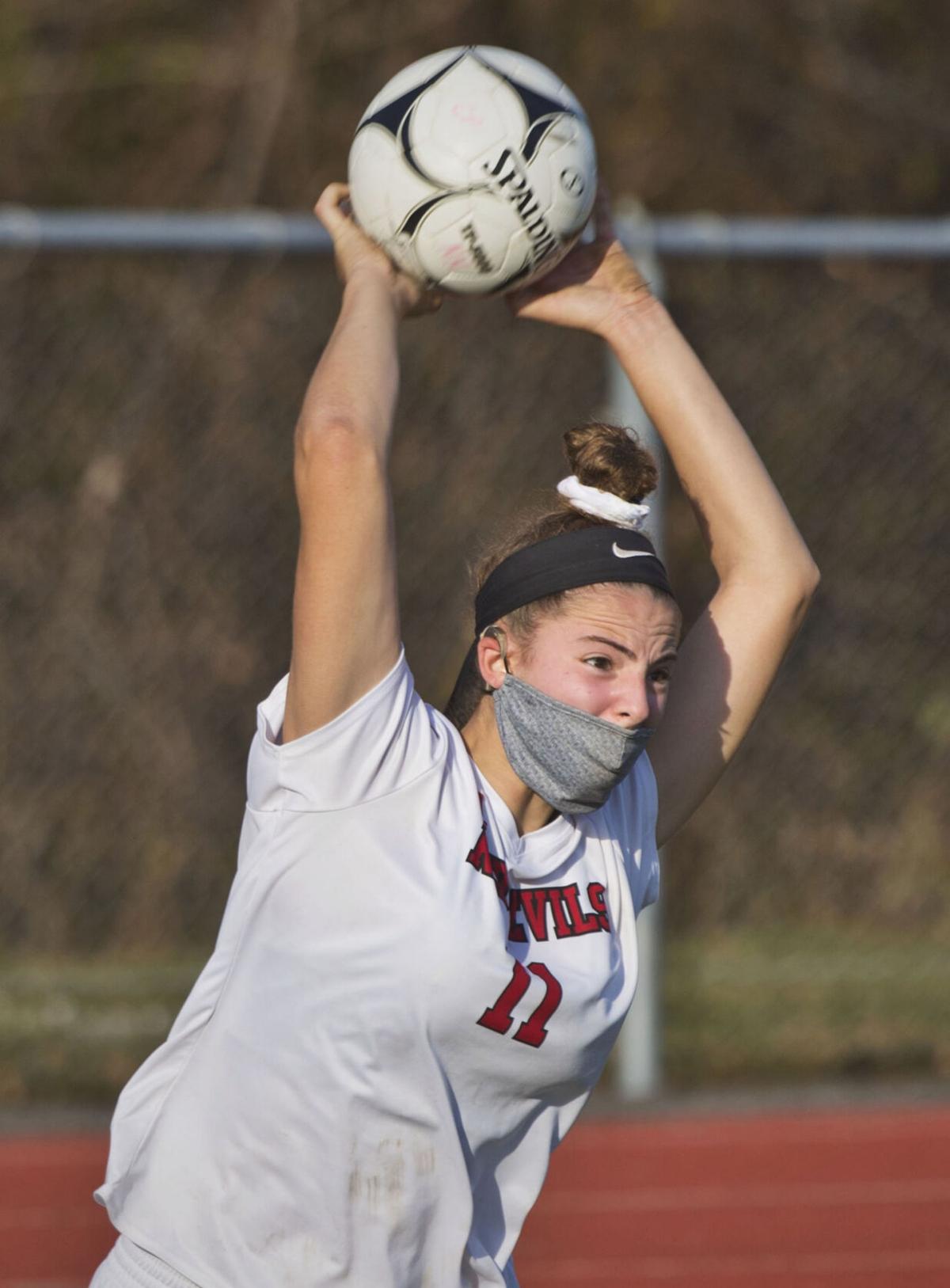 Hammond senior Avery Kenyon, who provided another inspirational season this fall despite a disability she’s dealt with all of her life, is the Times All-North Northern Athletic Conference MVP for girls soccer. Christopher Lenney/Watertown Daily Times 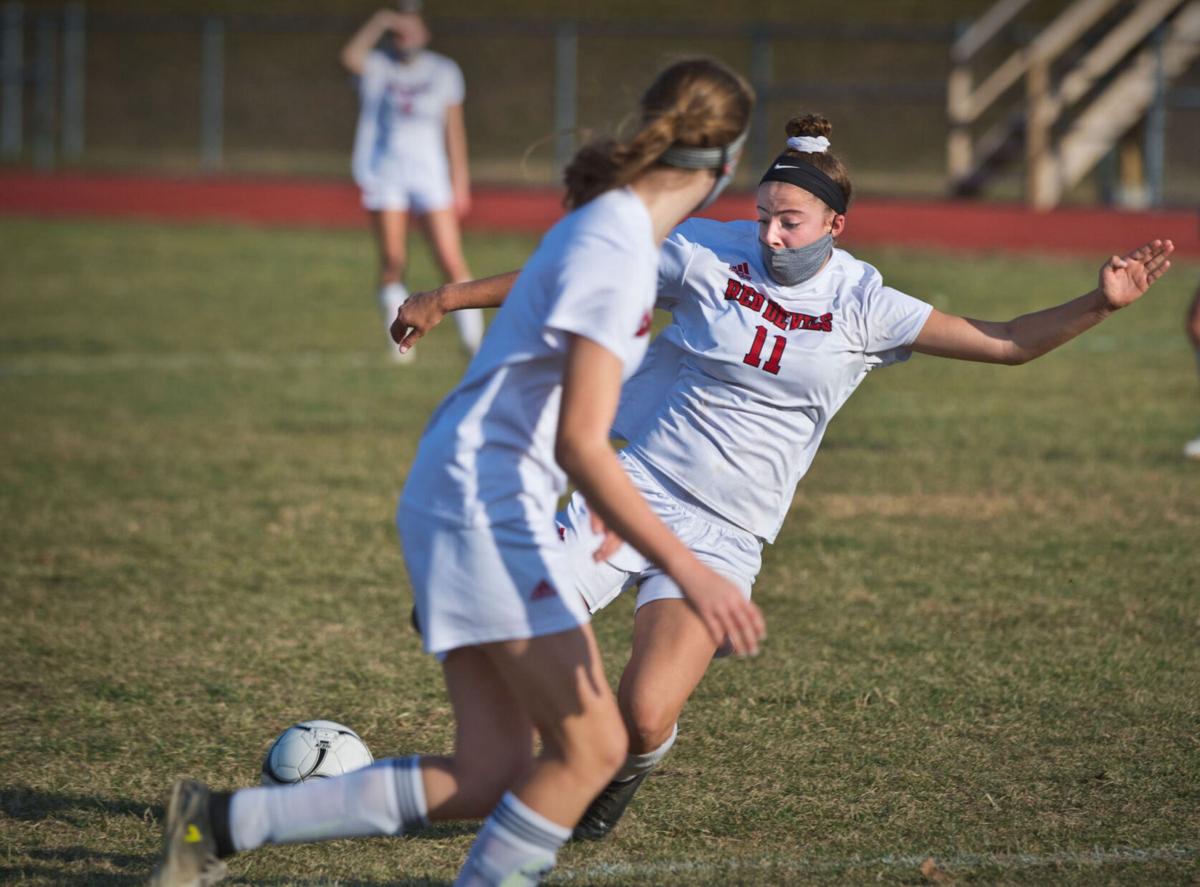 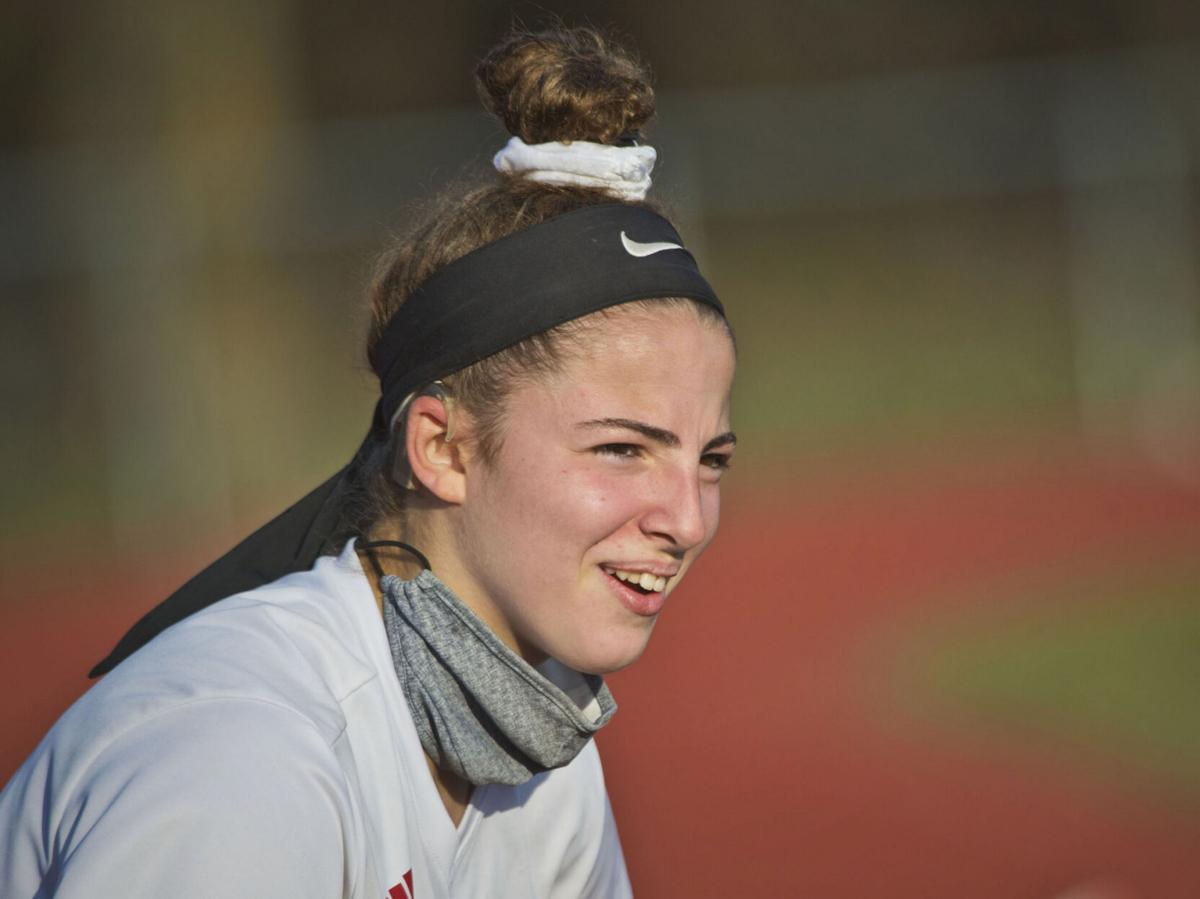 Hammond senior Avery Kenyon, who provided another inspirational season this fall despite a disability she’s dealt with all of her life, is the Times All-North Northern Athletic Conference MVP for girls soccer. Christopher Lenney/Watertown Daily Times

Hammond senior Avery Kenyon, who provided another inspirational season this fall despite a disability she’s dealt with all of her life, is the Times All-North Northern Athletic Conference MVP for girls soccer.

Kenyon recorded 32 goals and nine assists to lead Hammond to another undefeated regular season. COVID-19 restrictions prevented Hammond from having a chance to make a return trip to the state Class D final four.

Kenyon has achieved all her success on the soccer field, as well as in her primary sport, basketball, despite being deaf.

A cochlear implant enables Kenyon to do things most people take for granted, like engage in conversations, hear most sounds on the field, as long as it isn’t too loud, and also talk to people on the phone.

“It’s sometimes an issue,” Kenyon said. “My teammates and coach (Shawn Dack) always understand me. They always let me know if I didn’t hear something and have always supported me through it. My sister (Landree) is the same way as me. We both have gone through the same stuff. If there is a younger kid, we want to be bigger role models for them, especially with what we’ve been through.

“Me and my sister were both born deaf. At the age of a year and a half we were both allowed to get a cochlear implant. (People) have to talk a little bit louder. During school I wear an (FM system for hearing impaired) to be able to hear my teachers. It’s definitely different. I wouldn’t want it any other way. I feel like it helps me to push myself and know that I don’t think of myself different from any other people.”

Dack mentioned that Kenyon hears and communicates so well, thanks to the cochlear device, that he sometimes forgets her disability.

“When it’s noisy you have to keep her close and make sure she can see you, because she reads lips,” Dack said. “I think it’s unbelievable how she goes about it. It’s very inspiring. She’s going to be fine, and when you are around her as much as we are, you forget about it. In that sense, it’s a good thing.”

The only extra measure Dack must take in soccer games is remind officials before the game that sometimes Kenyon may not hear a shouted instruction or a whistle and if she keeps playing she’s not trying to be disrespectful.

On the field the biggest adjustment for Kenyon this season was the graduation of Kelsey Bennett, who was last year’s All-North MVP and combined with Kenyon to send Hammond to the final four.

“It really felt like I had to step up and take over,” Kenyon said. “I moved from my position to hers, to try to get the goals. Last year she was one of the main parts of our team.”

Kenyon said she learned a number of things playing alongside Bennett last year.

“Her aggressiveness, how she handled the ball and her scoring ability was a main part of our team,” she said. “Her strong foot we lost, too. That’s what I felt like I had to improve a little bit more so I can help us.”

Kenyon’s skills on the soccer field and the basketball court are impressive enough that she drew some basketball interest from the University of Massachusetts, an NCAA Division I program where former Heuvelton standout Paige McCormick played for three years.

“She’s just athletic,” Dack said. “You could put her in any situation. She’s got it. She always had it. You just want to keep directing her in the right direction to be successful and not coach her too much to disrupt her.”

Kenyon said she became interested in soccer watching her older brother, Taylor, and her older sister, Brittany, play when they were kids. This year her younger sister, Landree, a freshman, was a teammate.

“She is a talented player,” Kenyon said of her sister. “She was just like me, took a little while to get herself going. She started out playing goalie, because our goalie was hurt. She got stronger and she showed a lot of athletic ability and made me proud. It was the best. I wouldn’t want it any other way.”

Kenyon has not officially chosen a college yet, but she appears headed to SUNY Plattsburgh next year to play women’s basketball at the Division III level.

“It reminds me of home, almost, but it’s almost a city,” Kenyon said of Plattsburgh. “I’ve been there to play travel ball. It’s a beautiful place.”

The future of winter and spring sports does not look good at the moment, with the number of COVID-19 cases in the area rising, so it’s possible Dack may have coached Kenyon for the last time.

“She’s a jokester,” Dack said. “Sometimes I have to rein her in on that once in a while. She’s team first, she really is. She grew into that. A lot of people misinterpreted that when she was younger because she was good, you could see it. Some of the girls were always behind her, but you could see in the other girls that eventually they were going to catch up. She’s always there to pat somebody else on the back. It’s remarkable how she goes about and does it, being hearing impaired. She’s very inspiring.”