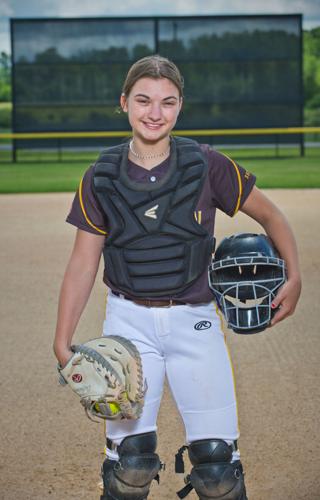 Canton senior catcher Cate DeCoteau, June 10, “She’s the best teammate ever,” Canton coach Mike Wentworth said. “Everybody loves Cate. If she’s not here the atmosphere is all different. She brings life to the practice. She’s not only talented, but she tries to make everybody better and happy around her.” Christopher Lenney/ Watertown Daily Times 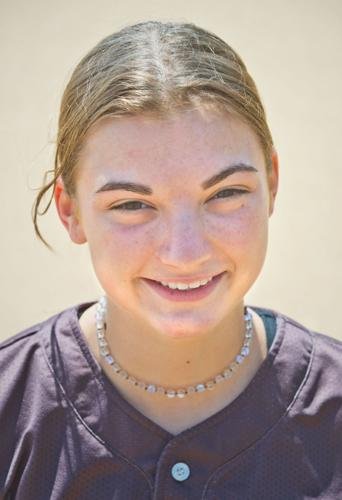 Canton senior catcher Cate DeCoteau, June 10, “She’s the best teammate ever,” Canton coach Mike Wentworth said. “Everybody loves Cate. If she’s not here the atmosphere is all different. She brings life to the practice. She’s not only talented, but she tries to make everybody better and happy around her.” Christopher Lenney/ Watertown Daily Times

This year her primary pitchers were Alguire and Hoy and Canton finished with a 19-1 overall record, losing only to eventual state champion Ichabod Crane.

DeCoteau, a senior who is the Times Northern Athletic Conference Most Valuable Player on this year’s All-North softball team, also excelled at the plate, batting .581 with 15 extra-base hits (seven doubles, seven triples and a home run). She also stole 19 bases.

DeCoteau is so knowledgeable about opposing hitters she even has pitch calls in mind if one of her pitchers were to face her at the plate.

“Probably for Hadley, her drop-balls are lethal,” DeCoteau said of the pitch she’d call against herself. “Probably for Ava, her rise. I like to go after the high pitch sometimes and she has a good rise.”

Wentworth, who has coached either varsity or junior varsity softball since the 1990s, including a stint at Hermon-DeKalb, said he has never allowed a catcher to call pitches until DeCoteau.

“She is one of the top catchers that Canton has ever had,” Wentworth said. “The way that she hit, way she handled pitchers, how coachable she was. The last two years she’s been the heart and soul of the program. It’s kind of weird now, not seeing her in summer softball. She’s right up there with some of the best.

“She is just so smart and so softball-savvy and studies hitters so well. That was a huge privilege to her. It’s a compliment to her on how well she (called pitches). She was on the same brainwaves as (coaches) were most of the time.”

Both of DeCoteau’s coaches at Canton, Wentworth and his daughter Kacie Brabaw, who handles the pitching staff, have great experience.

“I think I have definitely gained a lot of softball knowledge from Kacie and Mr. Wentworth,” DeCoteau said. “They teach that well. I understand the game better and I feel like I could run a game myself, which I think is important. Our whole team understands that now.”

DeCoteau has done a lot of catching at Brabaw’s tutoring sessions, which also has added to her ability to handle Canton’s pitchers.

“I take it like a practice, basically,” DeCoteau said. “I practice framing (pitches). It’s like being on a full-year team.”

One fun aspect for DeCoteau the last two seasons is being a teammate of her younger sister Lucy, a sophomore. DeCoteau said Lucy is a bit more calm than she is during games.

“It’s been a great opportunity playing with her,” Lucy DeCoteau said. “I’ve learned so much playing with her and watching her. It’s really awesome. It will be a big change (without Cate). She’s a big part of our team.”

DeCoteau is also one of Canton’s top students, and she will be going to Boston College in the fall, but the only sports she will play will be intramural.

“It will be a big change,” DeCoteau said of leaving town. “I’m excited for it. I’ve always wanted to live in a big city.

“I loved (Canton softball). I’m going to miss it so much. It’s my favorite sport and my favorite team. I was really happy with how our season went and I think they will do great next year.”