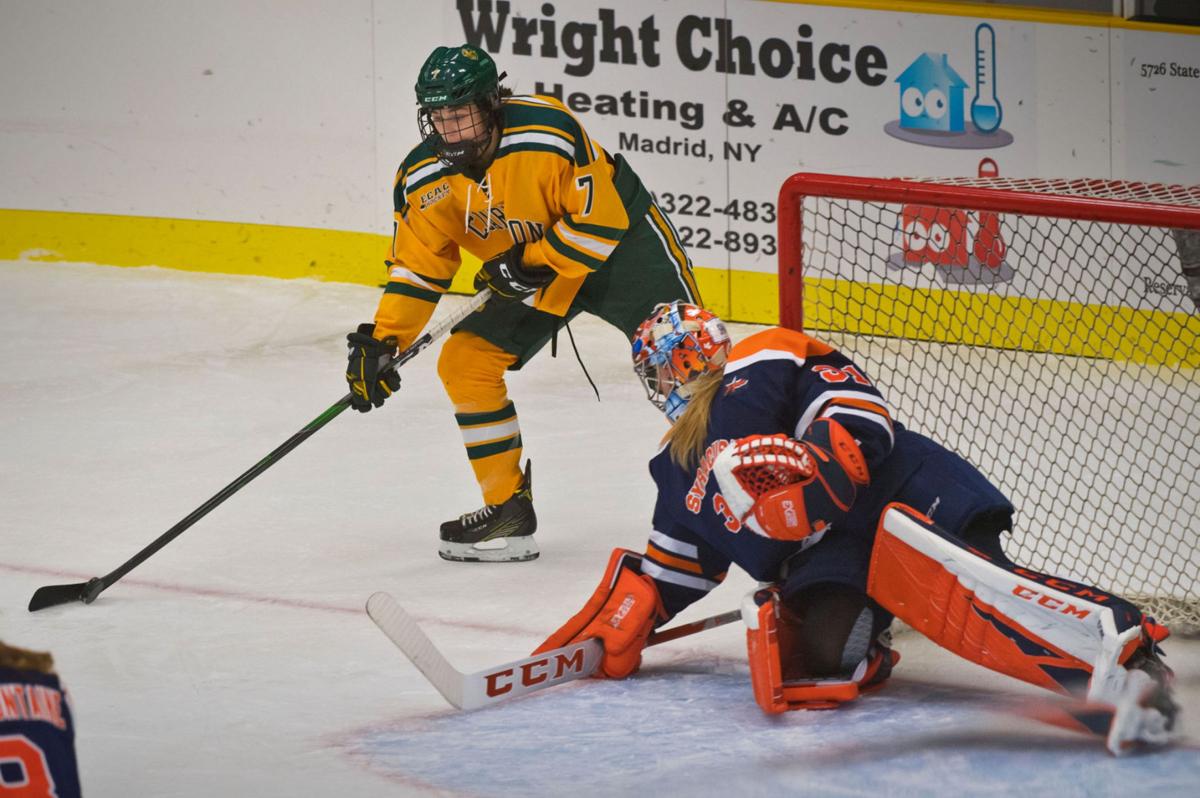 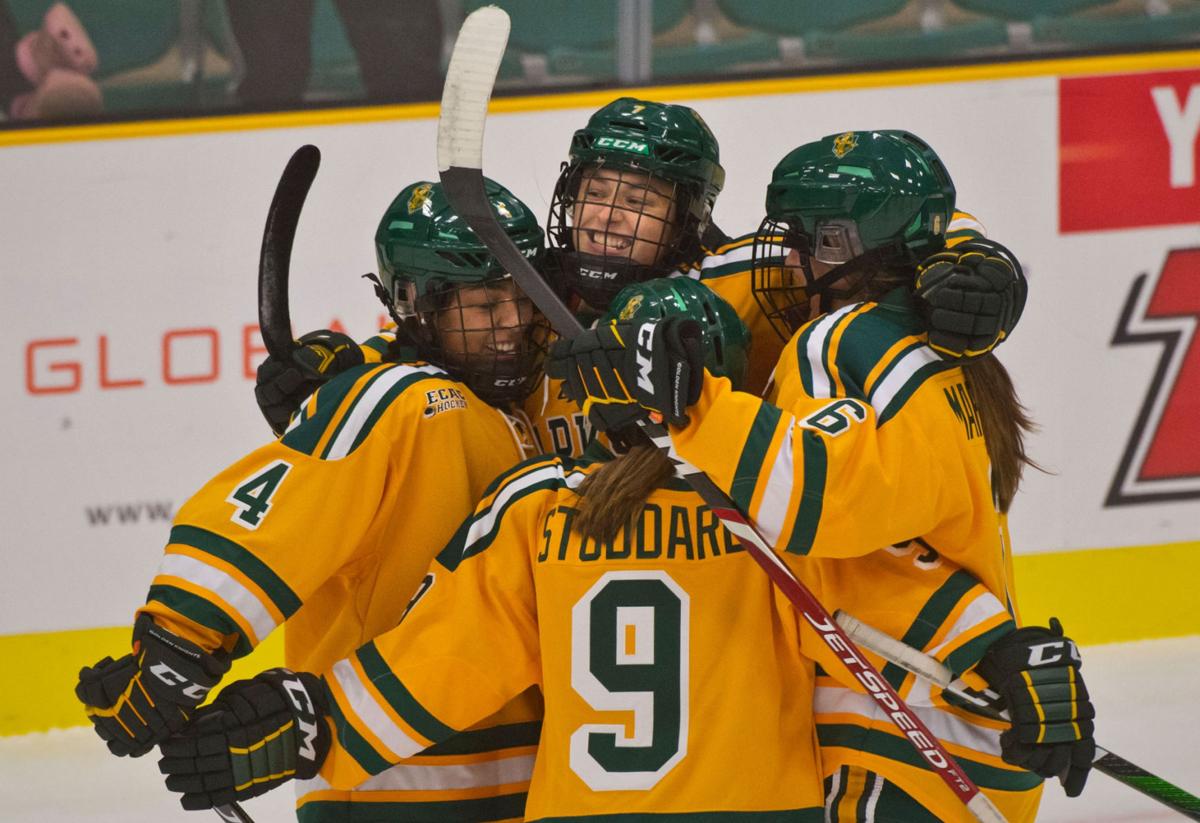 Clarkson’s Elizabeth Giguere is congratulated by her teammates after scoring the first goal of the game against Syracuse on Saturday.Christopher Lenney/Watertown Daily Times 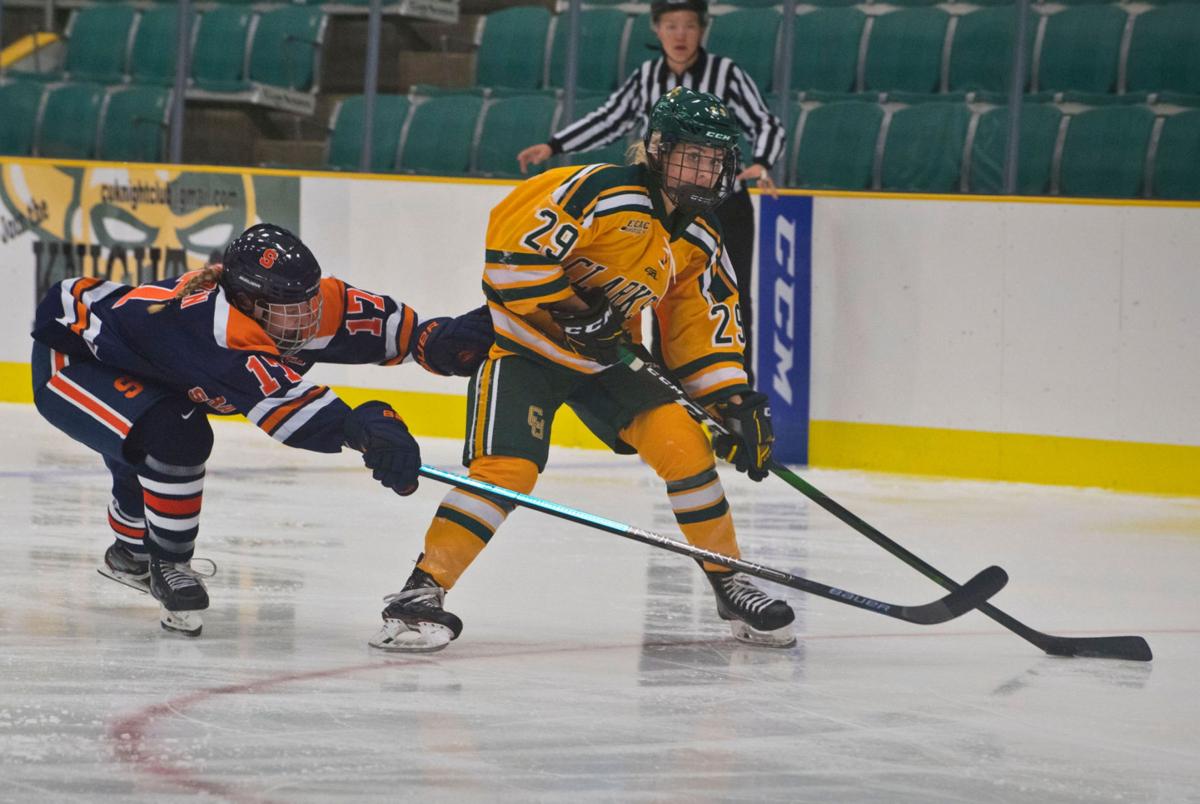 Syracuse’s Madison Beishuizen, left, tries to knock the puck away from Clarkson’s Kayla Friesen, who moves the puck in the offensive zone Saturday.Christopher Lenney/Watertown Daily Times 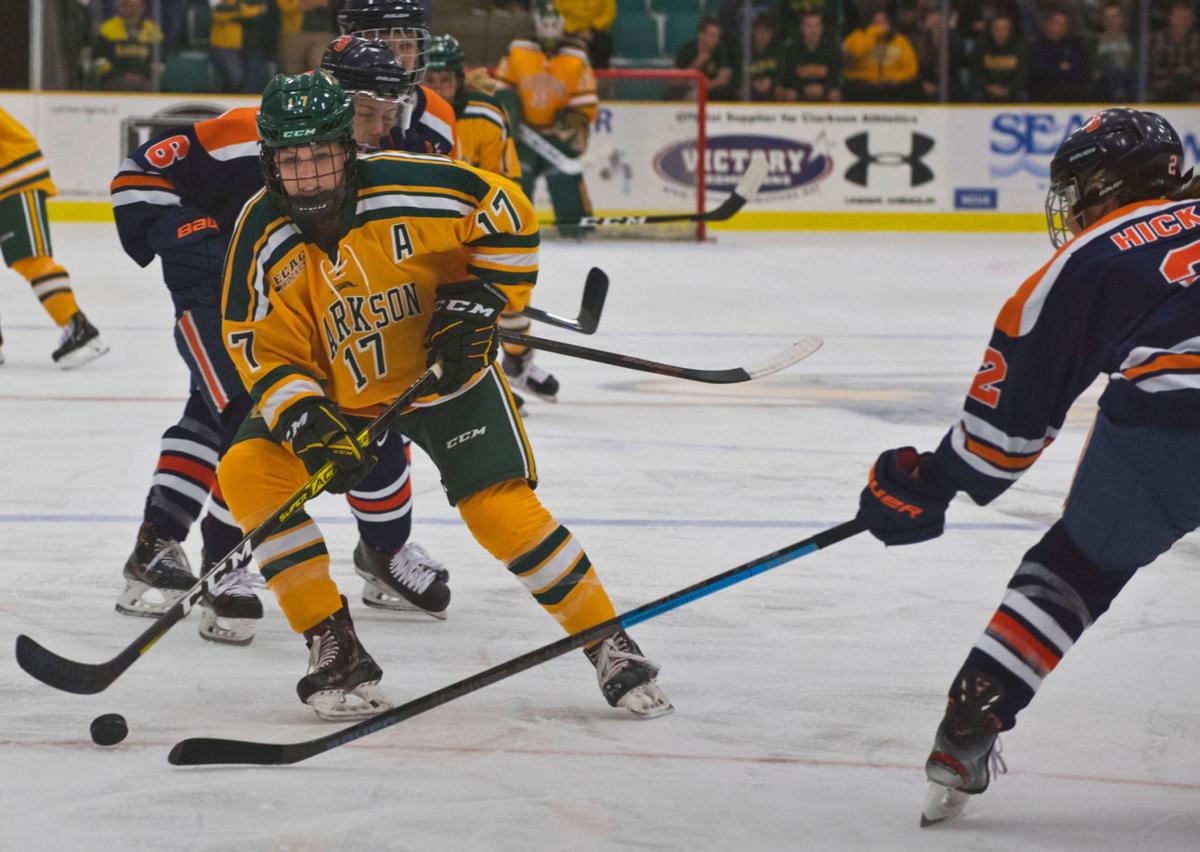 Clarkson’s Taylor Turnquist splits the Syracuse defense as she moves the puck in the offensive zone Saturday.Christopher Lenney/Watertown Daily Times

Clarkson’s Elizabeth Giguere is congratulated by her teammates after scoring the first goal of the game against Syracuse on Saturday.Christopher Lenney/Watertown Daily Times

Syracuse’s Madison Beishuizen, left, tries to knock the puck away from Clarkson’s Kayla Friesen, who moves the puck in the offensive zone Saturday.Christopher Lenney/Watertown Daily Times

Clarkson’s Taylor Turnquist splits the Syracuse defense as she moves the puck in the offensive zone Saturday.Christopher Lenney/Watertown Daily Times

POTSDAM — The returning standouts did their usual work and some newcomers stood out as well as the Clarkson University women’s hockey team enjoyed a comfortable 5-1 victory over Syracuse in the team’s home opener Saturday afternoon.

The win, combined with a 4-3 win Friday in Syracuse, gave the Golden Knights a 2-0 start to the nonconference portion of their schedule.

Elizabeth Giguere and Michaela Pejzlova, the returnees from Clarkson’s top line the last two years, performed the way fans remember, factoring on three of Clarkson’s goals while playing with their second new linemate of the weekend.

Last year the duo played with Patty Kazmaier winner Loren Gabel, but she graduated in May. Friday night Boston College transfer Caitrin Lonergan skated on their line, but she suffered an injury and missed Saturday’s game. Senior Taylor Turnquist took the spot Saturday and scored a goal.

Along with the familiar faces, several of Clarkson’s new players also played a big role this weekend. Kayla Friesen, who transferred from St. Cloud State, scored two goals in each game, leaving her one shy of the five goals she scored last year with the Huskies.

Another transfer, former Ohio State goalie Amanda Zeglen, won her first start after stopping 23 of 24 shots and freshmen Gabrielle David, who comes from the same junior team as Giguere, picked up two assists for the second straight day.

“I thought Clarkson had a lot more intensity,” said Syracuse coach Paul Flanagan, a Canton native and former St. Lawrence University coach. “This is a tough place to play and it’s our first road (game). (Giguere and Pejzlova) are very dynamic, and you get a kid like Friesen, who transfers in, you get the free agent that comes in, I heard her name (scoring) a lot. They lost a lot from last year but it seems like their new kids are fitting in.”

Giguere, who led the nation with 73 points last season, finished the opening weekend with two goals and two assists and was part of two highlight-reel plays Saturday.

She scored Clarkson’s first goal at 15 minutes, 4 seconds of the first period while both teams had a player in the penalty box. Freshman defenseman Stephanie Markowski took a shot that a Syracuse defender deflected behind the net. Giguere picked it up on goalie Allison Small’s stick side, then started to skate om the other direction. When two Syracuse defenders moved in she quickly changed direction, which left her alone beside the crease.

She played with the puck on her stick, moving it back and forth, then put a quick shot past Small.

“Our team came together and I think we worked hard and we did a great job,” Giguere said. “Me and (Pejzlova) are going to have to pick it up and score more goals and stuff since (Gabel) is gone.”

Giguere and Pejzlova’s best play was one where neither scored the goal. During a power play Markowski kept the puck in Clarkson’s zone. Gigure got to it behind the circles, sent a quick pass to Pejzlova, who was near the crease. Pejzlova skated to the edge of the net, causing Small to move with her, then fired a fast pass to Turnquist, who was alone and put the puck into an empty net, giving Clarkson a 3-0 lead.

Said Pejzlova, “I knew she was going to pass it to me, even though she wasn’t looking at me. We can read off of each other. We’ve played together for a while now. We have the chemistry going for sure.”

Friesen scored Clarkson’s final two goals and also set up a nice breakaway goal for Pejzlova late in the first period, giving her five points in her first weekend as a Golden Knight.

“It’s definitely easier with the players I have around me,” Friesen said. “They make me better. We push each other in every direction. I think the culture (at Clarkson) is amazing. They love hockey here. Everyone is supportive, they are like family. We all have the same goal. I know they wanted me to jump in right away and that’s all I tried to do, play my game, play confident.”