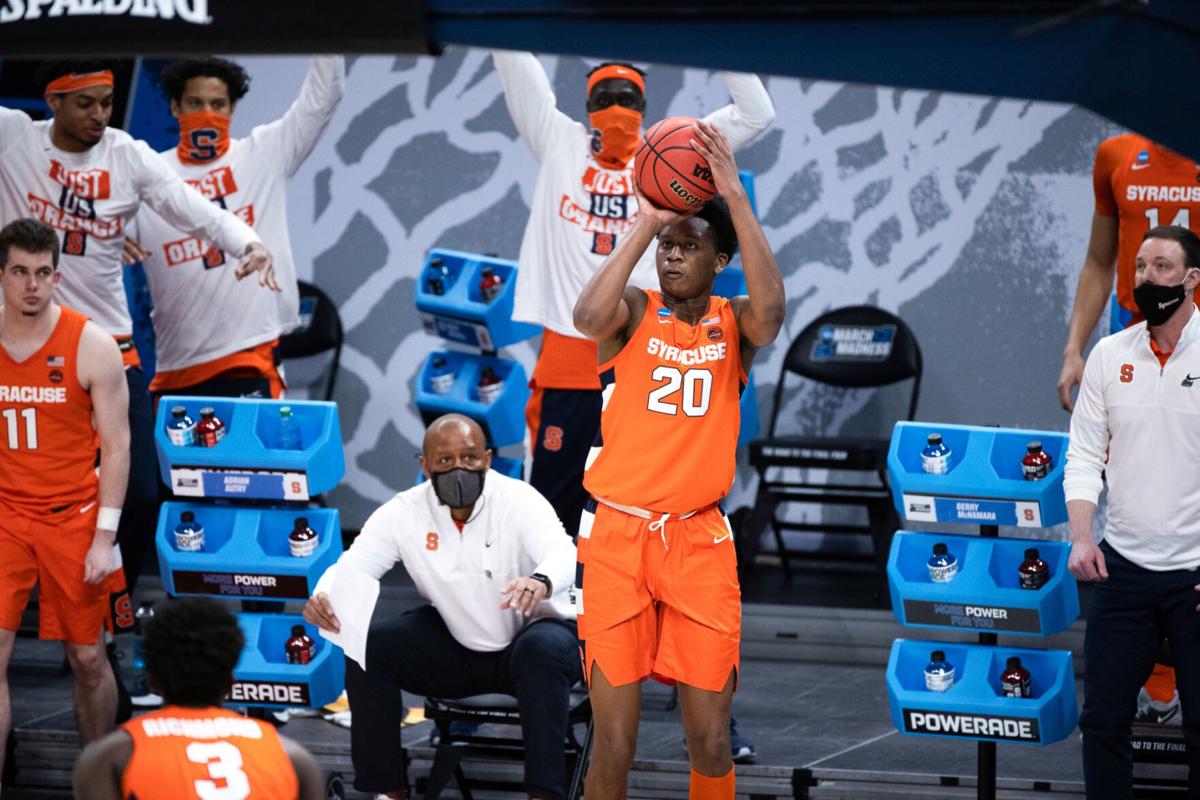 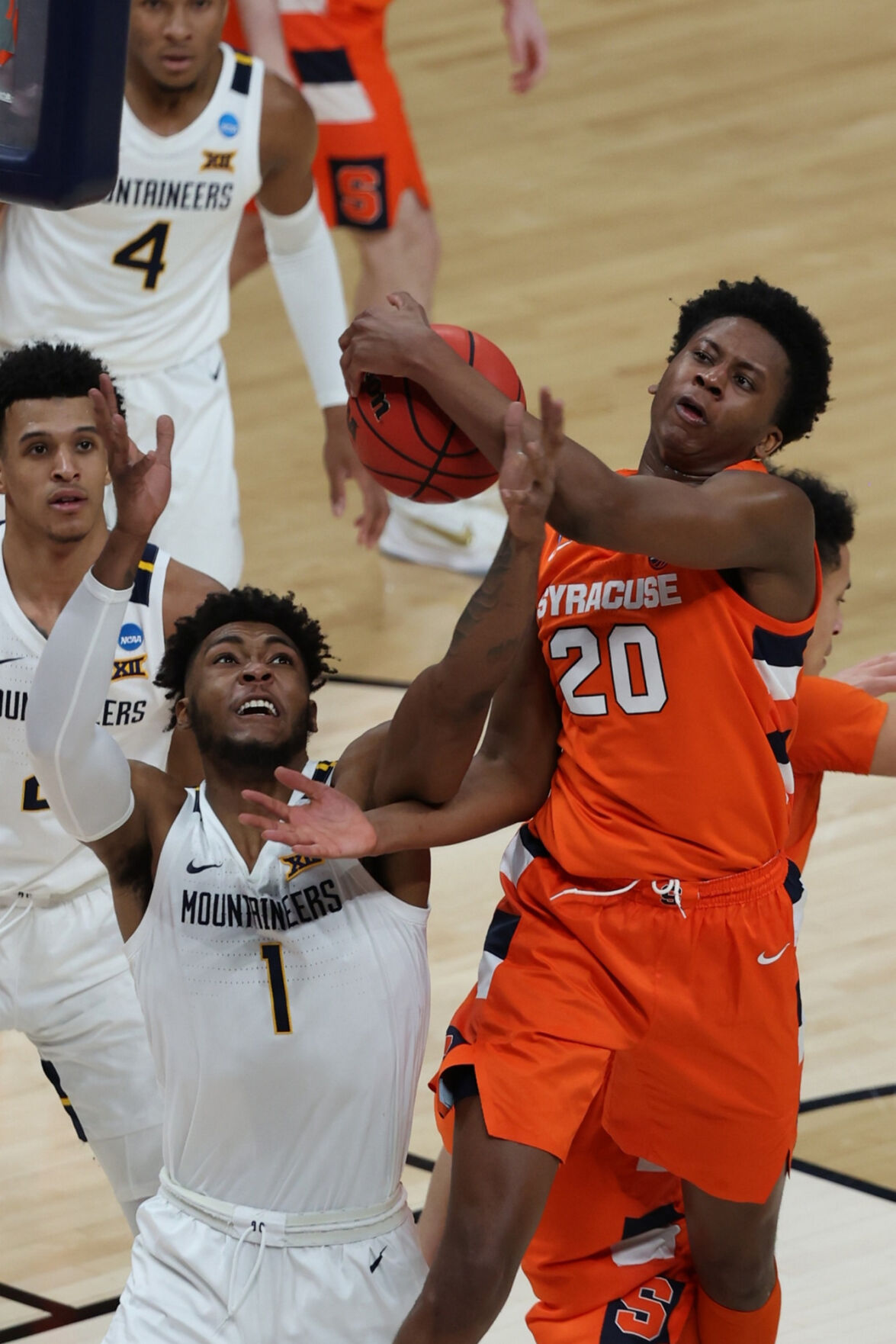 Syracuse’s Robert Braswell, right, and West Virginia’s Derek Culver battle for a rebound in the second round of the NCAA Tournament last Sunday in Indianapolis. Trevor Ruszkowski/USA TODAY Sports 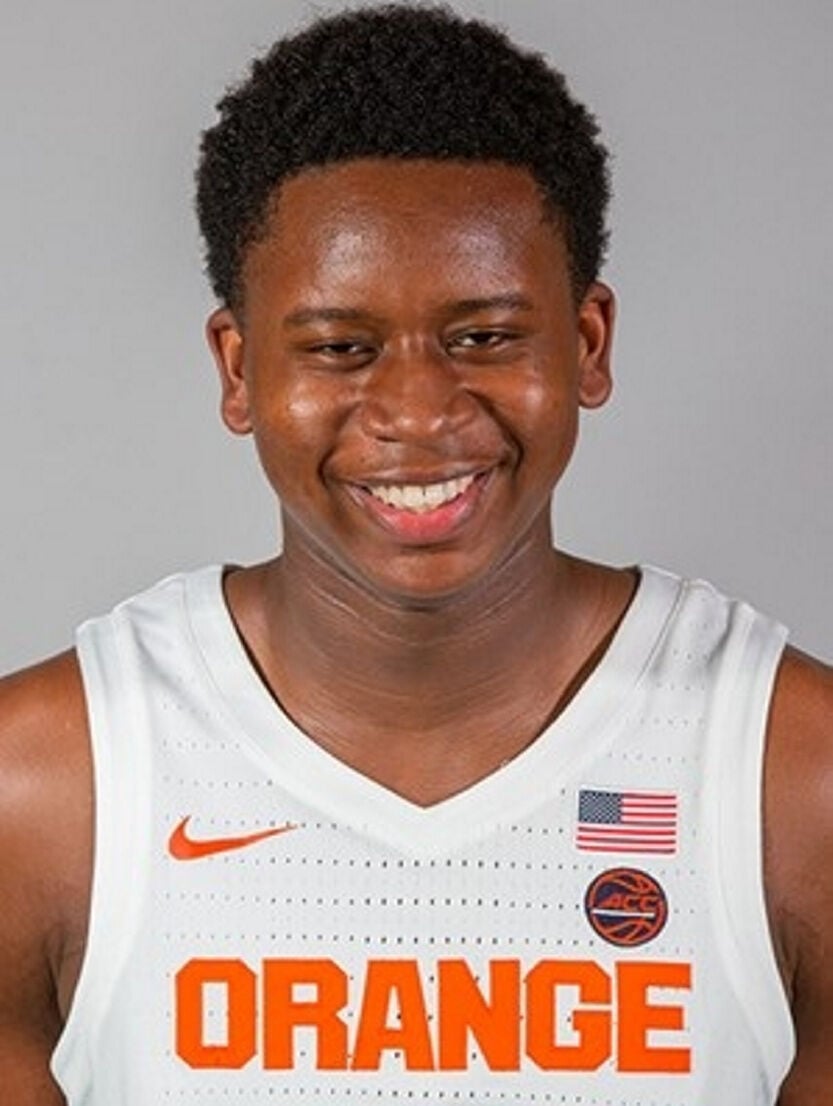 Syracuse’s Robert Braswell, right, and West Virginia’s Derek Culver battle for a rebound in the second round of the NCAA Tournament last Sunday in Indianapolis. Trevor Ruszkowski/USA TODAY Sports

Buddy Boeheim is captivating Syracuse University men’s basketball fans around the country but his low-key roommate, Robert Braswell, is grabbing all the attention from their teammates.

The recent emergence of Braswell off the SU bench has helped push the 11th-seeded Orange (18-9) into the NCAA Tournament Sweet 16 to face the second-seeded and sixth-ranked Houston Cougars (26-3) at 9:55 tonight at Hinkle Fieldhouse in Indianapolis to be televised on TBS.

The redshirt sophomore forward was described by SU coach Jim Boeheim as the “most well-liked guy on the team by a mile,” earlier this week.

“We got here at the same time and I knew right away that I was going to like him,” Buddy Boeheim said. “He’s got a quiet feel to him but once you get to know him, he really opens up. He’s very funny, has a great personality, he’s really caring, and you’ll never hear him say something mean.”

Braswell’s popularity in the locker room is apparent when looking toward the SU bench whenever he knocks down a shot or makes a play on defense. Most or all the team will jump and react as if they witnessed a buzzer-beater, regardless of game time or score, always eager to cheer on his contributions.

The laid-back Braswell rarely reciprocates, however, maintaining a focused demeanor while getting ready for the next play in his now-signature stoic fashion.

Buddy Boeheim said that in contrast to his fiery backcourt mate — sophomore guard Joe Girard III — if he gets so much as a fist bump from Braswell after a play, he knows something major just happened.

“He’s really gotten better, I’m proud of him, and so happy to see his success because I know how great of a person he is,” Buddy Boeheim said. “That’s my guy, he’s the best teammate you could ask for, so it’s a lot of fun when you see him make plays and he’ll have no reactions ever.”

In addition to his unassuming nature, teammates appreciate what Braswell endures to get on the court.

He was forced to shut his season down after seven games last year due to unexplained leg pain and tightness, an issue he has learned to cope with while still searching for answers and remedies, as SU coach Jim Boeheim revealed this week.

“He’s in pain every time he plays, whether he’s at practice today or he plays in a game, there’s not much, or nothing, really, we’ve tried every option, we’ve talked to the best specialists in the country,” he said.

“He is playing well, and I think if that could be fixed, he’d be twice as good of a player as he is now,” Boeheim continued. “It’s very hard when it hurts to run and jump, he has overcome a lot of pain and issues to be able to play.”

Braswell has registered his four highest minute totals this season over the past four games, averaging 25 per night in that span after failing to log more than 20 in any outing before the start of the Atlantic Coast Conference Tournament.

He is scoring 8.2 points along with a 1.8 average 3-pointers per game in that span while shooting 63 percent from the field and 50 percent from long range. Braswell has made seven combined 3-pointers over his last four after recording a total of 10 in SU’s previous 23 games.

He has made an impact on both ends with his positioning and movement on defense, which has factored into the recent spark in SU’s 2-3 zone. His propensity to take the open shot or quickly keep the ball moving has also helped offensive flow.

“If he gets an open shot, he’s certainly capable of making it, but I think his overall defensive presence and just his fit into what we’re doing on both ends of the court has been really, really good,” Jim Boeheim said. “He has been very valuable in these last couple of games.”

The winner will advance to the NCAA Elite Eight to face the winner of today’s other Midwest Region matchup — No. 12 Oregon State or No. 8 Loyola-Chicago — at a time to be determined Monday night.

Syracuse is making its 20th Sweet 16 appearance in Jim Boeheim’s 45 seasons as head coach and aiming for its seventh trip to the Elite Eight in his tenure. SU last advanced past the Sweet 16 when it reached the 2016 Final Four.