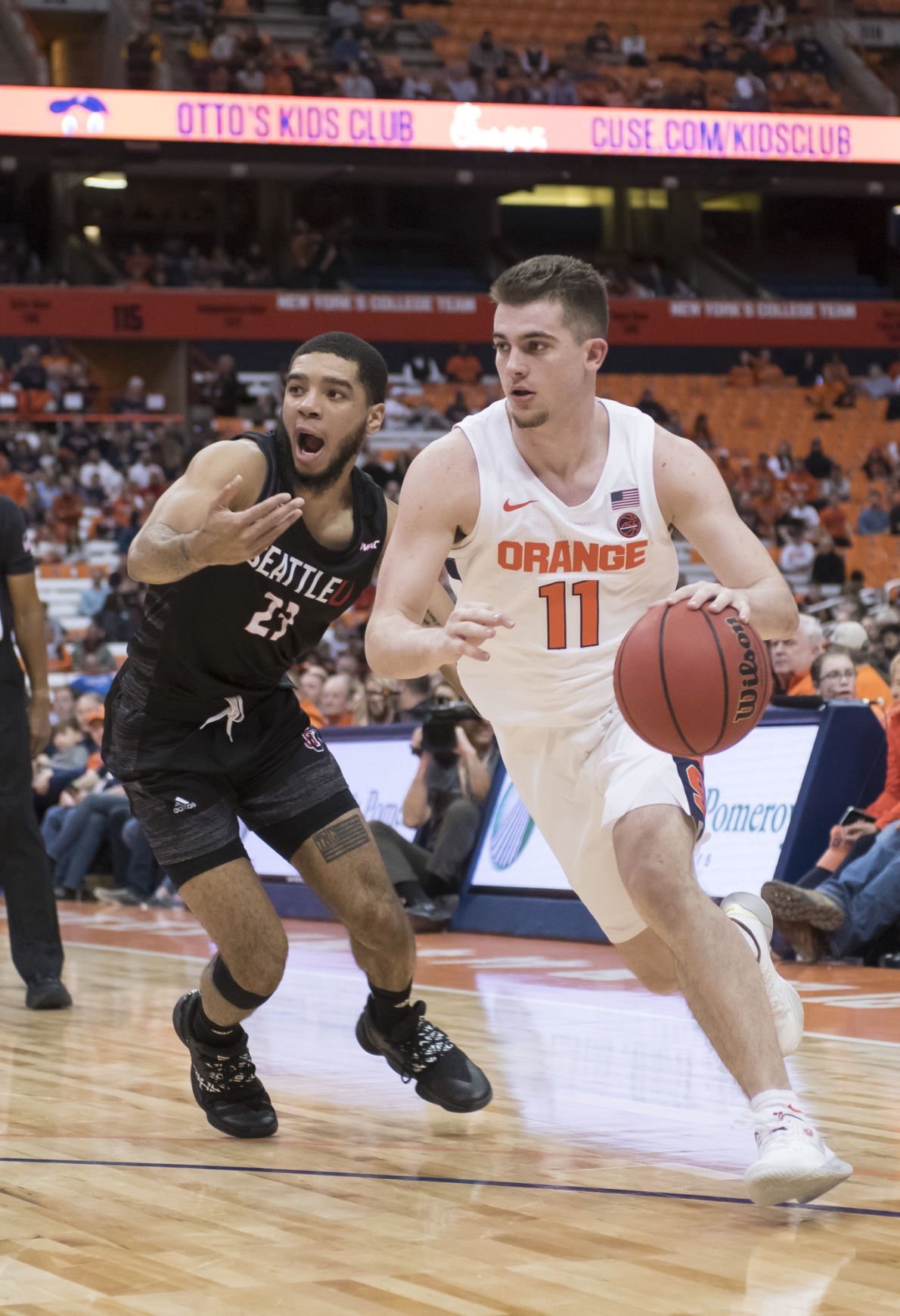 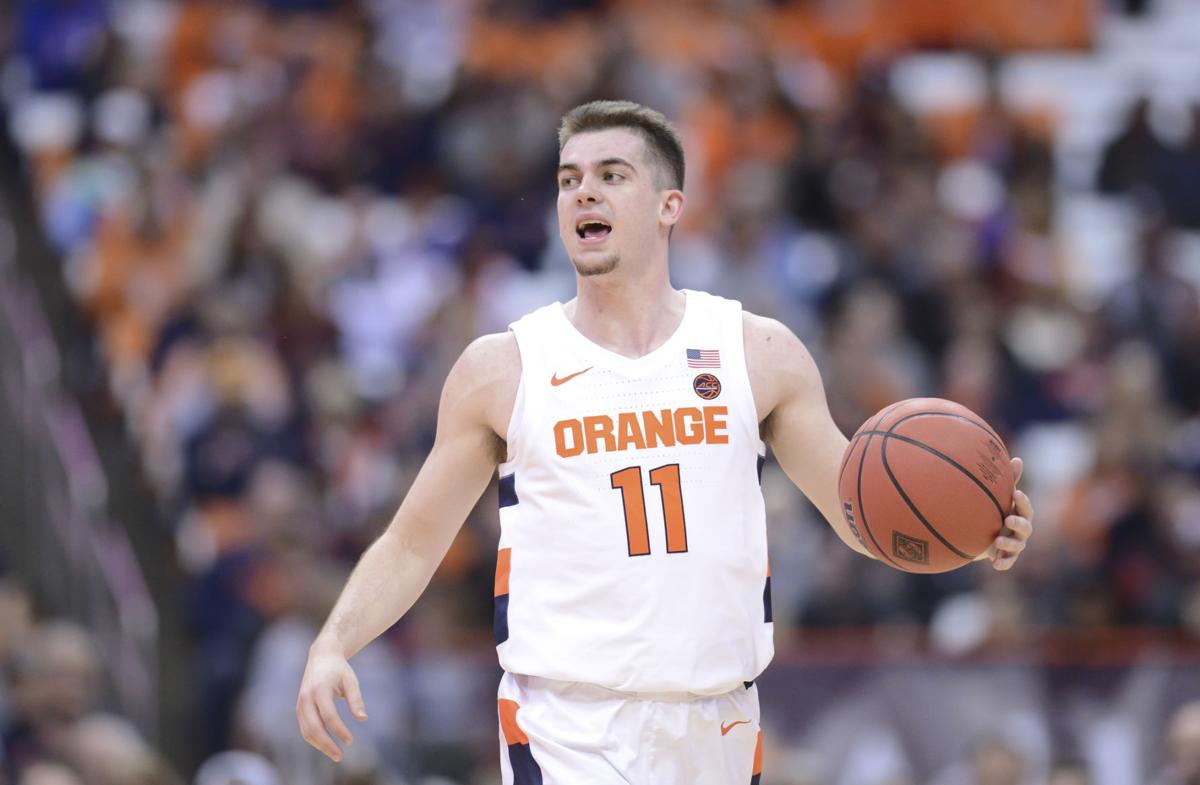 Syracuse’s Joseph Girard III brings the ball up court against Seattle in the second half Saturday at the Carrier Dome. Mark Konezny/USA TODAY Sports 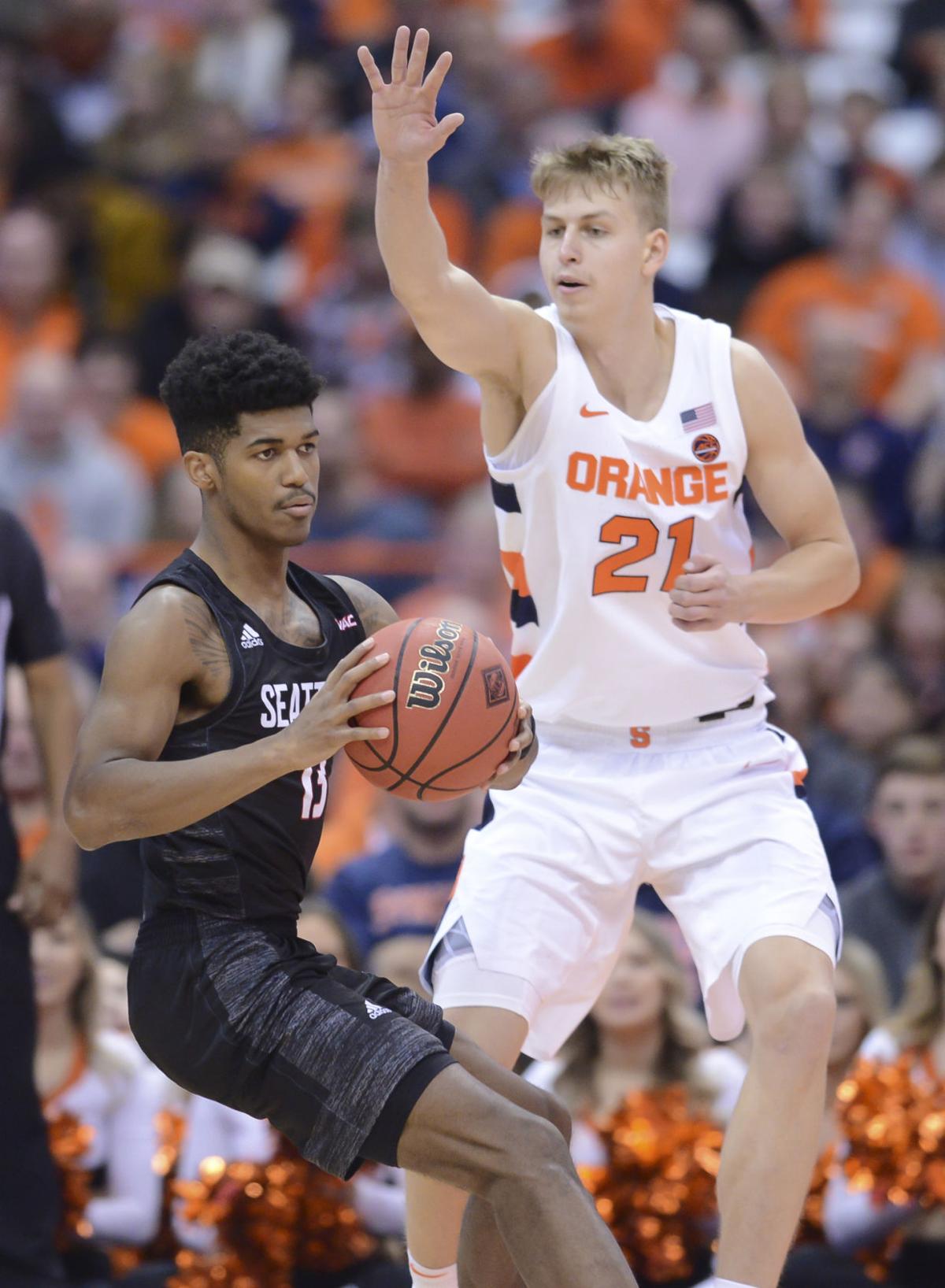 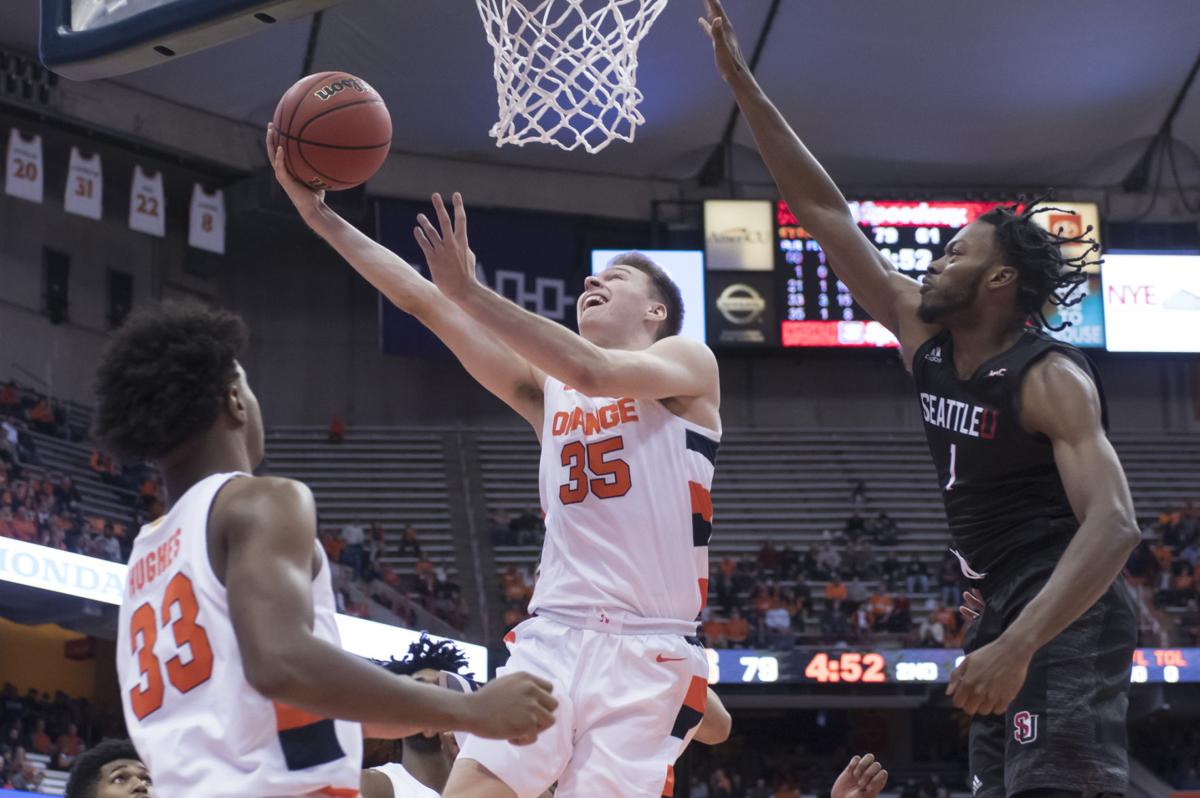 Syracuse’s Buddy Boeheim makes a lay up as teammate Elijah Hughes and Seattle’s Myles Carter defends in the second half Saturday at the Carrier Dome. Mark Konezny/USA TODAY Sports 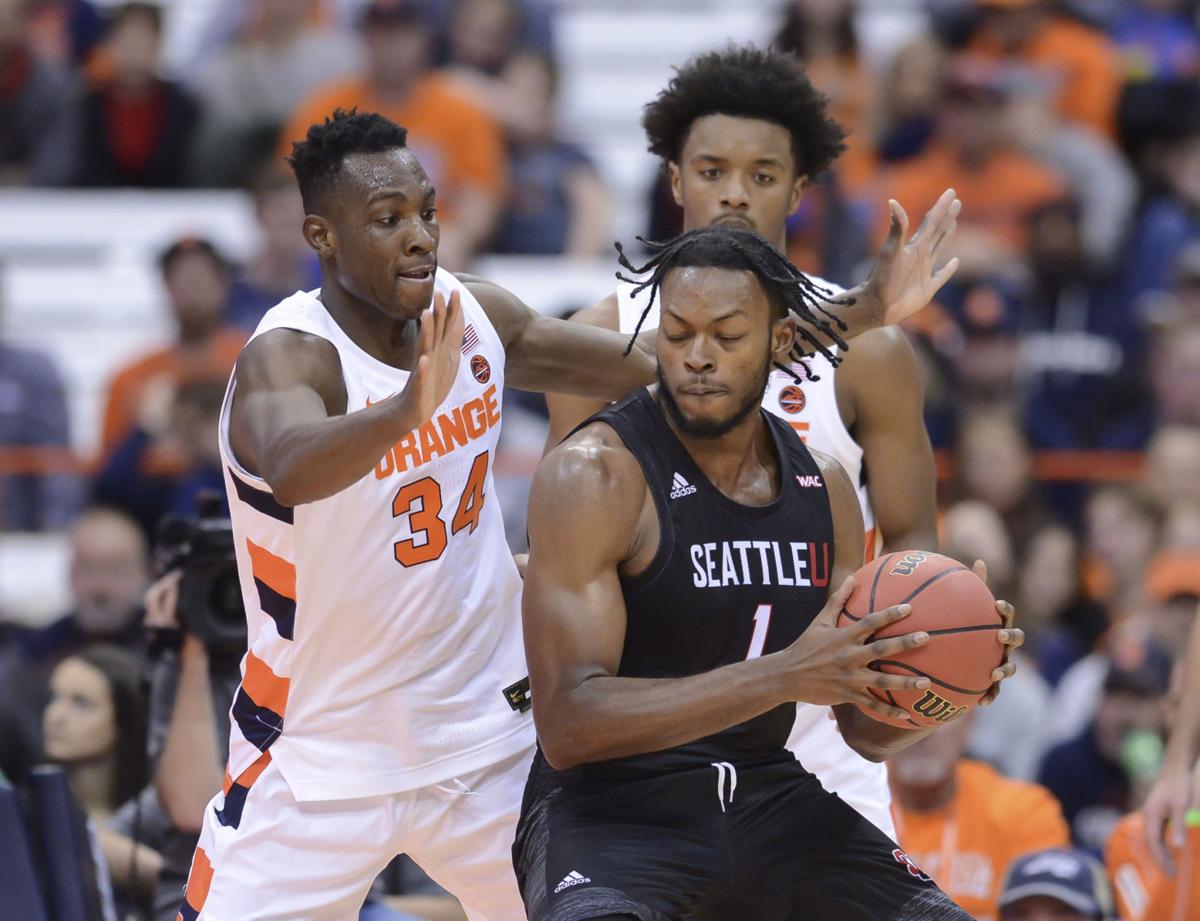 Syracuse’s Joseph Girard III brings the ball up court against Seattle in the second half Saturday at the Carrier Dome. Mark Konezny/USA TODAY Sports

Syracuse’s Buddy Boeheim makes a lay up as teammate Elijah Hughes and Seattle’s Myles Carter defends in the second half Saturday at the Carrier Dome. Mark Konezny/USA TODAY Sports

SYRACUSE — Joe Girard III was nearly perfect in his first career start for the Syracuse University men’s basketball team on Saturday night in the Carrier Dome.

The freshman point guard from Glens Falls scored a team-high 24 points — finishing 7-for-8 from the field and 5-for-6 on 3-point field goals — to lead the Orange to an 89-67 nonconference victory over Seattle in front of 21,487 fans for the opening round of the NIT Season Tip Off.

Girard led five players in double figures scoring for the Orange (2-1 overall), which will host Cornell in its next game at 7:30 p.m. Wednesday at the Dome.

“That kid is something else,” SU star junior Elijah Hughes said of Girard III. “He’s not scared of nothing, he’s not scared to take what could be a bad shot or make a bad play and get yelled at, he’s going to go out there and do it. He made some really good plays tonight and he also made shots, so when you got those two things going, it’s going to be hard to stop.”

Marek Dolezaj scored 19 points to go with seven rebounds, four assists and three steals for SU, which posted its highest scoring total of the early season and topped its 34-point effort from the season-opening loss to No. 9/11 Virginia just 14 minutes into Saturday’s win over the Redhawks (2-3).

Girard added five rebounds, two steals, and two assists, and orchestrated a faster pace while infusing SU’s starting five with a noticeable uptick in energy throughout. During the first 10 minutes of the game, Girard III dove into the front row behind the basket for a loose ball, endured contact on two attempts to draw charges, and had gained a possession by forcing a jump ball after battling for a loose ball.

Girard entered SU with much fanfare after he shattered the previous state high school record for most career points (4,763), which ranks 10th all-time nationally, according to the National Federation of High Schools. He led the Glens Falls Indians to Class B state championships in football (2016, 2018) and basketball (2019).

“Like I said last game, coach is going to put you in and it’s about what you do when you’re in there,” Girard III said. “Tonight at the beginning of the game I started, and that’s obviously everybody’s dream and everybody’s goal, but I just have to produce when I’m in there and help the team win games.”

The lifelong Orange fan added: “(Being introduced with the starters) was really cool, but it was just fun to go out there and win the game, and do whatever I could to help the team.”

Seattle made six of its first seven 3-point attempts in the second half to cut SU’s 18-point halftime advantage down to seven points. But Girard III scored off the dribble with a shot over two defenders at the rim to extend the edge back to nine and increase his point total to 21 while maintaining a perfect field-goal percentage. Girard III’s first miss came with 9:46 left in the game, at which point SU held a 67-54 advantage.

“My biggest thing is competing and my biggest thing is, I really hate to lose,” Girard III said. “At that time I thought we needed a big play and I kind of wanted to be the one to make it. If it wasn’t me or I didn’t get the opportunity to make it, that’s fine, because we have a lot of playmakers around me, but at the same time, the opportunity was there for me to take it and the play was there.”

Freshman Bryce Goodine played 13 minutes at point guard in relief of Girard III and was the only player besides Guerrier to play significant minutes off the bench. Fellow freshman, Jesse Edwards, logged six minutes as the only other player to appear off the bench prior to the final minute of the lopsided outing.

“It starts in practice, he has to play well in practice and then he has to get an opportunity in games, which he will, and then he has to play well,” SU coach Jim Boeheim said of the potential for Carey to regain a meaningful role. “He hasn’t played well in the time he’s had. The best players are going to play, and I’m not going to be talking much more about anybody besides the guys that are playing. The guys playing are the guys that we think give us the best chance to win right now.”