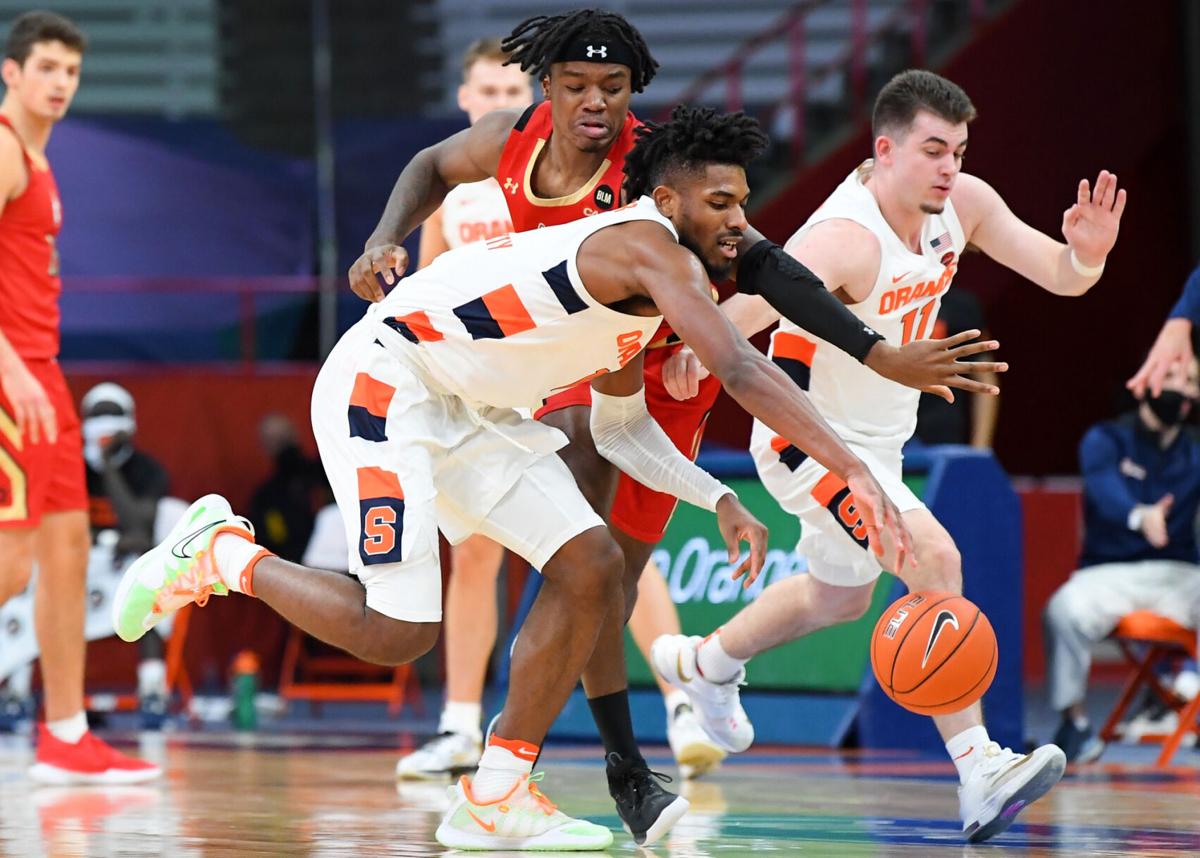 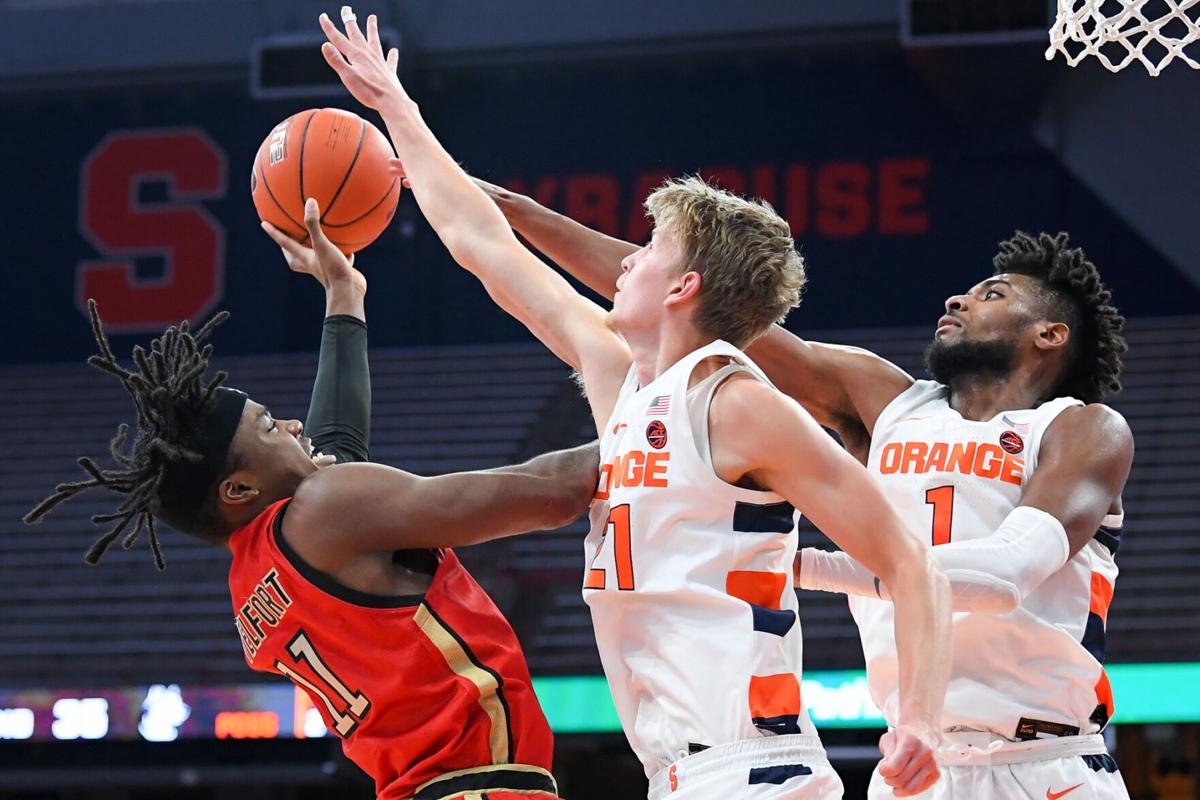 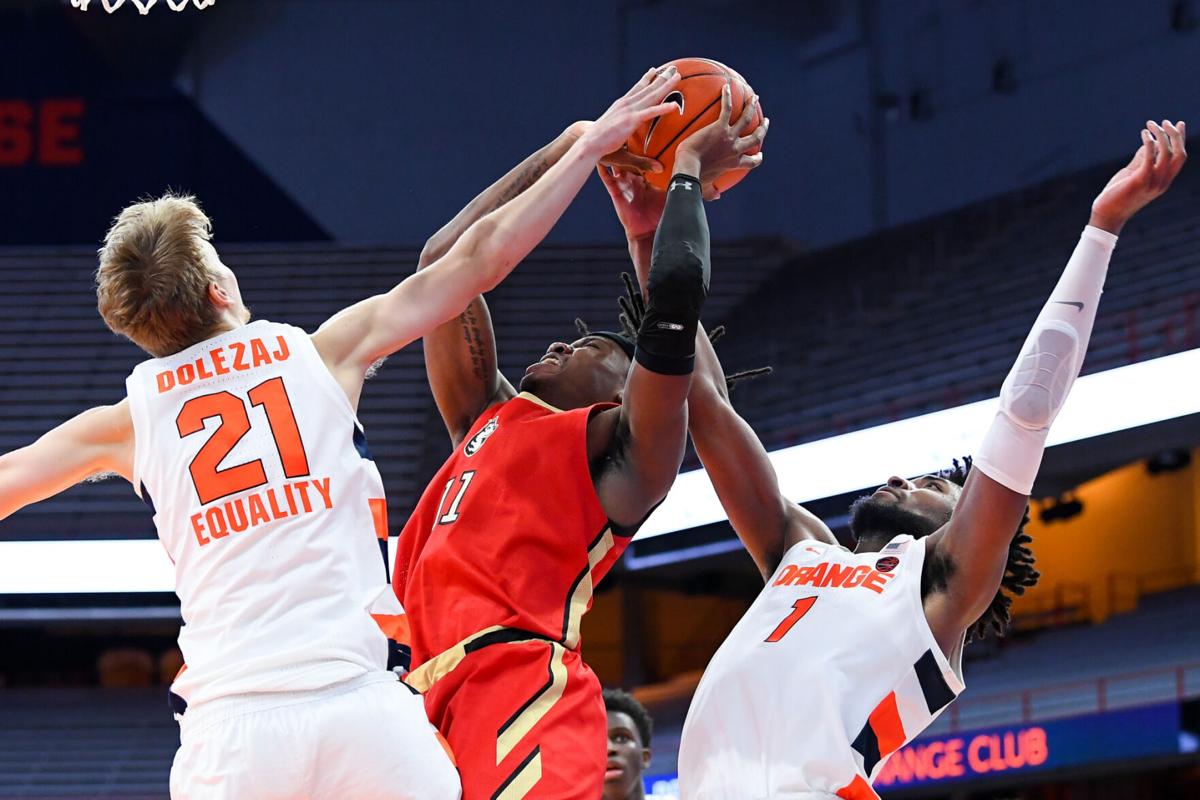 Syracuse forward Marek Dolezaj, left, and forward Quincy Guerrier, right, combine to block the shot of Northeastern guard Jahmyl Telfort, middle, during the second half of Wednesday’s game at the Carrier Dome. A foul was called on the play. Rich Barnes/USA TODAY Sports

Syracuse forward Marek Dolezaj, left, and forward Quincy Guerrier, right, combine to block the shot of Northeastern guard Jahmyl Telfort, middle, during the second half of Wednesday’s game at the Carrier Dome. A foul was called on the play. Rich Barnes/USA TODAY Sports

SYRACUSE — Quincy Guerrier collected a career-high 16 rebounds and added 18 points, including the go-ahead dunk with 8:40 left Wednesday as host Syracuse fended off an upset bid by Northeastern and escaped with a 62-56 noconference victory at the Carrier Dome.

Joseph Girard III went 9-for-9 from the free throw line and led all scorers with 21 points for Syracuse (5-1), which won despite shooting just 31.7 percent from the field, including 24.1 percent in the second half. Girard also had six steals.

Buddy Boeheim and Alan Griffin each struggled to score as the Orange made just 2 of 18 shots from behind the arc after hitting a program-record 16 total 3-pointers last Saturday in a win over Boston College.

“It shows that we’re tough, gritty, know how to win, obviously it wasn’t the way that we wanted but in college basketball, a win is a win,” Girard III said. “We’re proud of that but at the same time we know that we have to play better on both ends of the floor.”

Marek Dolezaj finished with 14 points for SU, which will host Buffalo at 6 p.m. Saturday in the same location. No fans will be permitted, as has been the case all season, due to state COVID-19 mandates.

Buddy Boeheim made just 1 of 12 shots for a two-point outing, while Griffin was held scoreless on 0-for-4 shooting. The duo averages a combined 28.6 points per game and are among the top three scorers for SU.

Griffin was on the bench for the final nine minutes as SU edged out the victory.

“Tonight we came out and we didn’t get to loose balls, Alan was in a funk from the opening tip,” Syracuse coach Jim Boeheim said, “He just wasn’t in the game in any way, shape or form, and he can’t let his offensive problems dictate how he plays.”

Jahmyl Telfort scored 16 points off the bench and was the lone player in double figures for Northeastern (1-2). Coleman Stucke had nine points and five assists while Greg Eboigbodin pulled down 10 rebounds.

Northeastern, employing a patient offense and an ability to find open 3-pointers over the Syracuse zone, led for much of the first half. The Huskies were 7 of 18 from 3-point land and took just eight shots from inside the arc in the first 20 minutes while opening a pair of six-point leads.

Syracuse held a 32-31 halftime edge following with a 13-6 run to end the half. Dolezaj opened the surge with a pair of baskets and ended it with a dunk.

Shaquille Walters opened the second half with a long 2-pointer for Northeastern, which led for almost all of the first 12 minutes as Syracuse missed 13 of its first 14 shots. But Northeastern, which lost point guard Tyson Walker with 18:32 left after he hit his head against Girard’s knee while diving for a loose ball, scored on just five of its first 15 possessions and never led by more than five in the second half.

Kadary Richmond hit one of two free throws with 10:06 left to cut Northeastern’s lead to 44-41 and begin the game-turning 20-9 run for Syracuse. Guerrier hit two free throws to narrow the Huskies’ lead to a point before putting home an alley-oop feed from Richmond.

Northeastern stayed within a possession until Dolezaj’s second-chance basket with 2:09 left put Syracuse up 57-53. Girard stole the ball from Telfort on the next possession and converted a three-point play for the Orange, which led by at least four the rest of the way.

“The bottom line is we have to be way better on offense to have any hope of success,” Syracuse coach Jim Boeheim said. “It’s good to sneak this out and get this one, but it’s not a good sign.”