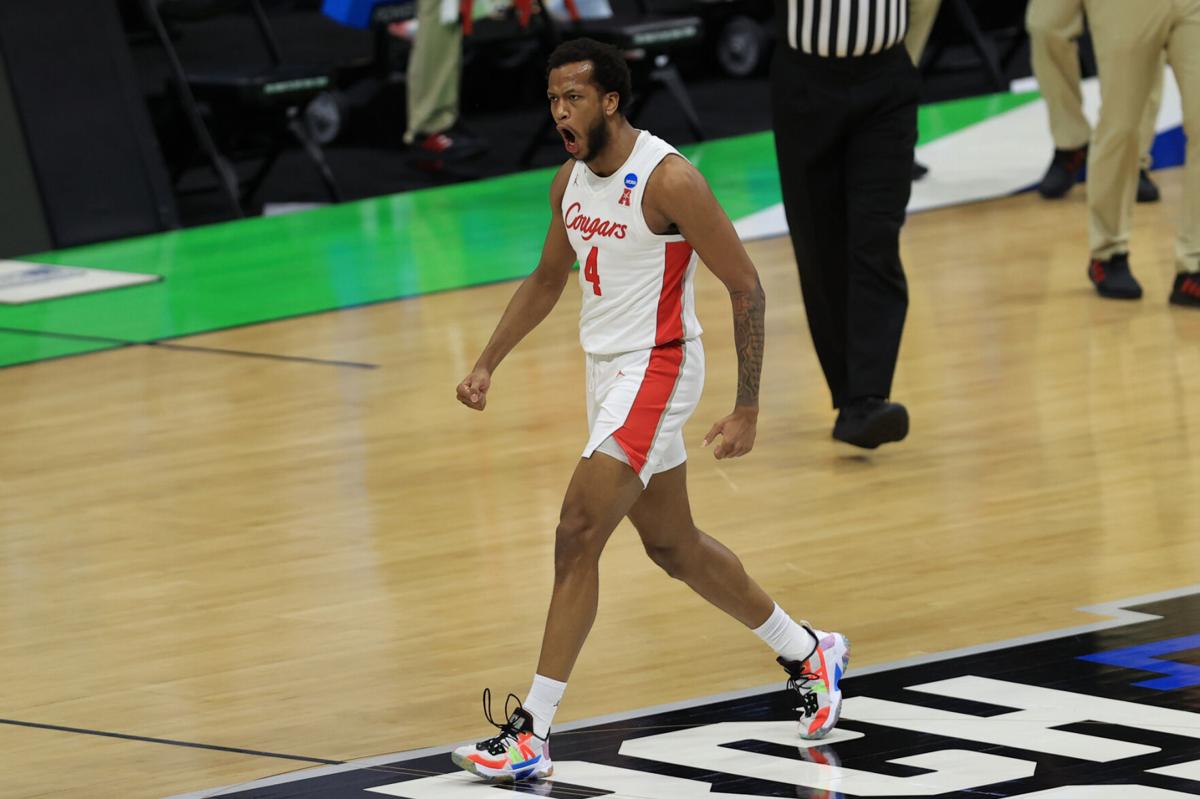 Houston forward Justin Gorham celebrates during the second round of the NCAA Tournament against Rutgers last Sunday in Indianapolis. Aaron Doster/USA TODAY Sports 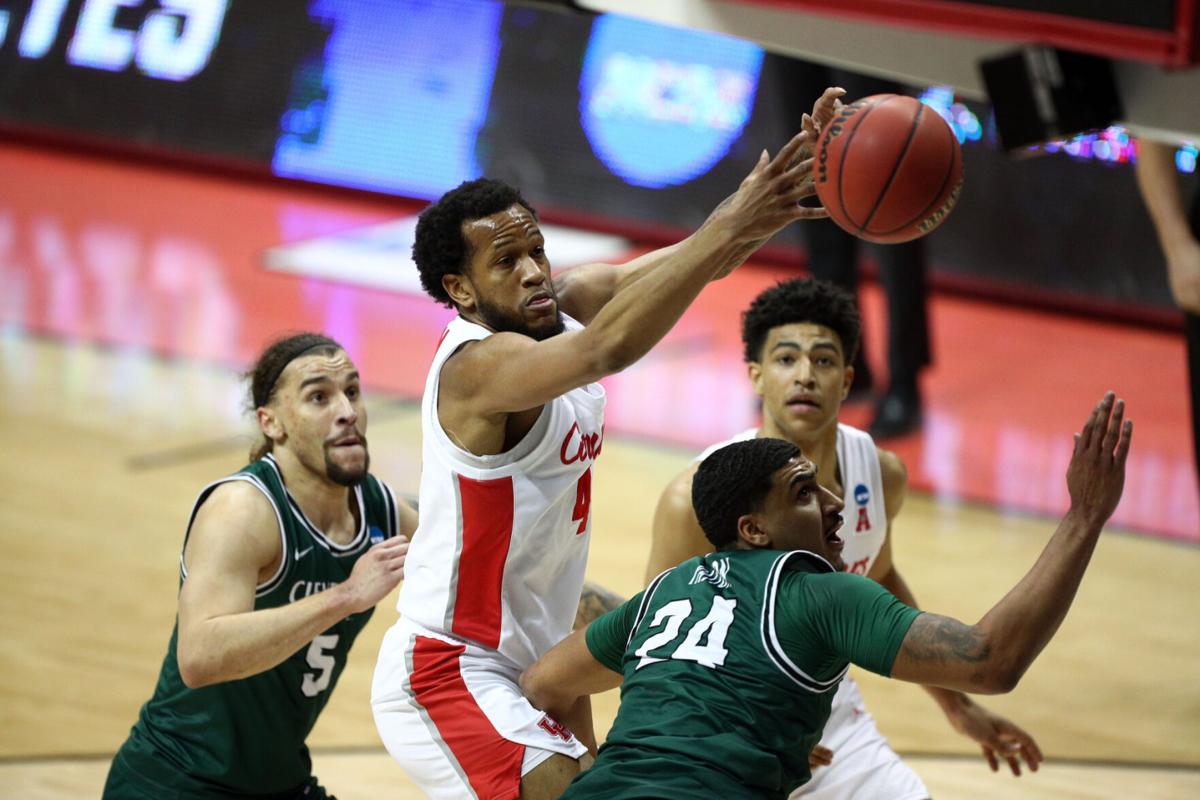 Houston’s Justin Gorham, center, plays for the ball against Cleveland State during the first round of the NCAA Tournament on March 19 in Bloomington, Ind. Jordan Prather/USA TODAY Sports 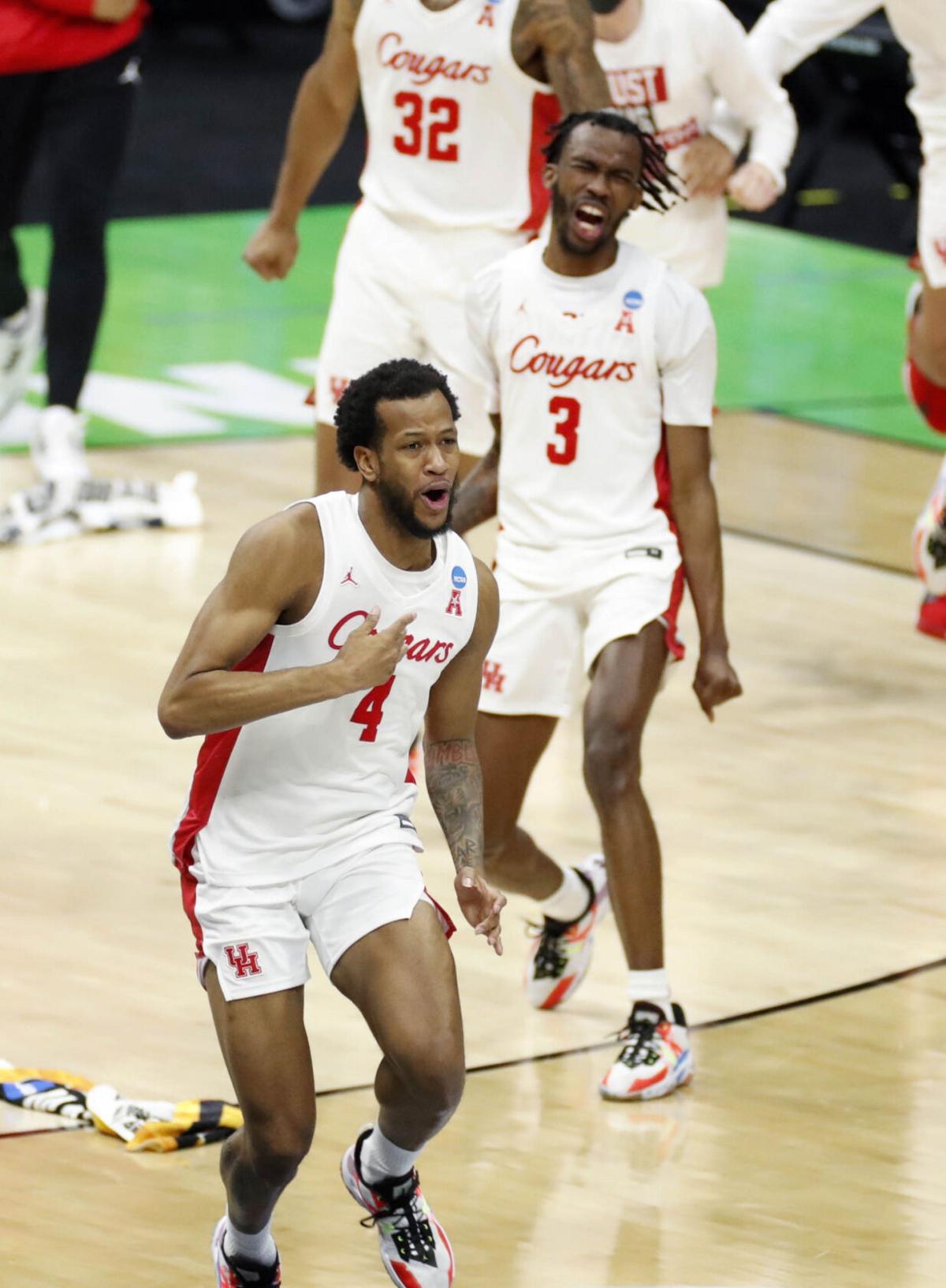 Houston’s Justin Gorham, left, celebrates Sunday’s win over Rutgers with teammate DeJon Jarreau during the second round of the NCAA Tournament in Indianapolis. Michael Caterina/IndyStar via USA TODAY Sports 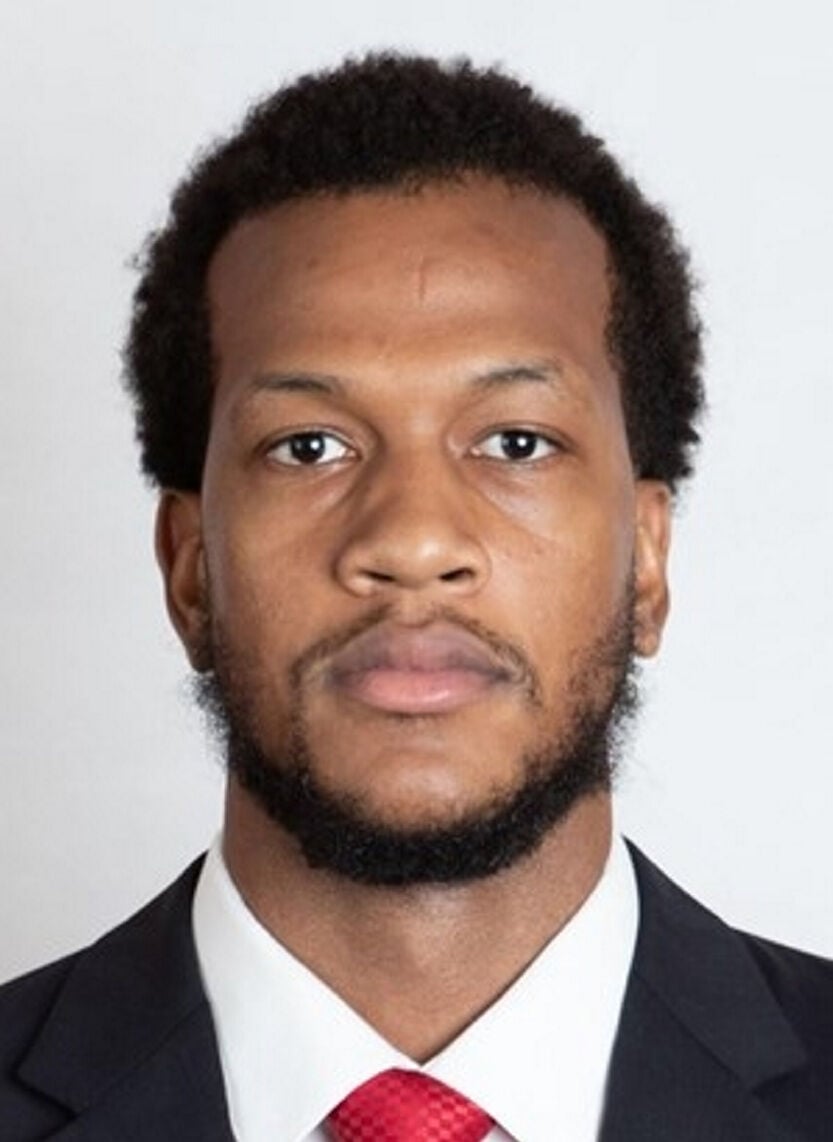 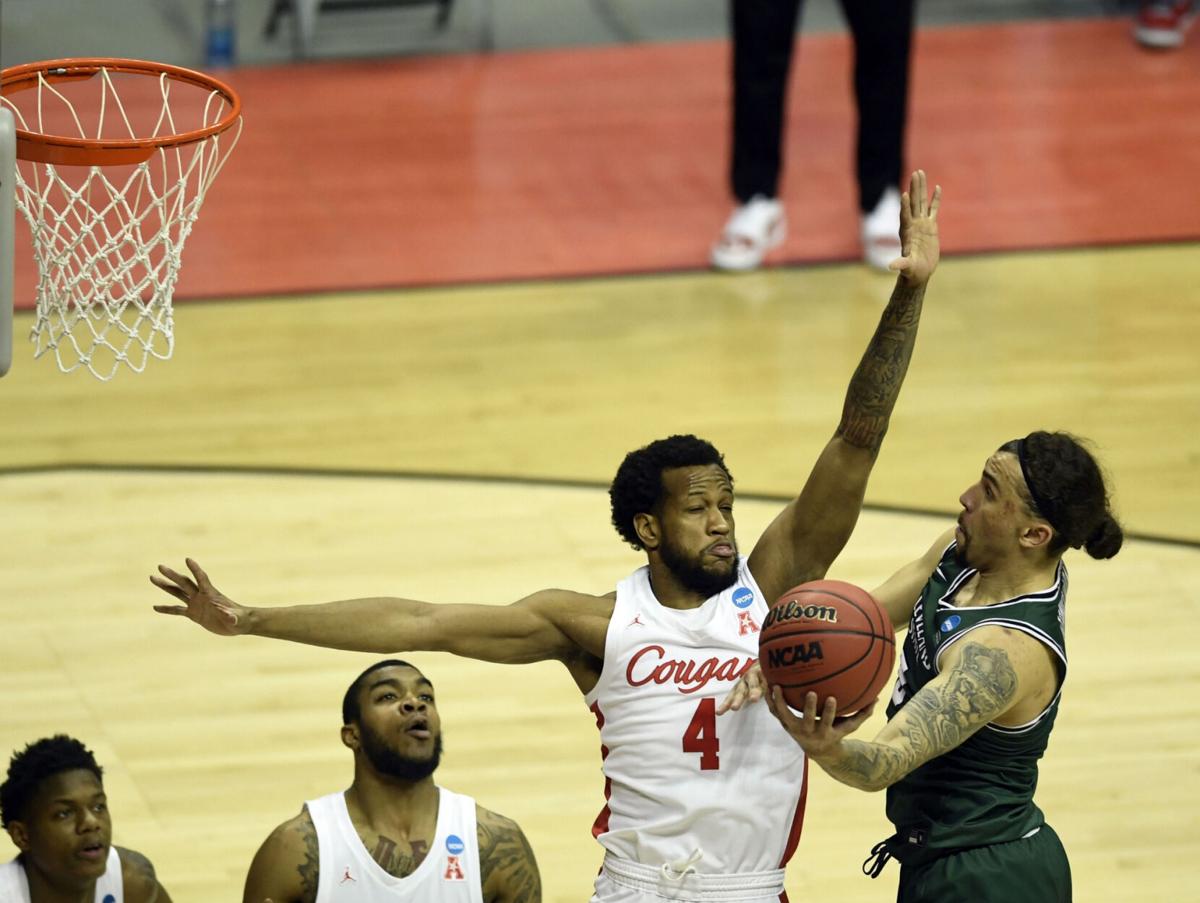 Houston forward Justin Gorham celebrates during the second round of the NCAA Tournament against Rutgers last Sunday in Indianapolis. Aaron Doster/USA TODAY Sports

Houston’s Justin Gorham, center, plays for the ball against Cleveland State during the first round of the NCAA Tournament on March 19 in Bloomington, Ind. Jordan Prather/USA TODAY Sports

Houston’s Justin Gorham, left, celebrates Sunday’s win over Rutgers with teammate DeJon Jarreau during the second round of the NCAA Tournament in Indianapolis. Michael Caterina/IndyStar via USA TODAY Sports

Syracuse University men’s basketball fans are accustomed to Buddy Boeheim looking toward the bench for inspiration from his dad and SU coach Jim Boeheim.

Justin Gorham, the 6-foot-7 and 225-pound redshirt senior forward for the Houston Cougars, has found that same fatherly push in his heart during the NCAA Tournament.

Gorham is the nation’s third-leading offensive rebounder and embodies the tenacity of the second-seeded and sixth-ranked Cougars (26-3), who are set to face Boeheim’s 11th-seeded Orange (18-9) in the Sweet 16. The Midwest Region matchup is slated to tip at 9:55 Saturday night at Hinkle Fieldhouse in Indianapolis, and will be televised on TBS.

Gorham spoke of the influence his dad — Jerry Gorham, who died of cancer in 2016 just before the start of Justin’s freshman season at Towson — played on his career path during a Zoom conference with media this week.

“He put the basketball in my hands,” Gorham said. “Coaching me when I was younger, he stopped in high school so he could really watch me, but my senior year, he couldn’t attend any basketball games, even my last year on the AAU circuit, my mom would go and FaceTime him.”

Gorham, who was recently named the Most Improved Player in the American Athletic Conference, said he used to watch NCAA Tournament games with his dad and now plays with his presence in mind.

“It was tough, because normally I would look on the sideline and he was the one yelling, trying to coach me, but I just think about him every day,” Gorham said. “He would want me to go on the court and play hard. He would love to see me at this stage.”

Gorham has started all 29 games, averaging a team-high 8.8 rebounds and 3.7 on the offensive glass, while fueling the formula of winning with grit and unscripted plays that Houston coach Kelvin Sampson has laid out to overcome SU’s rejuvenated 2-3 zone and hot shooting.

Sampson spoke of the Cougars sticking to their identity of aggressive defense, hard-nosed rebounding, and efficient offense as the keys to fulfilling the mission of advancing to their first Elite Eight since 1984, which culminated in Hakeem Olajuwon’s famed “Phi Slama Jama” era.

Houston is the AAC regular-season and tournament champion and playing in its second straight Sweet 16 under Sampson. The former Oklahoma, Washington State, and Indiana coach has guided Houston since 2014 and gained his 665th career victory in the second round to pass UCLA legend John Wooden on the all-time list.

SU coach Boeheim said earlier this week that Sampson’s squad was a fixture in the top five of his votes for the USA Today Coaches Poll all season.

The Cougars enter on a nine-game win streak and have held eight opponents to 65 points or less during that stretch with their physical, tight-guarding, man-to-man style that will aim to frustrate SU’s shooters.

Houston is also as menacing on the boards as any team SU has faced, ranking seventh nationally in rebounds per game (44.1) to go with the second-highest offensive rebounding total in all of Division I.

Sampson said his team rarely practices against a zone defense during the regular season and is prepared for occasional bad looks on offense against SU’s unique implementation, but he believes they can be overcome by excelling in the areas Houston has emphasized all season.

“We’re going to have possessions where we might have a long 3, a contested 3 at the end of a shot clock,” Sampson said. “The thing I’ll tell you is that if we miss it, we’re going to try to go get it. ... They’re going to force you into some bad possessions, but that doesn’t mean you can’t win the game.”

Houston also ranks seventh nationally in the Ken Pomeroy adjusted offensive efficiency rankings, based on points per 100 possessions, and is tied for 13th in the country with 267 total 3-pointers at a rate of 35.7 percent. The Cougars fire from behind the 3-point arc on 41 percent of their shot attempts.

They are led offensively by 6-foot-5 junior guard and former Kansas transfer, Quentin Grimes, averaging 18.1 points in his second year at Houston while shooting 41 percent from behind the arc. His 91 total 3-pointers are the sixth most in Division I.

Grimes is the first Houston player since Olajuwon in 1984 to appear on three All-America teams. He is averaging 20 points, including a combined 9-for-17 mark on 3-pointers, in two NCAA Tournament games.