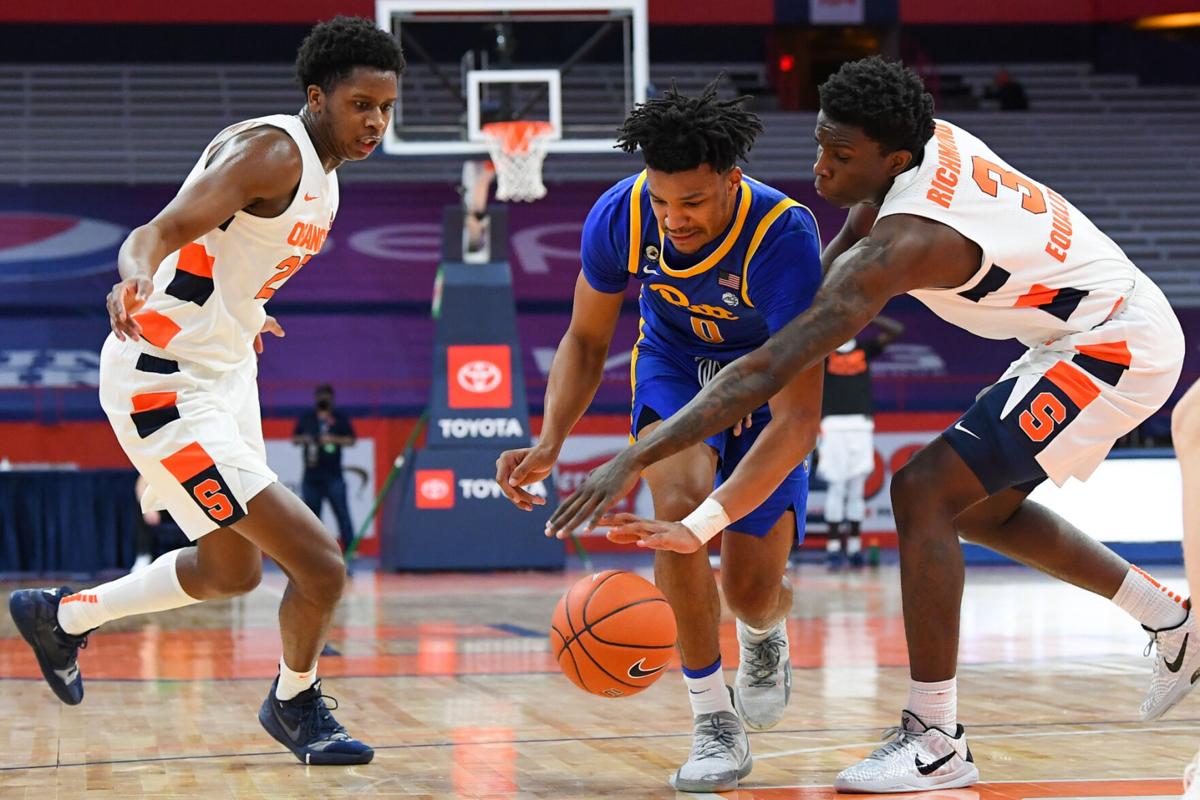 Syracuse forward Kadary Richmond, right, reaches for the ball controlled by Pittsburgh guard Ithiel Horton, middle, during the second half of Wednesday’s game at the Carrier Dome in Syracuse. Rich Barnes/USA TODAY Sports 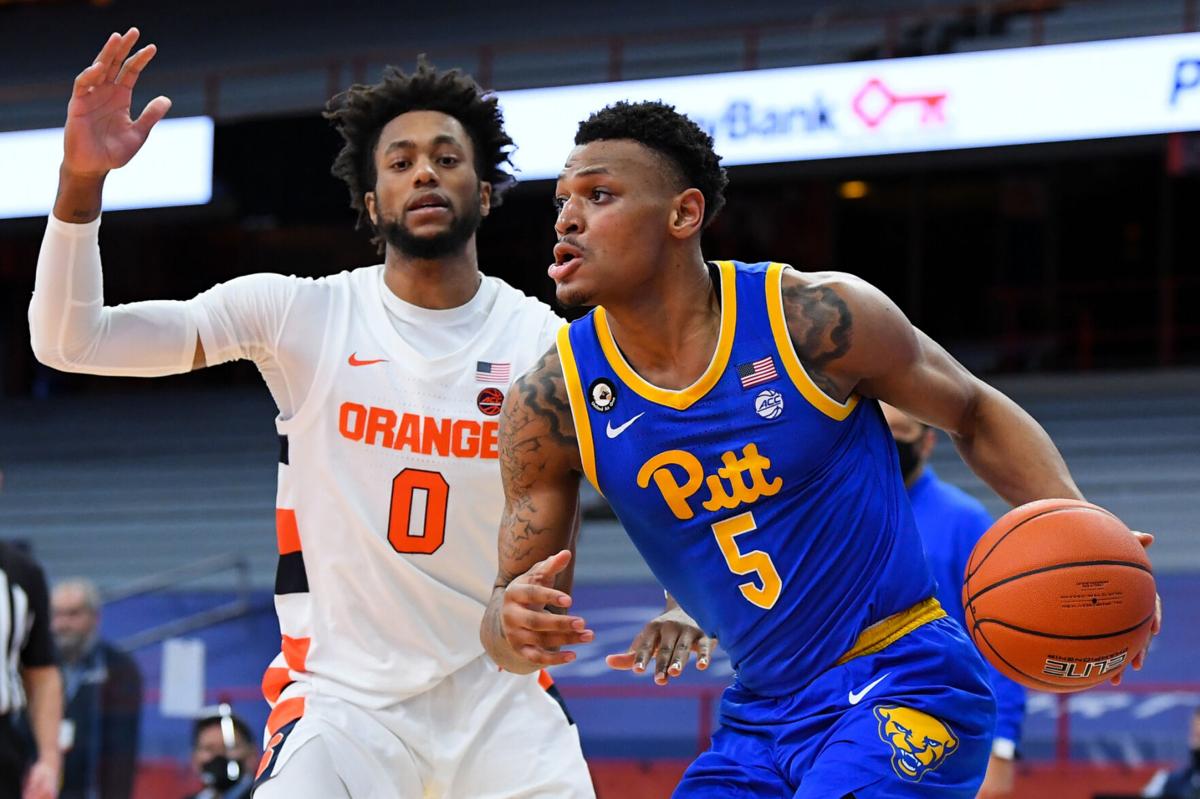 Pittsburgh guard Au’Diese Toney, right, drives to the basket against the defense of Syracuse forward Alan Griffin during the second half of Wednesday’s game at the Carrier Dome in Syracuse. Rich Barnes/USA TODAY Sports 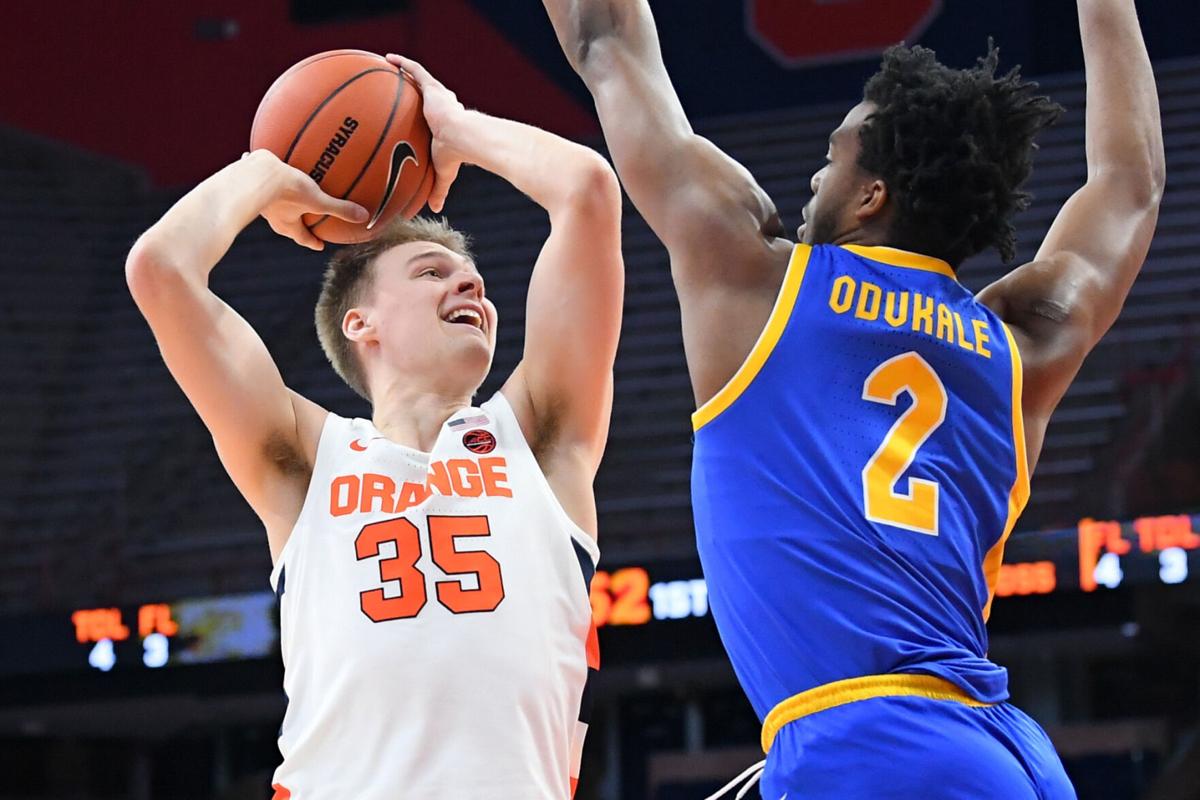 Syracuse forward Kadary Richmond, right, reaches for the ball controlled by Pittsburgh guard Ithiel Horton, middle, during the second half of Wednesday’s game at the Carrier Dome in Syracuse. Rich Barnes/USA TODAY Sports

Pittsburgh guard Au’Diese Toney, right, drives to the basket against the defense of Syracuse forward Alan Griffin during the second half of Wednesday’s game at the Carrier Dome in Syracuse. Rich Barnes/USA TODAY Sports

SYRACUSE — The surprise career performance of Robert Braswell was not enough to help the Syracuse University men’s basketball team fend off Pittsburgh on Wednesday in the Carrier Dome.

The Panthers took their first lead with a minute left and held on to complete the 63-60 comeback victory over the Orange in an Atlantic Coast Conference matchup marking the return for each program from extended layoffs due to COVID-19 protocol.

Pittsburgh (6-2 overall, 2-1 ACC) outscored Syracuse 11-3 over the final three minutes and produced a 19-5 scoring run across the final five minutes and 30 seconds to finish the rally after trailing by as many as 16 points in the second half.

Syracuse (6-2, 1-1) is next scheduled to host longtime rival Georgetown in a nonconference clash at 8 p.m. Saturday in the Dome. No fans will be permitted due to state coronavirus restrictions, as has been the case all season, but the game will be televised on ESPN2.

On Wednesday, Au’Diese Toney tipped in the go-ahead basket off a missed 3-point field goal to give Pittsburgh a 61-60 advantage with eight seconds left.

Following a timeout, SU center Marek Dolezaj threw the ensuing inbound pass from midcourt away as he was nearing a five-second count, and Pittsburgh’s Xavier Johnson recovered the loose ball and made a pair of free throws with 2.8 seconds remaining to seal the victory.

“There was a drawn-up play and I think a couple people got confused, I was kind of waiting to see if they go in the right spot and they didn’t, so I kind of panicked and just threw the ball somewhere,” Dolezaj said. “But it’s on me. The last play is on me.”

Braswell produced a career-high 12 points, highlighted by a 4-for-5 mark on 3-pointers, to help SU hold off Pitt’s initial comeback bid. Braswell made three consecutive shots from behind the arc to push SU’s edge to 44-33 after the Panthers opened the second half on a 13-3 run to trim into their deficit.

The redshirt sophomore forward played a career-best 20 minutes off the bench and had scored eight combined points in five appearances entering the game. Braswell was shut down for the season after seven games last year due to chronic leg pain, and after his 3-point flurry in the second half, was swarmed by his excited teammates that ran to meet him on the court for a timeout.

Syracuse ended a two-week pause on team activities with a full practice session Sunday and had not played since a 107-96 overtime victory over Buffalo on Dec. 19 in the Dome. Pittsburgh, meanwhile, had been out of action since a 64-54 loss to Louisville on Dec. 22. Both teams postponed multiple games in the interim.

The Orange looked refreshed opening with an 11-0 run and took less than 10 minutes to surpass the combined total of 3-pointers made in its prior two games before the layoff, in which it shot 5-for-37 from deep, but it was unable to maintain that energy.

Alan Griffin finished with team highs of 15 points, eight rebounds, and three blocks for the Orange as one of the few starters productive coming off the long break in action. His 3-pointer with 1:30 left gave SU a 60-57 advantage, and he blocked a shot with 30 seconds left to temporarily preserve a one-point edge.

SU sophomore Quincy Guerrier, who entered averaging team highs of 18 points and 10 rebounds, was limited to three points and five boards in 17 minutes due to foul trouble. SU’s starting backcourt of Buddy Boeheim and Joe Girard III shot a combined 6-for-23 from the field and 4-for-18 from behind the arc for eight points apiece.

Toney tallied a double-double with 12 points and 14 rebounds for Pittsburgh while Ithiel Horton scored 14 points, including four 3-pointers, and Johnson added 12.

Syracuse again played without senior center Bourama Sidibe, who has been sidelined since suffering a torn meniscus in his left knee during the season opener. Sidibe returned to practice this week but experienced soreness in the surgical-repaired knee and was held out of the game.

The Orange was also missing freshman center, Frank Anselem, due to COVID-19 protocol. According to a team official prior to tip-off, Anselem was released from quarantine but the team medical staff determined his return to action will be slower than his teammates.