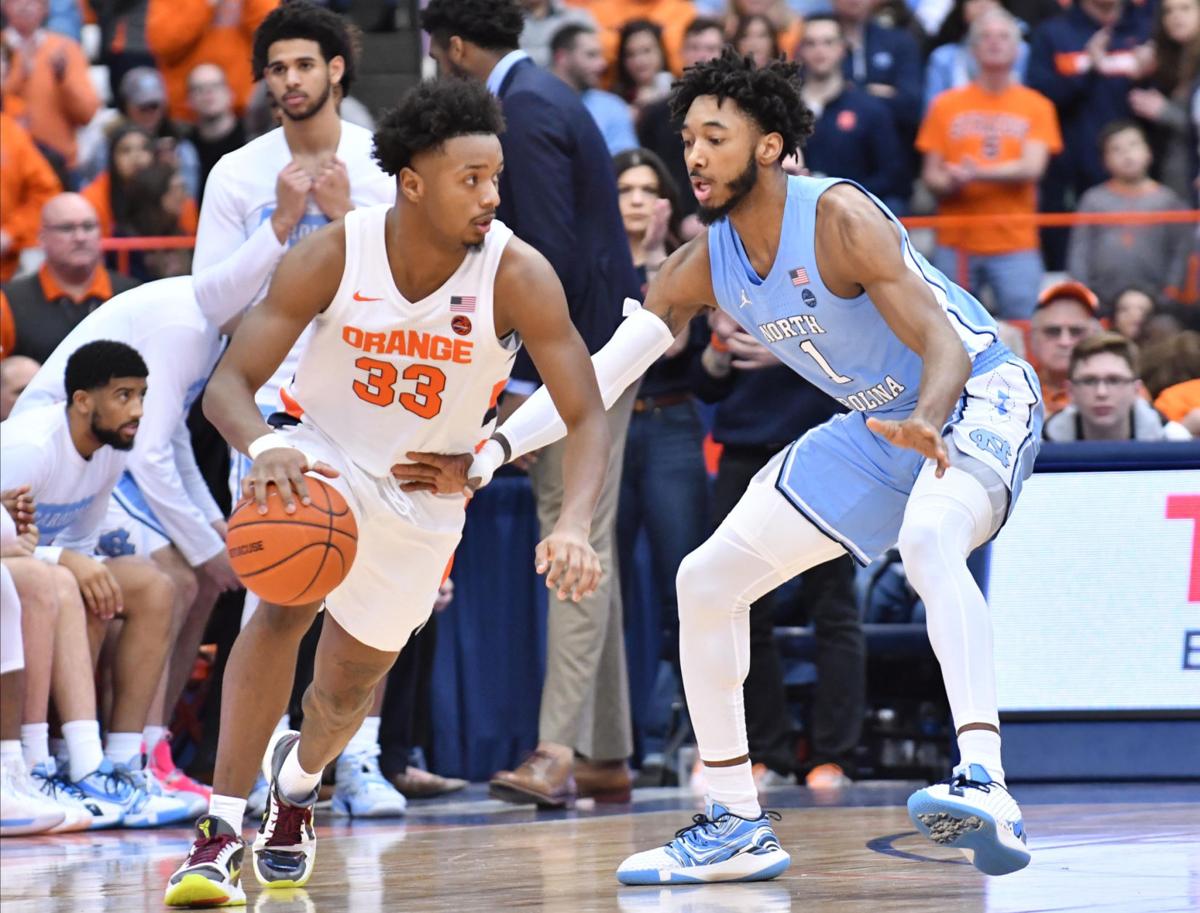 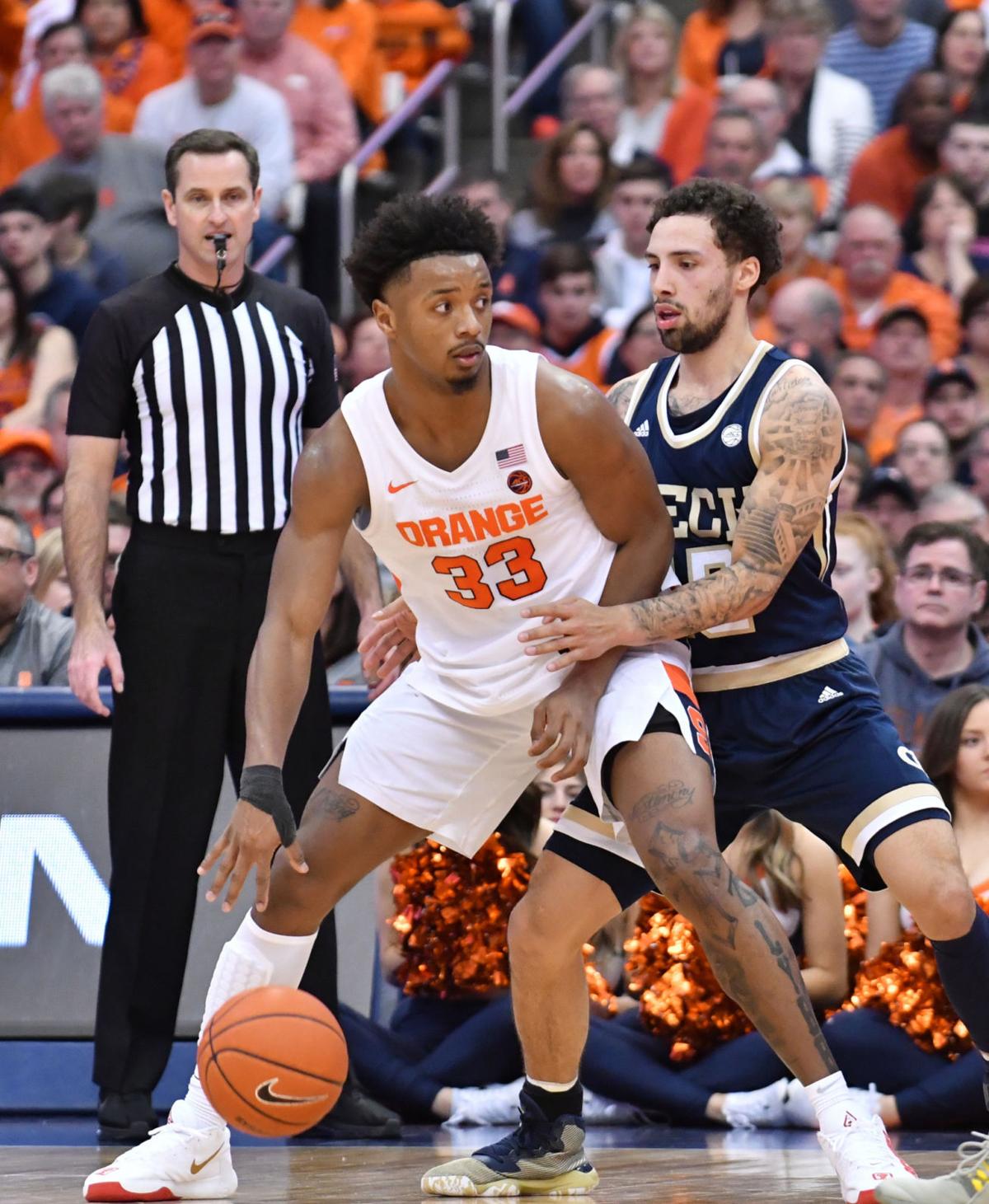 Syracuse University men’s basketball star Elijah Hughes enjoyed his 22nd birthday and was declared 100 percent by coach Jim Boeheim on Tuesday. Now comes the task of creating cause for celebration by trying to lead the Orange through the Atlantic Coast Conference Tournament.

Sixth-seeded Syracuse (17-14 overall) will begin its quest to reach the NCAA Tournament by facing No. 14 North Carolina (14-18) at approximately 9 p.m. today at the Greensboro Coliseum in Greensboro, N.C. The ACC Tournament second-round matchup will be televised on ESPN2.

The winner of tonight’s game will advance to a quarterfinal against third-seeded and 10th-ranked Louisville (24-7) at around 9 p.m. Thursday. The semifinals are scheduled for Friday night and the ACC title game will be held Saturday.

Hughes missed the second half of the Orange’s regular-season finale last Saturday — a 69-65 overtime loss to host Miami (Fla.) — due to an apparent head injury after colliding into the knee of teammate Bourama Sidibe.

The 6-foot-6 redshirt forward has since returned to practice and told multiple media outlets between workout sessions on his birthday Tuesday from Greensboro that he is ready for the postseason.

“It’s a new season,” Hughes said. “The energy in the locker room is great. The guys are excited and I’m excited, and we’re ready to make some noise.”

Hughes was also named to the All-ACC first team Monday after leading the conference in scoring at 18.8 points per game. His presence is imperative for the Orange to have any chance at securing an NCAA Tournament berth this week.

Syracuse enters the conference tourney at No. 64 in the NCAA NET Rankings and likely needs to win the ACC’s automatic bid if it is to avoid missing out on March Madness for the third time in six years — which would mark the worst such stretch during Boeheim’s 44-year tenure as head coach.

“I don’t think about that,” Boeheim said Tuesday of the need for an extended ACC appearance. “We’re trying to win one game, the next game. That’s all we’re trying to do.”

Hughes also averaged 4.9 rebounds, 3.5 assists and 1.1 steals per game, made 74 total 3-pointers, and provided consistently active defense while serving as the veteran voice for one of the youngest SU squads in recent memory.

He shot 80.7 percent on free throws and scored double figures in every game except the two in which he left early due to injury — SU losses to North Carolina State and the Hurricanes.

“He had a great year,” Boeheim said of Hughes during his media appearance on Tuesday. “He was probably the most consistent player in the league. ... Without him, obviously we would have really struggled. I’ve seen other guys, when they struggle, their team still wins. We needed him.”

The Tar Heels beat the Hokies, 78-56, in the opening round Tuesday to advance.

North Carolina topped SU in their only regular-season matchup, 92-79, Feb. 29 at the Carrier Dome for its ninth straight victory in the series. The Tar Heels are the only team to win nine in a row against the Orange and own a 13-4 edge in the all-time matchup.

SU surrendered a combined 51 points to the duo of Cole Anthony (26) and Garrison Brooks (25) and allowed UNC to make a season-high 11 shots from deep in the victory. Sophomore guard Buddy Boeheim made 9 of 17 shots to lead SU with 22 points in the setback.

If SU can advance through tonight, it would face the challenge of winning three additional games over the next three days — potentially against the top three seeds in the conference.

“At the end of the day you can only control what you can control, and that’s your energy, your enthusiasm, your effort in games and practice, and we’re going to try to control that,” Hughes told reporters Tuesday.

The ACC also announced Tuesday that the tournament would go on as scheduled, assuring fans that they can attend amid widespread reaction to the coronavirus outbreak from various sports organizations. The conference is one of many in the NCAA that plans to restrict media access in player locker rooms during its tournament.