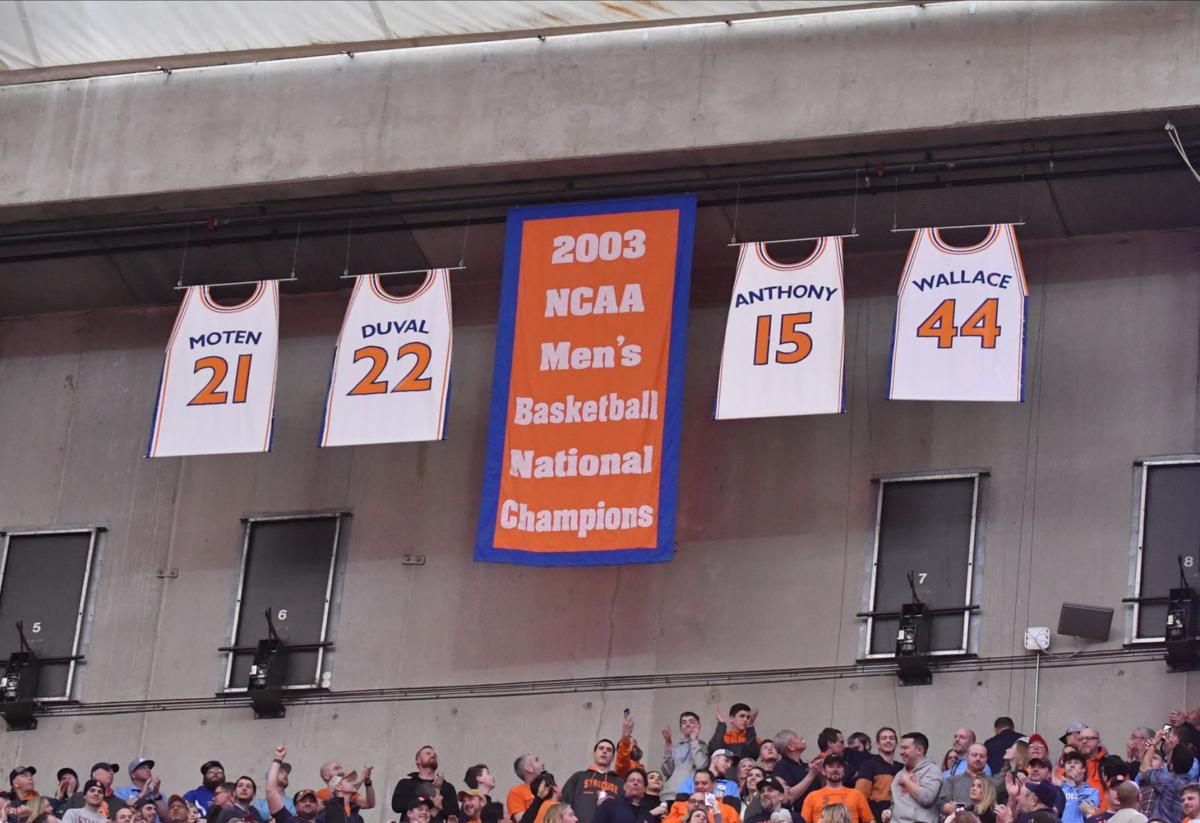 Former Syracuse University player John Wallace’s No. 44 is revealed and retired during a halftime ceremony Saturday in a game against North Carolina at the Carrier Dome. Mark Konezny/USA TODAY Sports 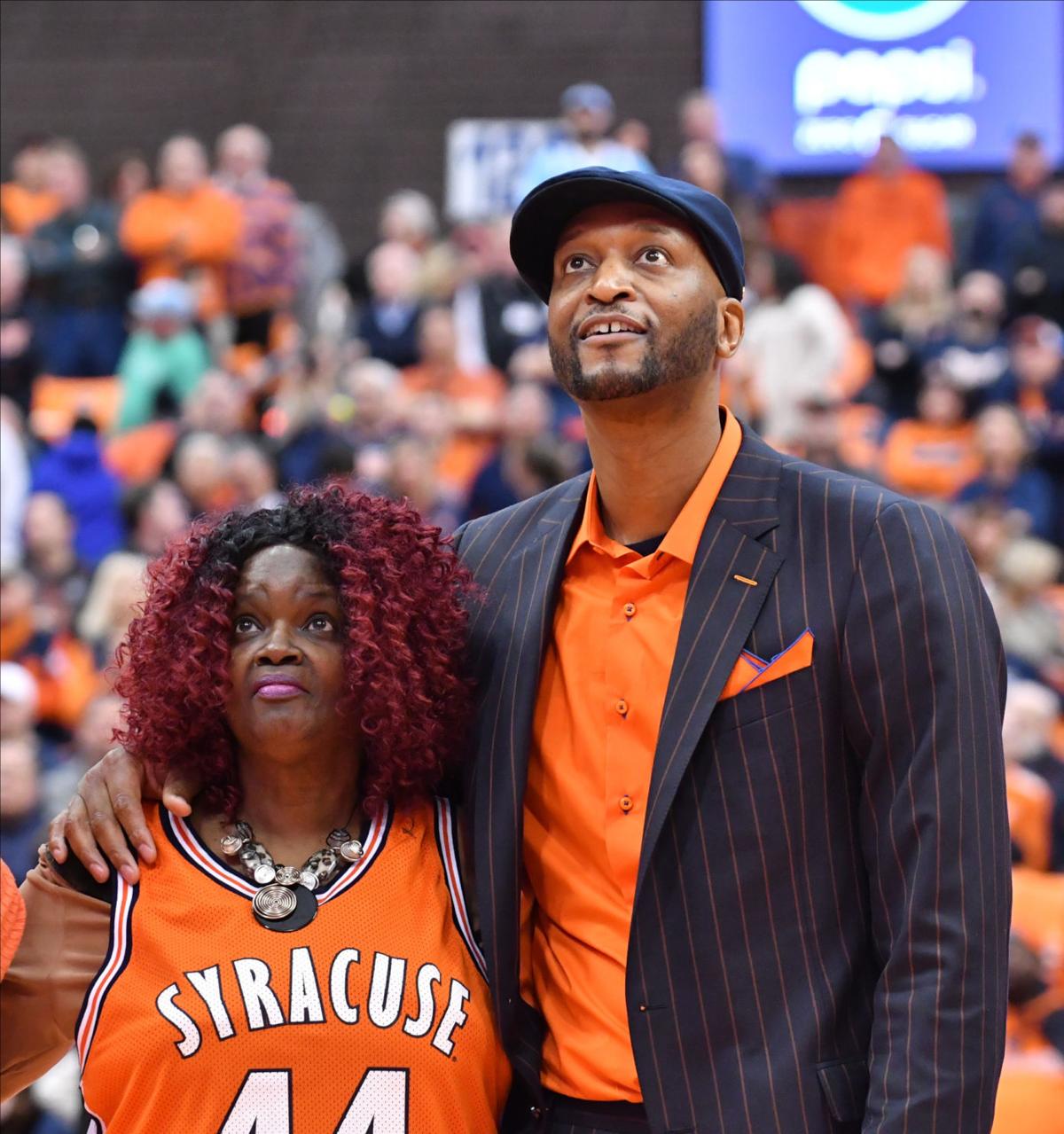 Former Syracuse University player John Wallace and his mother, Vanessa, watch highlights of his career during a halftime ceremony while the team retires his No. 44 Saturday in a game against North Carolina at the Carrier Dome. Mark Konezny/USA TODAY Sports

Former Syracuse University player John Wallace’s No. 44 is revealed and retired during a halftime ceremony Saturday in a game against North Carolina at the Carrier Dome. Mark Konezny/USA TODAY Sports

Former Syracuse University player John Wallace and his mother, Vanessa, watch highlights of his career during a halftime ceremony while the team retires his No. 44 Saturday in a game against North Carolina at the Carrier Dome. Mark Konezny/USA TODAY Sports

SYRACUSE — John Wallace idolized past legends of the Syracuse University men’s basketball team while growing up in nearby Rochester, and celebrated his rightful place among those Orange greats in the Carrier Dome rafters Saturday.

Syracuse retired Wallace’s No. 44 jersey during a ceremony at halftime of its 92-79 setback to North Carolina before 29,312 fans in the Dome — the NCAA’s second largest on-campus crowd this season.

The iconic power forward played from 1992-96 and finished third in program history for career points (2,119) and rebounds (1,065). He helped guide SU to the 1996 national championship game in his consensus All-American senior season, and became the 15th player in program history to have his jersey retired.

“It’s beyond an honor to have your number retired, especially at such a historic university like Syracuse University for all the great players that have been here,” Wallace said. “There are a lot of great players that didn’t get their number retired, so to be that 15th person and for it to be in coach Boeheim’s 44th season, so many things make this a special occasion.”

Wallace wore a custom suit consisting of a bright orange shirt and orange shoes, along with a navy blue pants and jacket combo that featured orange pinstripes. He was accompanied by several family members at center-court and spoke to the crowd before a blue curtain was dropped from the upper reaches of the Dome to reveal a Wallace No. 44 jersey next to the No. 15 of Carmelo Anthony.

“I wanted to look like I bleed orange, and I think I pulled it off,” Wallace said. “To see (the retired jersey) be unveiled and see it kind of moving with the air up there, it was beyond. I was beyond elated about it, and just trying to take it all in. The crowd was great and it was a great turnout today. I’ve got all the people I love here and I couldn’t ask for more.”

Wallace thanked SU coach Jim Boeheim and a host of former coaches, teammates, and past influences that helped shape his basketball career. He gave special praise and became emotional when he thanking his mom, Vanessa, who stood next to him as he spoke, for often working multiple jobs as a single parent.

“It was just me and her for a while,” Wallace said. “There were a lot of tough times and my mom was just working, never complaining, never accepting welfare, just working and working, so I got a little emotional during that time. … I just wanted to thank the people who helped me get there along that journey. You don’t get to Syracuse by yourself.”

Wallace also spoke of his affection for the program long before he was on their recruiting radar.

In Boeheim’s 2014 autobiography “Bleeding Orange,” he shared a conversation with Wallace during his freshman year of 1992-93, while SU was on NCAA probation, in which the star forward said that he would have chosen SU even if it had faced a two- or three-year postseason ban.

“I grew up a Syracuse fan,” Wallace said. “I remember Pearl (Washington) making that (half-court) shot. I remember watching those Georgetown rivalry games and Billy Owens hitting the free throws with no time on the clock. I was in my high school gym playing pickup and I stopped the game so we could watch those free throws. I’ve always bled orange and the day I first got a letter from Syracuse is a day I’ll never forget, just liked the first day I walked onto the campus.”

Wallace also finished his career ranked ninth in program history with 209 blocked shots and is one of three Orange players to record 2,000 career points and 1,000 career rebounds, joining Derrick Coleman and Hakim Warrick.

“He was so important for our program, when he came and what he did, was incredible,” Boeheim said of Wallace afterward.

“He had a great first three years and then he had a better senior year, took his team to the final game, and he’s a phenomenal player for us,” he added. “He’s been Syracuse, consistently, day in and day out. It was great to see him back.”

Wallace went on to be selected with the No. 18 overall pick of the 1996 NBA draft by the New York Knicks and played seven seasons with the Knicks, Toronto Raptors, Phoenix Suns, Detroit Pistons, and Miami Heat before retiring in 2004.

Syracuse honored several other former players with an on-court alumni recognition during a media timeout in the first half.

Watertown High School graduate Matt Gorman, who played for the Orange from 2002-07, was one of more than a dozen players to participate. Other Orange favorites like all-time leading scorer Lawrence Moten, Etan Thomas and Boeheim’s former teammate, Dave Bing, were also introduced to the crowd.