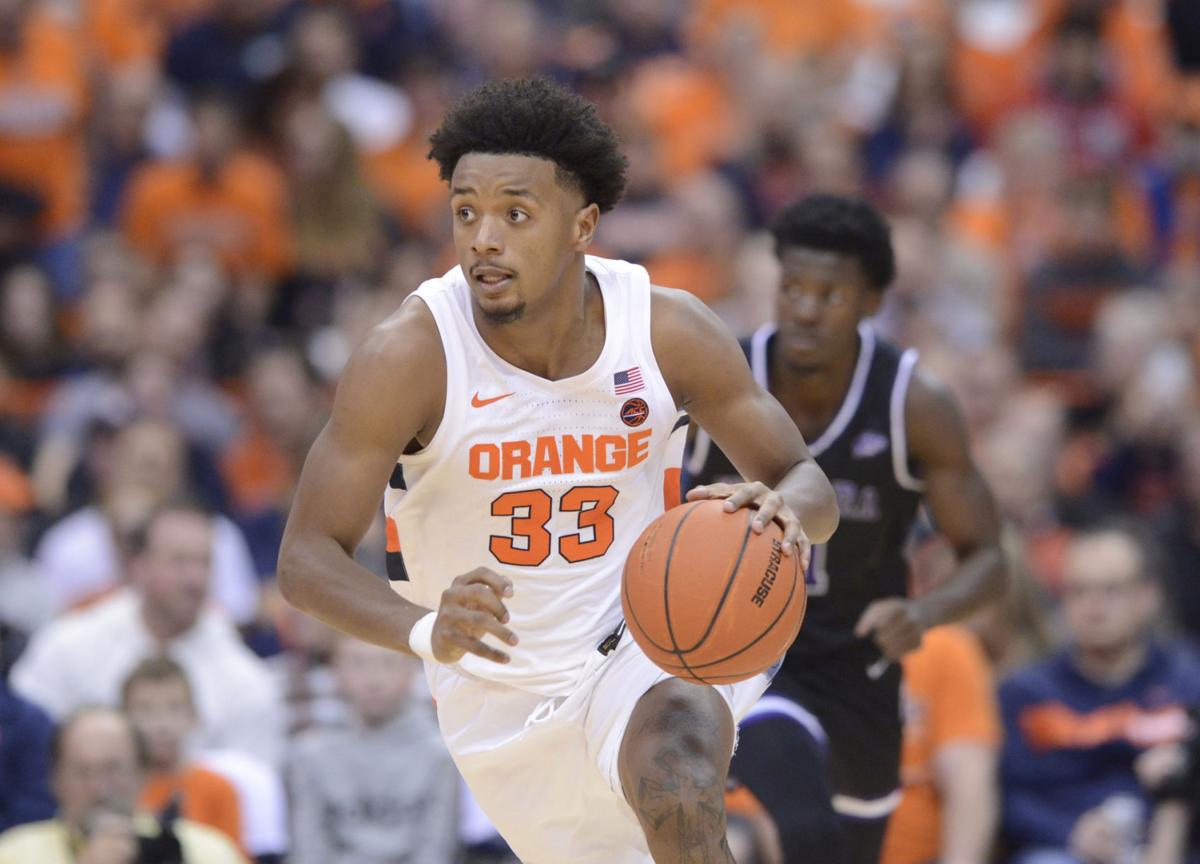 Syracuse forward Elijah Hughes brings the ball up court against Niagara during a Dec. 28 game at the Carrier Dome in Syracuse. Mark Konezny/USA TODAY Sports 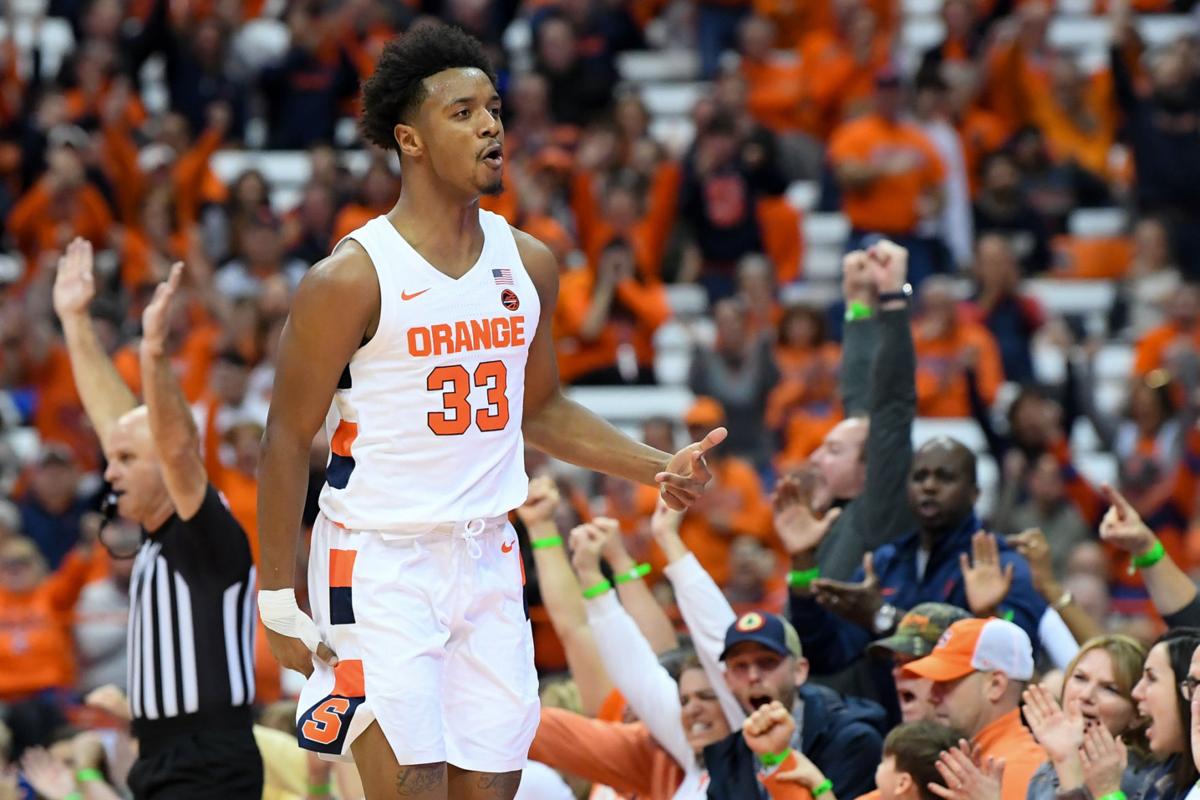 Syracuse forward Elijah Hughes (33) reacts to a made 3-point basket against Notre Dame on Jan. 4 at the Carrier Dome in Syracuse. Rich Barnes/USA TODAY Sports 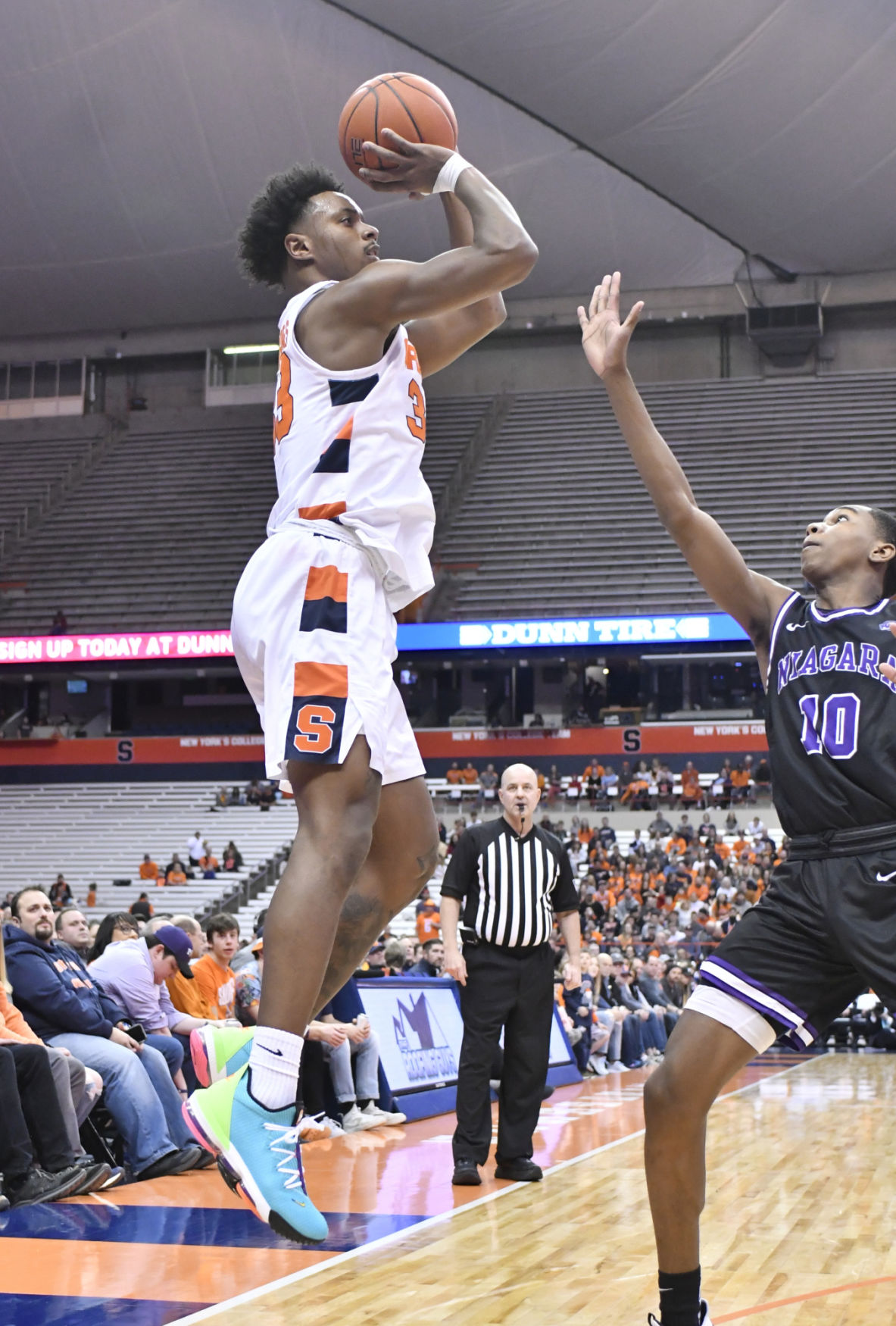 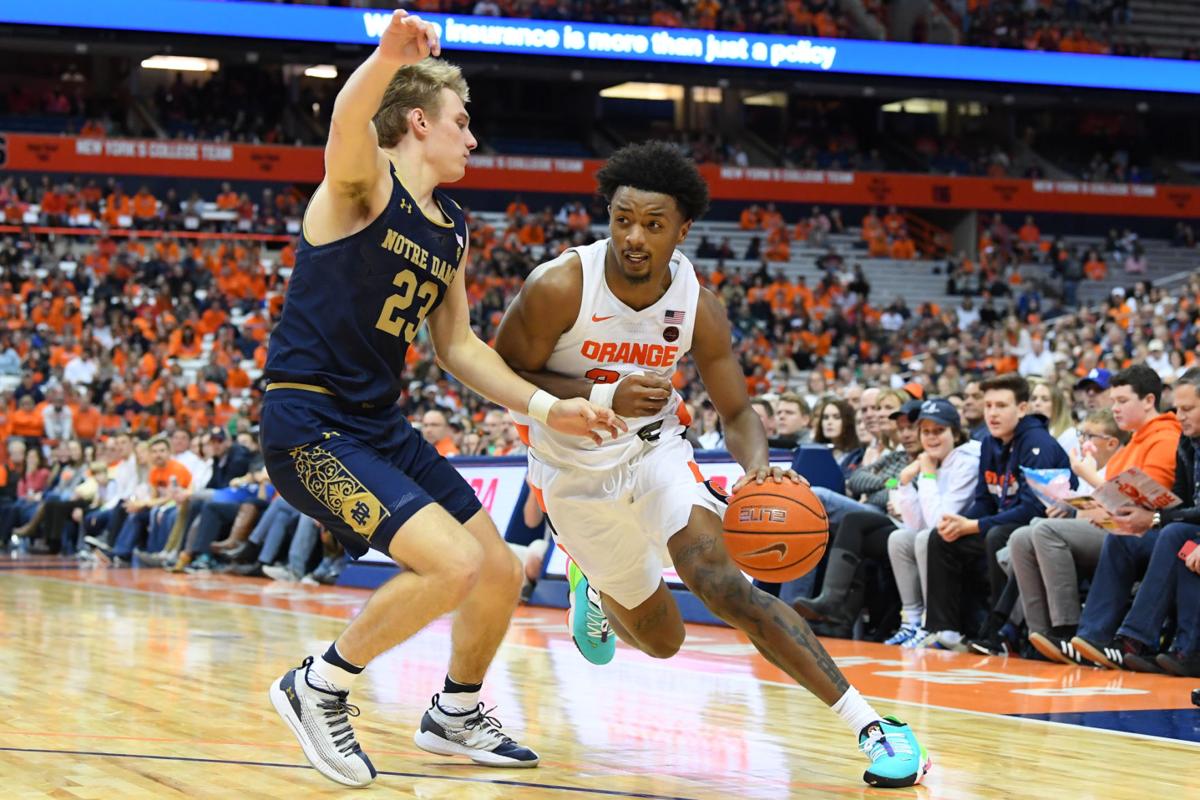 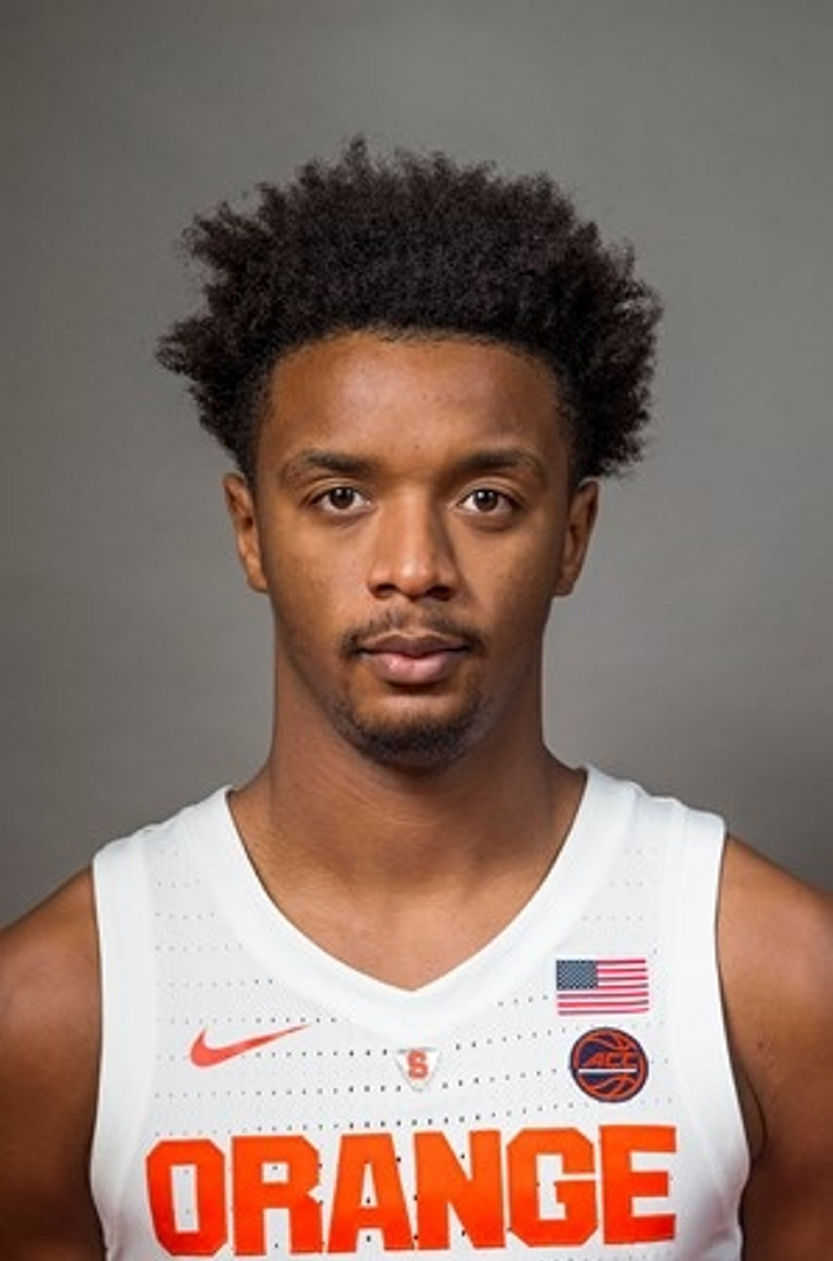 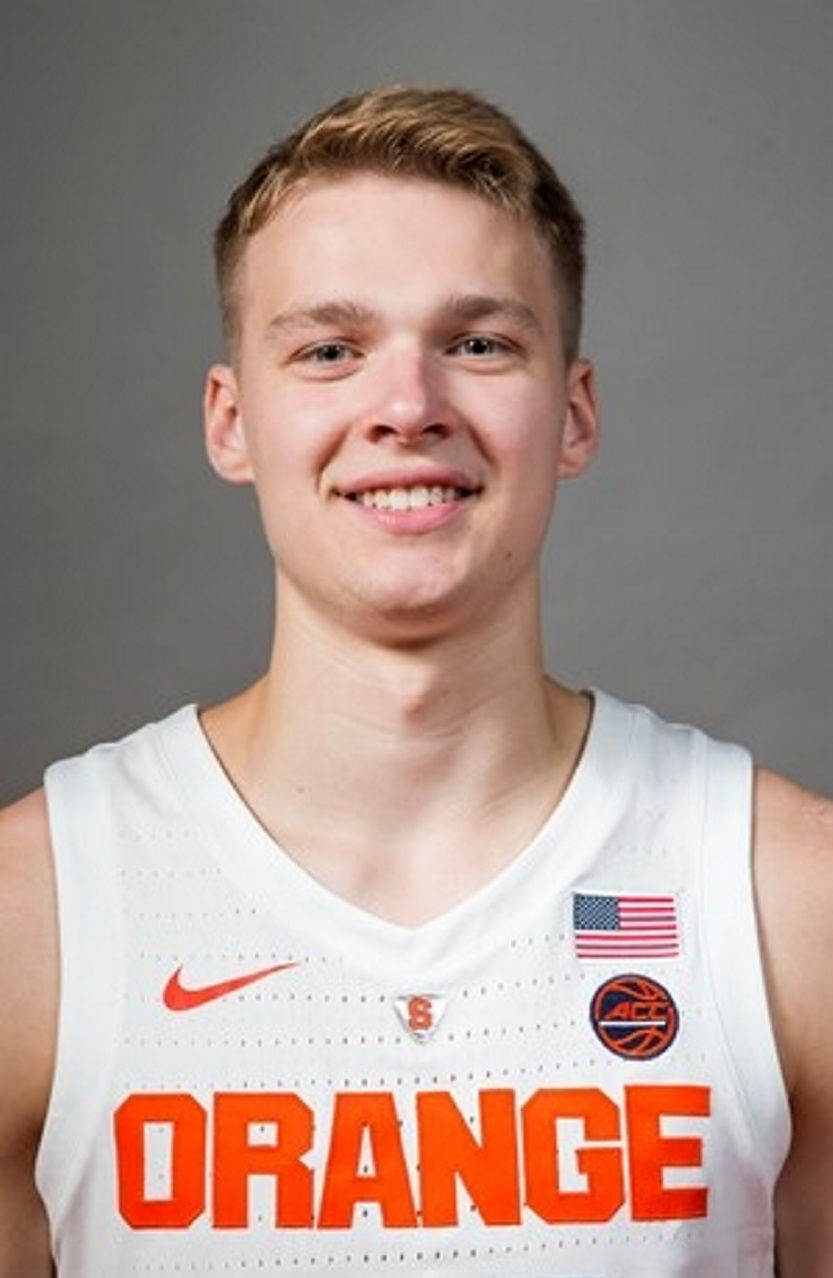 Syracuse forward Elijah Hughes brings the ball up court against Niagara during a Dec. 28 game at the Carrier Dome in Syracuse. Mark Konezny/USA TODAY Sports

Syracuse forward Elijah Hughes (33) reacts to a made 3-point basket against Notre Dame on Jan. 4 at the Carrier Dome in Syracuse. Rich Barnes/USA TODAY Sports

When asked to sum up the mood as the room began to clear following that 88-87 ACC loss to Notre Dame last Saturday, Hughes stated blankly: “I’m just ready to go home.”

It’s hard to blame the redshirt-junior star for seeking rest after continuously providing the Orange with all-around stat production that is unrivaled nationally, while also leading one of the ACC’s least experienced squads through early-season struggles.

“He’s just so underrated and I think he’s one of the best players in the country,” SU sophomore guard Buddy Boeheim said of Hughes. “He can do everything. He scores at all three levels, he makes plays, he’s an unselfish and great leader, and I can only say good things about him. He is what makes us go.”

The Cavaliers, who suffered a 60-53 setback to Boston College on Tuesday, claimed a 48-34 victory over the Orange in the season opener for both teams on Nov. 6.

Hughes will enter the challenging road matchup with season averages of 19.6 points, 4.8 rebounds and 4.5 assists while shooting 44.8 percent from the field and 40.5 percent on 3-point field goals, logging nearly 38 minutes per game.

His pace has slowed slightly but Hughes is still within reach to join former University of Washington standout Markelle Fultz as the only players of the last 28 seasons to average 20 points, five rebounds, five assists, and shoot at least 40 percent from deep. Fultz accomplished the feat in his one season with the Huskies before being selected No. 1 overall by the Philadelphia 76ers in the 2017 NBA Draft.

Hughes leads the Orange in scoring and assists, ranks second in total 3-point field goals (42) and blocks (14), and has scored in double figures while making at least one shot from behind the arc in every game this season.

The Beacon native and former East Carolina transfer entered this week’s games ranked second in the ACC in scoring average and total 3-point field goals, sixth among qualified players in the conference in 3-point percentage, seventh in assists, and tied for 15th in blocks.

Hughes has increased his scoring average by six points per game and he has already tallied more assists (68) than he recorded all of last season (50).

Hughes tallied 19 points to go with nine rebounds and nine assists in SU’s final nonconference regular-season game, a 71-57 victory over Niagara on Dec. 28 at the Carrier Dome, narrowly missing the first triple-double by an SU player since current assistant coach Adrian Griffin pulled it off in 2001.

Following a nonconference victory over North Florida last month, 44th-year SU head coach Jim Boeheim pointed out that Hughes was, at the time, on pace to be the third player of the last two decades to average at least 20 points, four rebounds, four assists, one steal, and one block. He would join Fultz and 13-time NBA All-Star Dwayne Wade, who registered the rare stat output during a standout 2002-03 campaign at Marquette University.

Hughes entered this week with averages of 0.9 blocks and 0.9 steals per game while establishing himself as an active force in SU’s 2-3 zone and transition defense.

“Elijah is doing everything for us, he’s doing things that nobody has done in a long time,” Jim Boeheim said after that victory. “I think he’s a little bit under the radar.”

Boeheim averaged 5.3 made shots from deep over a stretch of games between Dec. 7 and Jan. 4, establishing and later matching a career high of seven during that period.

He made 32 of 68 (.470 percent) during the six-game surge and leads the ACC with 55 total 3-pointers, which ranks sixth nationally. Boeheim also ranks ninth in the nation for most 3-point attempts (135), which is tops among ACC players, and ranks 10th in the conference for scoring average at 15.5 points per game.

SU coach Jim Boeheim utilized just six players in Tuesday’s 67-63 ACC loss to Virginia Tech, and while the Hall of Fame coach has traditionally preferred a tight rotation throughout his 44-year tenure, he seemingly has little choice with recent injuries taking their toll on the Orange’s depth.

Three potential contributors off the bench — freshmen guard Brycen Goodine and center Jesse Edwards, along with junior point guard Howard Washington — have each battled various ailments throughout the past few weeks to limit an already weakened bench that is without sophomore guard Jalen Carey and sophomore forward Robert Braswell for the remainder of the year.

Goodine underwent surgery for a broken nose suffered in practice last week and was unavailable for this past Saturday’s game while awaiting the arrival of a custom protective face mask. Edwards, meanwhile, suffered a sprained ankle at practice in late December and missed SU’s final nonconference game but was expected to resume practicing last week.

Goodine and Edwards have yet to appear in a game since their respective conditions were reported, but each freshman saw sporadic playing time prior to the afflictions and have both been on the bench in uniform while taking part in pregame warm-ups.

Washington, who missed last season while recovering from a stroke and also suffered a torn ACL to prematurely end his 2017-18 campaign, sat out SU’s final two nonconference games last month due to swelling in his knee. Washington has been cleared but has made just one appearance — a six-minute stint Saturday against the Fighting Irish — since Dec. 18.