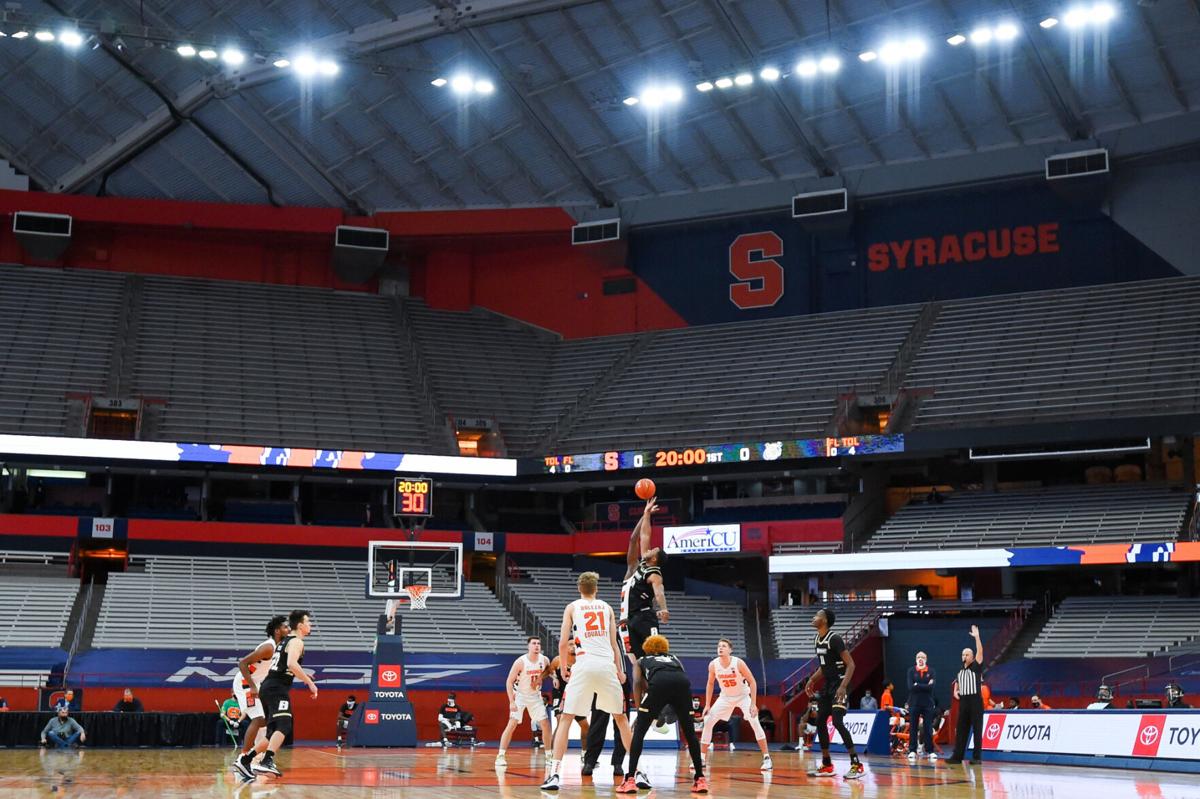 A general view of the game’s opening tip between Bryant and Syracuse University is shown Nov. 27 with spectators barred at the Carrier Dome. Rich Barnes/USA TODAY Sports 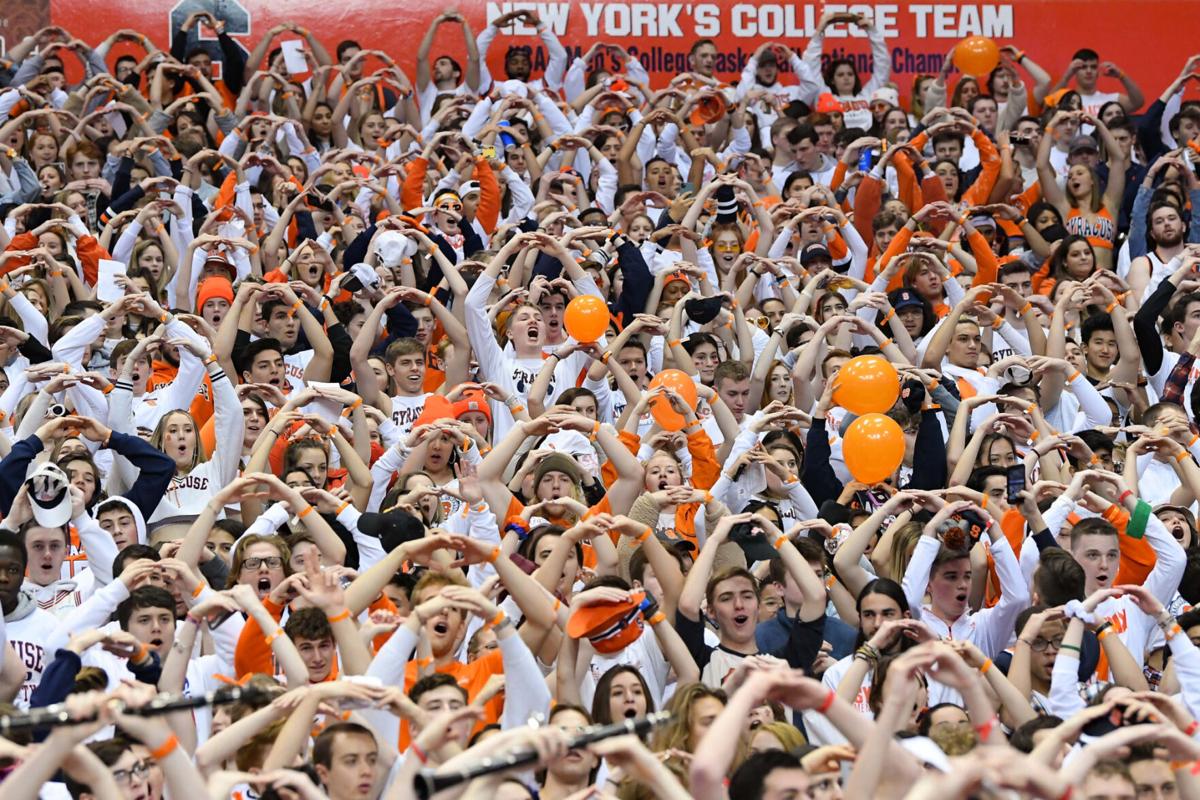 Syracuse fans are shown prior to the game against Duke on Feb. 1, 2020, at the Carrier Dome. Rich Barnes/USA TODAY Sports

A general view of the game’s opening tip between Bryant and Syracuse University is shown Nov. 27 with spectators barred at the Carrier Dome. Rich Barnes/USA TODAY Sports

Syracuse fans are shown prior to the game against Duke on Feb. 1, 2020, at the Carrier Dome. Rich Barnes/USA TODAY Sports

The Syracuse University men’s and women’s basketball teams are one step closer to getting a possible boost from fans in the Carrier Dome just in time for the postseason push.

Gov. Andrew Cuomo announced Wednesday that sports and entertainment venues in stadiums and arenas with a capacity to host 10,000 or more people can reopen with limited spectators beginning Feb. 23.

Syracuse released a statement later that night indicating that the university was still working with health officials to determine when it will begin allowing spectators into the Dome, which can hold up to 35,642 fans for basketball games — the most in NCAA Division I. The Orange has yet to open any games to the public since the onset of the COVID-19 pandemic last March.

“Syracuse University continues to seek counsel and support from New York State as we work toward safely reopening the stadium, first to a small group of students, and eventually to more fans from the broader community, public health permitting,” the statement read on behalf of SU.

“At the heart of our reopening plan is safeguarding the health, well-being and safety of the campus and surrounding communities. We appreciate the guidance we have received from New York State Department of Health and the Onondaga County Health Department and look forward to eventually welcoming spectators into the stadium for athletic competitions.”

The SU men’s basketball team has one home game scheduled after Feb. 23 — hosting North Carolina on March 1 — but has home outings against Louisville, Florida State and Clemson that were previously postponed and could still be made up by the end of the regular season.

The Orange (11-6 overall, 5-5 Atlantic Coast Conference) is next scheduled to host Boston College at 2 p.m. Saturday.

The SU women’s squad (11-4, 8-4) is slated to play its final two regular-season games at home — Feb. 25 against Boston College and Feb. 28 against North Carolina State — where limited fans or students could potentially be in attendance.

The Orange men’s squad is 9-1 on its home court this year but players have noted the glaring absence of fans at various points throughout the bizarre campaign. The Dome is traditionally among the most frenzied atmospheres in the sport with four men’s basketball attendance titles in the past eight years.

Syracuse guard Buddy Boeheim — who has witnessed countless games in the Dome prior to his playing career as the son of 45th-year Orange coach Jim Boeheim — spoke of the void of the energy void after a 74-69 win over longtime rival Georgetown last month in the Dome.

“It’s tough to have a rivalry game with no fans, you don’t really feel it,” Buddy Boeheim said afterward. “You can feel the intensity like any other game, I guess, but it just kind of felt like another game for the most part.”

According to Cuomo’s guidance, the capacity limit for the Dome and other approved venues would be capped at 10 percent and require Department of Health approval for each event.

Face coverings, social distancing, and temperature checks are mandated, and all staff and spectators must receive a negative COVID-19 PCR test within 72 hours of the event. Fans will be seated in socially-distanced spaces and each venue must collect contact information from all in attendance for contact-tracing efforts.

Each stadium must meet enhanced air filtration, ventilation, and purification standards, while retail, food services, and athletic activities abide by all other state-issued guidance.

The plan released is largely based off the state’s pilot program allowing fans into two Buffalo Bills’ NFL playoff games in January.

Syracuse is one of five ACC institutions that has yet to allow spectators for basketball games this year, joining North Carolina, Duke, Miami (Fla.), and Boston College.

The Orange men’s team could use the potential spark from fans as it aims to enter the NCAA Tournament discussion. SU entered Thursday at No. 49 in the NCAA NET rankings with six games left, though there are four potential makeup games that could be added to the schedule.

The SU women’s team entered Thursday at No. 36 in the NET rankings and received votes in both national Top 25 polls this past week.

The NCAA Tournament selection shows are set for March 14 for the men’s brackets while the women’s field will be unveiled the next day.

The organization’s mission listed at cnycares.net is to “rapidly raise money through a local grass roots effort, with the support of large businesses and community leaders and residents, and distribute support funding to small businesses as soon as possible to help sustain them until normalcy and stabilization occur.”

Devendorf recently raised more than $60,000 to donate to a handful of small businesses in January. He will serve as president of the new community organization.

Former SU star forward, John Wallace, is also a board member for CNY Cares, Inc. Wallace had his No. 44 jersey retired by the program last year and finished third in team history for points (2,119) and rebounds (1,065) while playing from 1992-96.

Syracuse women’s point guard Tiana Mangakahia was one of 39 players named to the Wade Trophy midseason watch list this week, which is presented annually to the top player in women’s NCAA Division I basketball.

The fifth-year point guard leads the nation in assists with an average of 7.9 per game entering Thursday to go with 10.6 points and 3.6 rebounds per game.

Mangakahia is also up for the Lieberman Award to recognize the nation’s top point guard, while freshman teammate Kamilla Cardoso is a candidate for the Lisa Leslie Award to honor the top center in the country. Fan voting for the positional awards is open at www.hoophallawards.com/women/vote.php.