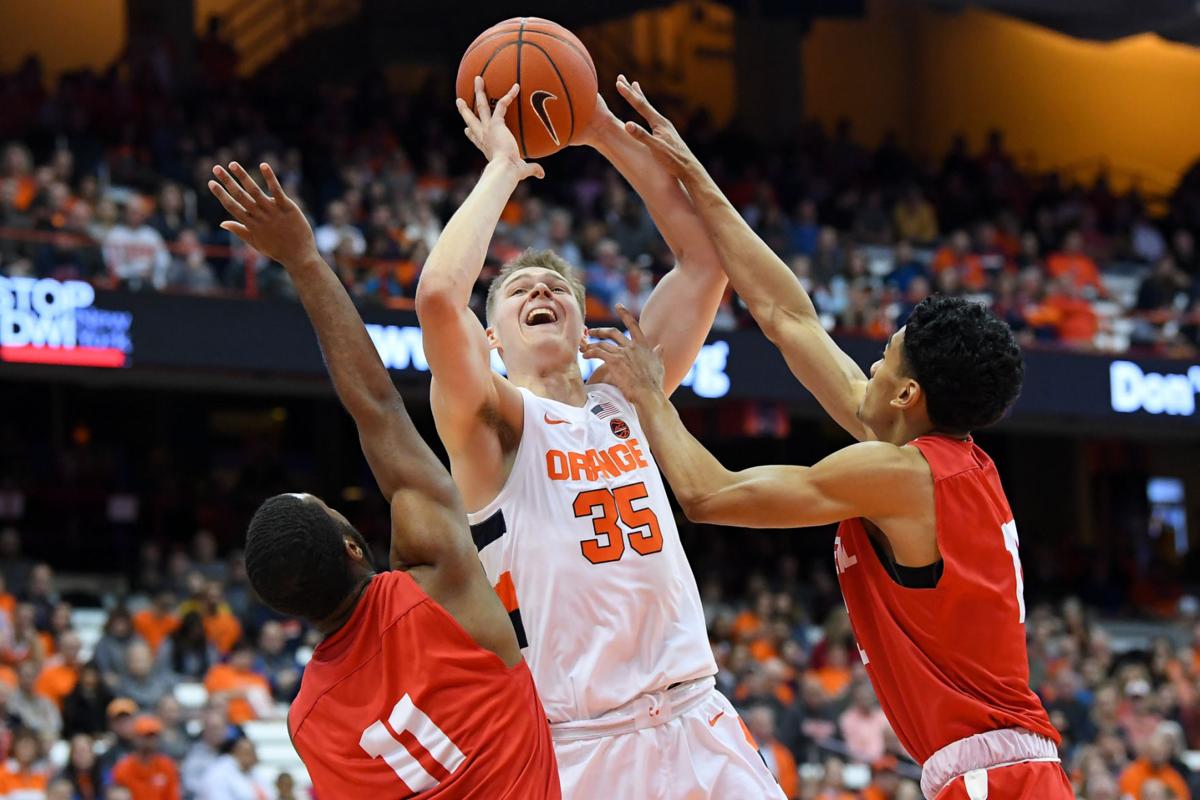 Syracuse guard Buddy Boeheim, middle, shoots the ball against Cornell guard Terrance McBride, left, and forward Thurston McCarty during the second half of a Nov. 20 game at the Carrier Dome in Syracuse. Rich Barnes/USA TODAY Sports 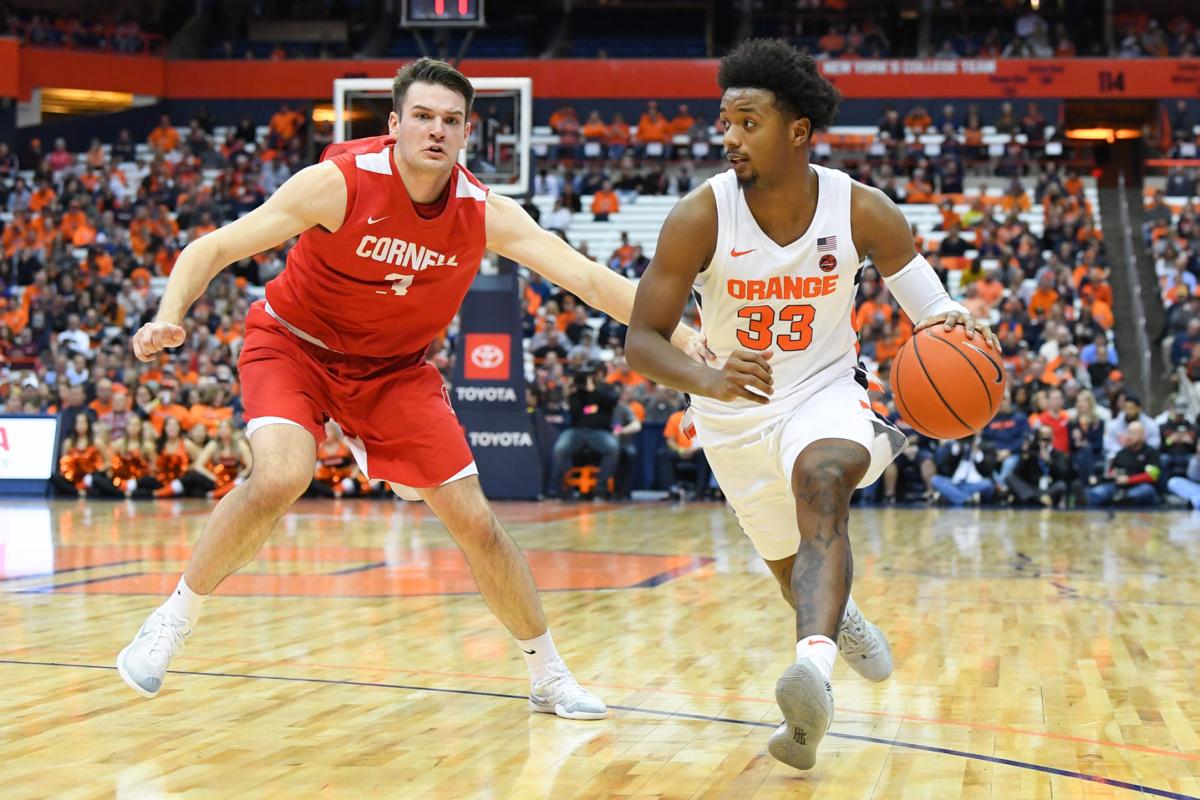 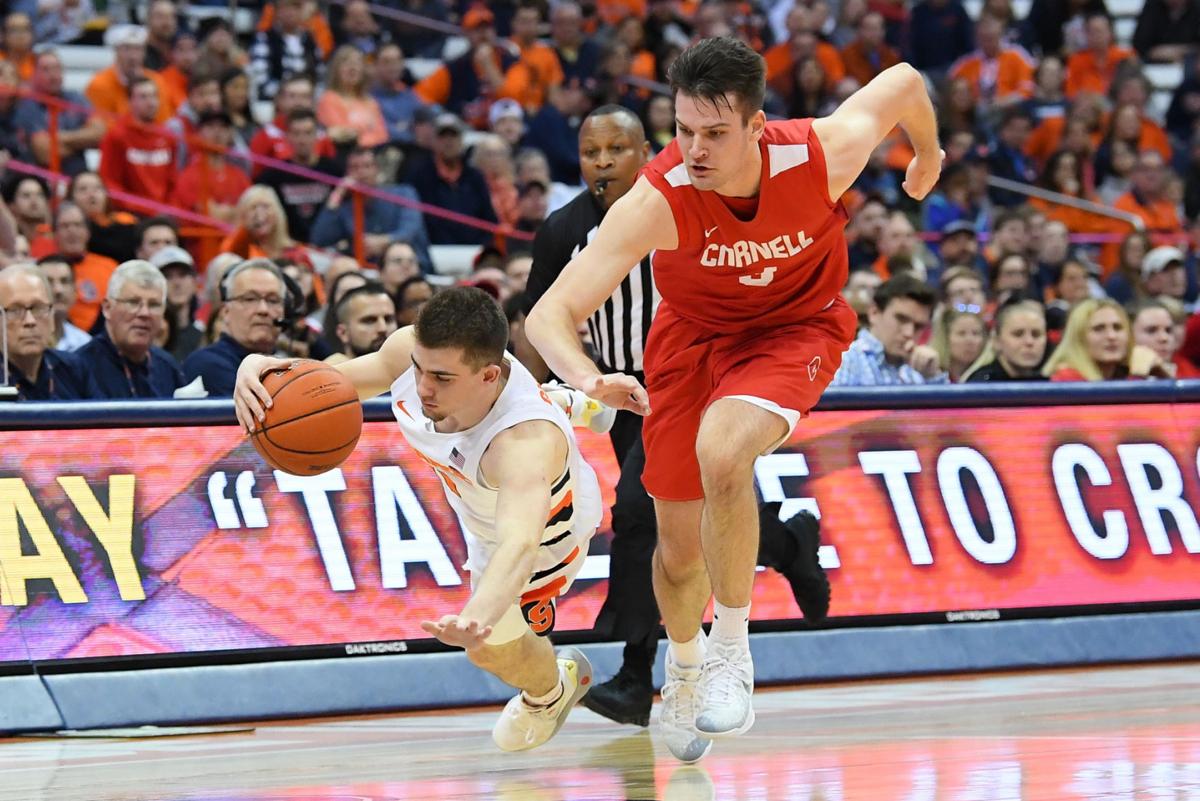 Syracuse guard Buddy Boeheim, middle, shoots the ball against Cornell guard Terrance McBride, left, and forward Thurston McCarty during the second half of a Nov. 20 game at the Carrier Dome in Syracuse. Rich Barnes/USA TODAY Sports

SYRACUSE — Jimmy Boeheim did everything in his power to ignite a monumental upset for Cornell in the family face-off Wednesday night, but the Syracuse University men’s basketball team held on to ensure bragging rights remained with SU head coach Jim Boeheim and his younger son and starting SU guard, Buddy Boeheim.

Elijah Hughes scored 22 points and Buddy Boeheim matched a career high of four 3-point field goals to contribute 16 points, leading the Orange to a 72-53 victory over the Big Red in front of a crowd of 21,123 fans at the Carrier Dome.

Big Red junior Jimmy Boeheim scored a game-high and season-best 25 points against his father’s team, carrying Cornell (1-4 overall) to a competitive showing in the 125th all-time matchup of in-state foes.

Syracuse (3-1) claimed its 40th straight victory in the series and will return to the Dome to host Bucknell as part of the NIT Season TipOff at noon Saturday.

“I don’t really like coaching against my son but we have to do it once a year and we have to get through it,” SU coach Jim Boeheim said. “He played really well and I’m sure his mother is happy.”

The Boeheim brothers each played 35 minutes while their father, Jim, coached from the SU bench in the midst of his 44th season. Their mom, Juli Boeheim, watched courtside with other family members while sporting a T-shirt with the phrase “Battle of the Boeheims,” printed on the front and logos representing each team along with the jersey number of each brother shown prominently.

Jimmy Boeheim engineered two solo runs during his season-high performance to keep Cornell in the game. Early in the second half, he scored on an up-and- under around SU center Bourama Sidibe, and hit a 3-pointer on the next possession to trim SU’s edge to 35-33 with 16 minutes left.

He cleaned up a loss ball and scored inside to give the Big Red a 26-25 advantage with a minute left in the first half to cap off a sequence in which he scored six straight unanswered points. Jimmy Boeheim also made a pair of free throws to pull Cornell within three points, 44-41, with nine minutes left in the game, but SU started to regain control and pull away soon after.

Jimmy Boeheim entered as the Big Red’s leading scorer, averaging 15.3 points per game. The junior forward added two rebounds and two assists and connected on 9 of 11 free throws, and he aggressively attacked the rim to draw seven fouls, the most for either team.

Jimmy Boeheim scored nine points last year against SU in the Dome and tallied 11 points against his father’s team as a freshman. He received some applause and a small “Jimmy Boeheim,” chant from the SU student section when he was taken out of the game in the closing minutes.

“I thought we did a good job on their shooters for the most part but Jimmy got in the lane, and when he gets in there, that’s where he’s really good and he got to the foul line,” Jim Boeheim said of his older son. “Jimmy played really well tonight. He’s gotten better every year he’s been there.”

Buddy Boeheim wasn’t to be outdone despite shooting just 4 of 13 from behind the arc. Late in the first half, he pump-faked at the top of the key and got his brother in the air, then took two dribbles and hit a pull-up jumper to give SU a 26-25 advantage.

With about four minutes left in the game, Jimmy Boeheim made a 3-pointer to trim SU’s lead to 60-49 before Buddy Boeheim connected from deep on the ensuing possession to extend the Orange advantage.

“I grew up looking up to him and he gave me that competitive edge, and never let me beat him in anything we did, it didn’t matter the competition,” Buddy Boeheim said of his brother, Jimmy. “I always wanted to be better than him and get to the level he was at and that helped me get here.”

SU freshman forward Quincy Guerrier scored eight of his 10 points in the second half to go with five rebounds. Freshman point guard Joe Girard III was held to nine points on 2-for-8 shooting but continued to show strong command of the offense in his second career start.

SU announced prior to tip-off that sophomore Jalen Carey, who lost his starting point guard spot to Girard III after two games, is out indefinitely with a wrist injury that will require surgery. Jim Boeheim stated afterward that the injury should take 8-10 weeks for recovery, and Carey is likely to pursue a medical redshirt.

SU players wore pregame warmup shirts featuring the hashtag “Not again SU,” printed on the front at their request to show solidarity with students protesting the administration’s response to a series of racist incidents reported on campus over the past two weeks.