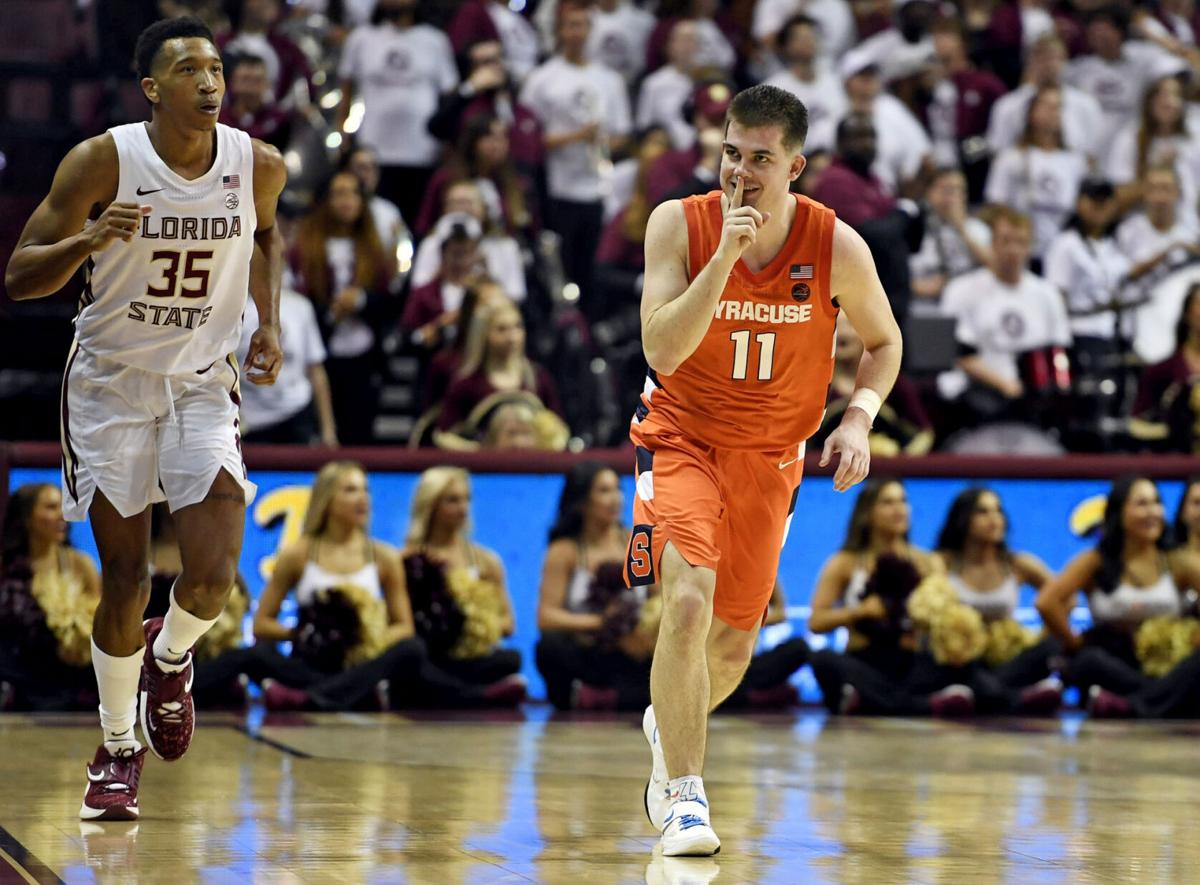 Syracuse’s Joseph Girard III gestures to the crowd during the second half against Florida State on Saturday. Melina Myers/USA TODAY Sports 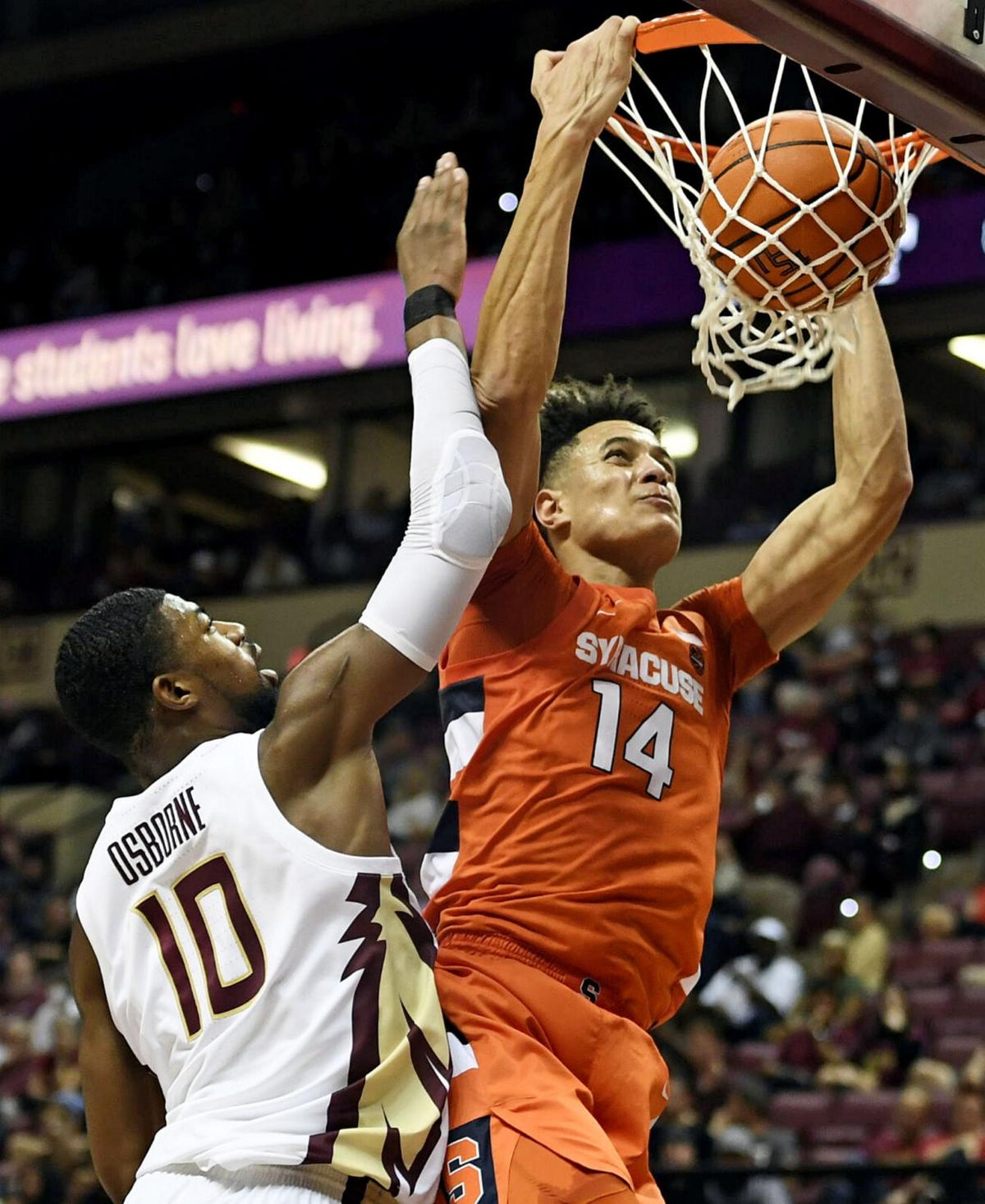 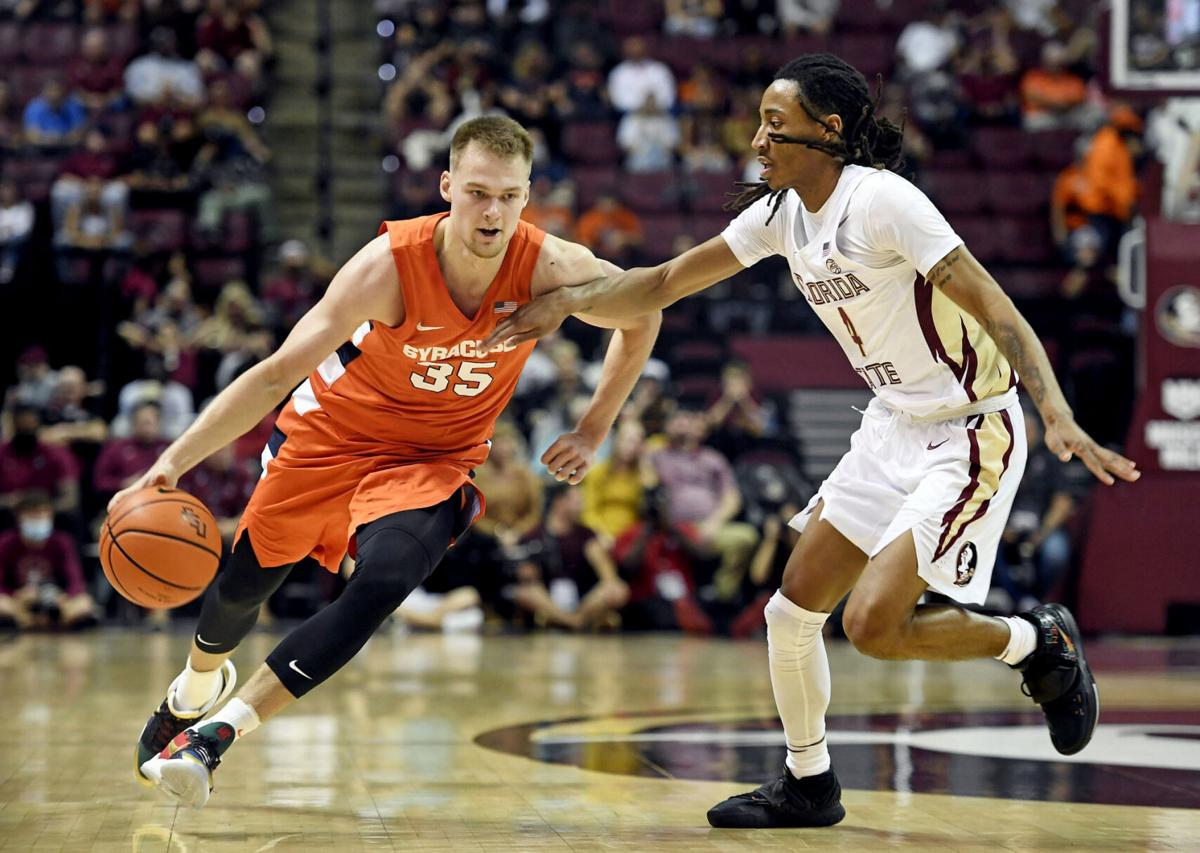 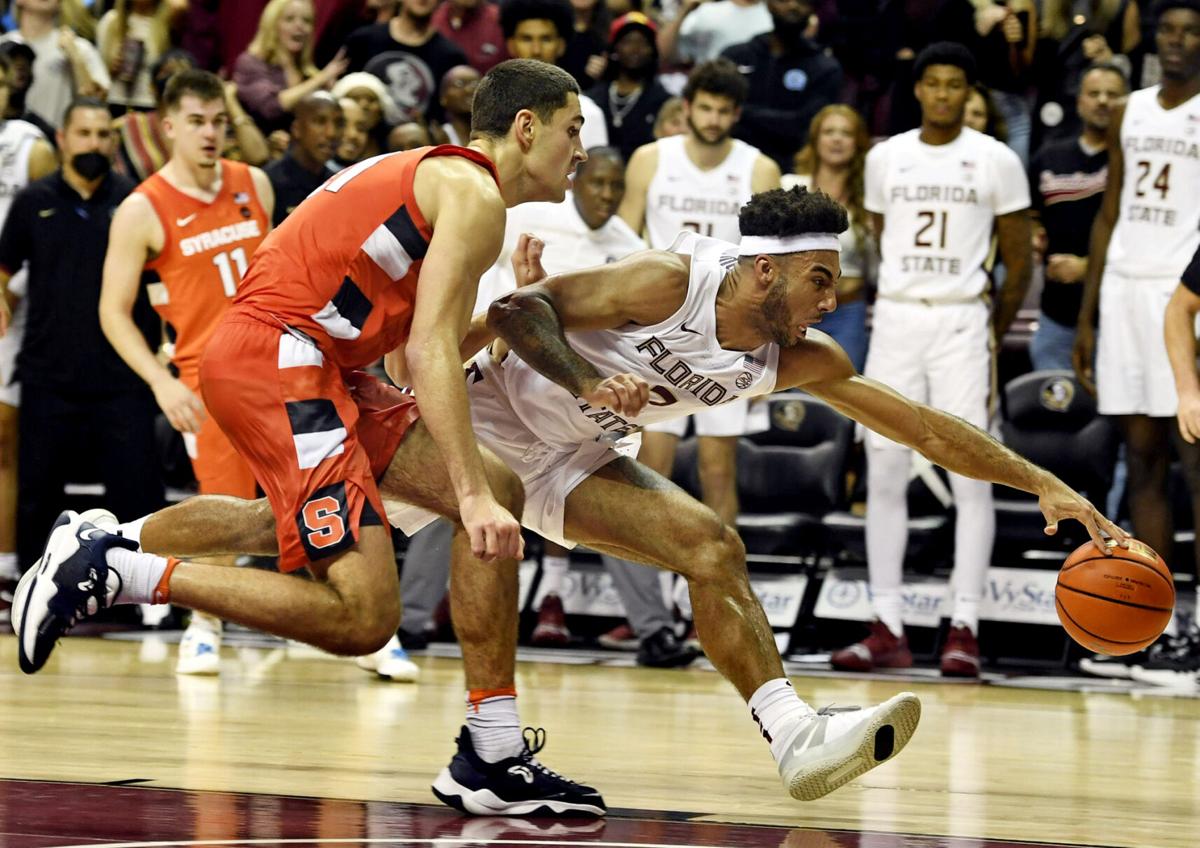 Florida State’s Anthony Polite reaches for a loose ball during the second half against Syracuse on Saturday. Melina Myers/USA TODAY Sports 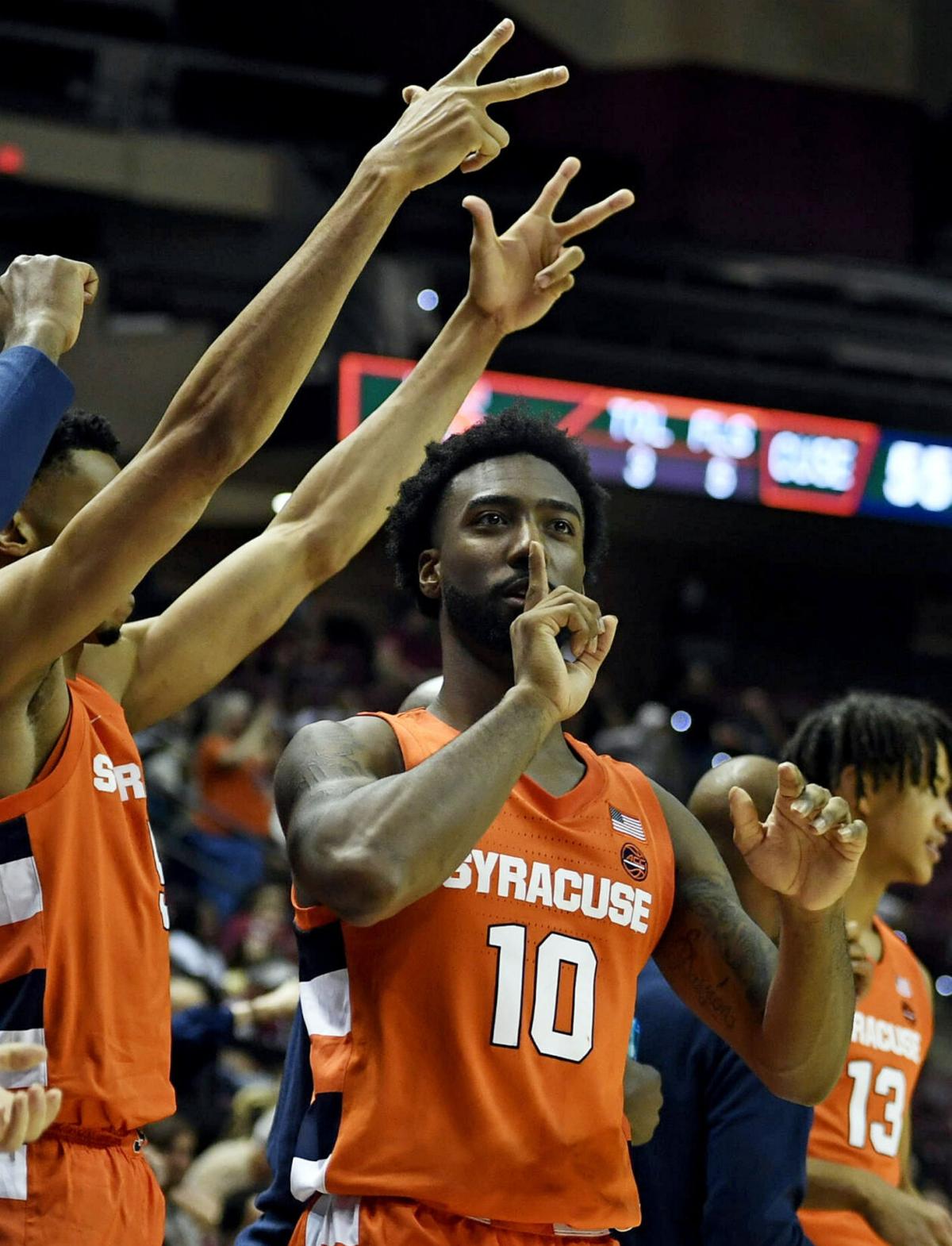 Syracuse’s Joseph Girard III gestures to the crowd during the second half against Florida State on Saturday. Melina Myers/USA TODAY Sports

Florida State’s Anthony Polite reaches for a loose ball during the second half against Syracuse on Saturday. Melina Myers/USA TODAY Sports

The result ended Florida State’s 25-game home winning streak in conference play, one shy of the league record set by Duke from 1997 to 2000.

Girard III was 4-for-8 on 3-point shots for the Orange, which claimed its second straight win over a team that received votes in the latest Top 25 Coaches Poll.

Syracuse will next face sixth-ranked Villanova at 9:30 Tuesday night in the Jimmy V Classic at Madison Square Garden.

“We’re resilient,” Girard III said. “We were down eight at halftime and could have crumbled away, they’re really good at home with the longest active ACC home streak, so to come back in an environment like this and play the way we did, I’m really proud of the guys and looking forward to the next one.”

Jimmy Boeheim added 13 and Jesse Edwards chipped in 11 as Syracuse survived Buddy Boeheim being held to six points, his first game below double figures this year.

Caleb Mills scored 16 points for the Seminoles, who shot a dreadful 28.1 percent in the second half as the game got away from them.

Despite the awful shooting Florida State had a chance to win in the final seconds.

Malik Osborne’s 3-pointer brought FSU to within 61-60 with 42 seconds left. The Seminoles got the ball back with the chance to gain the lead, but with 11 seconds left Rayquan Evans was called for an offensive foul and Swider canned two free throws for Syracuse on the other end.

The game ended when Osborne missed a 3-pointer at the buzzer.

Florida State held a 35-24 lead early in the second half but soon after, Syracuse ripped off 11 successive points for a 40-37 advantage on Buddy Boeheim’s layup with 13:02 left.

Syracuse extended that edge to 58-49 on Swider’s 3-pointer with 4:14 left before holding on down the stretch.

“Our defense really won the game for us, it has not been good, but our defense kept getting stops when we had to have them,” SU coach Jim Boeheim said. “I just thought our defense was the difference. When you’re down eight on the road like that and come back, that’s hard to do.”

Edwards added a career-high 12 rebounds for his first double-double to go with two blocks but fouled out for the second straight game and fourth time this year.

Syracuse held Florida State to a 4-for-30 mark on 3-point shooting and just a 34.9 percent showing from the floor overall.

Jim Boeheim tweaked his signature 2-3 zone for portions of the second straight game, dropping Buddy Boeheim from the top of the zone to the foul line for more of a 1-3-1 setup.

“We use it, we can come out of it in different circumstances, it depends where the ball goes and what they’re doing,” Jim Boeheim said. “We can come back out of it. It’s been a little more effective, but it’s not just that, our forwards are moving better, (Edwards) is moving better to the corner, we trapped them really well a few times.”