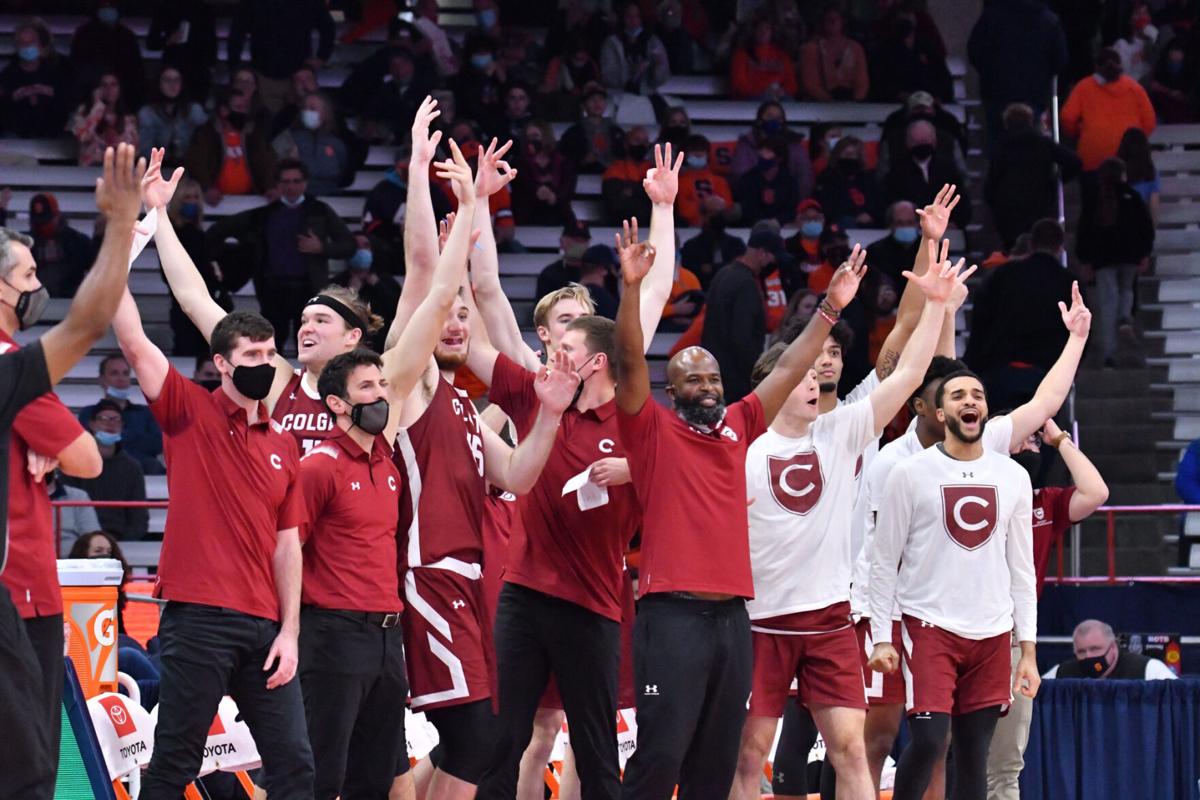 The Colgate bench reacts to a 3-point basket in the second half in the team’s win over Syracuse on Saturday. Mark Konezny/USA TODAY Sports 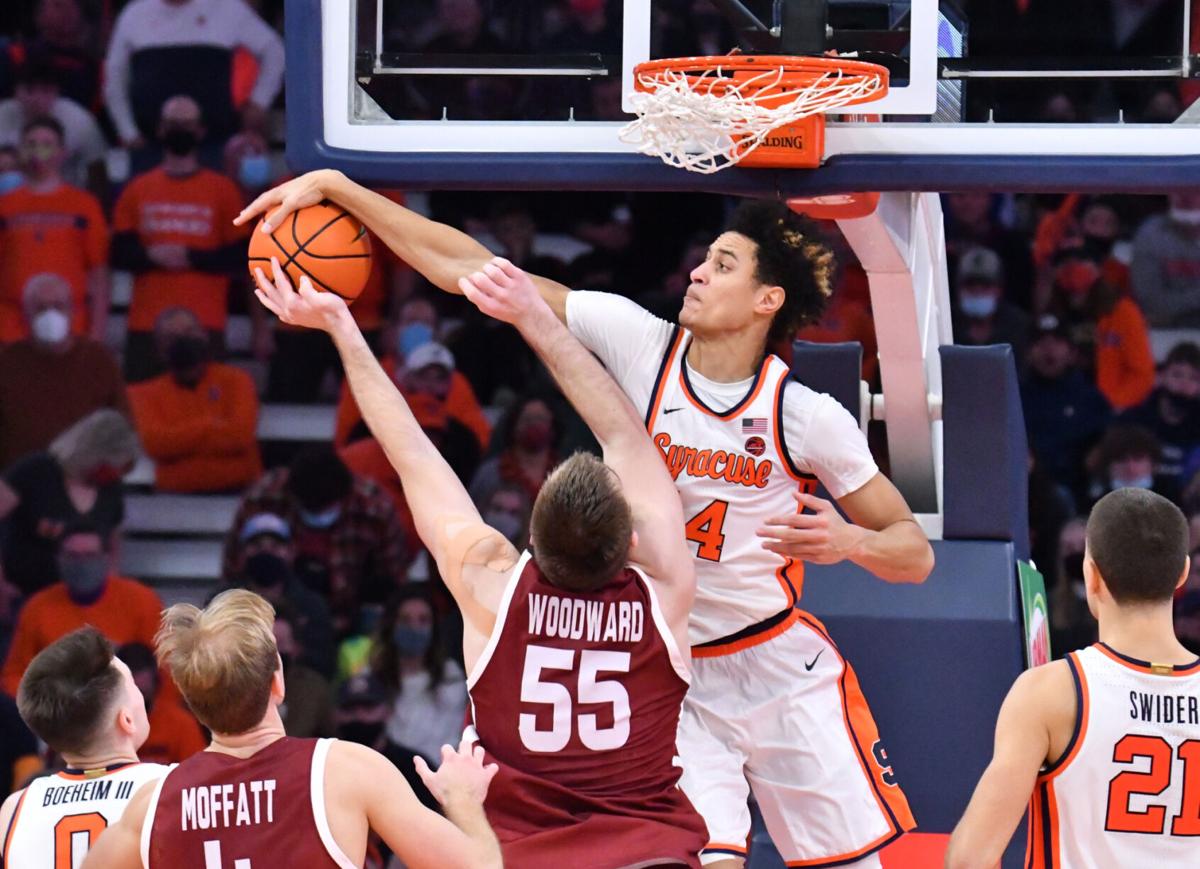 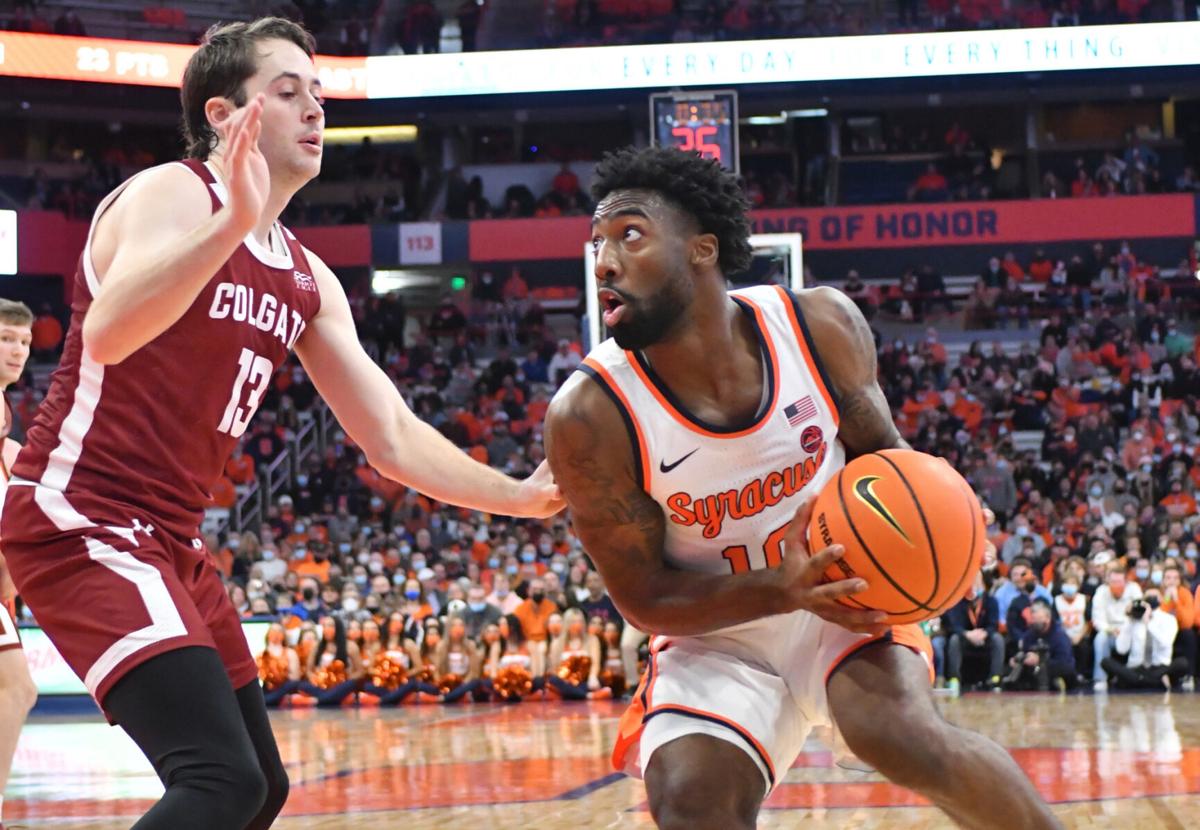 Syracuse’s Symir Torrence controls the ball against Colgate’s Jack Ferguson in the second half Saturday at the Carrier Dome. Mark Konezny/USA TODAY Sports 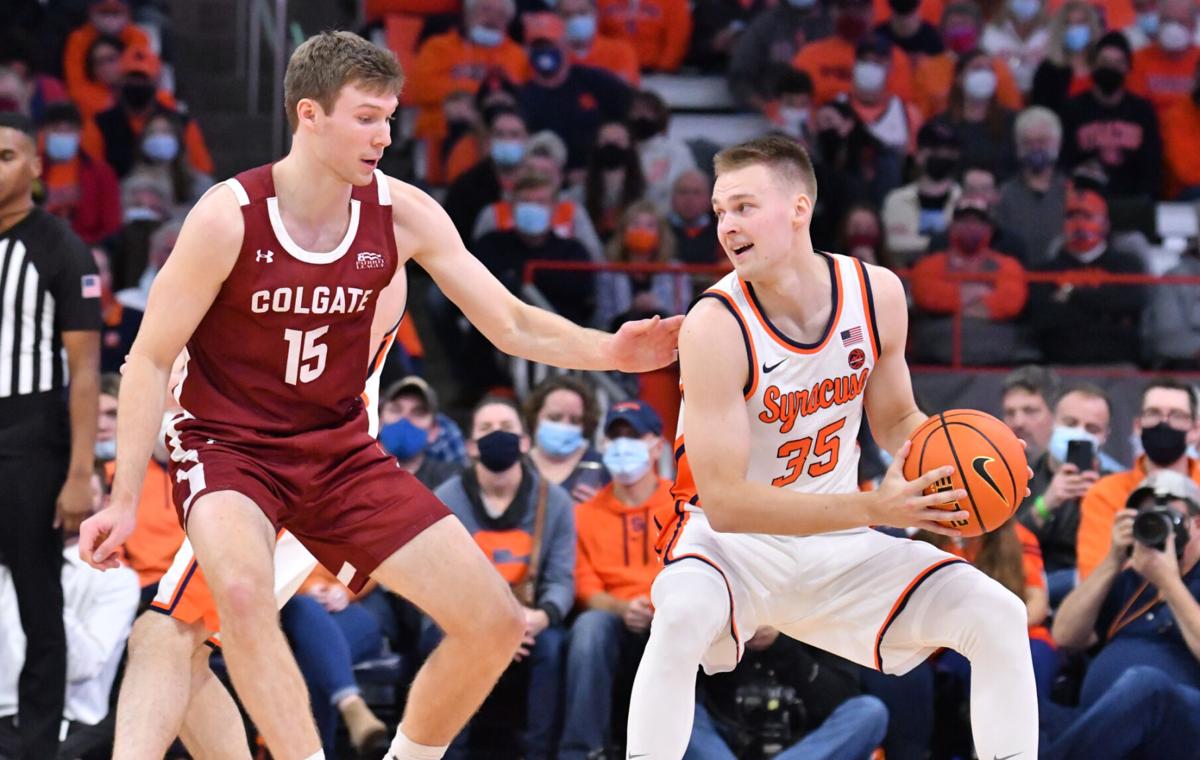 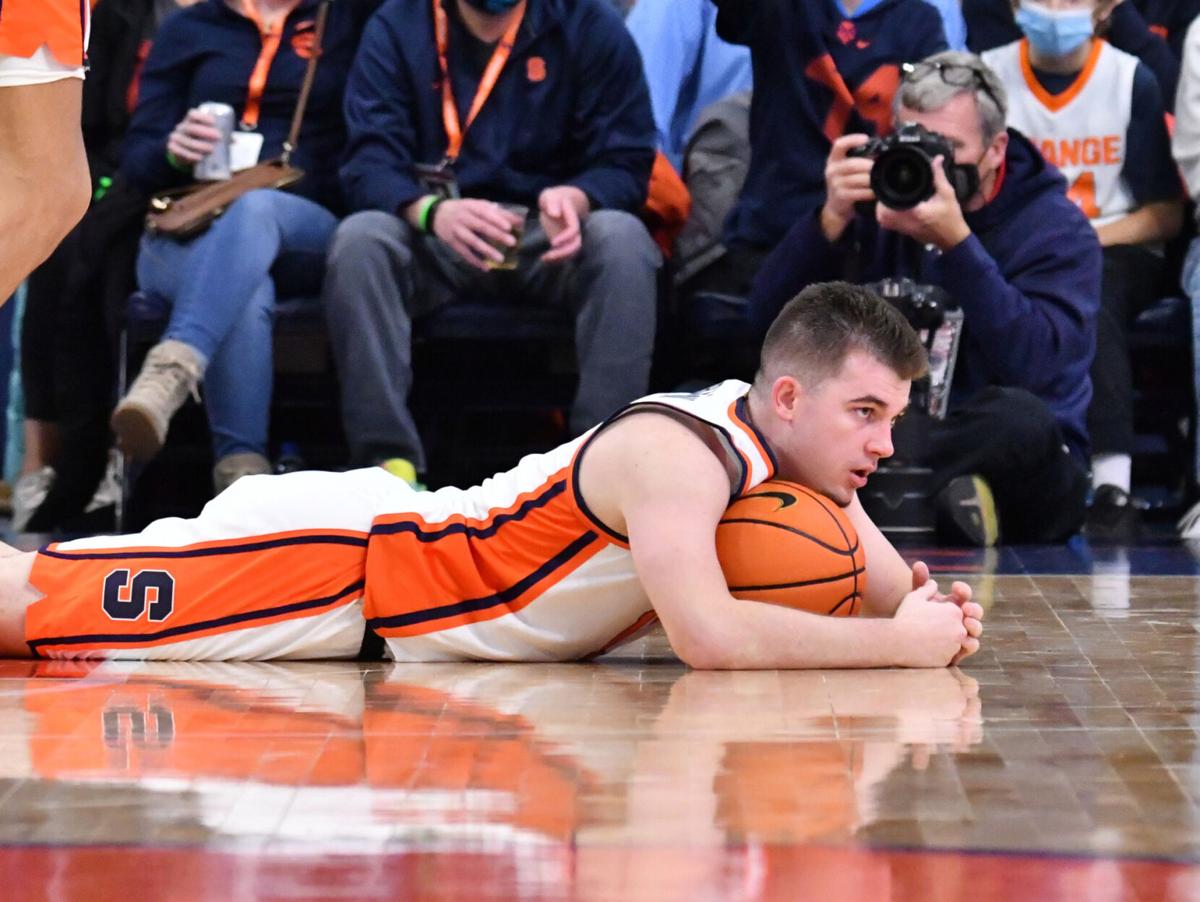 Syracuse’s Joseph Girard III recovers a loose ball against Colgate in the second half Saturday at the Carrier Dome. Mark Konezny/USA TODAY Sports 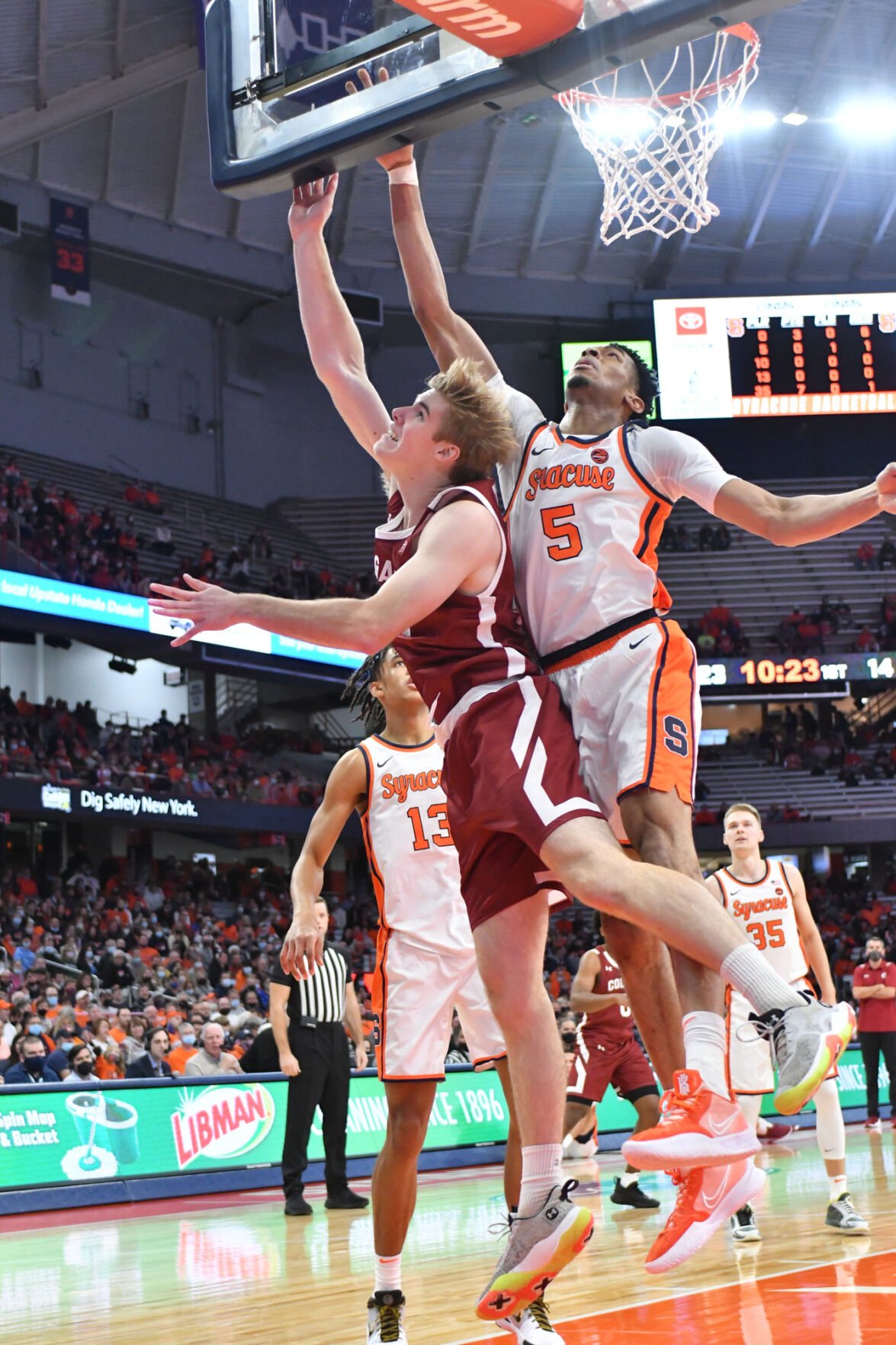 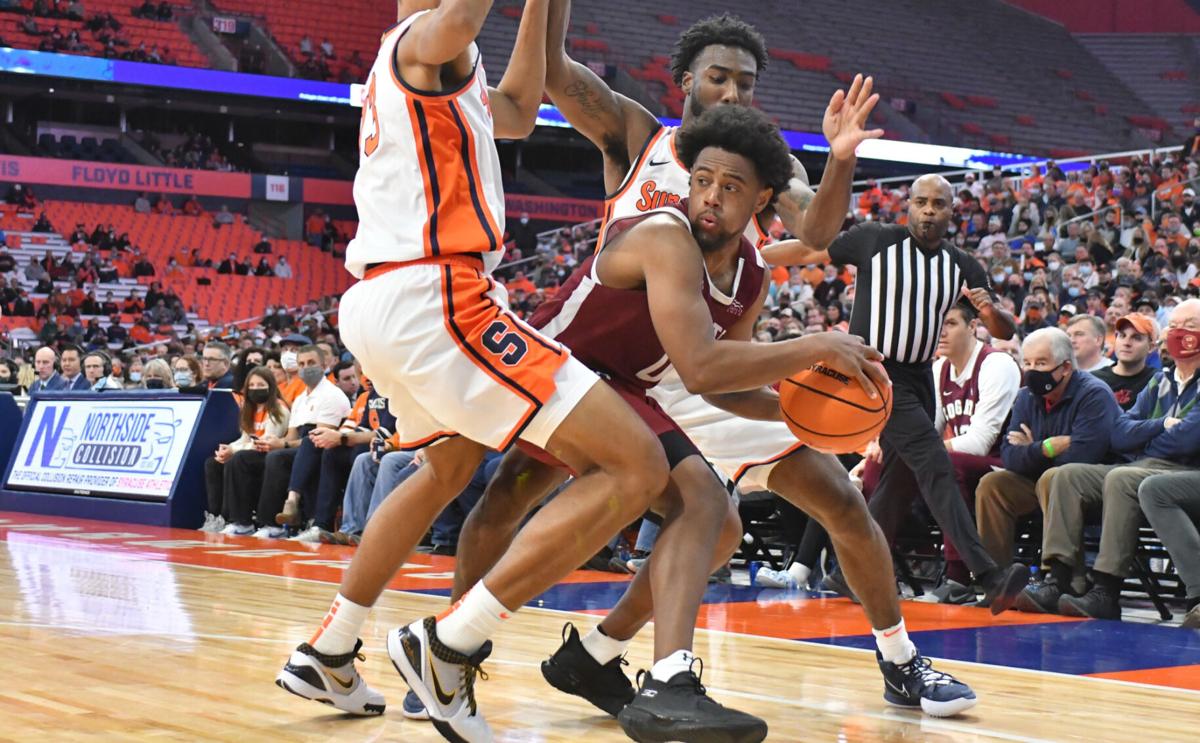 Colgate’s Nelly Cummings looks for a way around the Syracuse defense in the second half Saturday at the Carrier Dome. Mark Konezny/USA TODAY Sports

The Colgate bench reacts to a 3-point basket in the second half in the team’s win over Syracuse on Saturday. Mark Konezny/USA TODAY Sports

Syracuse’s Symir Torrence controls the ball against Colgate’s Jack Ferguson in the second half Saturday at the Carrier Dome. Mark Konezny/USA TODAY Sports

Syracuse’s Joseph Girard III recovers a loose ball against Colgate in the second half Saturday at the Carrier Dome. Mark Konezny/USA TODAY Sports

Colgate’s Nelly Cummings looks for a way around the Syracuse defense in the second half Saturday at the Carrier Dome. Mark Konezny/USA TODAY Sports

Graduate seniors Jack Ferguson and Nelly Cummings connected on six 3-pointers apiece to lift the Raiders to a stunning 100-85 nonconference victory over the Syracuse Orange in front of 15,604 fans Saturday night in the Carrier Dome.

Colgate snapped a 54-game losing streak against Syracuse and beat its in-state foe for the first time since 1962. The Orange holds a 127-46 edge in the all-time series over the Raiders, their most frequently-played opponent.

“I live on a fantastic street in Hamilton, and finally I think some people on my own block were rooting for us in this game as opposed to flying their Orange on this Saturday,” Langel said afterward. “When you’re a small school like ours and our guys work just as hard as anybody, and for our athletic department to do everything it does, I think it means a lot to a lot of people to be able to celebrate a win like this.”

Colgate (3-2) kept firing to shake off a rough shooting start and connected on 18 of 43 shots from behind the 3-point arc overall. They matched Virginia (March 2019) for the most 3-pointers made against SU in a single game while marking the most 3-point attempts ever taken against the Orange.

The Raiders started by missing their first 12 shots from behind the arc and fell into an early 17-2 hole but bounced back by making nine of their next 13 attempts from deep to take a 46-43 advantage into halftime.

“They moved it really well, got in the high post easily, and they showed a lot of patience, they really took their time with it and moved it in and out and made us work,” SU guard Buddy Boeheim said of Colgate’s offense. “They’re a tough team, they really executed tonight.”

Colgate stayed hot after the break and went 7-for-15 on 3-point field goals in the second half to maintain their edge the rest of the way. Ferguson finished with a team-high 25 points and Cummings delivered 18 — each finishing 6-for-13 on 3-pointers.

Syracuse allowed 100 points for the first time since a 101-90 double overtime loss to Florida State in January 2018.

“Defensively, we’re not winning any games if this is the defense,” said 46th-year SU head coach Jim Boeheim, the 77-year-old who was a senior at Lyons High School the last time SU lost to Colgate.

“Colgate is a better team than most anybody we’ll play against a zone, but there will be teams that are good against it, and we obviously need to get a lot better,” he continued. “We did a terrible job of adjusting and keeping the ball out of the high post, and when it did get in there, we just didn’t handle it very well. But overall, we can’t play defense like this, and hopefully we’ll be able to learn from it.”

Colgate, which won the Patriot League to advance to the NCAA Tournament last year, also outmuscled Syracuse with a 44-34 edge on rebounds, including 19 offensive boards to help the Raiders extend possessions and set up open 3-point looks.

Joe Girard III led Syracuse (2-1 overall) with 27 points and eight assists, making 5 of 8 from behind the arc to improve his season total to 13-for-16 on 3-pointers.

Buddy Boeheim added 19 points while Jimmy Boeheim delivered a double-double of 10 points and 11 rebounds. The Orange was held to a 7-for-23 performance from behind the arc after entering as one of two teams in NCAA Division I to shoot at least 50 percent on 3-pointers.

Syracuse is next slated to face Virginia Commonwealth at 5 p.m. Wednesday to begin the Battle 4 Atlantis Tournament at Paradise Island in the Bahamas. SU will face either Arizona State or Baylor the next day and an opponent to be determined on Friday.

“We got to clean it up, rebound better and play better defense,” Buddy Boeheim said. “We scored the ball, but defense was huge, that’s a veteran team and they’re going to keep going no matter how we start. It’s a quick turnaround though, we’ve got to learn from this and get ready for the Bahamas.”