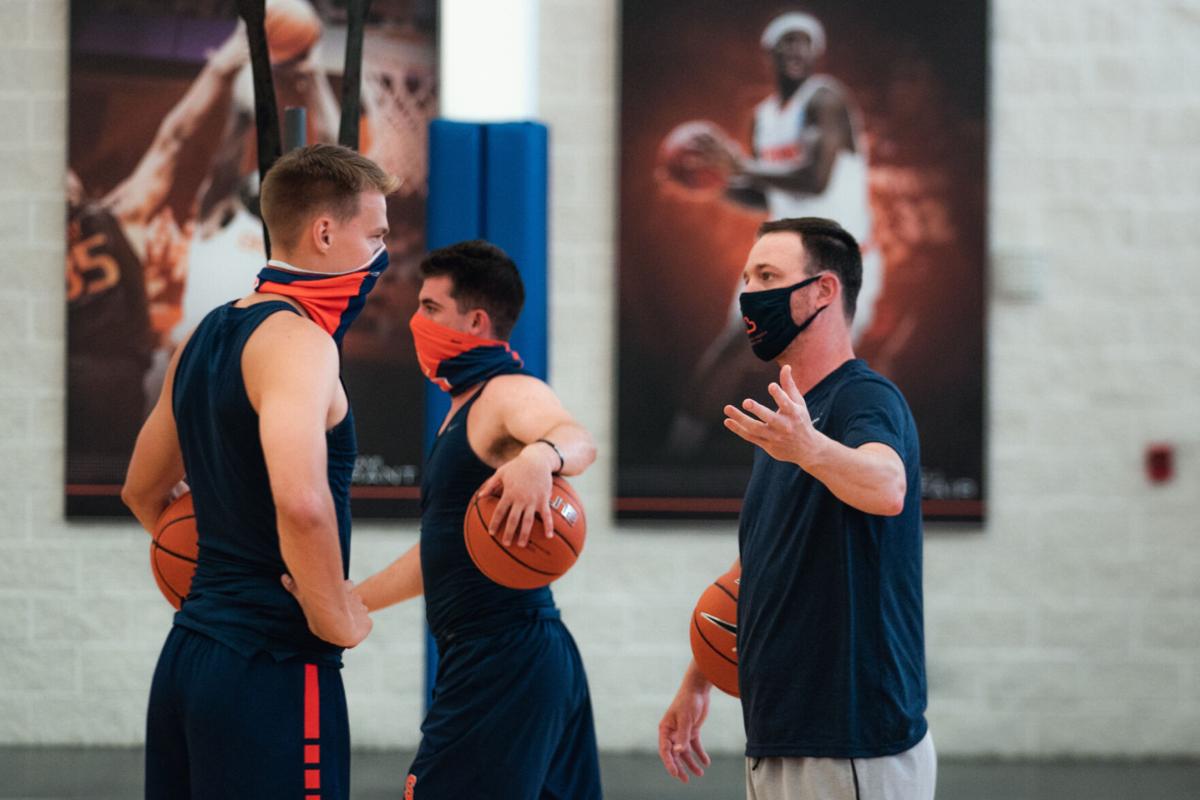 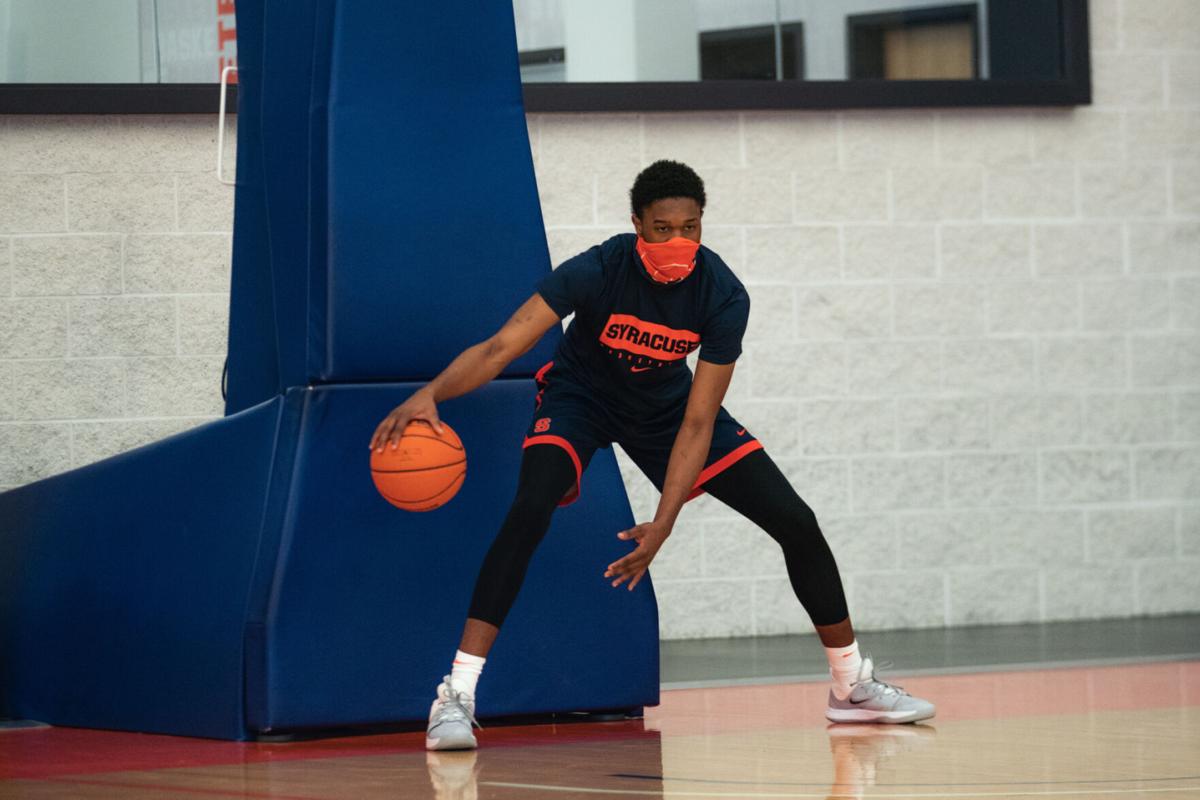 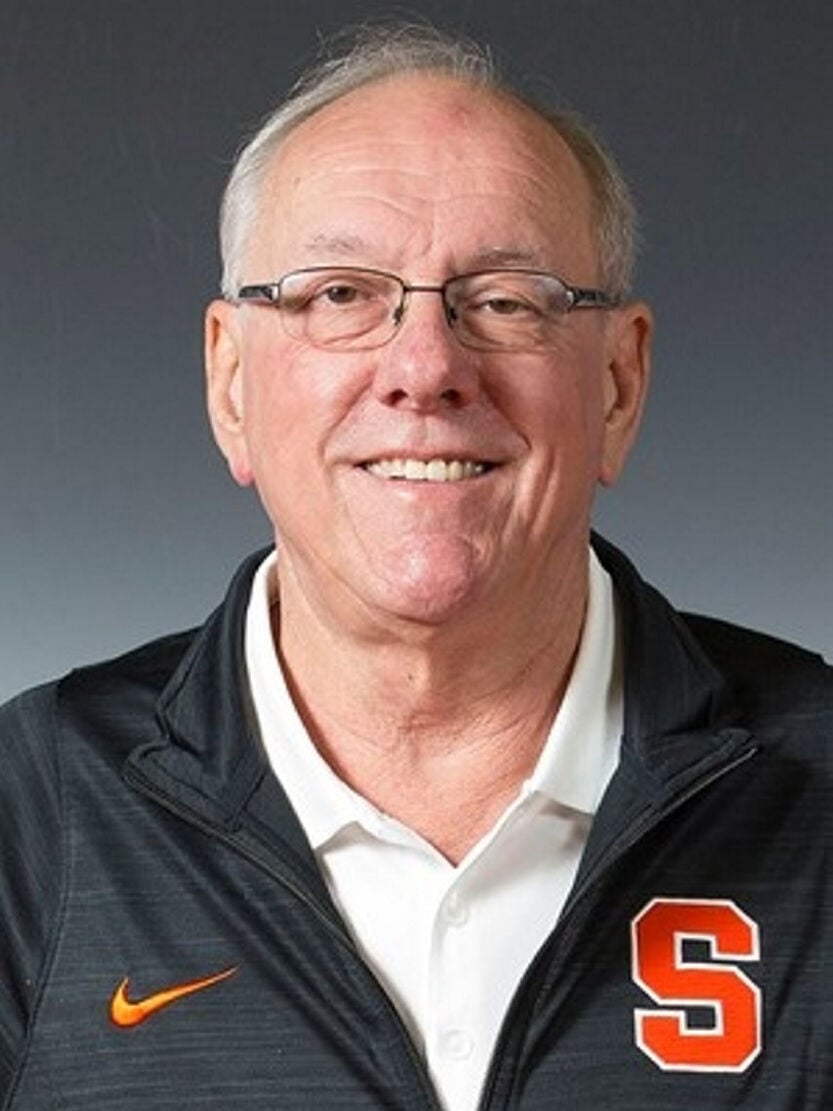 As the immediate future of NCAA athletics begins to take shape amid a myriad of debate, the Syracuse University men’s basketball team is working through a relatively normal summer at the Carmelo K. Anthony Basketball Center.

Orange players have been on campus for most of the past month, taking summer classes, and were eligible to begin voluntary workouts July 20, receiving up to four hours of individual instruction with the coaching staff in the gym and four hours in the weight room each week.

Syracuse head coach Jim Boeheim, who will begin his 45th year at the helm this upcoming season, said that the full unit has returned to campus healthy and even with the addition of COVID-19 testing and safety protocol, seem to be experiencing a traditional summer training routine.

“The players are about as isolated as they can be and they’re getting an opportunity to take a couple classes and to play basketball, which is what they love to do,” Boeheim said. “They’re happy to be back here and not sitting home, and we’ll just have to see how the future unfolds.”

The SU men’s team is following the same safety guidelines to prevent the potential spread of COVID-19 as the women’s program, which also started on-campus workouts July 20, and a similar plan for the football squad that returned for on-campus training in early June and recently progressed into group stages.

All players, coaches, and other personnel undergo temperature checks each day when they arrive to the Melo Center, and student-athletes are monitored to ensure they are practicing social distancing away from the practice facilities.

Each member of the team and staff was tested for COVID when they arrived and are being tested biweekly, and masks are being worn at the facilities.

“Everybody is healthy and able to go,” Boeheim said. “I think they’re safer here than they would be anywhere else because we can monitor them, and make sure they understand they can’t go out to places where there are lots of people.”

Syracuse has returned four of its starters from last season for the voluntary sessions — guards Joe Girard III and Buddy Boeheim, forward Marek Dolezaj, and center Bourama Sidibe — along with key reserve forward Quincy Guerrier and a host of newcomers and intriguing young options from last season.

Illinois transfer forward Alan Griffin, whose eligibility status for the upcoming campaign has yet to be determined by the NCAA, has made his arrival along with three incoming freshmen — forwards Kadary Richmond and Woody Newton and center Frank Anselem.

Jim Boeheim said that the overall fitness level of the group has stood out thus far after more than four months away from the strength-and-conditioning staff, and specifically noted that Dolezaj and Sidibe each looked to have gained about 20 pounds to help them battle in the paint.

“I think it’s exciting to get them back here, we have a good veteran group and some good young players, I’m really excited about this group,” Boeheim said. “They all look like they’ve been working and keeping in shape. They’re in a good place right now.”

The ACC released plans earlier this week for a safe return to competition for fall sports and like the other major conferences, has yet to alter its basketball scheduling model for the 2020-21 season. The Ivy League and a variety of Division II and III leagues have canceled all sports until at least January.

Boeheim remains optimistic regarding the viability of the upcoming NCAA men’s basketball season and said that he was encouraged by the recent return of pro sports leagues and organizations around the globe.

“There are a lot of question marks obviously, but you have to fight this virus, you can’t just give up and go home,” he added. “It’s not going to go away anytime soon, I don’t think, and I have grave doubts we’ll have a workable vaccine for another year or so from doctors I’ve talked to.”

The Orange is slated to train for an additional three weeks leading into the start of SU fall courses Aug. 23. The team traditionally begins the season with two exhibition games in late October.

“At some point in time they’ll try to figure out what we can do (for the season), they’re playing with things right now and we’ll have to get guidance from that,” Boeheim said. “We will see how football goes, most teams are practicing now, and we’ll see, kids at this age group, generally if they are positive they’re back at practice in a couple weeks and they’re healthy, so we’ll see how everything plays out through this.”