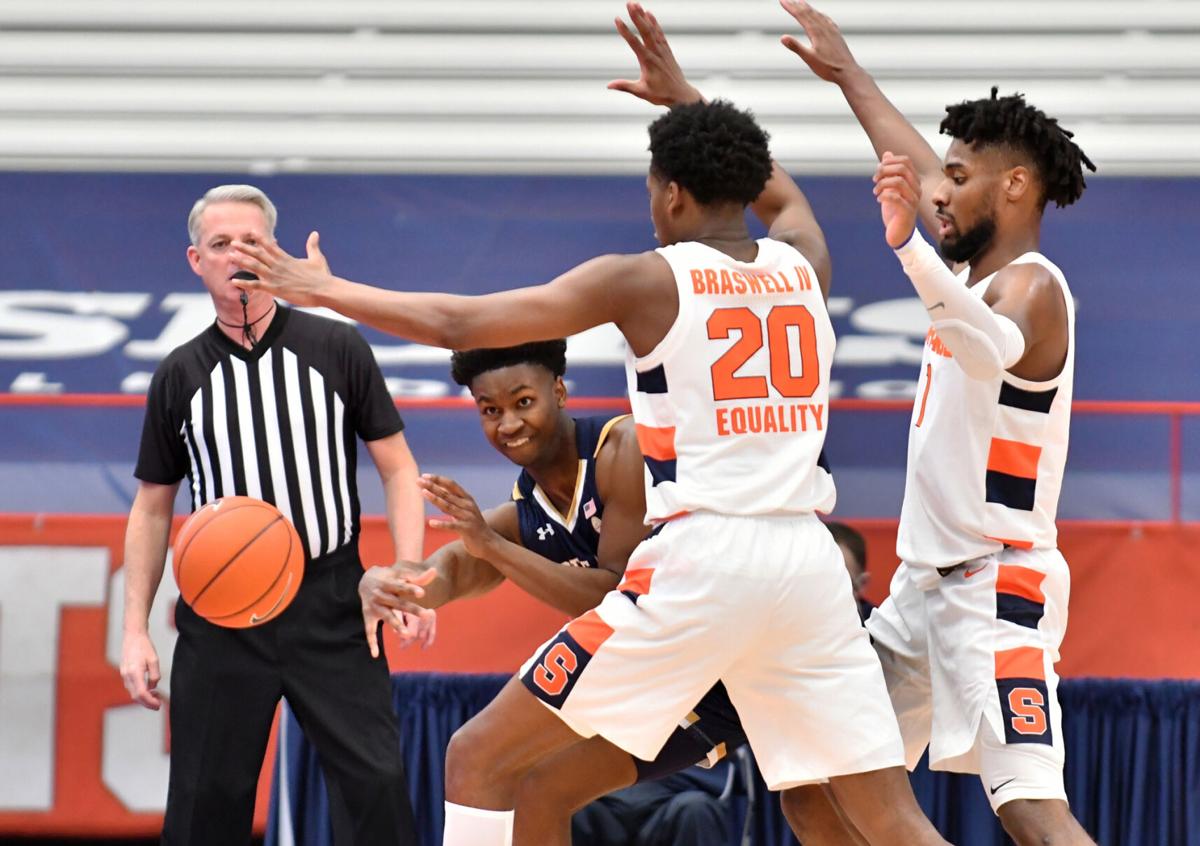 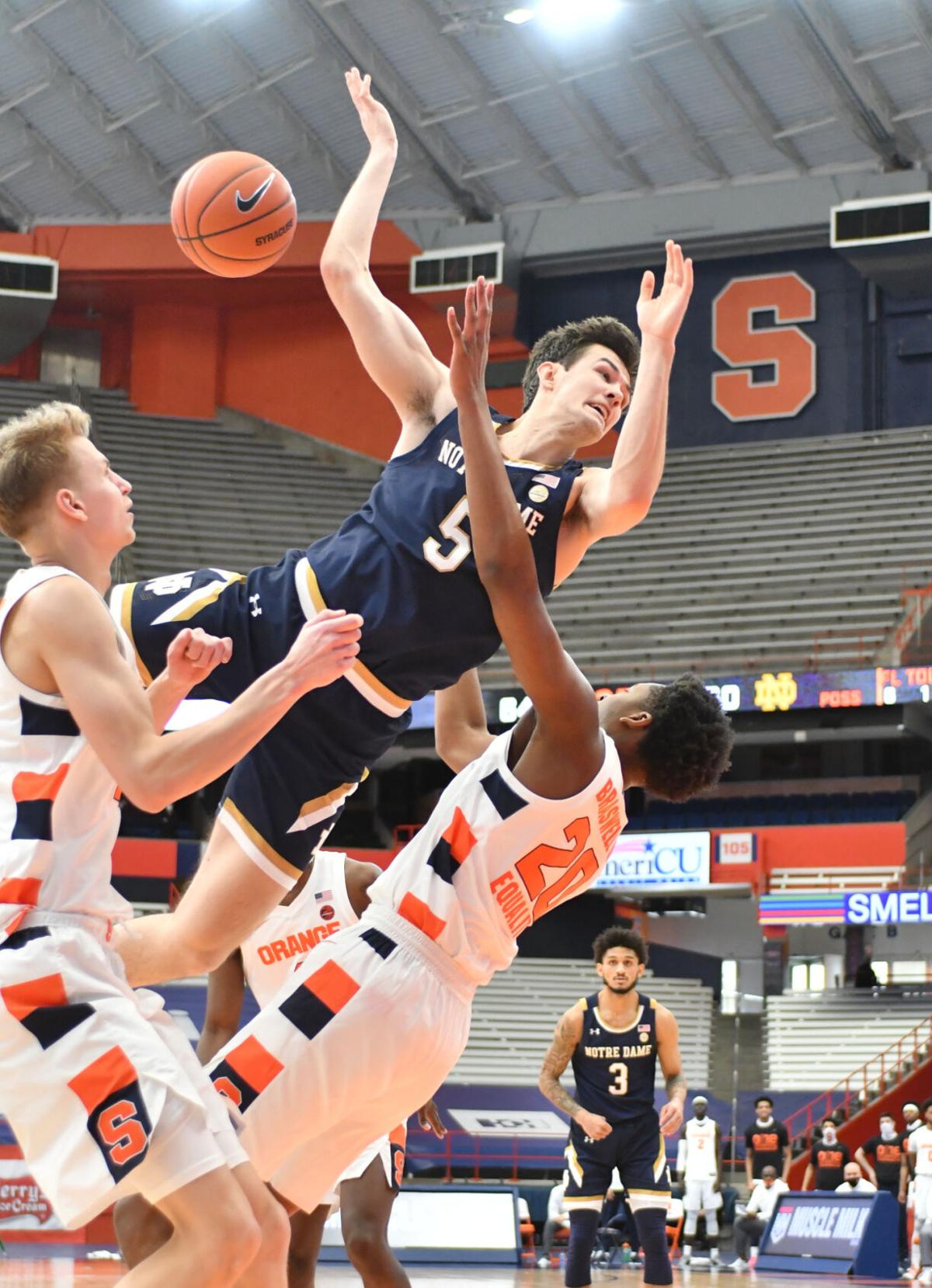 Notre Dame Fighting Irish guard Cormac Ryan is called for a charge against Syracuse Orange forward Robert Braswell in the second half at the Carrier Dome. Mark Konezny/USA TODAY Sports 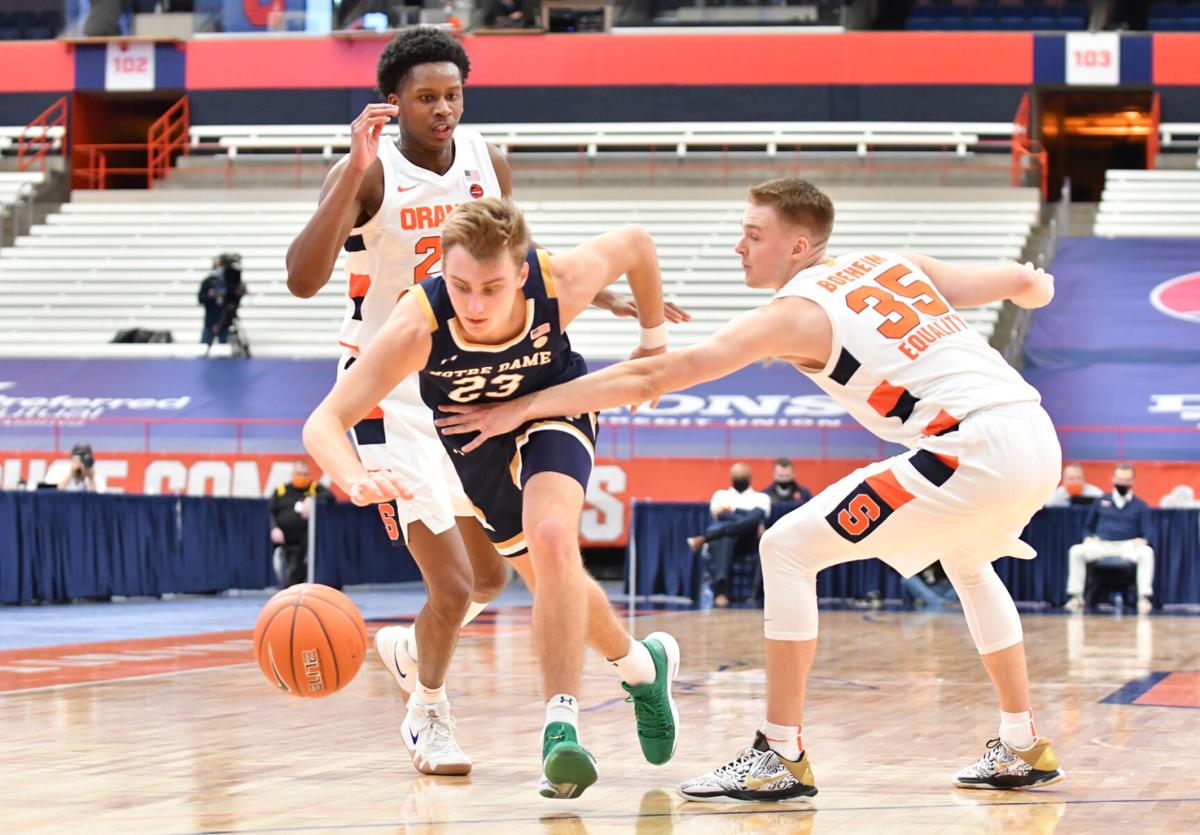 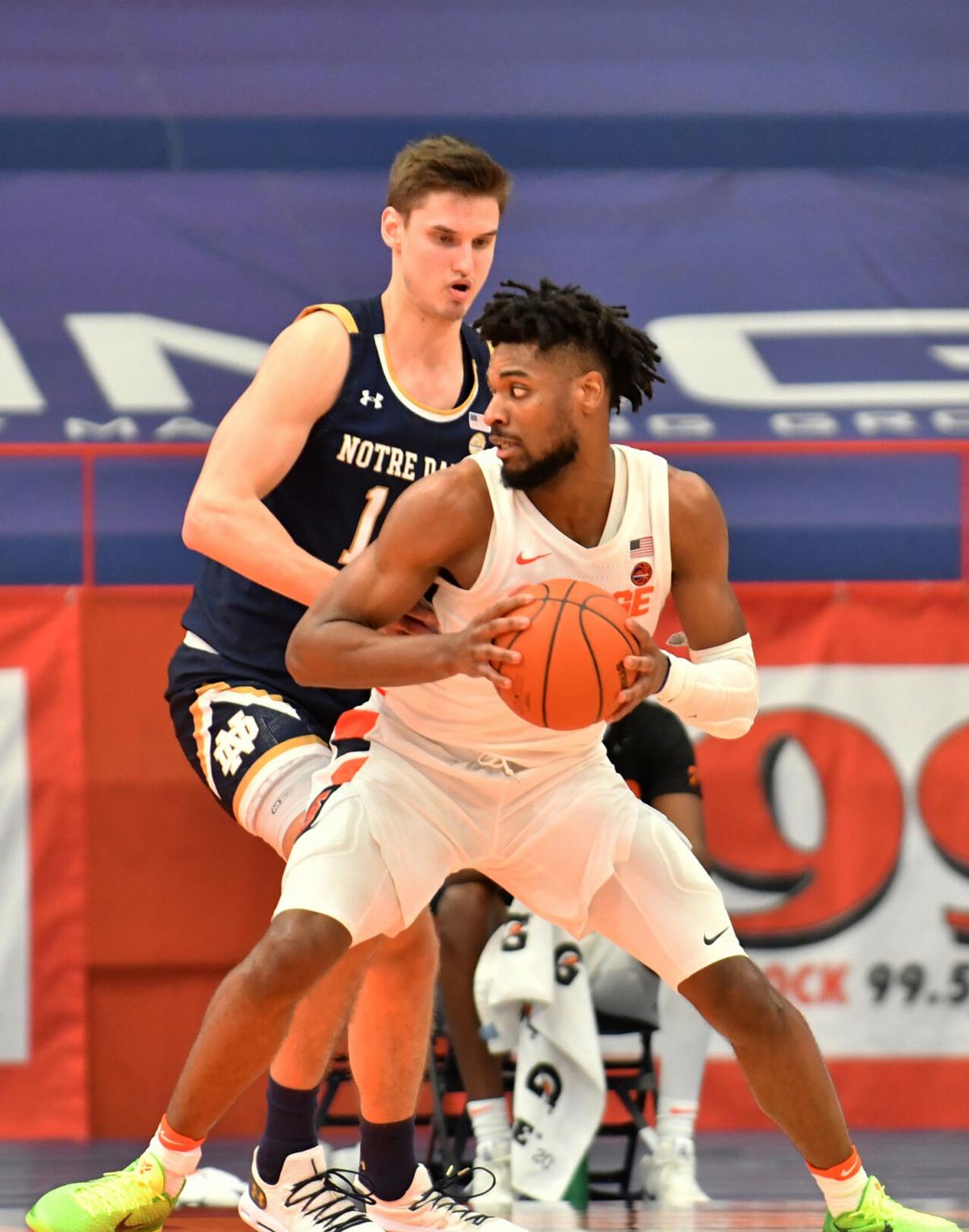 Notre Dame Fighting Irish guard Cormac Ryan is called for a charge against Syracuse Orange forward Robert Braswell in the second half at the Carrier Dome. Mark Konezny/USA TODAY Sports

Syracuse turned to the full-court press to help erase a 20-point deficit in the second half, and Buddy Boeheim scored 20 of his career-high 29 points after the break to lead all scorers and fuel a 75-67 Atlantic Coast Conference victory over Notre Dame in the Carrier Dome.

No fans were present due to state COVID-19 mandates barring spectators until at least Tuesday.

Syracuse (13-6 overall, 7-5 ACC) improved to 11-1 at home, has won six of its past eight games overall, and is next scheduled to play at 7 p.m. Monday at Duke in a conference game to be televised on ESPN.

The 20-point comeback engineered by the Orange matched the largest by an ACC team this season.

“This game was one of the better comebacks I’ve had here in a long time,” Jim Boeheim said. “It was a great win, I’m really proud of this team. We were a long way behind in this game and they’re a veteran team and they’ve been playing really well, so this was a great win.”

The Orange fell behind by 20 points early in the second half and eventually trailed, 55-41, with 15 minutes and 11 seconds left when it first utilized the full-court defense and disrupted the Fighting Irish’s well-established rhythm.

Notre Dame finished with the same number of turnovers and made field goals in the second half — eight — and was outscored 34-12 over the final 15 minutes after SU turned to the press.

The Orange produced a 23-2 second-half scoring run to complete the comeback and seize control of the game, taking its first advantage when Buddy Boeheim drained a 3-point field goal to put SU ahead, 62-60, with 7:38 left.

“I just can’t believe the stops we got, that the press worked so well,” Jim Boeheim said. “I was hoping that the press would work a little bit, it worked a lot better than that. It got our aggression going on defense, we were more aggressive defensively and we moved better. They weren’t just missing shots, we weren’t giving them shots, and that’s hard to do against a team like Notre Dame.”

Buddy Boeheim produced a 9-0 solo run during SU’s comeback and finished 10-for-19 from the field and 6-for-10 on 3-pointers. He went 5-for-8 from deep in the second half and added three steals.

Boeheim reached 20 points for the fourth time this season and first since scoring 23 on Jan. 19 against Miami. Boeheim also moved into 10th place in program history for total 3-pointers, passing Todd Burgan on the all-time list. Boeheim ended the game with a career total of 182 makes from downtown.

“I think my teammates did a great job finding me, setting screens for me, they did a really good job,” Buddy Boeheim said. “I just think I got some really good looks and it felt good to finally see some go down. It was a lot of fun, getting to the rim, drawing fouls, and being aggressive. That was the biggest thing, and just not losing confidence because my teammates believe in me.”

Marek Dolezaj finished with 18 points and four assists, scoring 12 in the second half to contribute to the comeback, and Quincy Guerrier generated nine points and a game-high 14 rebounds, hauling in 10 boards after halftime.

Dane Goodwin added 13 points, Nate Laszewski posted a double-double of 11 points and 12 rebounds, while Juwan Durham propelled the strong start by scoring all his 10 points on five dunks in the opening seven minutes.

The Fighting Irish shot 54.4 percent in the first half, highlighted by a 7-for-14 performance from deep, to race out to a 46-32 halftime lead that was quickly extended to 55-35 after the break. Notre Dame was held to 32 percent shooting and did not make a free throw after halftime.

Syracuse finished with a 22-11 advantage on rebounds in the second half and made nine of its 11 free throws after the break — connecting on a perfect 11-for-11 to continue its program-record pace.

Afterward, Jim Boeheim clarified recent remarks made on his weekly radio show that garnered a rebuke from Jay Bilas, among other ESPN personalities. Bilas accused Boeheim of unfairly criticizing Duke freshman Jalen Johnson for opting out of the remainder of the season when Boeheim stated that he believes Duke has played better without Johnson over its last two games in response to a question.

“This is no casting aspersion on Jalen Johnson, he’s a tremendous player and will probably be a great pro,” Boeheim said of the national reaction to his comment.

“I just made the observation that I thought they played better without him in those two games. ... Just in that game and a half, they were a better team than what I saw all year. Some people have said he shouldn’t leave school, I didn’t say that, some people have said he’s not thinking about his team, I didn’t say that. ... I was not trying to downgrade Jalen Johnson in any way, shape or form, and Jay Bilas is flat wrong if he thinks I did that.”