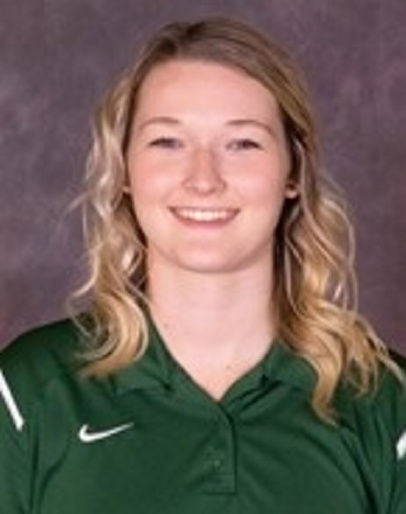 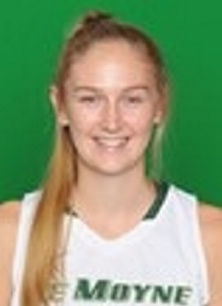 Former General Brown standout Kylee Rosbrook ranks among the team leaders during her sophomore season with the College at Brockport women’s basketball team.

Rosbrook, a 6-foot forward, is averaging 10 points per game, good for second on the Golden Eagles, and is one of just two players who has started all 23 games for Brockport this season.

Rosbrook leads the team in total rebounding (150) and average rebounding (6.5) and is the team’s top shot-blocker with 21.

Rosbrook scored 14 points and contributed five assists in Brockport’s 67-58 victory over Fredonia on Feb. 11. Brockport is 10-13 overall and 7-9 in SUNYAC play.

Zimmerman has registered 53 blocks for the Dolphins through 24 games. She’s averaging 10.3 points per game and has started every game for Le Moyne.

Zimmerman rates as Le Moyne’s top rebounder at 7.8 per game and ranks among the Dolphins’ team leaders in assists and steals.

In Le Moyne’s game Saturday, Zimmerman scored 11 points in the third quarter to rally Le Moyne (16-8, 12-5 Northeast 10) to a 69-58 victory at Southern Connecticut State University. She finished with 20 points and added 10 rebounds for her third double-double of the season.

n Zimmerman’s older sister, Quincey, ranks fourth on the Oswego State women’s basketball team in scoring with 7.9 ppg. Quincey Zimmerman has played in 17 games for the Lakers (6-15, 2-13) in her senior season and is fourth on the team in rebounding average at 5.9.

Former Heuvelton standout Paige McCormick is sixth in scoring and fifth in rebounding for the Division I UMass Minutewomen during her junior season.

Former Parishville-Hopkinton athlete Claire Snell and Madrid-Waddington athlete Olivia Parmeter have each played in all 19 games for the Albany College of Pharmacy women’s basketball team and rank in the top three in scoring.

Snell, a freshman, is averaging 12.4 points per game, good for second on the 4-16 Panthers. She leads the team in minutes.

Parmeter, a junior forward, is third on the team with 8.6 ppg and leads the squad in field goal percentage.

Freshman Erica Sloan, a former Parishville-Hopkinton athlete, contributed her seventh goal of the season during Utica College’s 2-0 over Wilkes University on Saturday, wrapping up a weekend sweep of the Colonels in Utica.

Sloan is tied for third on the Pioneers in scoring with seven goals and eight assists for 15 points. She’s one of two players on the team with at least two power-play goals and has skated in each of Utica’s 23 games.

The Pioneers are 9-13-1 overall and 9-4-1 in the United Collegiate Hockey Conference.

Melfi, a sophomore, joined Jamie Alexander, Genevieve Kikukawa and Jordyn Sommo in pushing the Dolphins to a time of 1 minute, 40.87 seconds.

Hardin registered a victory by pin at 130 pounds in four minutes over Pat Owens of Cortland.

A 5-foot-7 sophomore, McHale is among the Golden Eagles’ leaders in matches played and sets played.