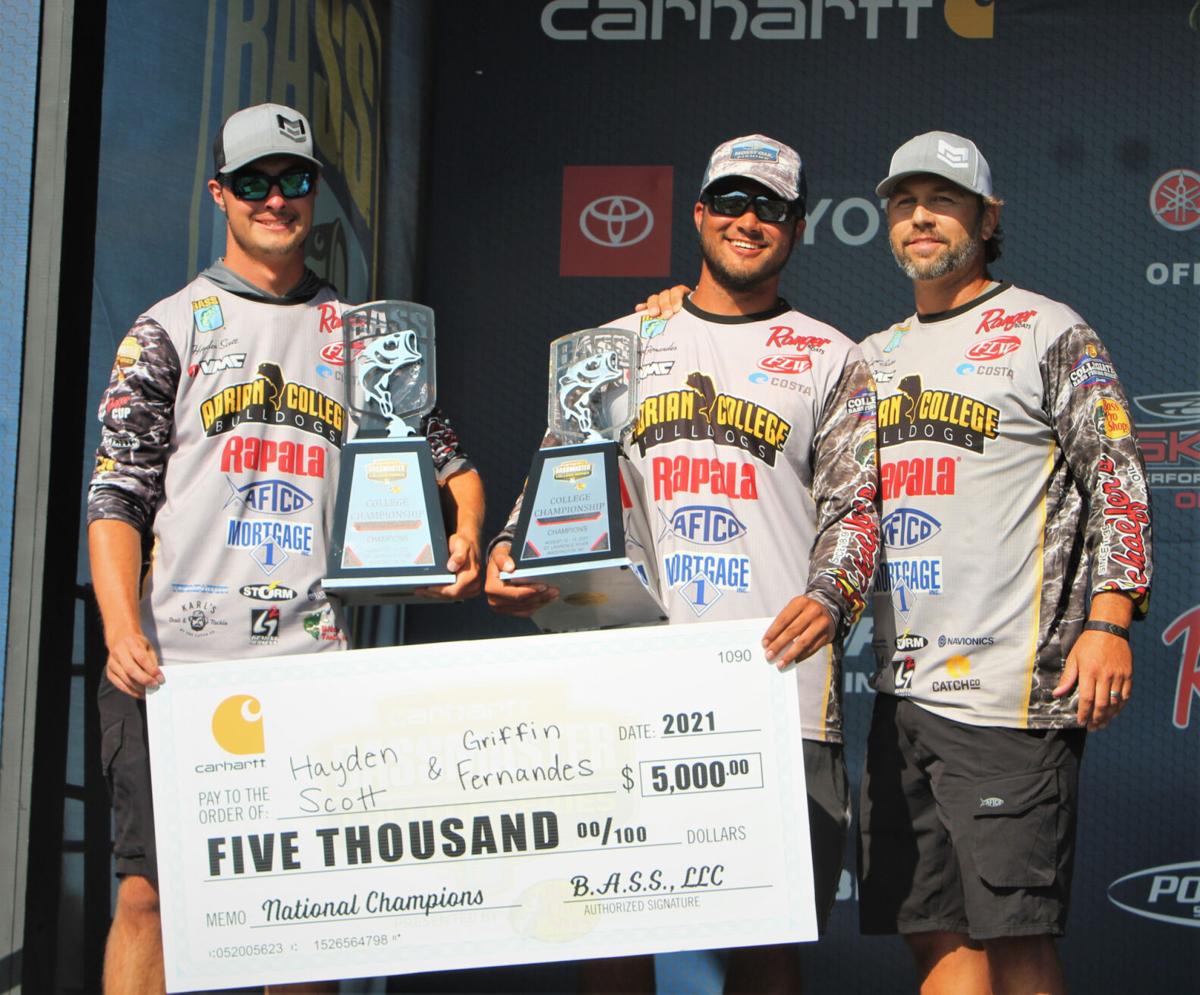 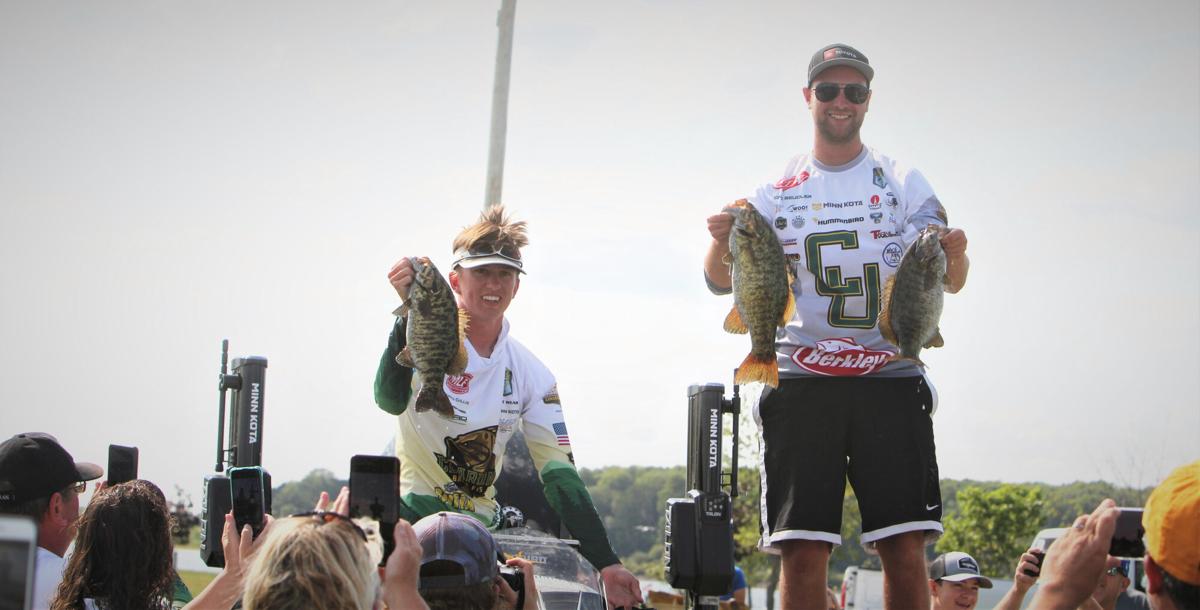 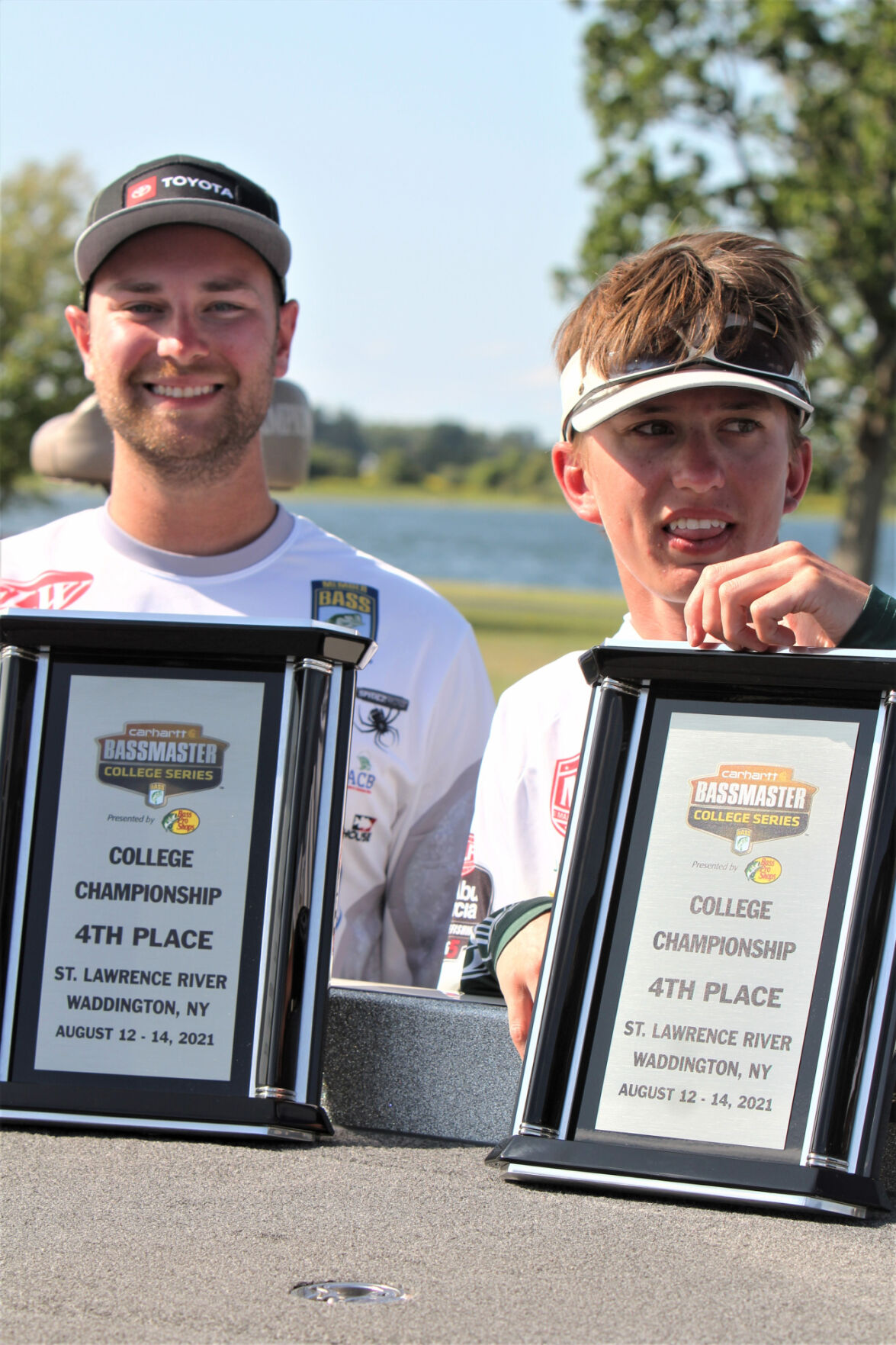 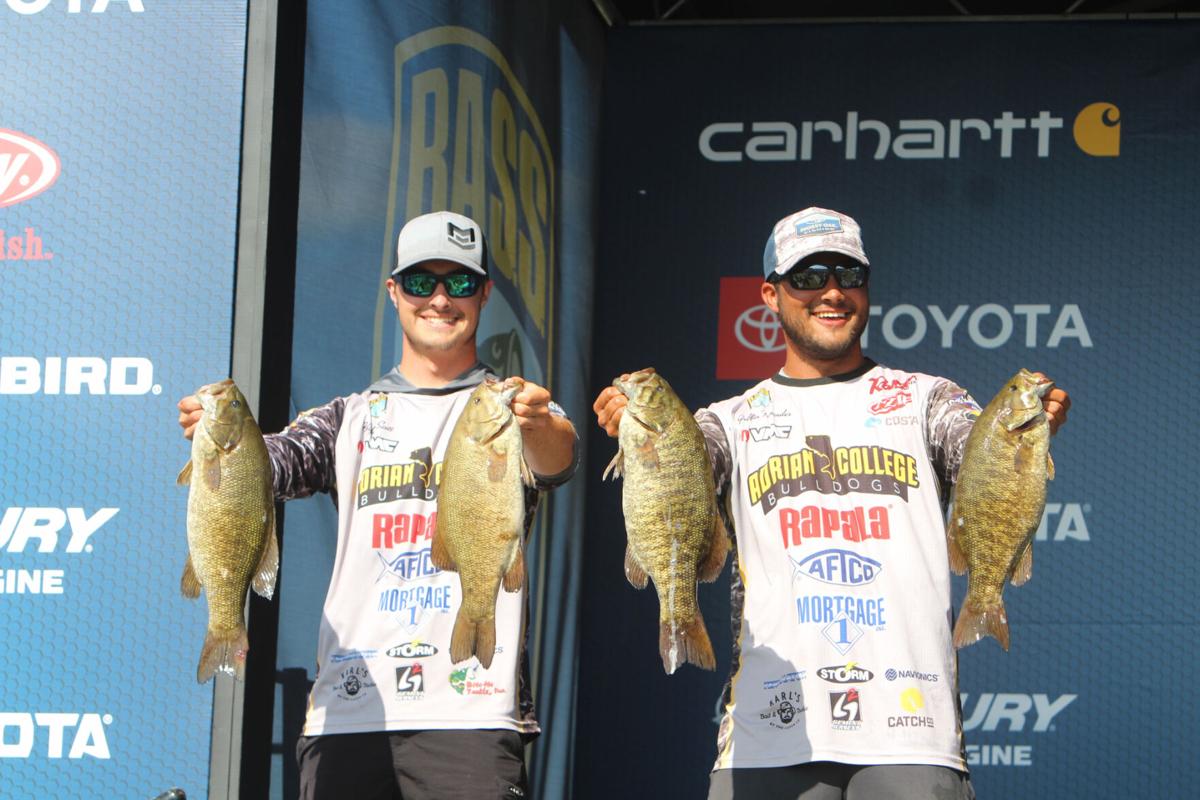 WADDINGTON — Halfway through Championship Saturday of the Carharrt Bassmaster College National Championship the Adrian College team’s expectations for the winning the title were modest, despite entering the day atop the leaderboard with a seven-ounce lead over Murray State.

“We got off to a very fast start but later in the morning we had a three-and-half pounder in the live well, which I really thought we needed to cull to win. We both missed a big fish toward the end of the day which I thought would hurt us,” said Adrian’s Griffin Fernandes.

“We needed to have a big bag because we were competing against great teams.”

The three-and-one-half smallmouth was still in the live well as Fernandes and teammate Hayden Scott waited to come to the Bassmaster Elite stage in Whittaker Park in Waddington as the 12th-and-final team to weigh in their bag of St. Lawrence River bass.

The bag weighing 20 pounds and 6 ounces, the second-biggest bag of the day, was enough to carry Adrian past second place Bethel University for the Michigan-based school’s first National Bass Fishing Championship.

“We went back to the same spot near Clayton, which we fished all three days. Today I think the key was using a three-quarter ounce tube head to get to the bottom in the current. We fished in 35-50 feet of water,” Scott said. “I have come close to championships in the past but came up short. It may take a couple of days for it to sink in.”

The Adrian and Bethel teams stood together with their arms locked as the digital reading on the scale materialized and showed Adrian with 63-10, surpassing the 63-7 for the Bethel team of Tristan McCormick and Stevie Mills. Bethel turned in the biggest bag of the tournament at 24-9 on day one and weighed in 19-13 on Saturday.

“It’s just so tough, tough, tough to win this championship because the anglers and coaches are so incredible,” said Adrian coach Seth Borton.

“But you see how these guys are great friends and they just show how special college fishing is.”

The Auburn team of Conner Crosby and James Cobbs used the day’s best bag of 21-4 to move from ninth to third place at 59-8 and edge the host Clarkson University team of James Gillis and Craig Beucler at 58-7 for third place and the third spot from the tournament for the College Bracket of the Bassmaster Classic.

The Clarkson duo, which fished in the Massena area in all three days of the tournament, weighed in 18 pounds on Saturday and moved up from fifth to fourth place.

“I couldn’t be happier for the way things turned out. We had a great tournament,” said Beucler who graduated from Clarkson with a degree in Engineering in May.

“Today we stuck with the drop shot most of the time but we caught a nice bass on a hair jig and that got us going,” Beucler said. “Fishing for Clarkson, I have loved every second of every minute.”

As a sophomore Hayden Scott looked forward to more seasons as a Clarkson angler but knows it will be tough to replace Beucler as a partner.

“Fishing with Craig has been great. He works hard every day and taught me a lot. Craig and I have fished together since I was 14. I just want to thank the New Hampshire Junior Bassmaster Clubs. They did a great job helping get where we are today.”

“I am very proud of this team. These guys work hard every single day. We became the first team to win an undisputed state championship and locked up the title at the tournament at Oneida Lake,” said Clarkson coach Guy Cromp Sr. of Oneida.

“Both of our teams had great years. We placed two teams in the top 12 (second team of Dante Piraino and Hunter Stone tied for 12 but lost by the tie-breaker to go to the final day to North Carolina State) and that is really outstanding.”

Tripp Bowman and Blakely Young of Louisiana State University-Shreveport took the Carhartt Big Bass Award with a 6-10 smallmouth they caught on Day 1.

The Village of Waddington, St. Lawrence County Chamber and Clarkson University co-hosted the tournament, which was supported by a Market New York grant from I LOVE NY/New York State’s Division of Tourism, awarded as part of the Regional Economic Development Council initiative. The tournament and all associated festivities were planned to ensure the safety of athletes, staff and guests.