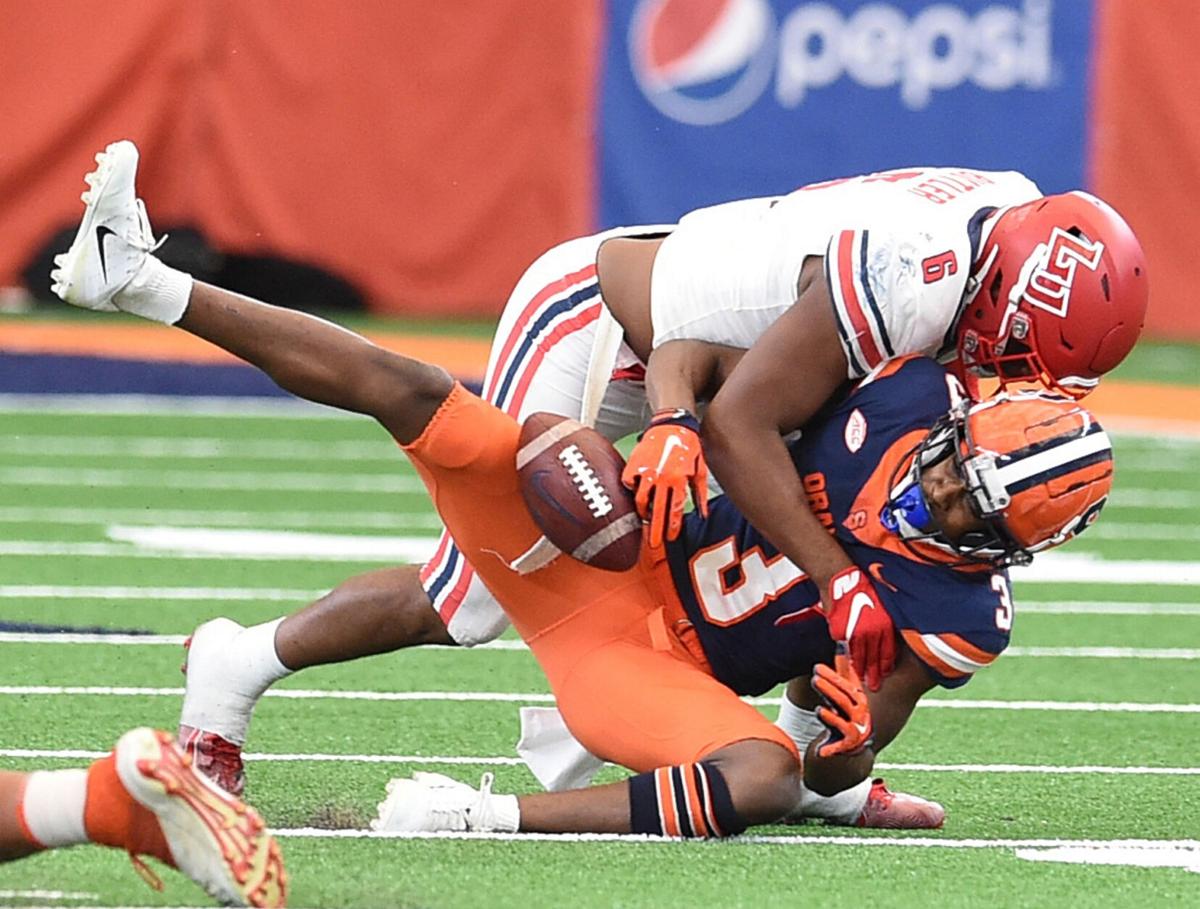 Syracuse wide receiver Taj Harris drops a pass in the second half during Saturday’s game against Liberty at the Carrier Dome. Dennis Nett/Pool Photo-USA TODAY Sports 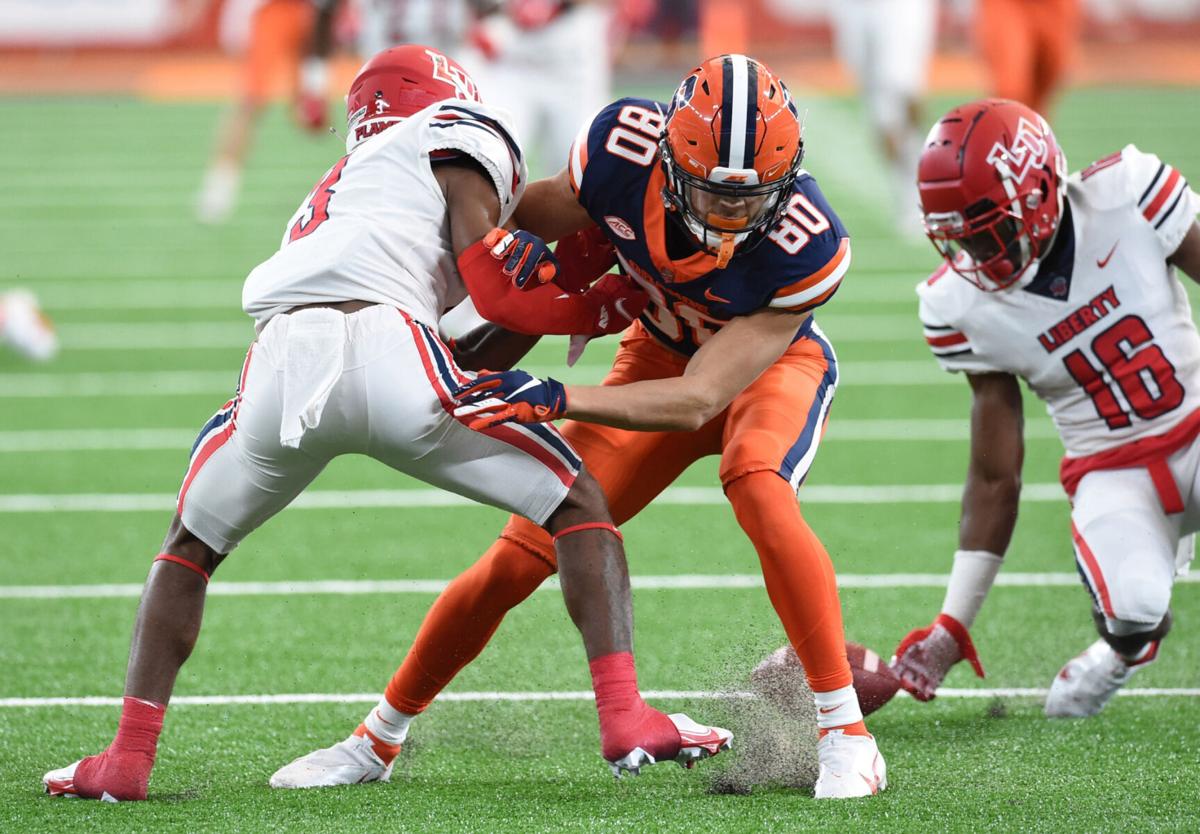 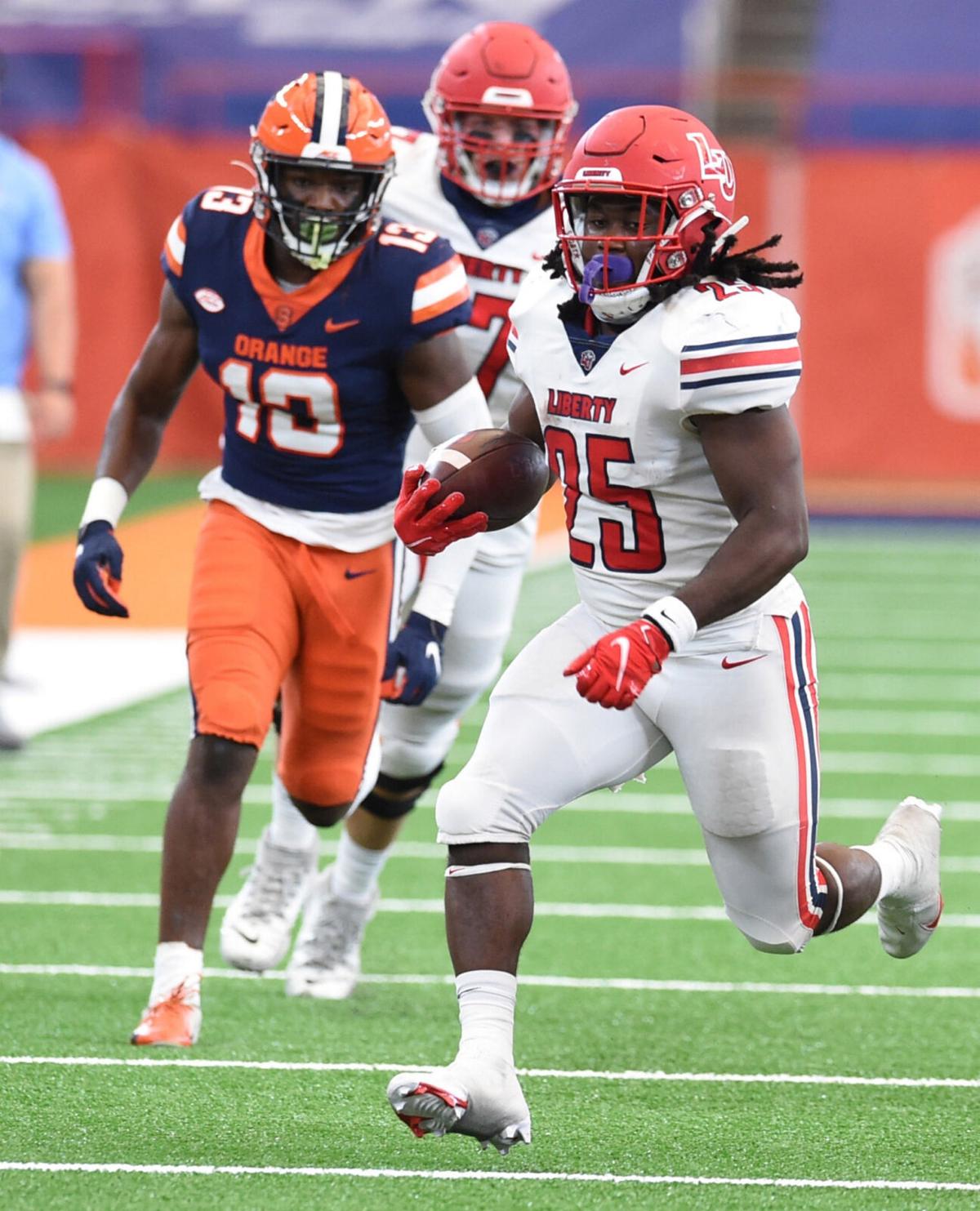 Liberty running back Peytton Pickett is shown in the first half during a game against Syracuse. Dennis Nett/Pool Photo-USA TODAY Sports 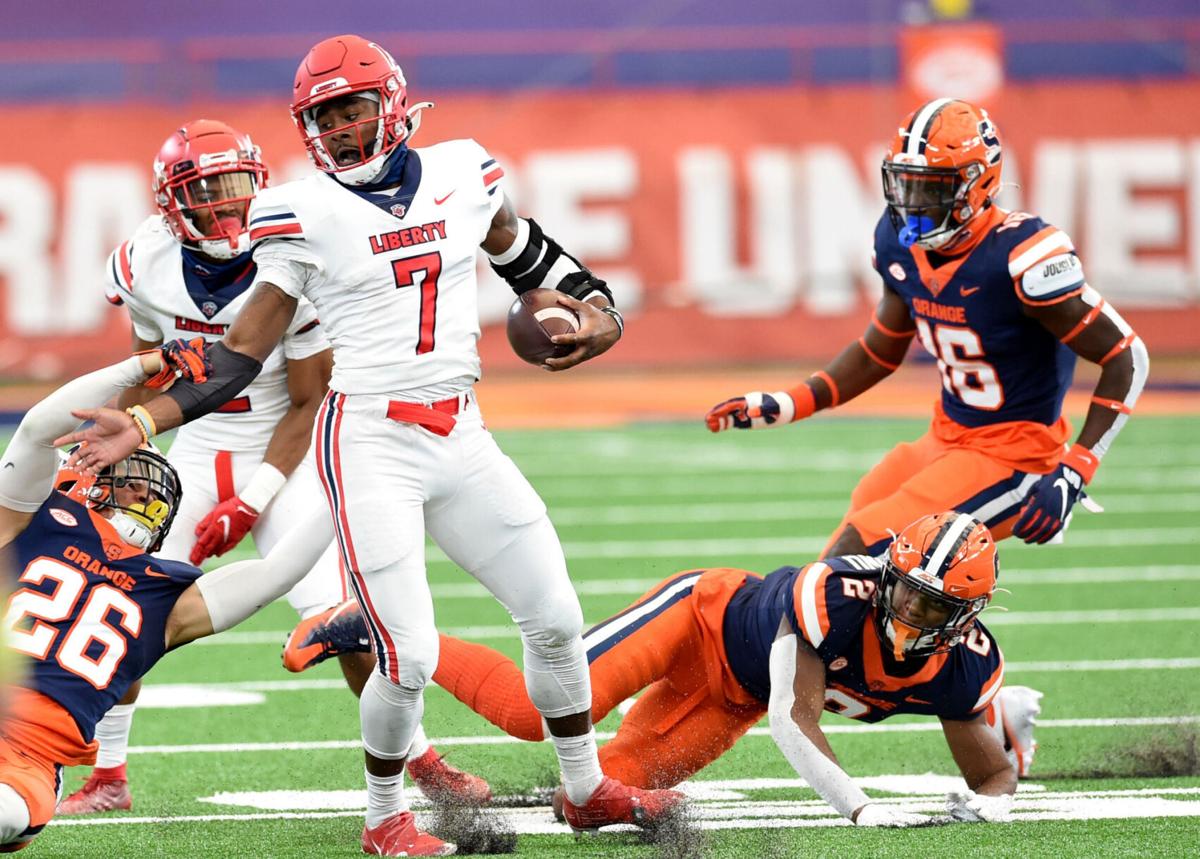 Liberty quarterback Malik Willis is shown in the first half during a game against Syracuse at the Carrier Dome. Dennis Nett/Pool Photo-USA TODAY Sports 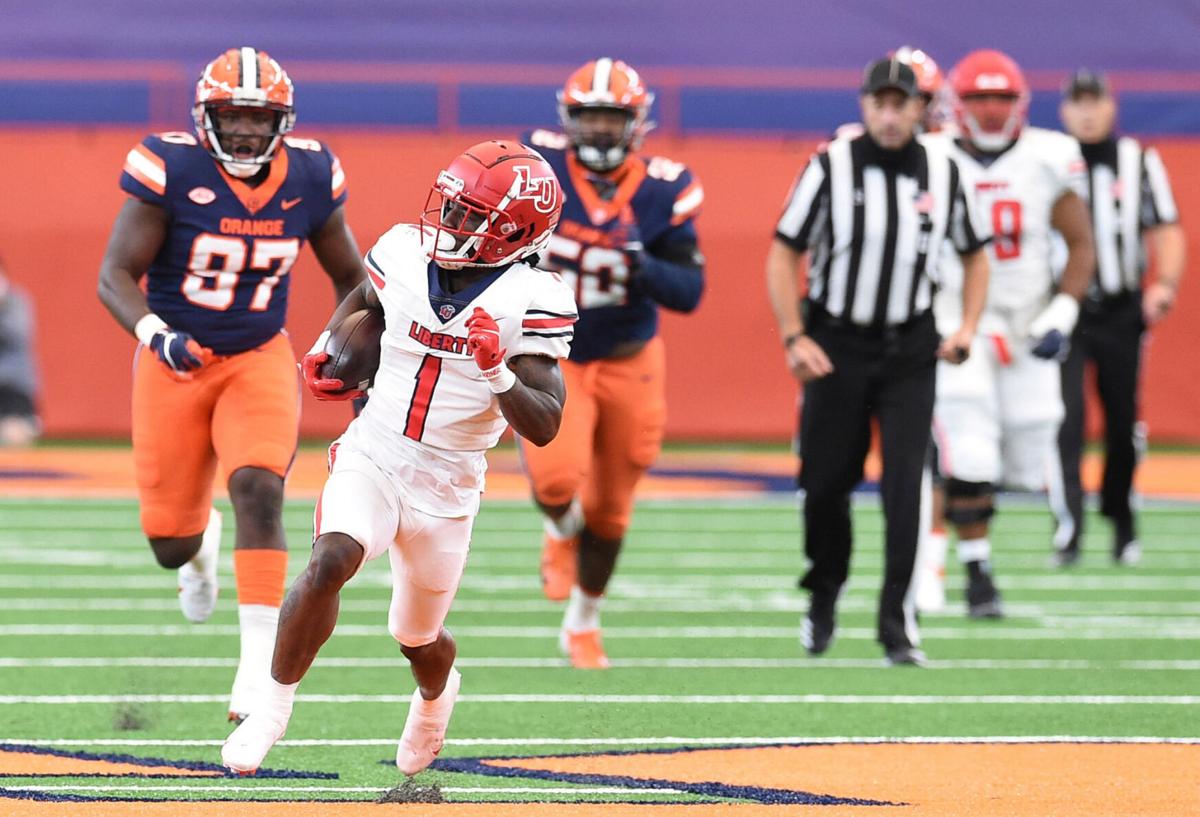 Liberty Flames running back Shedro Louis is shown in the first half during a game against Syracuse. Dennis Nett/Pool Photo-USA TODAY Sports

Syracuse wide receiver Taj Harris drops a pass in the second half during Saturday’s game against Liberty at the Carrier Dome. Dennis Nett/Pool Photo-USA TODAY Sports

Liberty running back Peytton Pickett is shown in the first half during a game against Syracuse. Dennis Nett/Pool Photo-USA TODAY Sports

Liberty quarterback Malik Willis is shown in the first half during a game against Syracuse at the Carrier Dome. Dennis Nett/Pool Photo-USA TODAY Sports

Liberty Flames running back Shedro Louis is shown in the first half during a game against Syracuse. Dennis Nett/Pool Photo-USA TODAY Sports

SYRACUSE — Liberty head football coach Hugh Freeze called Saturday’s victory over Syracuse University one that expedites the expectations for his program in its third season as an FBS independent.

That leaves the Orange, with key players out long term and a road game against the top-ranked team in the nation looming, on the opposite end of the spectrum.

The Liberty Flames racked up 338 team rushing yards despite the surprise absence of leading rusher and Rochester native Joshua Mack and took advantage of 10 SU penalties to beat the Orange, 38-21, on Saturday at the Carrier Dome.

Syracuse (1-4 overall) dropped its second in a row to close a three-game home stretch — all played without spectators due to state COVID-19 mandates — and will play an Atlantic Coast Conference game at noon next Saturday at top-ranked Clemson (5-0).

“The big thing is, we’ve got to frigging start tackling the football,” SU head coach Dino Babers said. “We have got to tackle, and you thought it was difficult this week, wait until next week.”

The Orange suffered its first nonconference home setback since losing to Middle Tennessee on Sept. 9, 2017, snapping a five-game win streak. The Flames (5-0) claimed their first victory over an ACC opponent in nine tries, and their second win over a team from a Power-Five Conference.

“It starts with the leaders, the guys that have been in this position, just trickling down the pyramid and talking to the younger guys and just being supportive, being positive, and working on the little things that we messed up on today throughout the week,” Syracuse wide receiver Anthony Queeley said.

“This shows character, it builds character,” he added. “In the locker room, everyone is staying positive and our captains are being supportive.”

Liberty sophomore Shedro Louis shredded for 170 yards on 10 carries, including first-half touchdown runs of 75 and 52 yards up the middle, the latter of which gave Liberty a 21-14 edge entering halftime.

Flames quarterback Malik Willis completed 16 of 20 passes for 182 yards and a touchdown — tossing a 36-yard score to D.J. Stubbs to extend Liberty’s edge to 28-14 in the third quarter — and added 58 yards and a short TD run on 12 carries. Peytton Pickett finished with 115 rush yards on 23 carries, including a 16-yard score late in the third quarter to push Liberty’s edge to 35-14.

“We just challenged that O-line and those two backs, and boy, did they answer in a big way, I’m really proud,” Freeze said.

For the second straight outing, the SU defense gave up at least 330 yards on the ground with multiple opposing running backs eclipsing 100 yards.

The mistakes against Liberty were not only limited to missed tackles as all three phases were impacted by a variety of ill-timed penalties — accumulating 10 for 80 yards in losses.

“The penalties are from veteran guys, they’re not from a bunch of freshmen, which is disappointing,” Babers said. “Those are guys that, you have to drop your ego so the team can go forward, you can’t get in a pushing match or some battle with some yahoo that costs us 15 yards of position. You’re not worth it, I’m not worth it, none of us are worth 15 yards in a game like that. That part is really disappointing and it has been addressed.”

Syracuse senior quarterback Rex Culpepper completed 19 of 40 passes for 211 yards and touchdowns to three different receivers in his second career start and first since 2017 in place of injured starter Tommy DeVito.

Taj Harris hauled in nine catches for 96 yards, highlighted by a 17-yard touchdown. Queeley contributed five receptions for 77 yards, including a 21-yard score, and Aaron Hackett hauled in a 12-yard TD catch.

Syracuse freshman running back Sean Tucker gained 111 rushing yards on 21 carries despite being uncertain to suit up due to injury.