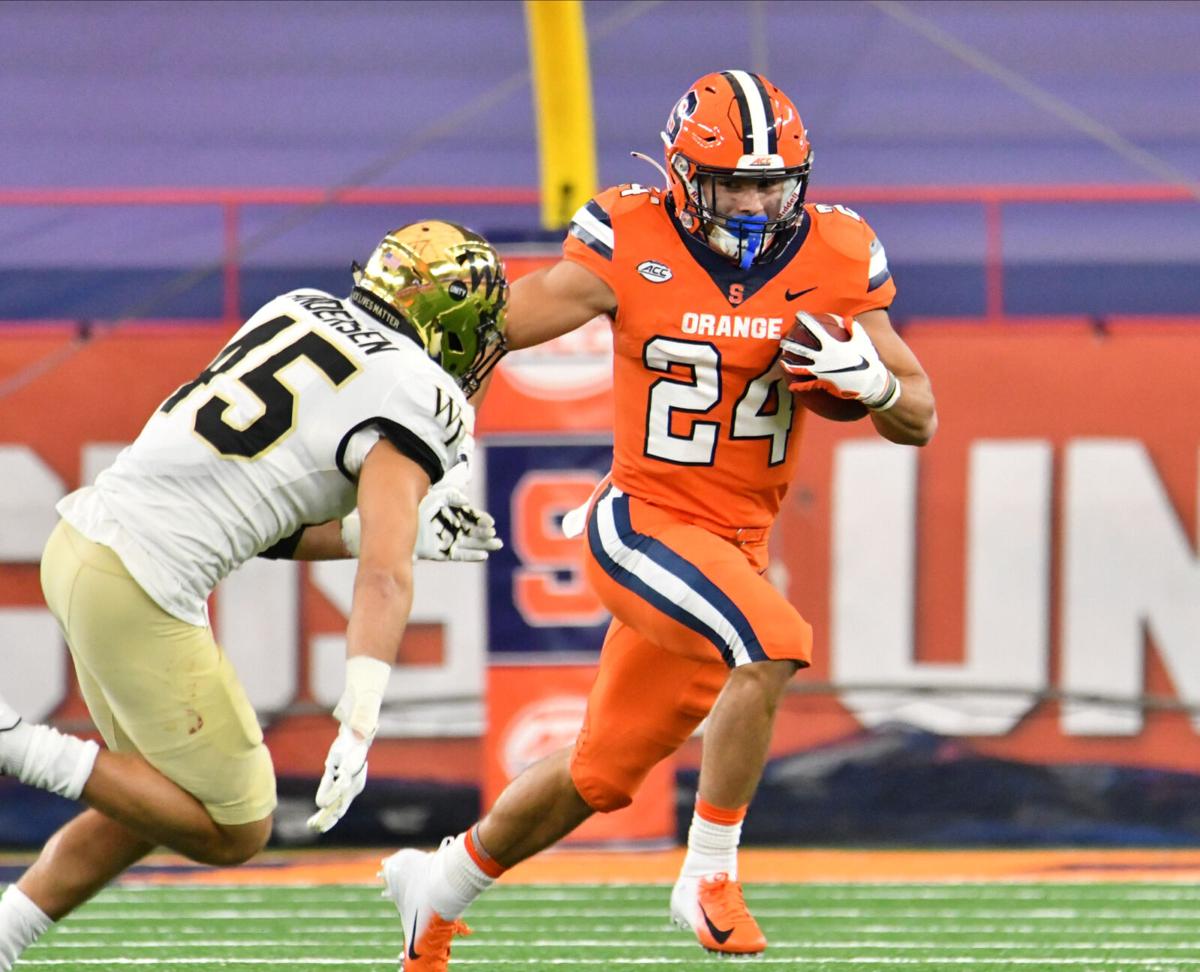 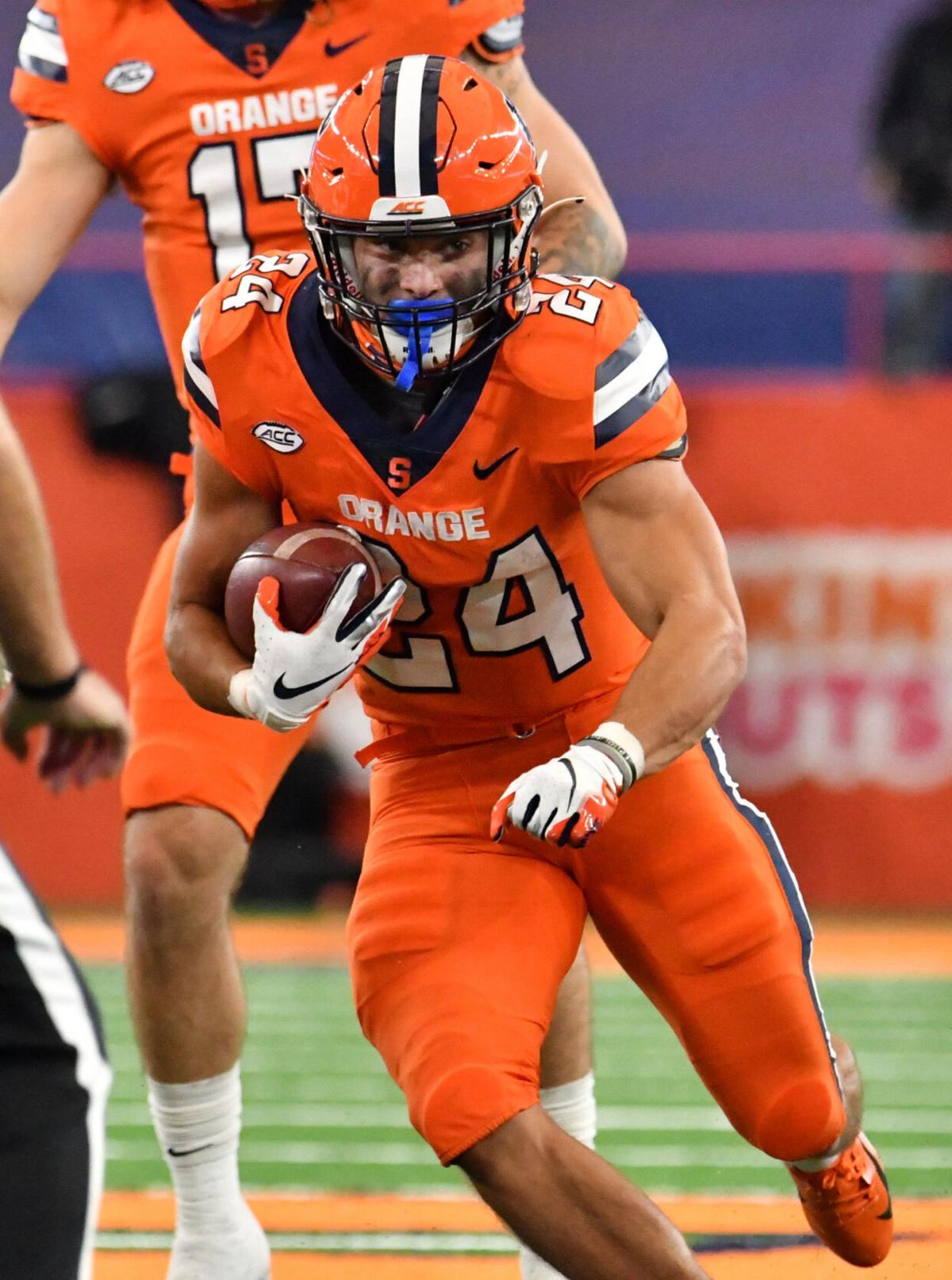 Syracuse running back Cooper Lutz runs through a hole against Wake Forest in the second quarter last Saturday at the Carrier Dome in Syracuse. Mark Konezny/USA TODAY Sports 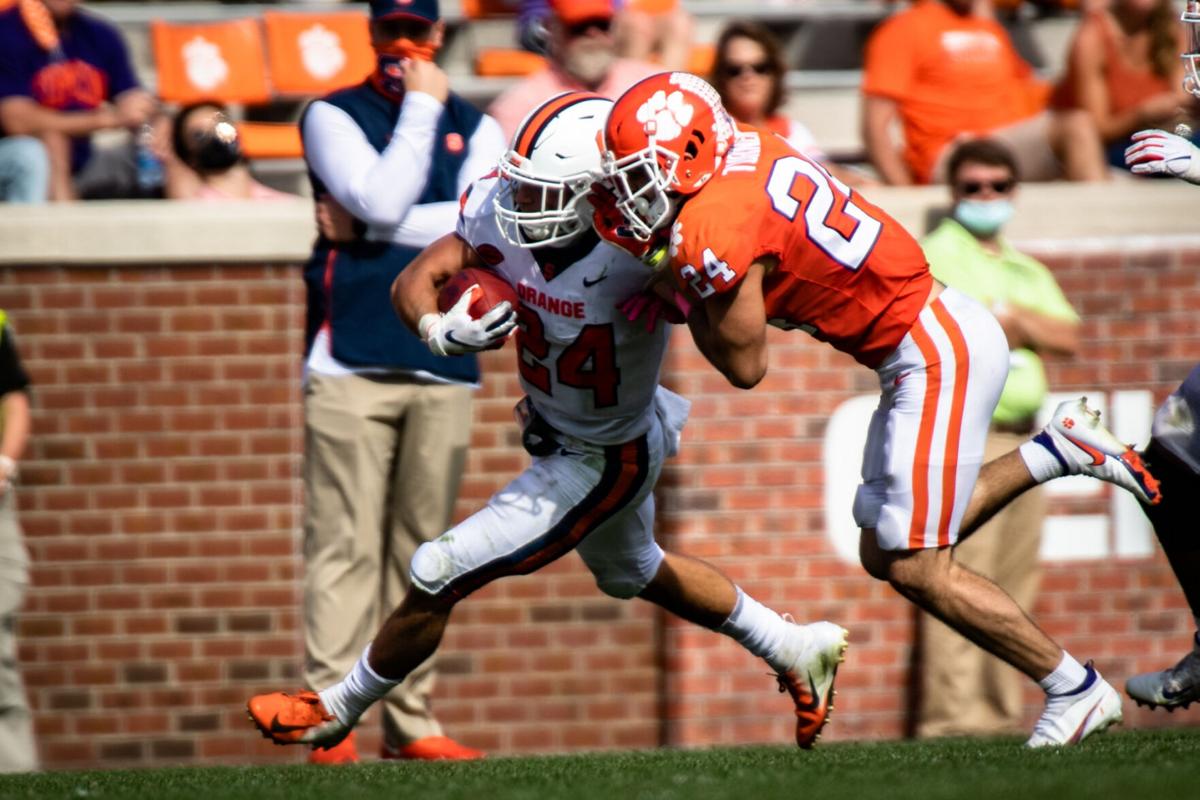 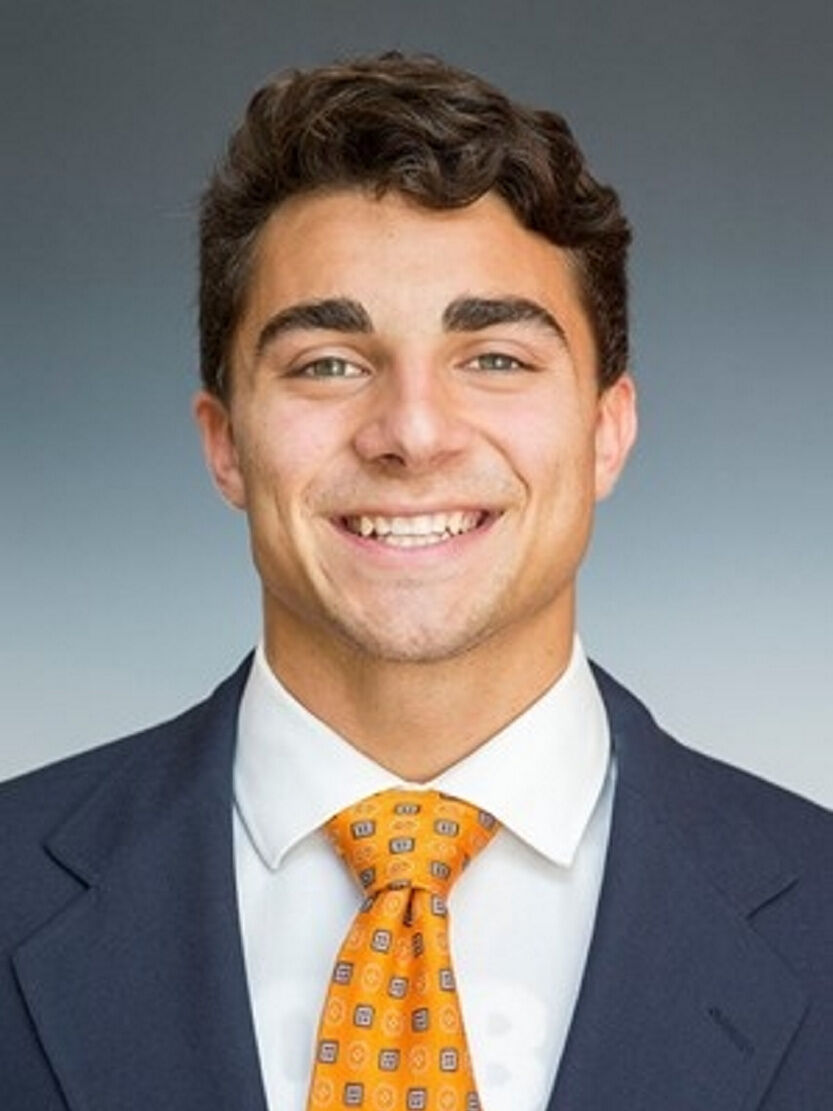 Syracuse running back Cooper Lutz runs through a hole against Wake Forest in the second quarter last Saturday at the Carrier Dome in Syracuse. Mark Konezny/USA TODAY Sports

The unlikely journey from inside receiver to featured running back might only be getting started for Syracuse University football redshirt sophomore Cooper Lutz.

Lutz is coming off a career performance for the Orange (1-6 overall, 1-5 Atlantic Coast Conference) and is seemingly lined up for a committee role moving forward while potentially taking on another heavy workload when SU hosts Boston College at 2 p.m. Saturday in the Carrier Dome.

Lutz finished with 81 rushing yards on 18 carries, adding four catches for 25 yards, to account for nearly half of SU’s offensive production in last Saturday’s 38-14 setback against Wake Forest. He made his first career start in place of freshman Sean Tucker, whose game status is unclear due to a lower-leg injury.

Lutz was a standout running back for Burk Catholic High School in his native Reading, Pa., and was recruited to play inside receiver by SU head coach Dino Babers. He reverted to running back this past spring and entered training camp expecting to be sixth in SU’s backfield pecking order.

“My process of getting on the field has just been a grind mentally, emotionally, physically, getting my body right each day to go out to practice and just knowing that my time was coming, my time was coming, and I just had to work for it,” Lutz said in his first media appearance via Zoom this week.

Lutz had recorded 15 carries for 35 yards and one catch for a loss of four in five appearances before his starting debut. Last week, Lutz finished as the third highest-graded running back by Pro Football Focus College among all Power-Five rushers.

He discovered that incumbent top backs, Abdul Adams and Jarveon Howard, were planning to opt out due to COVID-19 concerns a few days into August training camp. Injuries to freshmen Jawhar Jordan and Tucker have helped to further clear the path, and Lutz leapfrogged redshirt junior Markenzy Pierre on the depth chart along the way.

“What he really showed me (last game) is that it’s not too big for him, I thought he did some really nice things,” Babers said.

Lutz reiterated this week that he committed to the Orange intending to shift to inside receiver for the entirety of his collegiate career. The 6-foot, 201-pound Lutz sat out the 2018 season as a redshirt and did not play in any games as a freshman last year while learning the nuances of the new position. He agreed to make the switch back to his familiar running back spot heading into spring practice this past March, which was shut down after a few sessions at the onset of the coronavirus pandemic.

“I always knew that I didn’t really move like a receiver, and I just feel more natural here at running back,” Lutz said. “When coach Babers asked me to switch I think he knew, and the strength staff knew, that it would be a better spot for me.”

Lutz said he aimed to reset his focus during the offseason and worked on getting stronger to endure the physical punishment between the tackles, and on improving his foot speed and lateral quickness.

Pass protection specifics and other mental adjustments were the biggest challenge in switching back, Lutz said, but he believes his two years of receiver training have made him better prepared to contribute out of the backfield.

“The biggest thing we preach at receiver is run at his nose and step on his toes, influence him either way and then go by, and I’ve taken that to running back to try to make moves on defenders,” Lutz said. “And then just, receiving skills, how you catch balls and where you catch them and how you’re going to make moves after it.”

Lutz has gained confidence in his pass protection and believes he can add a mix of receiving abilities with an aggressive running style that can hold up to contact in the Orange backfield moving forward. He referred to his possible backfield mate, Tucker, as an elite rusher who he learns from watching.

Babers did not update Tucker’s status during his weekly Zoom on Monday but stated that he did not practice last week leading up to his inactive status after going down the previous game against Clemson.

“Sean is a tough guy and he always wants to go, he’s one of those guys you have to keep from going, but we’ll see,” Babers said. “I would imagine there are still going to be some plays out there for Cooper based on what we saw in the Wake Forest game.”

Lutz expressed appreciation for the positive reinforcement he has received from Babers, teammates, and the Orange fan base over the past week, hoping to create more cause for praise over the final four games of the SU season.

“I went through the first two years of this program, and there wasn’t much of that for me,” Lutz said. “But just knowing that people can see me getting better, I can feel myself getting better, and I feel more comfortable out there.”

Former SU football long snapper and team captain Sam Rodgers remained in the race for the 53rd Senate District that was too close to call through Thursday.

The Republican candidate and challenger to Democrat Sen. Rachel May was trailing by less than 200 votes as of Wednesday afternoon, according to CNY Central, and the results are expected to be delayed due to an unusually high number of absentee ballots.

According to the CNY Central report, more than 55,000 absentee ballots were due to be counted in Onondaga County at an expected rate of 10,000 per day.

Rodgers played in every game from 2011-14 for the Orange and has recently worked as an assistant district attorney in Madison County.

As a senior, Rodgers was one of two FBS long snappers to be elected as a team captain. He received the 2015 SU Male Soladay Award for athletic achievement, academics, leadership and service.

The SU football team, meanwhile, moved its regular off day to Tuesday this week to comply with a new NCAA rule prohibiting practices on national election day.

Redshirt junior offensive lineman Dakota Davis was in uniform for the first time this year last Saturday against Wake Forest and saw limited action near the end of the lopsided loss.

Babers stated during his media conference Monday that the plan was to ease Davis back into the mix and he was likely to see an uptick in snaps against Boston College this weekend.

Davis, who was expected to start at guard and help anchor the unit up front, sat out the first six games with an undisclosed injury. The 6-foot-5, 327-pound redshirt junior appeared in 24 games over the previous two seasons and was the first player in program history to garner ACC Offensive Lineman of the Week honors late last season against Duke.