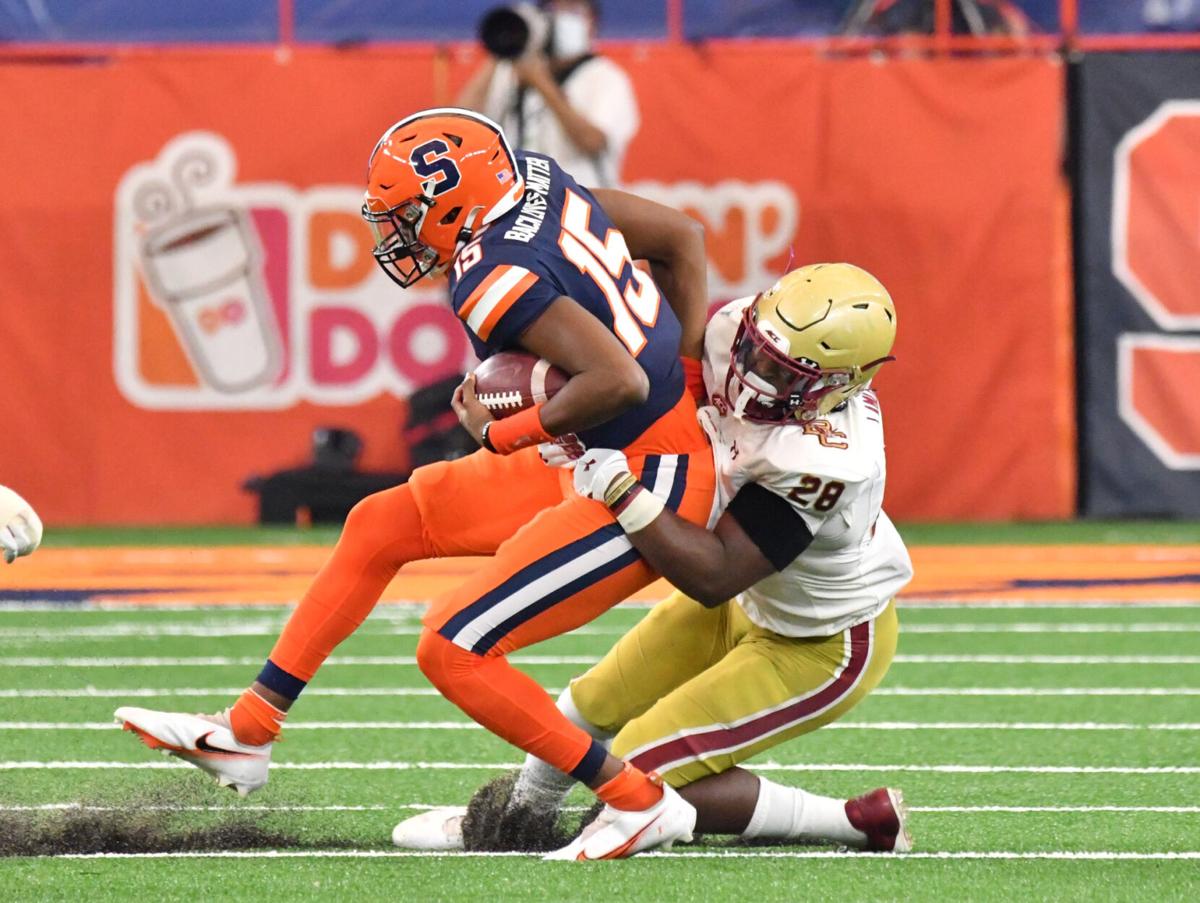 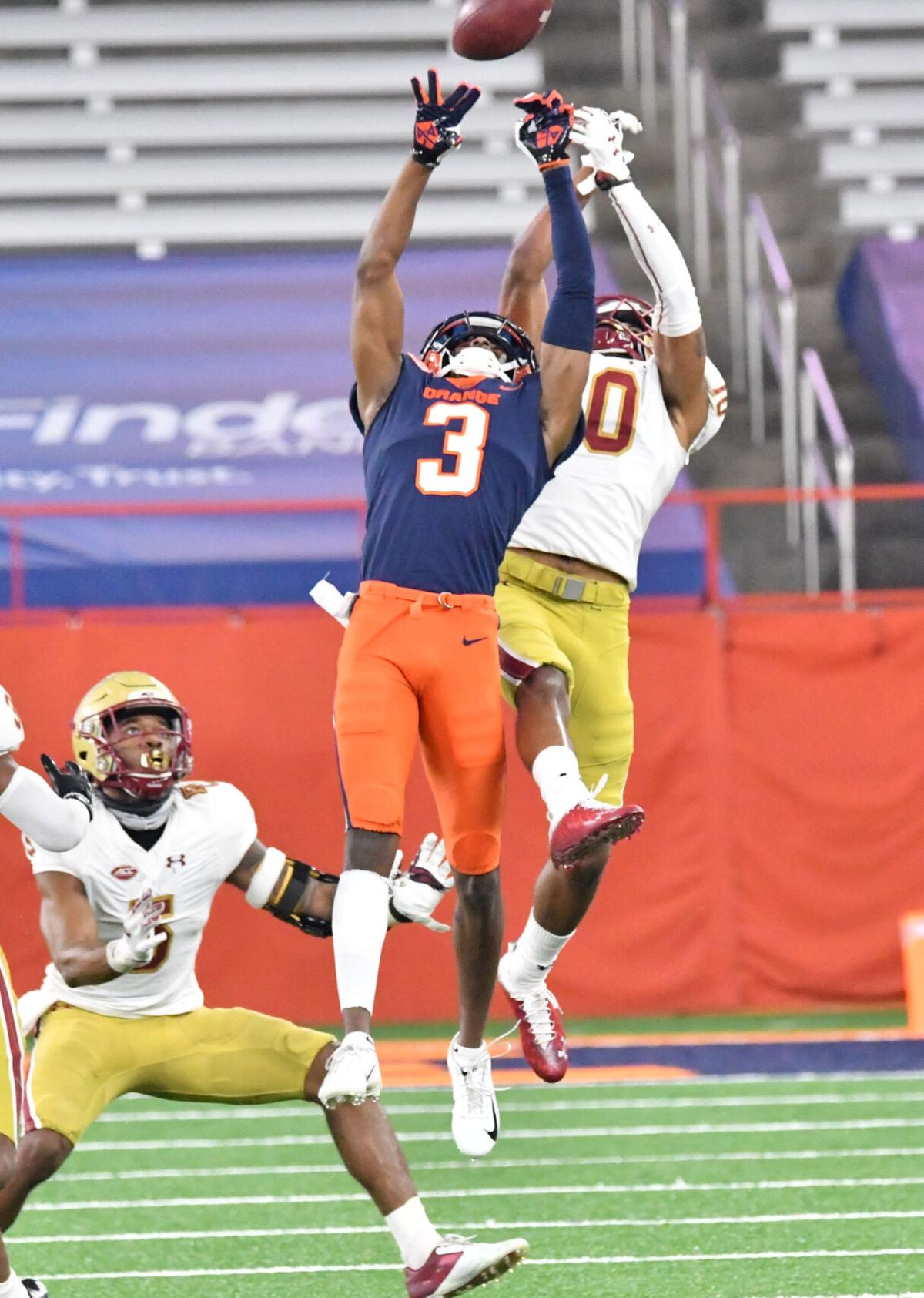 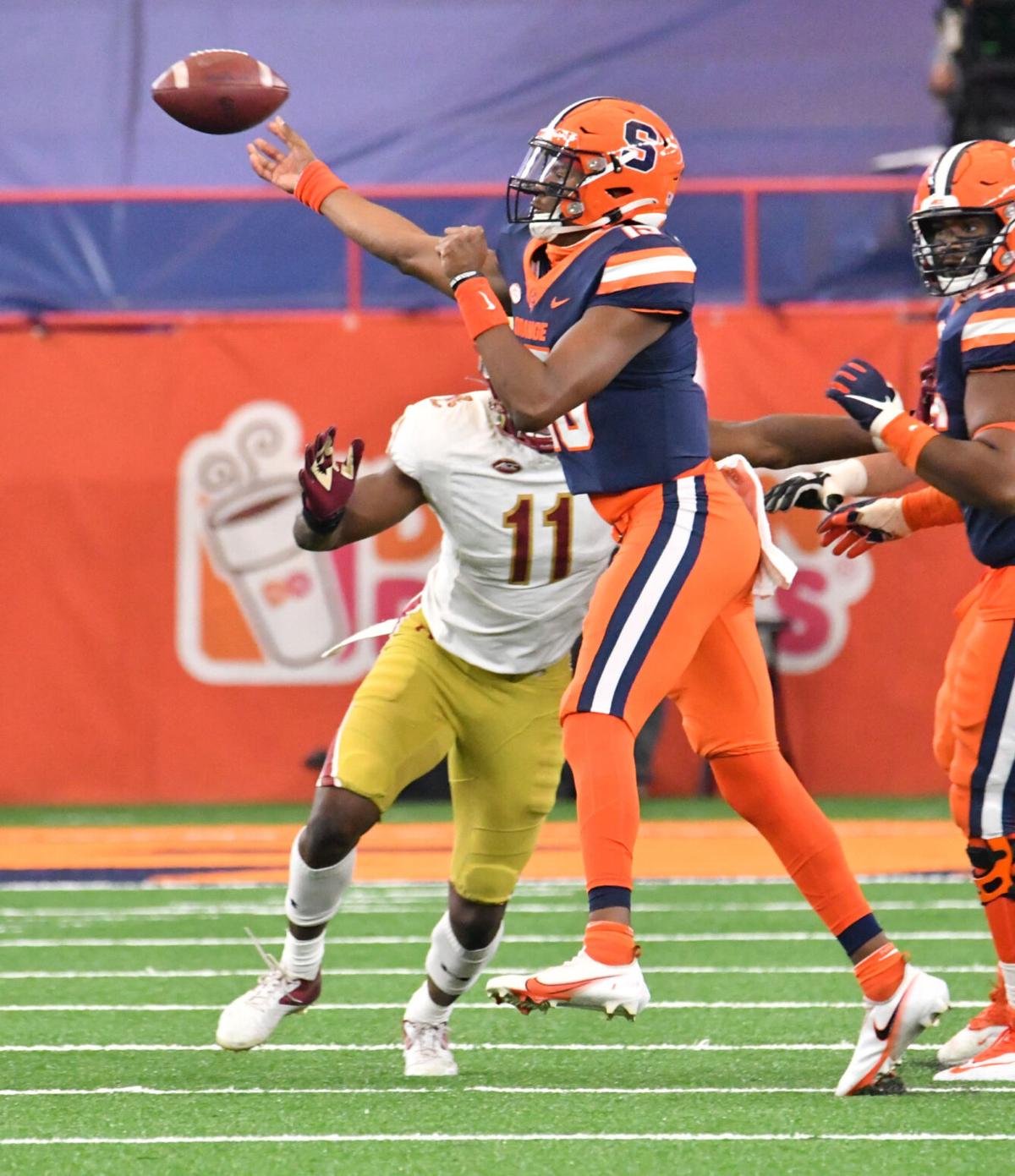 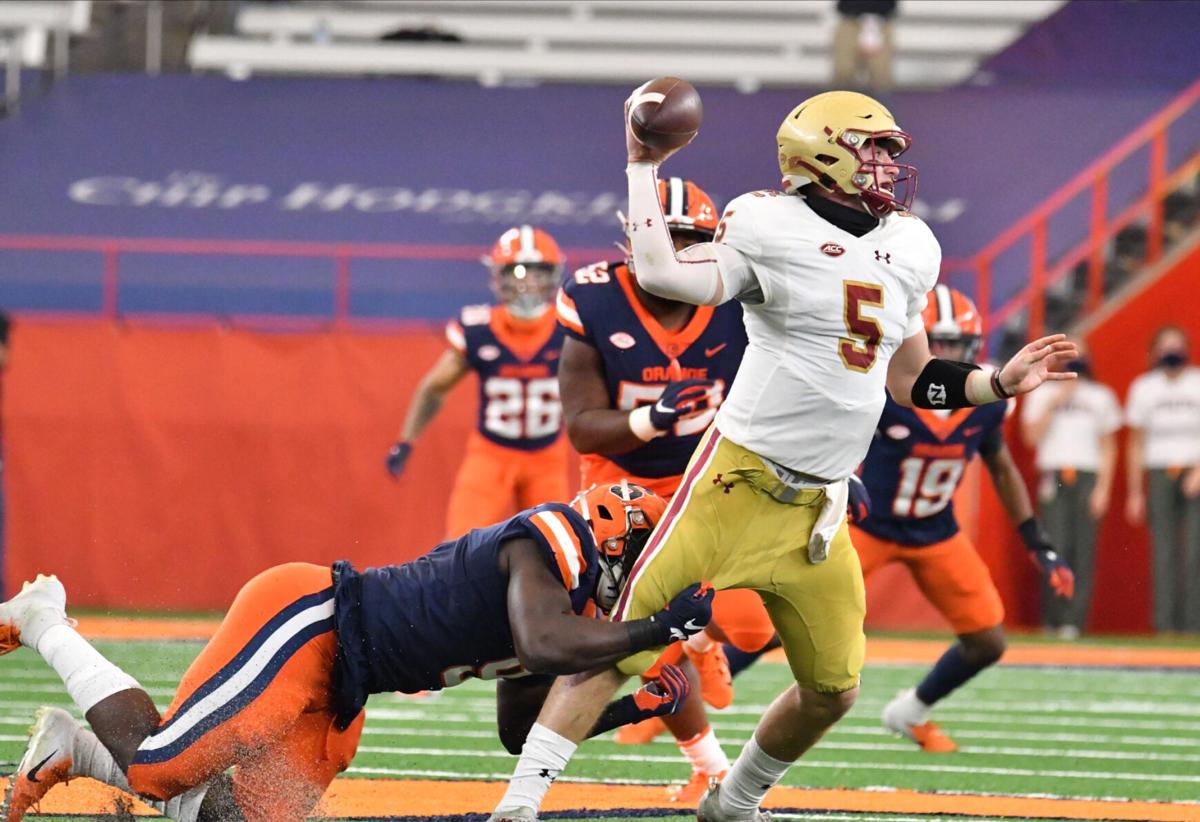 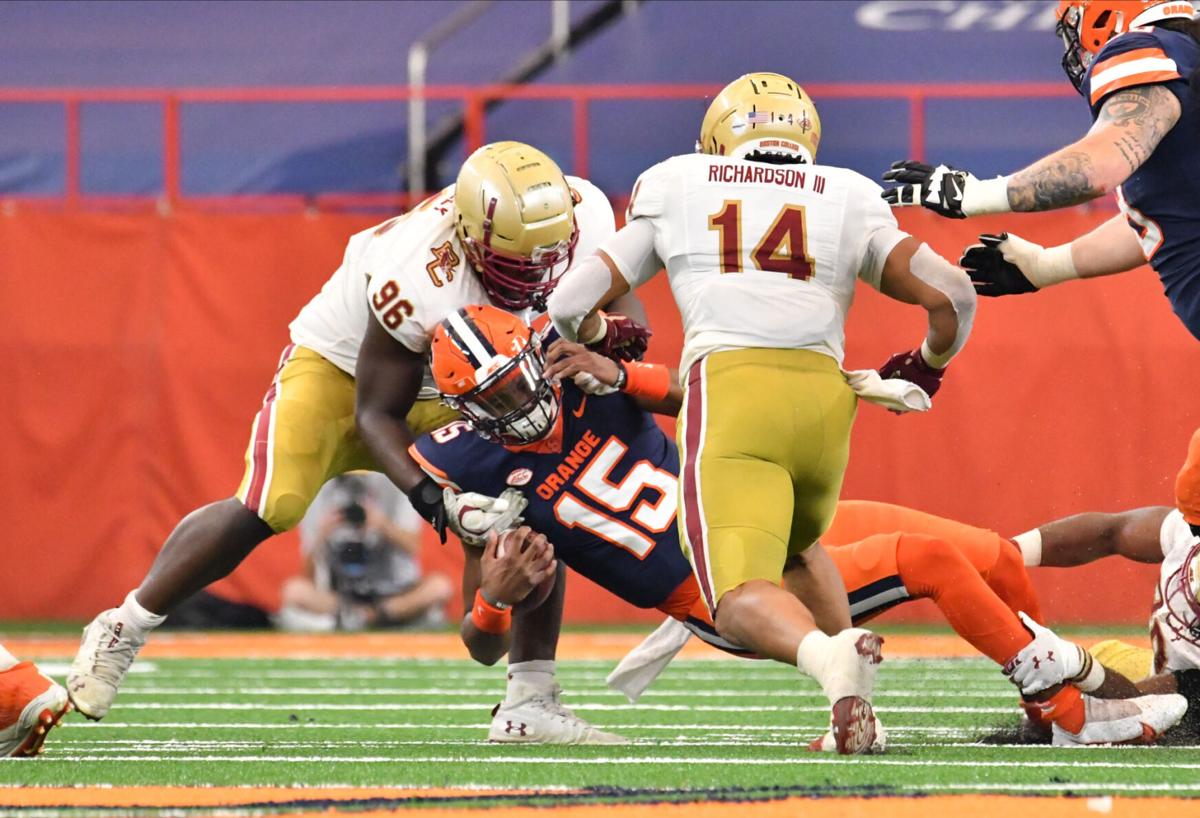 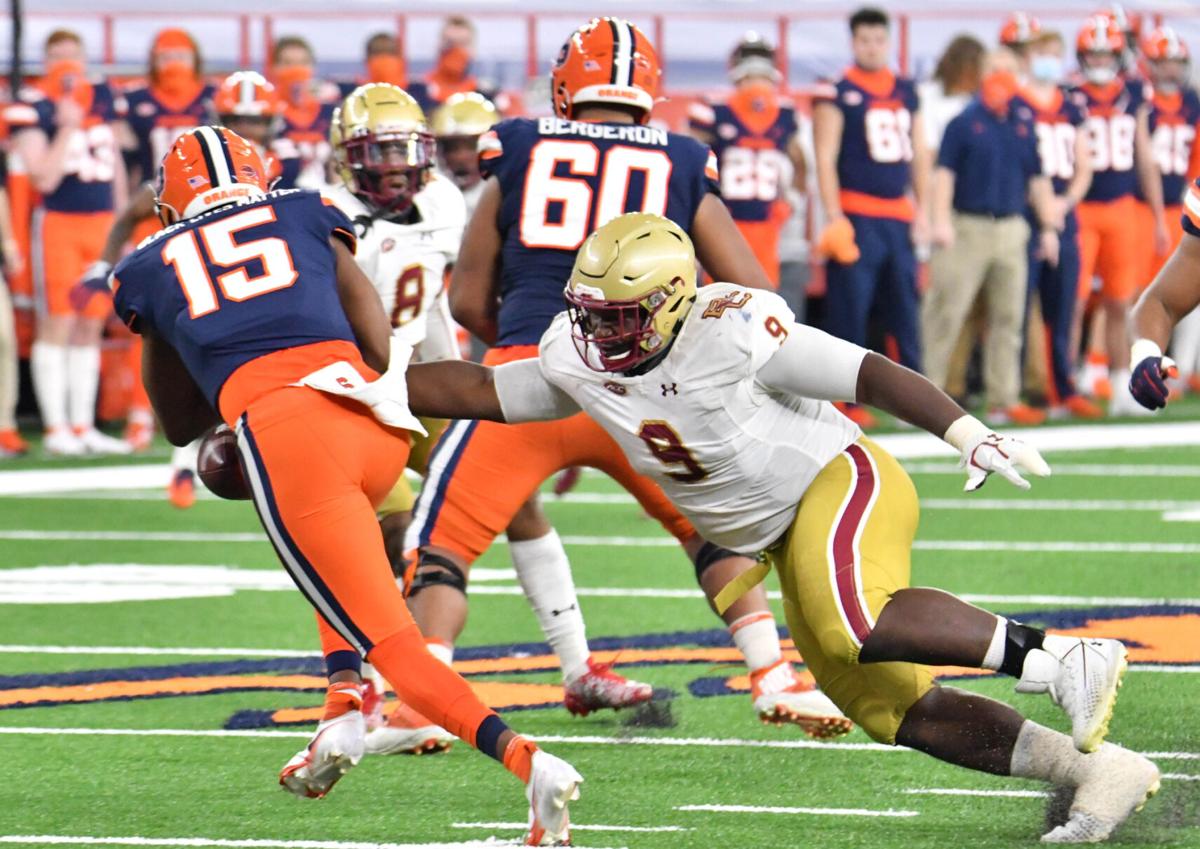 SYRACUSE — The Syracuse University football team was dealt a harsh reminder of its reliance on freshmen at the most crucial moments on Saturday.

Syracuse lost two fourth-quarter turnovers to thwart its comeback chances after making key defensive stops, and Boston College seized advantage to capture a 16-13 Atlantic Coast Conference victory in the Carrier Dome with no fans in attendance due to state COVID-19 mandates.

The consistently short-handed Orange (1-7 overall, 1-6 ACC) lost its fifth straight game entering the bye week. Syracuse will next play a Friday game at Louisville at 7 p.m. on Nov. 20 to be televised on ESPN.

True freshman JaCobian Morgan made his first career start at quarterback for SU in place of redshirt senior, Rex Culpepper, who sat out with an undisclosed injury that was not reported during the week.

Morgan impressed in stretches but threw a costly fourth-quarter interception, which was followed on the next possession by a gut-wrenching lost fumble from classmate, Sean Tucker, who made his return to start at running back after a one-game absence due to a lower leg injury.

“That locker room, we’re all messed up, no one likes losing, but the effort was a good effort,” SU coach Dino Babers said. “When you put an effort out like that and you don’t win, it’s damaging, it hurts you. But if you’re going to win those types of games, you can’t have the penalties, you can’t have the turnovers, it’s those things you don’t think is really big until the game is over.”

Syracuse trailed Boston College, 13-6, when its defense came through by stopping a quarterback sneak on 3rd-and-1 to force a punt with 10 minutes left.

Morgan was sacked twice on the ensuing drive before throwing an interception, but the SU defense again shined by forcing a punt after a three-and-out, including another short-yardage stop on 3rd-and-1.

“The mentality on the defense was just to not give them anything easy, and bend but don’t break, because it’s not over until we say it’s over,” said SU redshirt freshman cornerback Garrett Williams.

On the first play of SU’s next possession, which began on its own 20 with six minutes and 40 seconds remaining, Tucker fumbled approaching a defender after the handoff. The Eagles recovered and Aaron Boumerhi eventually booted a 17-yard field goal to help Boston College claim a 16-6 edge with 2:05 left.

Morgan led a desperate 75-yard scoring drive in the final minute and found Aaron Hackett for a one-yard touchdown lob to the back of the end zone, trimming SU’s deficit to 16-13 following the extra point by Andre Szmyt with 21 seconds left.

Szmyt’s onside kick attempt that followed sputtered across the field before rolling out of bounds, and Boston College ran out the clock to improve to 5-3 overall and 4-3 in the ACC.

Morgan completed 19 of 30 passes for 188 yards, providing a spark for the offense that showed brief flashes of the up-tempo rhythm it has rarely displayed this year. Junior wide receiver Taj Harris supplied 61 yards on seven catches, while Tucker added 11 carries for 52 yards in his return.

Boston College scored just one touchdown on five chances in the red zone but was able to control the ball with its run game. David Bailey tallied 125 yards on 25 carries to lead the Eagles, who finished with 191 net rushing yards on 47 team attempts.

Boston College gained 13 of its 20 first downs via the ground and dominated time of possession at 38:49. The Eagles finished with a 10-for-19 rate on 3rd-down conversions while SU was just 3-for-11.

For Syracuse it was a continuation of its season-long struggles to sustain drives, regardless of who is under center. The Orange is just 26-for-109 on 3rd-down attempts for the season (.238 percent) and has yet to convert more than five total or post a success rate above .333 in a single game this year.

“I really believe if we can find a way to bust this dam from an offensive standpoint, to shake a little bit and get the ball moving, and get third downs up,” Babers said. “If you can get somewhere around 42-44 percent on third downs, then you’re getting enough plays and you’re keeping your defense fresh that maybe they can make a play for you somewhere down the road.”

Boston College quarterback Phil Jurkovec, who entered as the ACC’s leading passer, finished 20-for-29 with 208 yards and a touchdown. He found Zay Flowers for a 20-yard touchdown pass with 24 seconds left in the second quarter to give the Eagles a 10-3 edge at halftime.