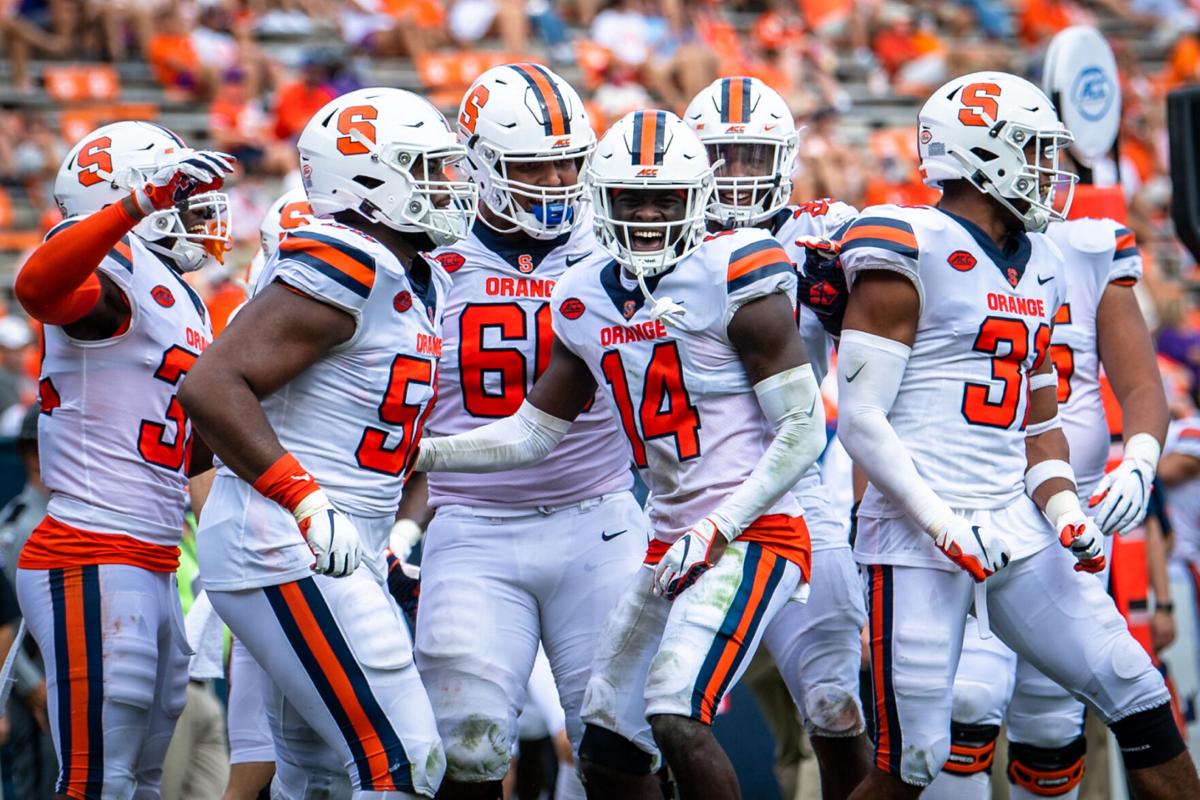 Syracuse defensive back Garrett Williams celebrates with his teammates after intercepting a pass during their game against Clemson last Saturday at Memorial Stadium in Clemson, S.C. Ken Ruinard/USA TODAY Sports 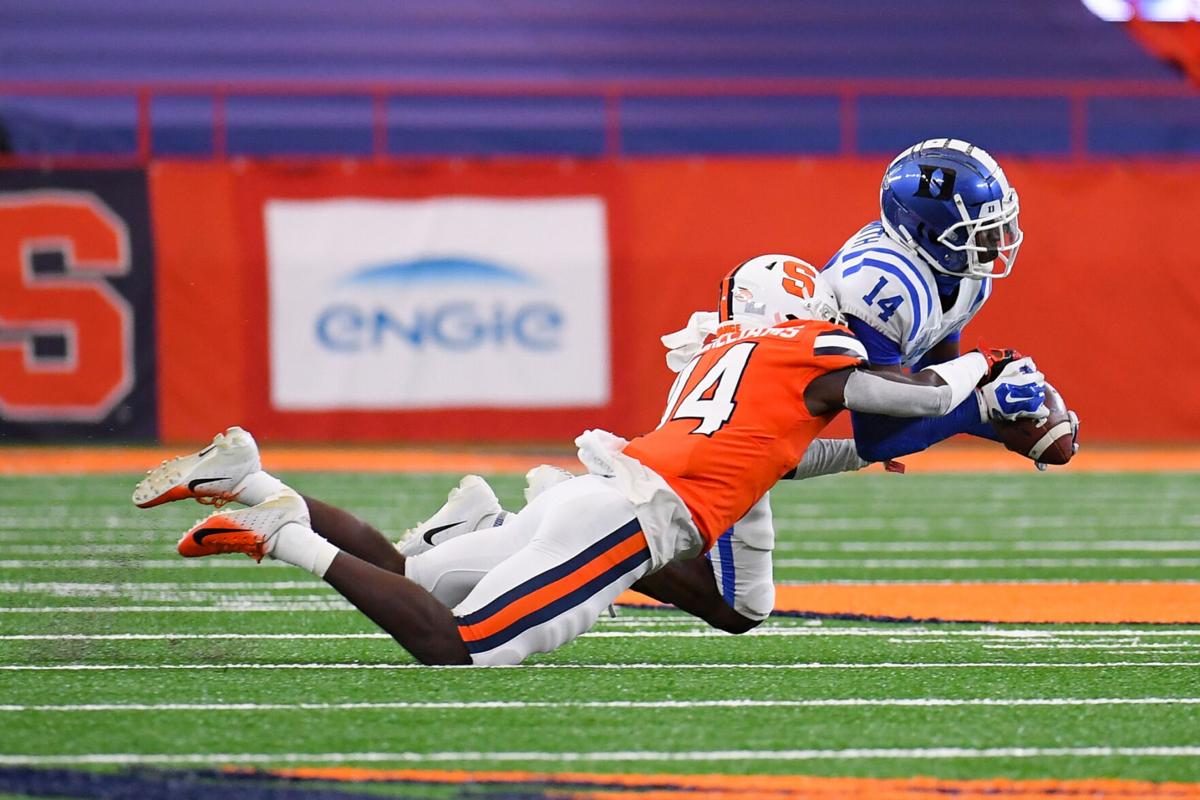 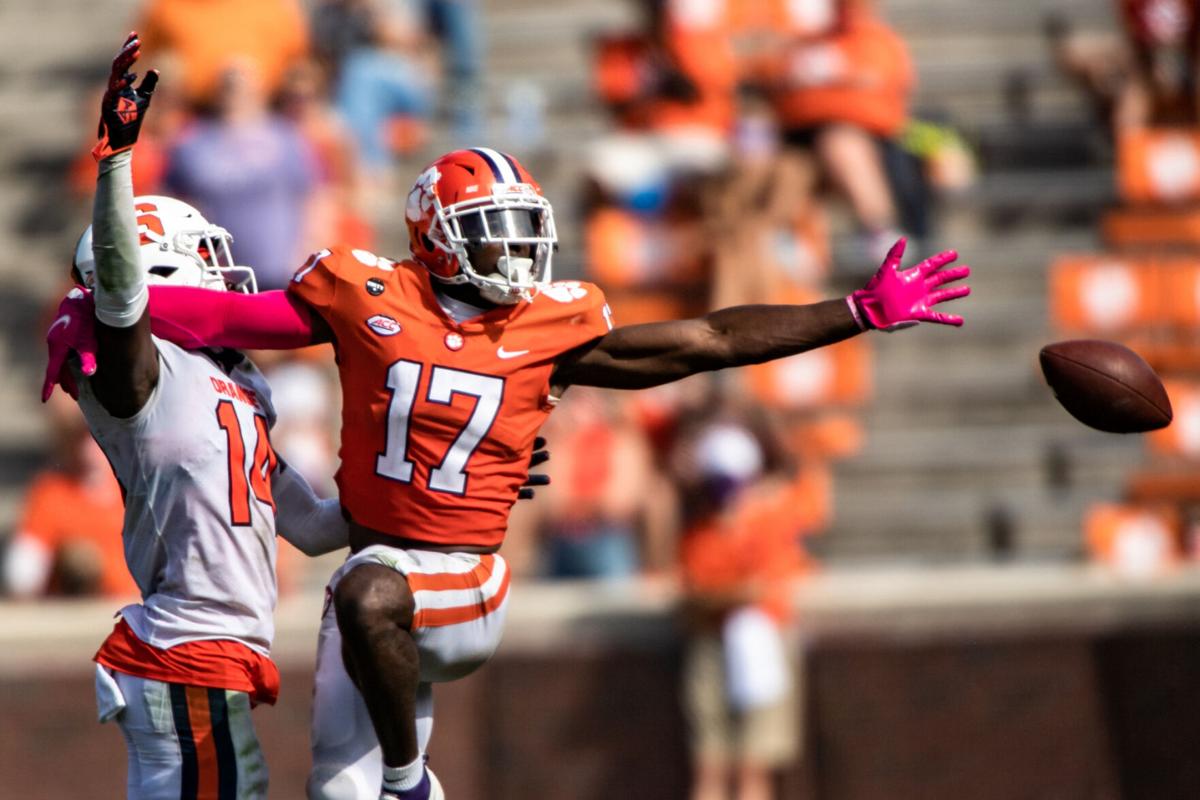 A pass intended for Clemson wide receiver Cornell Powell, right, falls out of reach as Syracuse defensive back Garrett Williams, left, defends in the second half at Memorial Stadium in Clemson, S.C. Ken Ruinard/USA TODAY Sports 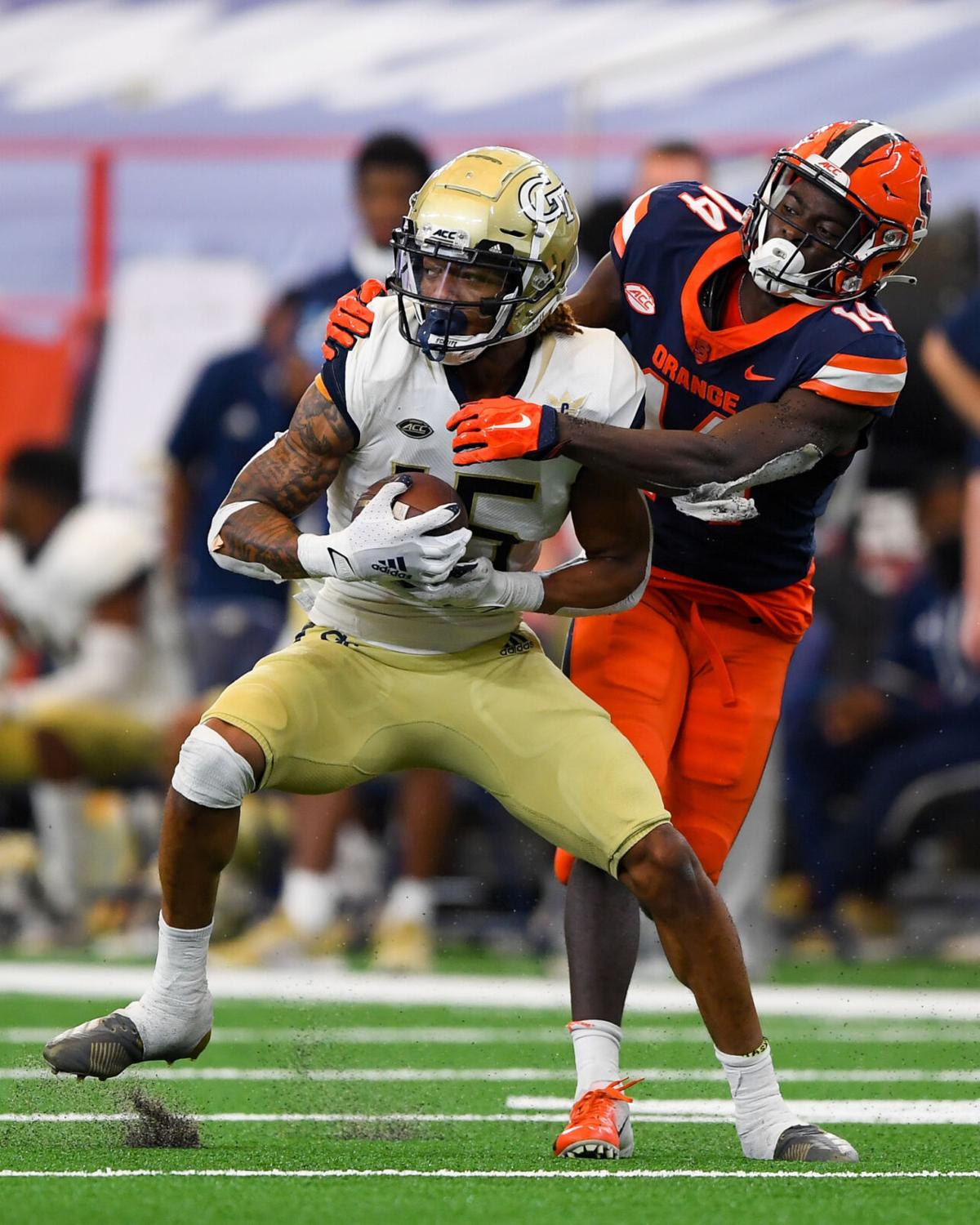 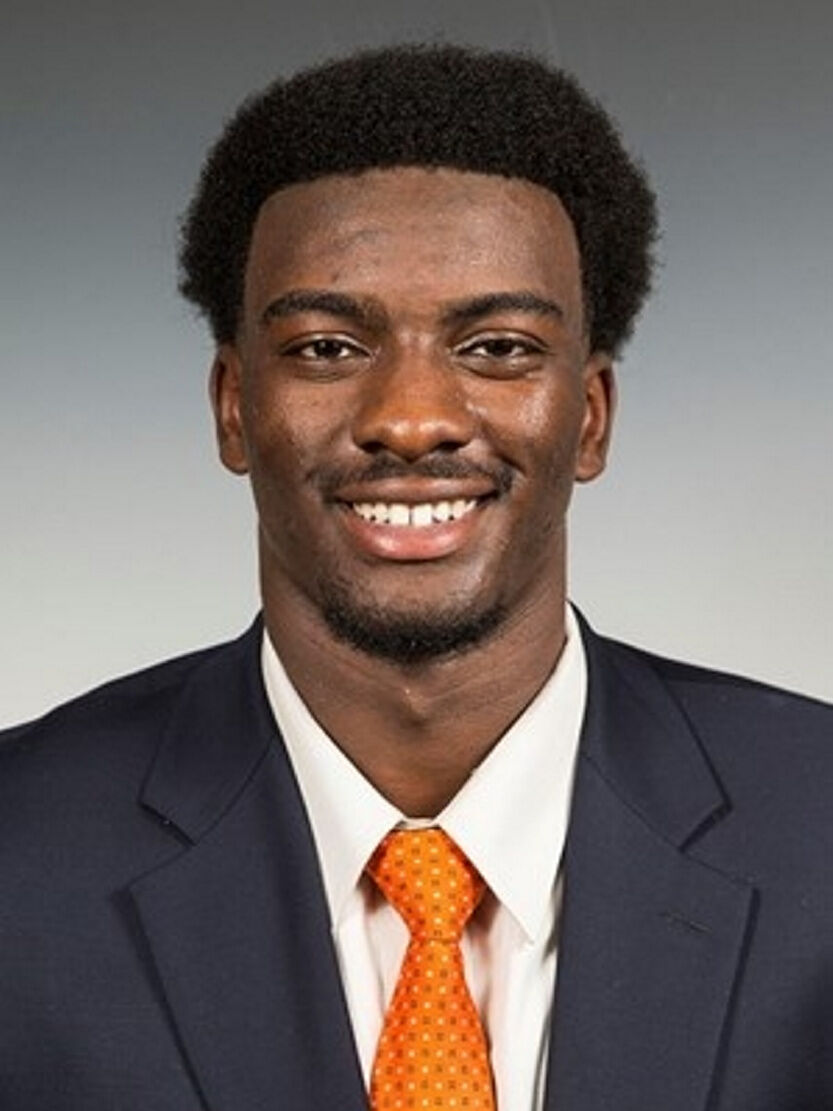 Syracuse defensive back Garrett Williams celebrates with his teammates after intercepting a pass during their game against Clemson last Saturday at Memorial Stadium in Clemson, S.C. Ken Ruinard/USA TODAY Sports

A pass intended for Clemson wide receiver Cornell Powell, right, falls out of reach as Syracuse defensive back Garrett Williams, left, defends in the second half at Memorial Stadium in Clemson, S.C. Ken Ruinard/USA TODAY Sports

Garrett Williams approached training camp like a surefire starter for the Syracuse University football team and made good on his father’s seemingly bold preseason prediction to coach Dino Babers.

Williams — the 5-foot-11, 184-pound cornerback from Harrisburg, N.C. — has started every game as a redshirt freshman to help turn the SU secondary into one of the most productive units in the nation.

Williams leads the FBS with 38 targets without allowing a touchdown to an opposing receiver, according to Pro Football Focus College, and paces the Orange (1-5 overall, 1-4 Atlantic Coast Conference) with five pass breakups entering a noon game Saturday against Wake Forest (3-2, 2-2) in the Carrier Dome.

During his weekly media Zoom conference, Babers referred to a preseason conversation with Williams’ father in which he predicted that his son would work his way into the SU starting lineup for the season opener.

Williams has helped to elevate the Orange secondary despite the absence of All-American junior safety Andre Cisco, who opted out and declared for the 2021 NFL draft due to a season-ending injury after two games.

The Orange enters the week ranked third nationally in passes defended with an average of 5.3 per game. Williams’ fellow starting cornerback, redshirt junior Ifeatu Melifonwu, has been targeted 33 times without surrendering a score to an opposing pass-catcher, which ranks second nationally behind Williams, according to PFF College data.

Williams impressed coaches and teammates with a strong training camp performance that has carried into the season. He initially opened the summer as projected depth among the defensive backs.

“I knew early on that I was going to be part of the mix because I knew how hard I had worked leading into it,” Williams said. “I didn’t know if I’d be starting or not, but I knew I’d leave them no choice but to have me in the game in some capacity.”

The surging redshirt freshman came through with his best performance in last Saturday’s 47-21 setback against top-ranked Clemson. Williams led SU with eight tackles and hauled in his first career interception, picking off the presumptive top pick in the 2021 NFL draft, Tigers quarterback Trevor Lawrence.

Williams returned the interception 39 yards for a touchdown, which trimmed Clemson’s edge to 24-14 late in the first half. He became the first player to record a pick-six off Lawrence in his prolific college career.

“Honestly just a lot of extra film, doing the little things to make sure that I feel prepared so when it comes to Saturday, I don’t feel nervous, I feel confident in what I can do,” Williams said.

Williams was thrown toward eight times against the Tigers to extend his streak of preventing touchdowns. He came through with another game-changing play when star wide receiver Amari Rodgers appeared to catch a long pass to set Clemson up near the end zone, but Williams ripped the ball loose from the NFL prospect’s hands as they went to the ground to eliminate the big first-half reception.

“He’s playing fantastic football for us, another young guy that has an opportunity to be here for us another four years and we’re really excited about it,” Babers said.

Williams ranks third on the Orange with 34 tackles and his 27 solo stops is the second most on the team.

Williams, who seized his opportunity during the summer, is now one of many young players being called upon to contribute through a plethora of injuries.

Ja’Had Carter, Rob Hanna, and Aman Greenwood are also freshmen in the secondary that have been among SU’s 14 first-time starters this season. The group has mostly outperformed expectations in the back of defensive coordinator Tony White’s 3-3-5 scheme alongside veteran cornerstones — Melifonwu and redshirt junior Trill Williams. SU leads the nation with 17 takeaways and ranks second with nine interceptions.

One of SU’s young defensive backs, redshirt freshman Neil Nunn, will miss the rest of the season with a torn ACL, according to multiple reports unconfirmed by the team.

Williams believes the rookies thrust into action are gaining invaluable experience that could ultimately pay off for another four years for SU due to NCAA players maintaining current eligibility after this season.

“I feel like everybody out there has deserved an opportunity to play, regardless of if it’s by accident or just earning it, so I think when all of us young players are in, we’re confident in what we can do and we don’t see any drop-off between us and the next guy,” Williams said.

“Even though this season technically doesn’t count (toward eligibility), all the reps and things we’re doing in games count for us,” he added. “Each game, we’re going to keep getting better and better, and I think we’re seeing that as the season goes on. The confidence is going up, everything is going in the right direction.”

The status of SU freshman running back Sean Tucker is unclear for Saturday following a lower-leg injury suffered last week against Clemson.

Babers did not have an update during his lone media appearance via zoom this week. Tucker was listed as the starter on the two-deep depth chart for Saturday, though that is always subject to change.

Tucker took 10 carries for 63 yards and a touchdown before leaving for good in the first half. His backups, Cooper Lutz and Markenzy Pierre, combined for 31 rushing yards on 19 attempts afterward. Tucker has averaged 72 rushing yards per game and 5.1 yards on 71 carries overall while seizing lead duties in the SU backfield.

The Orange has been without expected starter Jawhar Jordan the past three games due to a leg injury while its top two rushers entering the season — Abdul Adams and Jarveon Howard — each opted out in the preseason due to COVID-19 concerns.

The Syracuse-Boston College game slated for Nov. 7 will kick off at 2 p.m. in the Carrier Dome. The ACC announced game times for all Nov. 6-7 matchups earlier this week.

The Orange leads the all-time series against the Eagles, 32-21, in the rivalry that started in 1924.