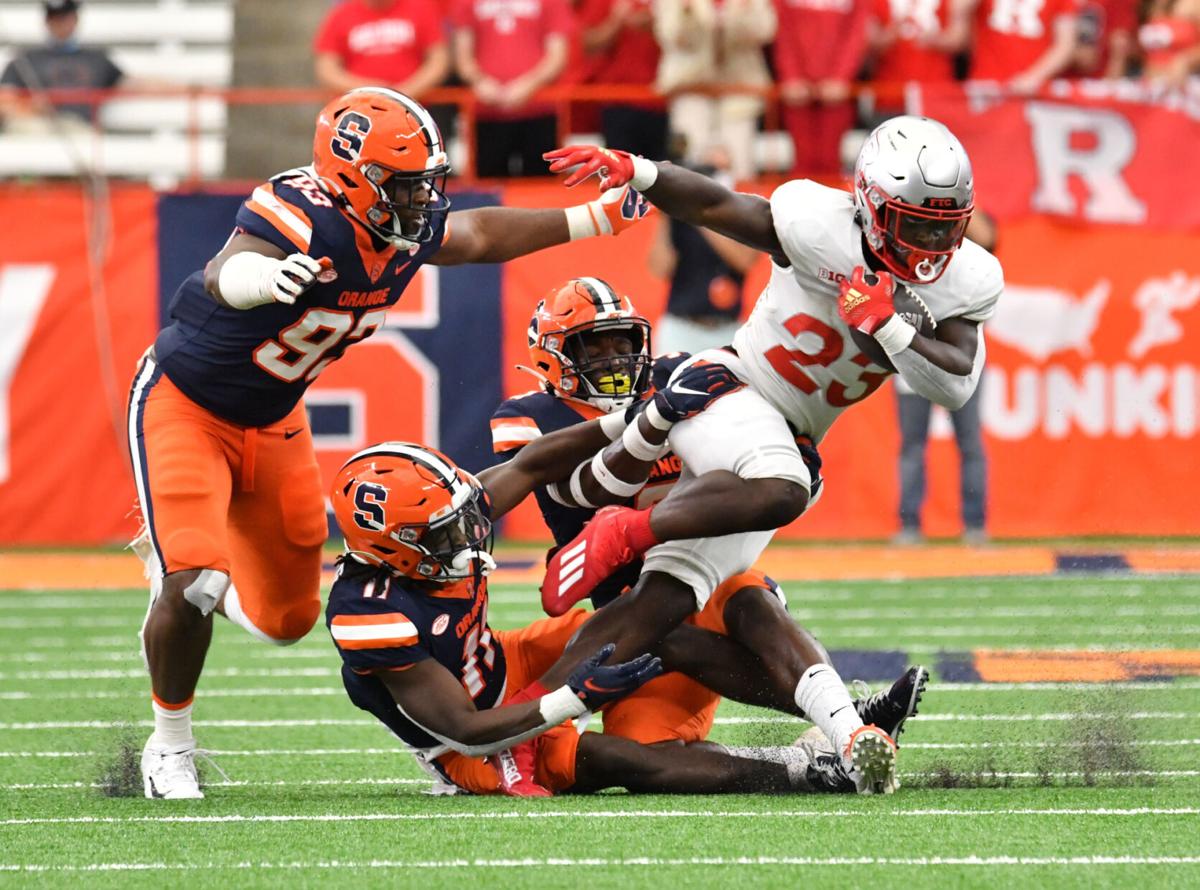 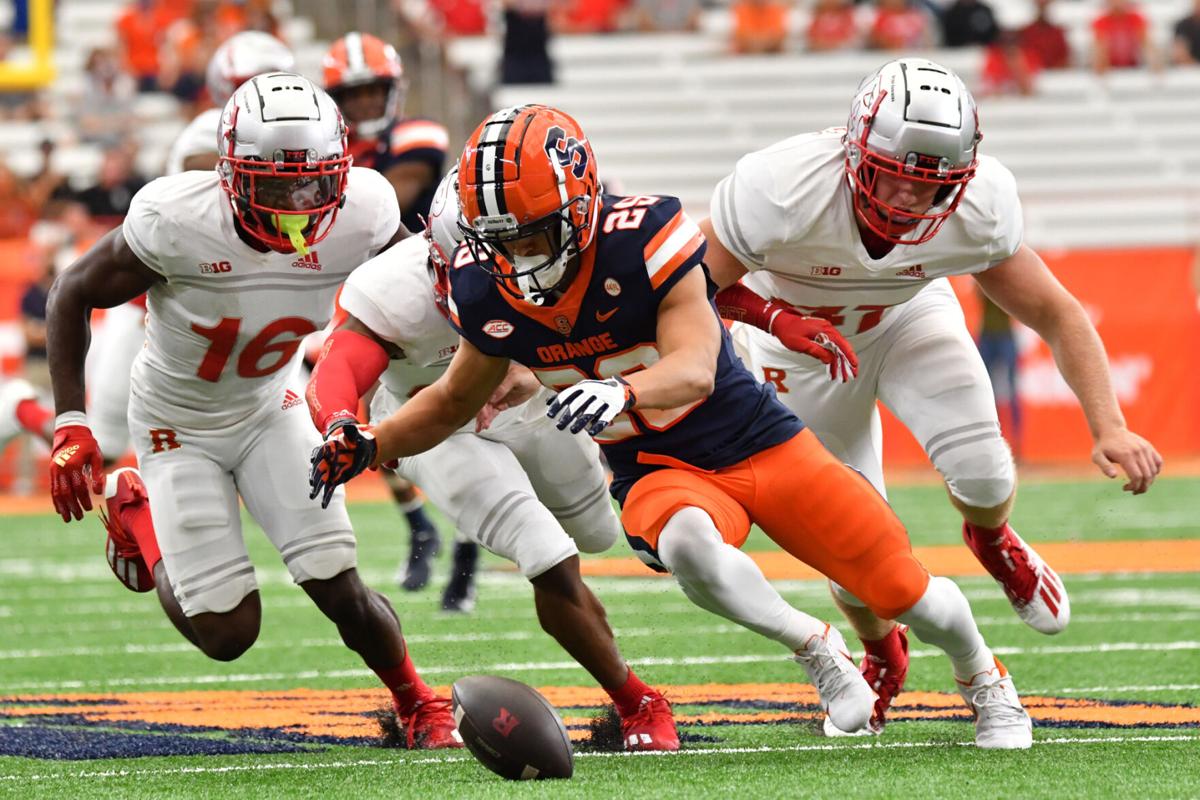 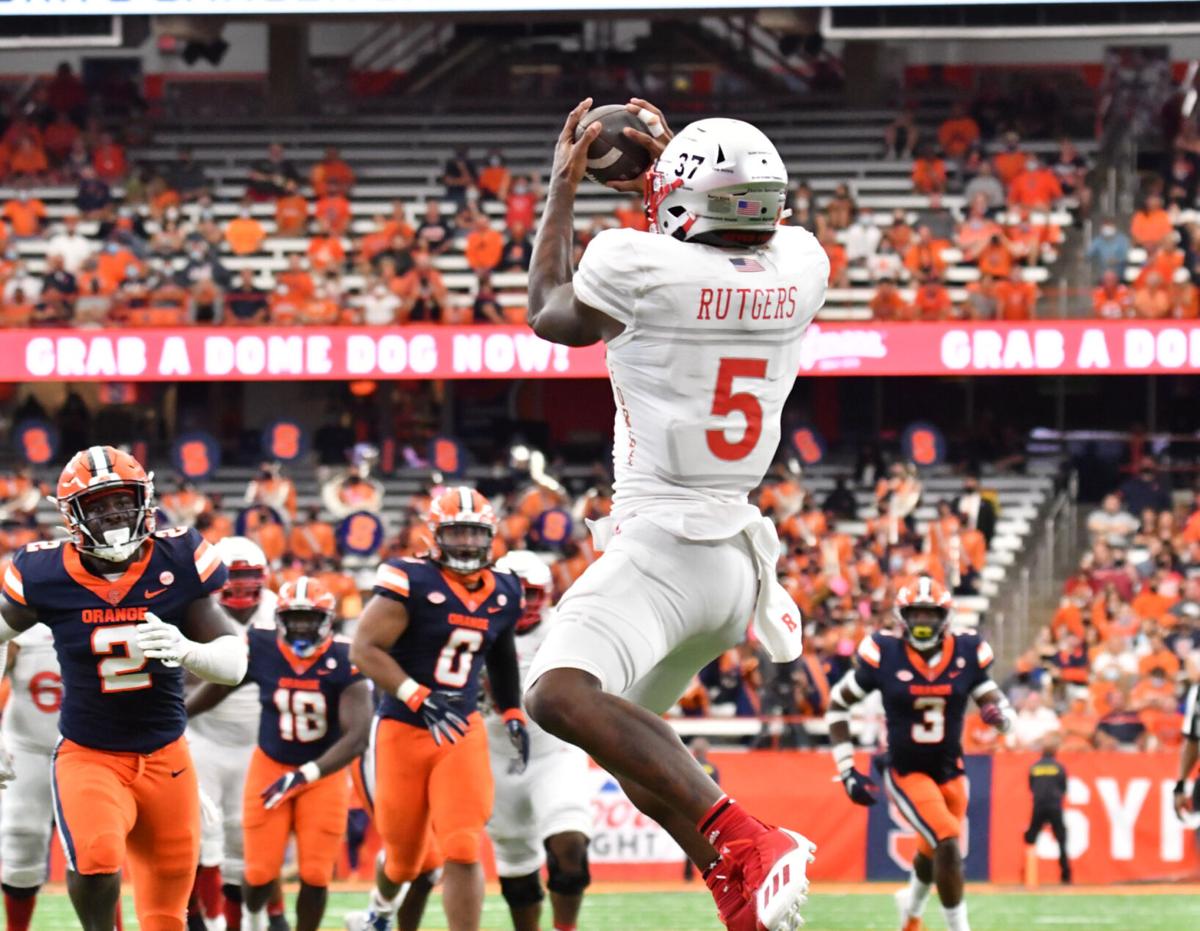 Rutgers’ Jovani Haskins catches a pass for a touchdown during the third quarter against Syracuse on Saturday at the Carrier Dome. Mark Konezny/USA TODAY Sports 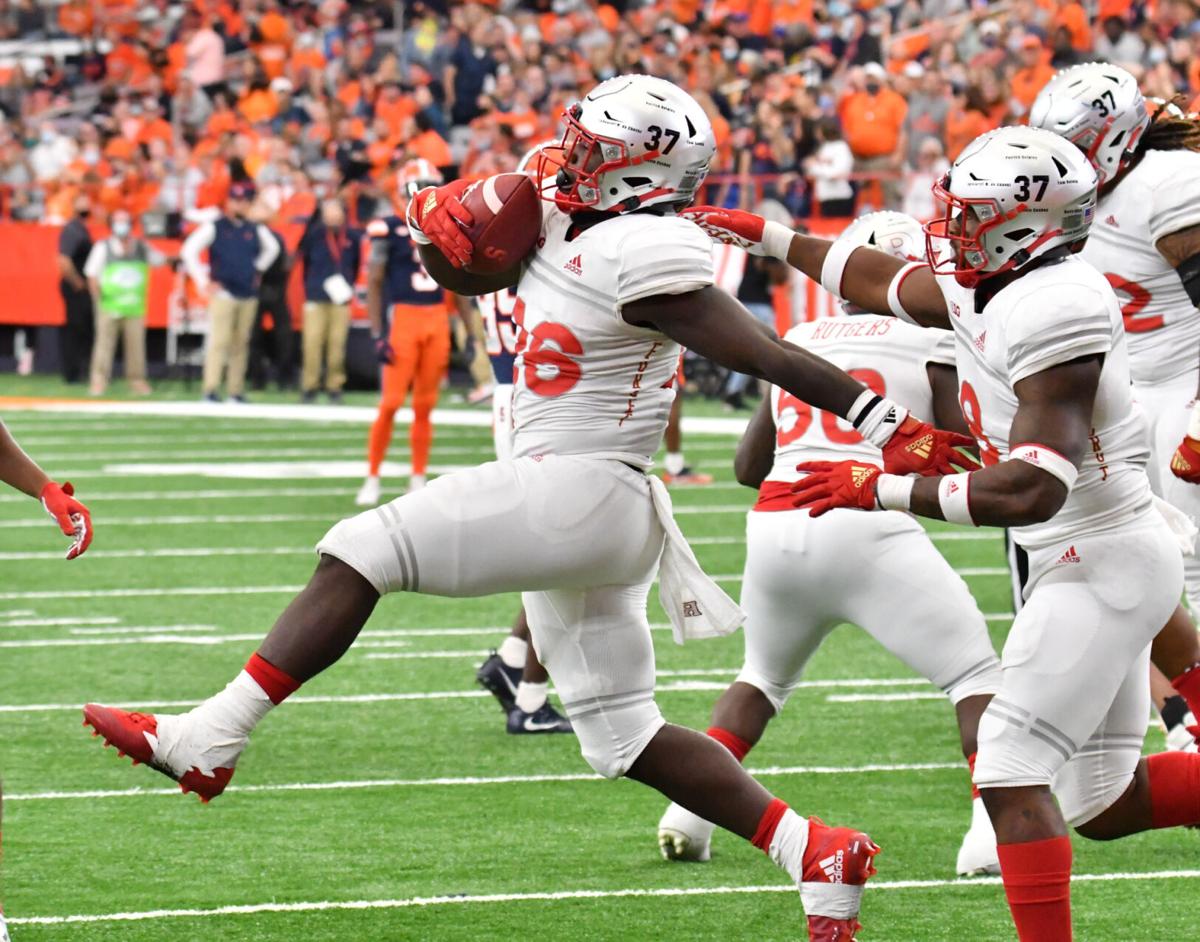 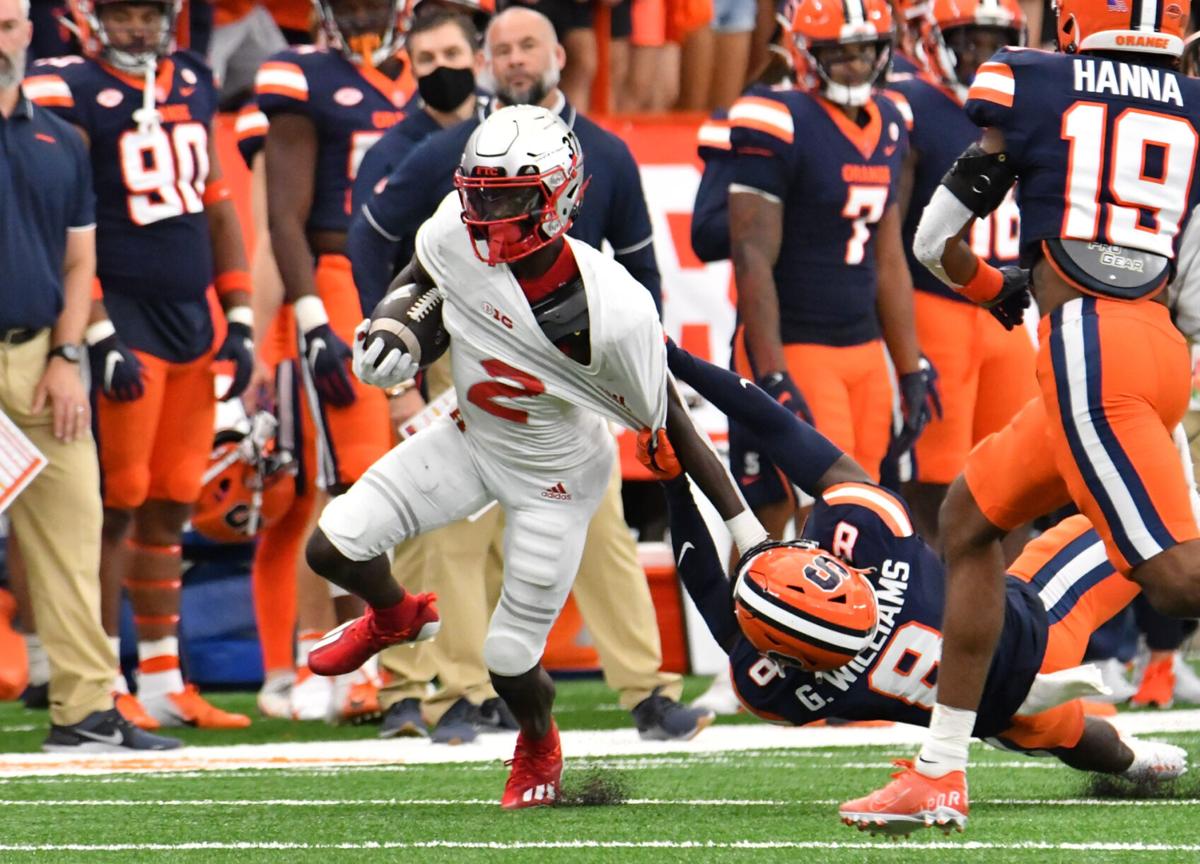 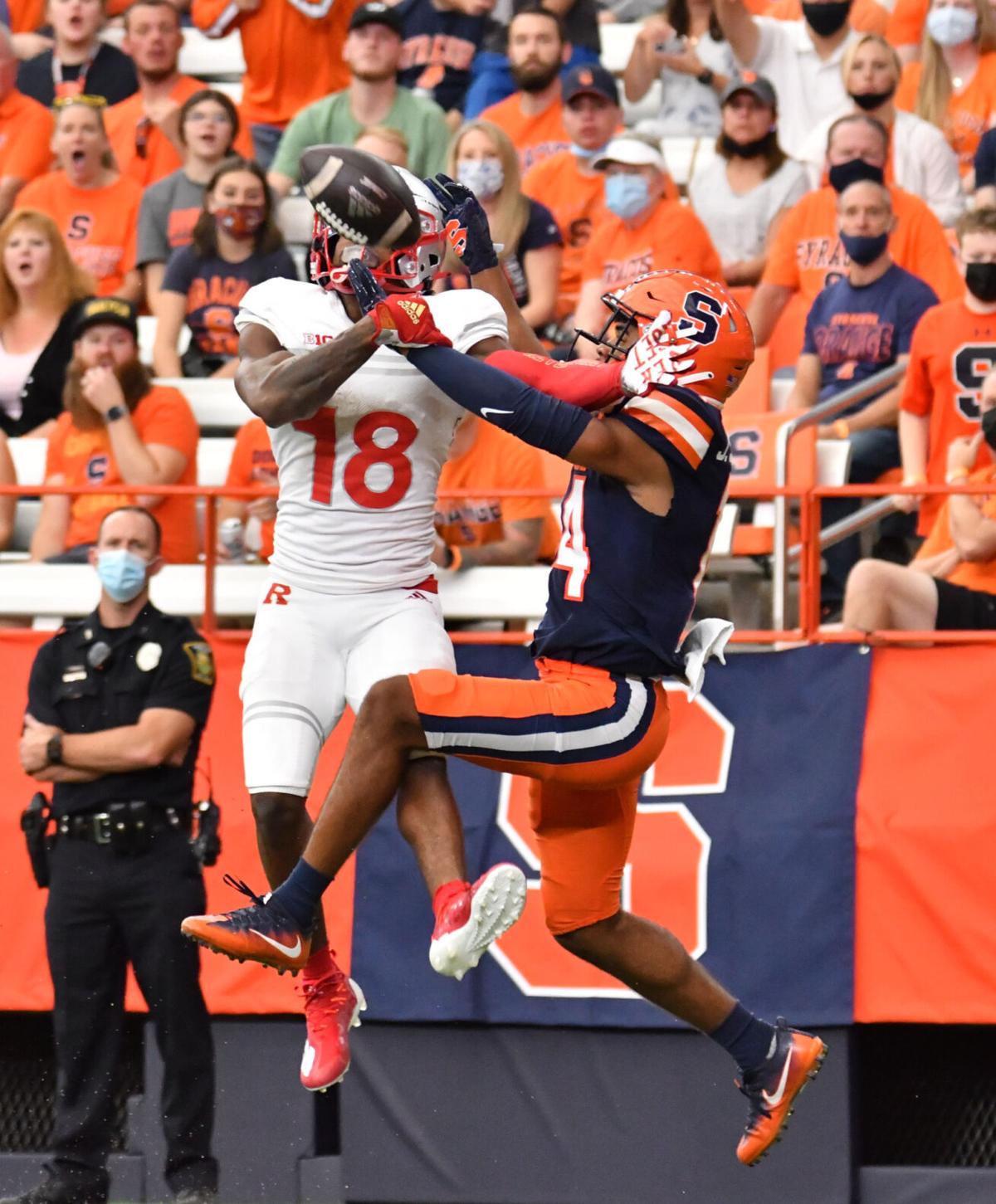 Syracuse defensive back Jason Simmons breaks up a pass for Rutgers Bo Melton on Saturday at the Carrier Dome. Mark Konezny/USA TODAY Sports 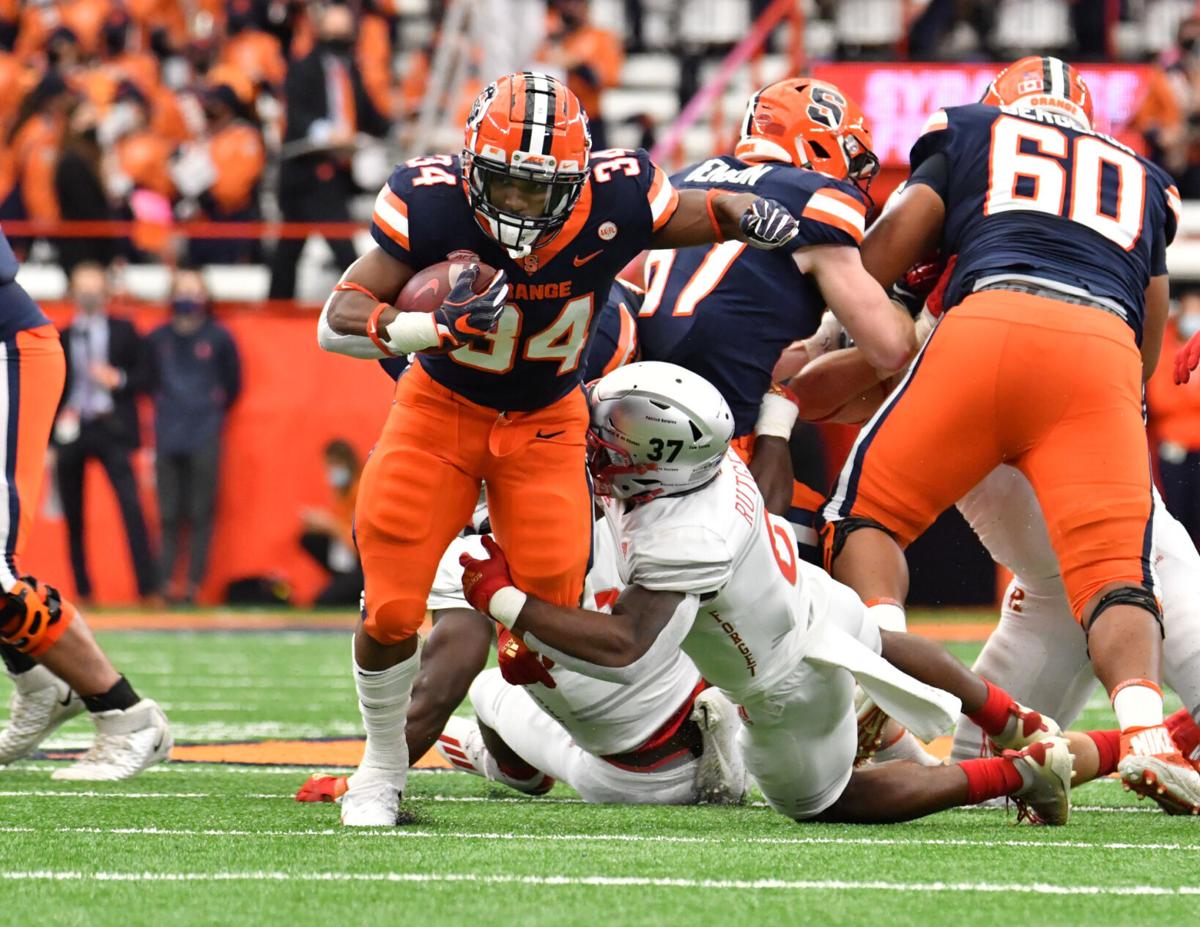 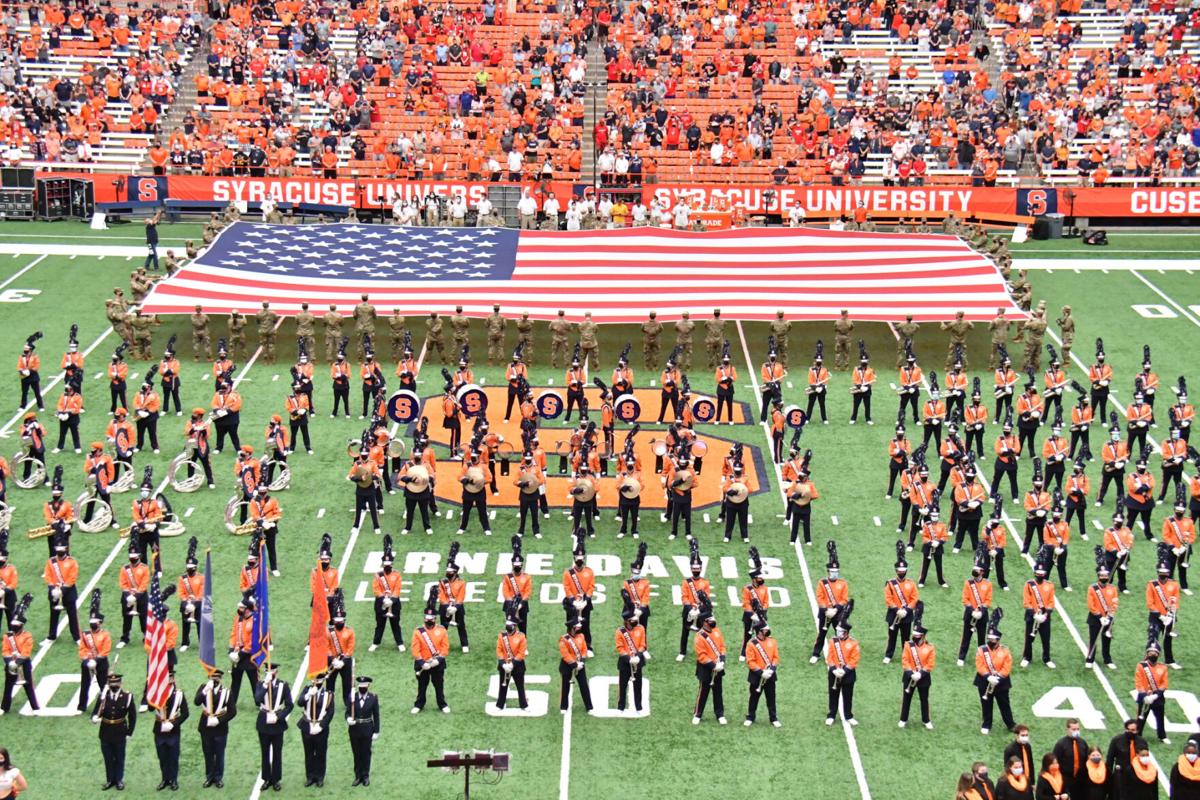 Rutgers’ Jovani Haskins catches a pass for a touchdown during the third quarter against Syracuse on Saturday at the Carrier Dome. Mark Konezny/USA TODAY Sports

Syracuse defensive back Jason Simmons breaks up a pass for Rutgers Bo Melton on Saturday at the Carrier Dome. Mark Konezny/USA TODAY Sports

SYRACUSE — The Syracuse University football team made a series of miscues to fall to Rutgers, 17-7, in its home opener Saturday afternoon at the Carrier Dome.

The Orange dropped to 1-1 overall in front of a crowd of 31,941 fans, permitted to attend a football game in the Dome for the first time since November 2019.

Defensive back Max Melton forced a pair of turnovers as the visiting Scarlet Knights improved to 2-0 for the first time since 2014 — their first season in the Big Ten and most recent appearance in a bowl game.

Rutgers eventually got enough done in a game in which neither team scored until there were six minutes and 46 seconds remaining in the third quarter. The teams were a combined 5-for-29 on third downs.

Babers was assessed an unsportsmanlike conduct penalty to spark a scoring spurt after the stagnant first half. The flag was thrown on the sixth-year SU coach as another official was announcing off-setting penalties. Babers said that he was seeking explanation on the personal foul against SU that negated a Rutgers holding penalty on the play.

Kyle Monangai scored on an 11-yard touchdown for Rutgers to deliver the game’s first points on the next play with 6:46 left in the third quarter.

On the ensuing drive, SU quarterback Tommy DeVito completed a 51-yard pass to Taj Harris to set up a game-tying 24-yard touchdown run by Sean Tucker with 5:54 remaining.

The Scarlet Knights regained the lead at 14-7 with 24 seconds left in the third when Rutgers quarterback Noah Vedral found a wide open Jovani Haskins up the middle for a 30-yard TD.

In the fourth quarter, Devito was stripped in the pocket by Mayan Ahanotu and the fumble was recovered by Rutgers’ CJ Onyechi deep in SU territory. Valentino Ambrosio then booted a 27-yard field goal for the 17-7 lead with 8:23 left.

Vedral finished 22 of 28 for 145 yards and a touchdown. Melton blocked a punt in the first half and then sealed the win with an interception with 41 seconds left.

The Orange was unable to do much offensively — no matter who it used as quarterback.

Devito completed 15 of 26 passes for 149 yards while Garrett Shrader played three series to end the first half. He was 4 of 6 for 42 yards.

Taj Harris finished with eight receptions for 122 yards and Sean Tucker rushed for 54 yards and a TD. The Orange maintained possession for only 24:04.

Andre Szmyt missed a 43-yard field goal with nine seconds left in the first half as the teams entered the break in a scoreless tie, and Taj Harris lost a fumble at the end of a catch inside the Rutgers 10-yard line in the first half.

“We have to take care of the football, going into the red zone, we have to come away with points,” DeVito said. “I think our defense played well, especially with some of the field position we were given.”

He added: “I put a lot on myself, being the quarterback of the offense, whether it’s in the run game or the pass game, I have to make it work.”

In the first half, the Orange defense tallied three sacks and limited the Scarlet Knights to just 49 yards of total offense, including minus-9 rushing.

Syracuse will host Albany in another nonconference game at noon next Saturday in the Dome.