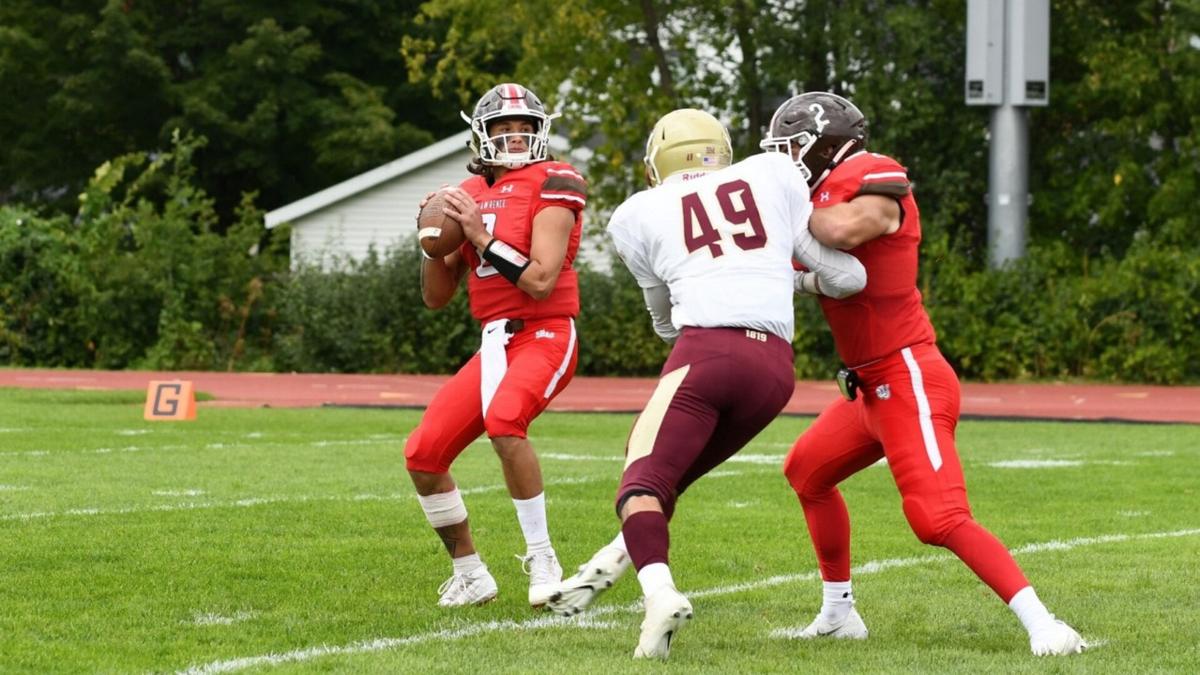 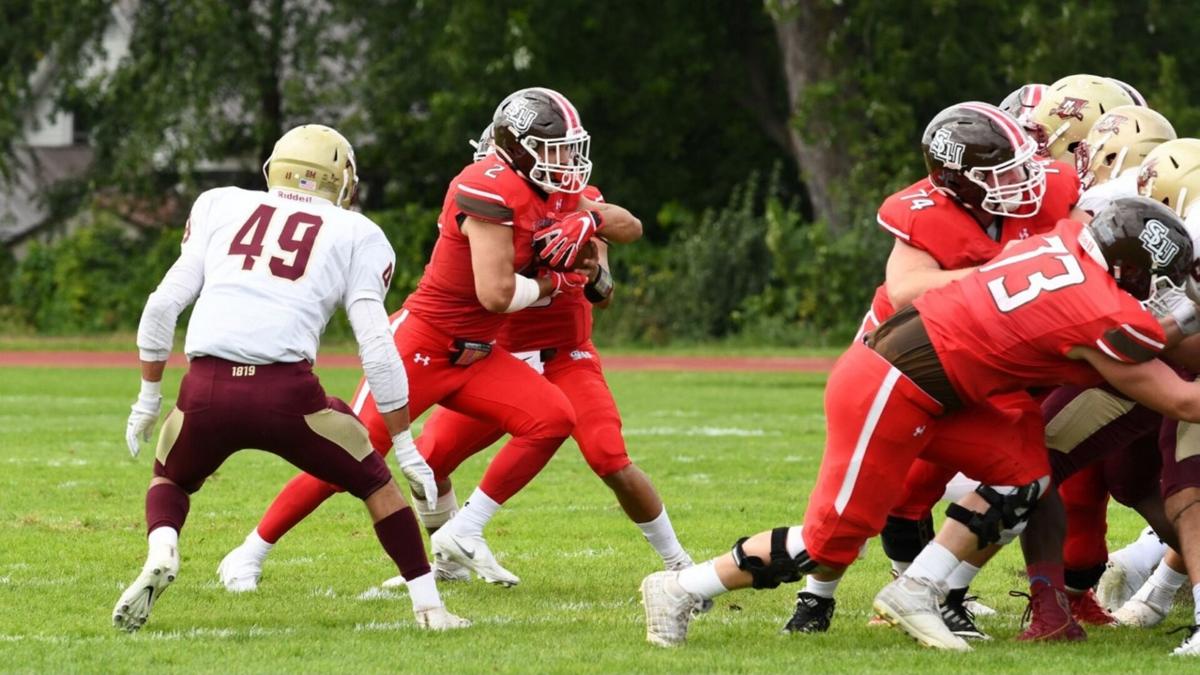 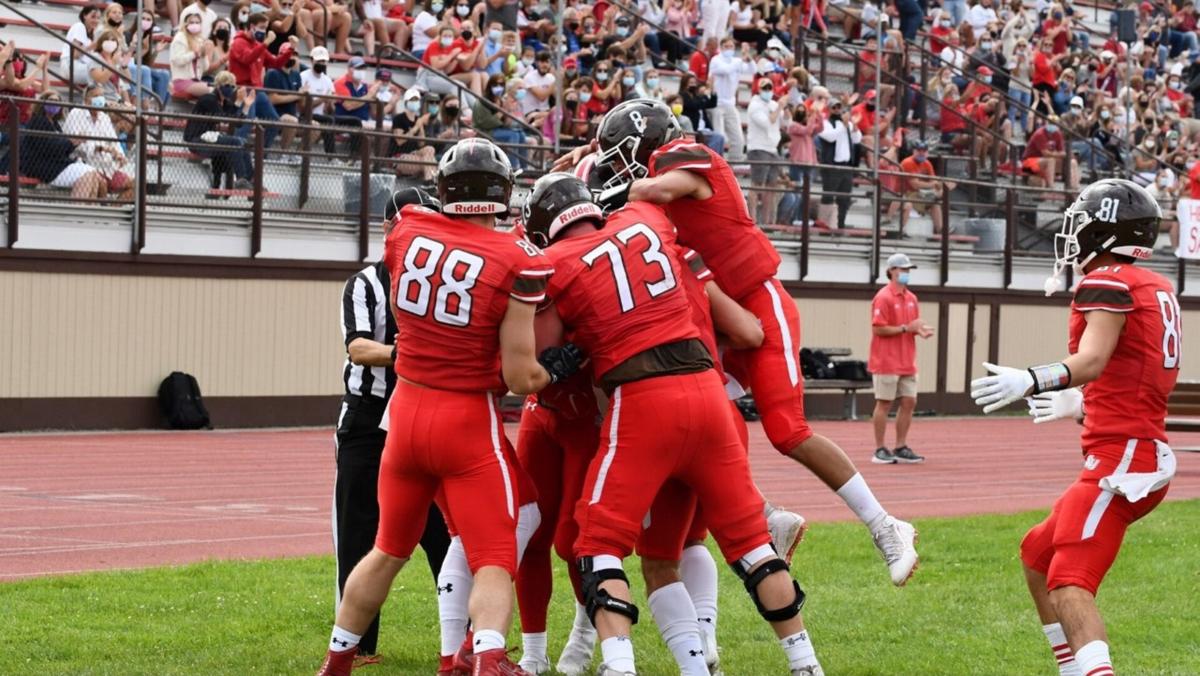 St. Lawrence University celebrates one of its five touchdowns during Saturday's game against Norwich in Canton. Carol Hill photo 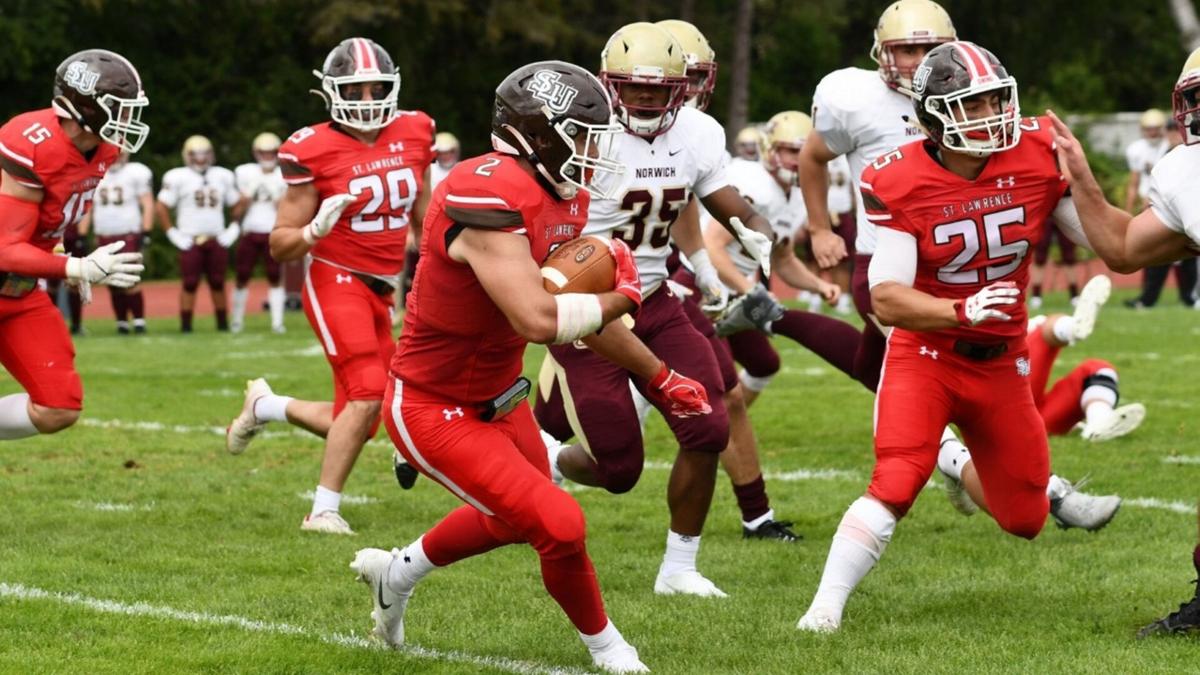 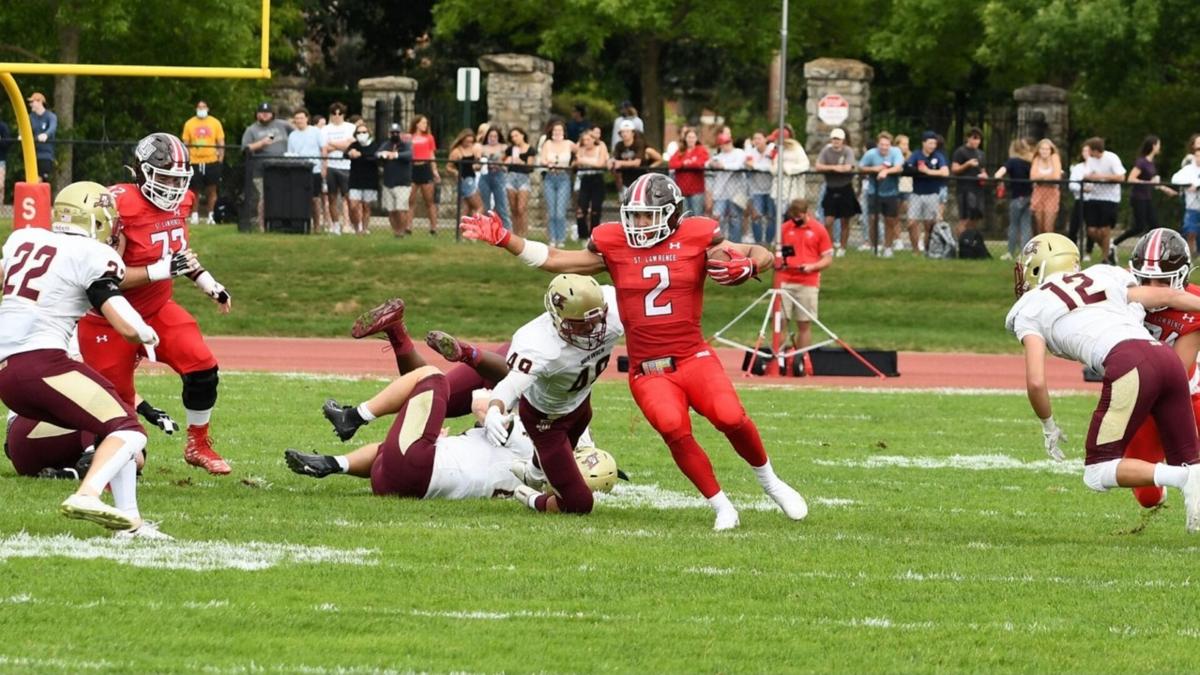 St. Lawrence University celebrates one of its five touchdowns during Saturday's game against Norwich in Canton. Carol Hill photo

CANTON — The St. Lawrence University football team’s first home game in 672 days turned into a party as the Saints routed Norwich 37-7 Saturday to win a nonconference game before 256 fans.

“The last game here, it was (Nov. 9, 2019) and it was freezing cold out,” Saints linebacker Caleb Null said. “Now it’s September and we’re back. To have a win on our home field, in our opener, it’s just unreal. I think the biggest thing is we harp on protecting the rock, winning at home. When you win at home it’s easier on the road.”

The Saints (1-1 overall) took an early lead on their second possession on a 7-yard pass from Tyler Grochot to Robert Coll.

Norwich (0-2) responded immediately with a 49-yard touchdown pass from Mitchell Theal to Trevor Chase to tie the game 7-7. A Saints defensive back slipped just before the ball got to Chase, who was able to coast to the end zone.

But SLU took the lead for good a short while later on a similar play as Grochot found Andrew Murphy on a 61-yard bomb to give SLU a 14-7 lead, which the Saints would not relinquish.

“I think it helps with momentum a lot,” Murphy said of his early touchdown. “It gets the sideline going, the defense going. The way they were lined up I kind of knew immediately before the snap it was going to be a touchdown. We’ve done it so many times before on the exact same play.”

T.J. Cornacchia caught a 9-yard touchdown pass from Grochot with just 54 seconds left in the first half to give SLU a 20-7 halftime advantage.

“I knew we did some good things last week, even though we lost,” Saints coach Dan Puckhaber said. “We just had to clean it up this week in practice and we did. We didn’t turn the ball over today and we tackled a lot better, which was two things we really emphasized this week.”

Ian Doin made it 23-7 midway through the third quarter with a 36-yard field goal.

The Saints added two more passing touchdowns from Grochot, who finished with five in the game, in the fourth quarter.

Murphy caught his second touchdown, on a 1-yard pass and then Grochot found Sean McCormack on a 23-yard pass for the final score.

“I gained 20 pounds from my freshman year, so that kind of helps out a little bit,” Schmitt said. “Our running back group is pretty deep. It was a lot of work getting there. We have a lot of guys who run the ball well. My style of running has changed a lot. Instead of running jet sweeps all the time, I have to hit the holes, fast, reading the linemen and reading gaps. It was a little bit of adjustment at first. In high school it was easier to get (long) runs, now it’s a little bit harder.”

Grochot finished 22-for-29 for 232 yards and Murphy caught seven passes for 91 yards to lead the receivers.

The Saints defense never allowed Norwich to score again after the early long pass and held the Cadets to 199 yards on 58 plays.

Norwich rushed the ball 19 times for just 15 yards. McIntyre Pahl intercepted a pass and Jacob Dreisbach led the defense with seven tackles. Null, a Carthage native and fifth-year senior, was one of three Saints with six tackles. He also made 1.5 tackles for lost yardage.

“We battled,” Null said. “At halftime our coach challenged us to not let in any more points so we accepted his challenge and they didn’t score in the second half. I think stopping the run was the big thing. Last week we let up maybe 29 total rushing yards. This week we went back right to it and stopped the run. If you stop the run they have to pass and our secondary is pretty deep.”