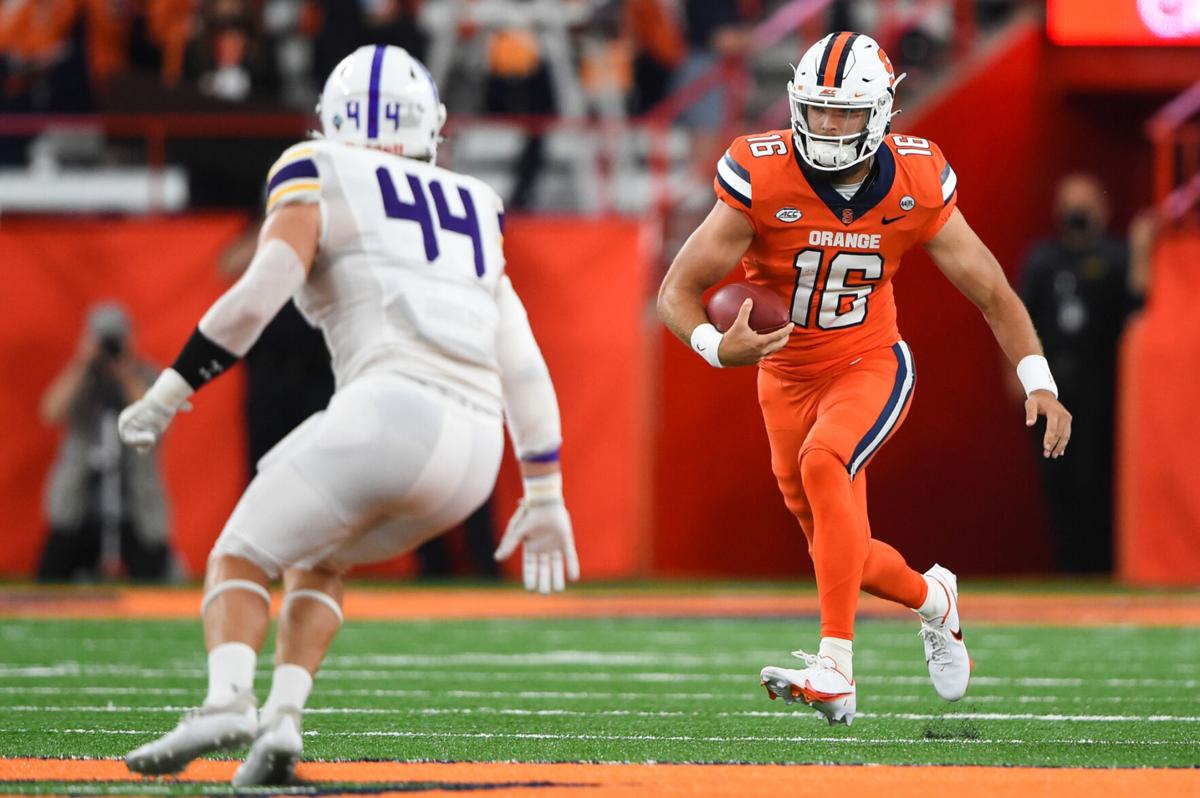 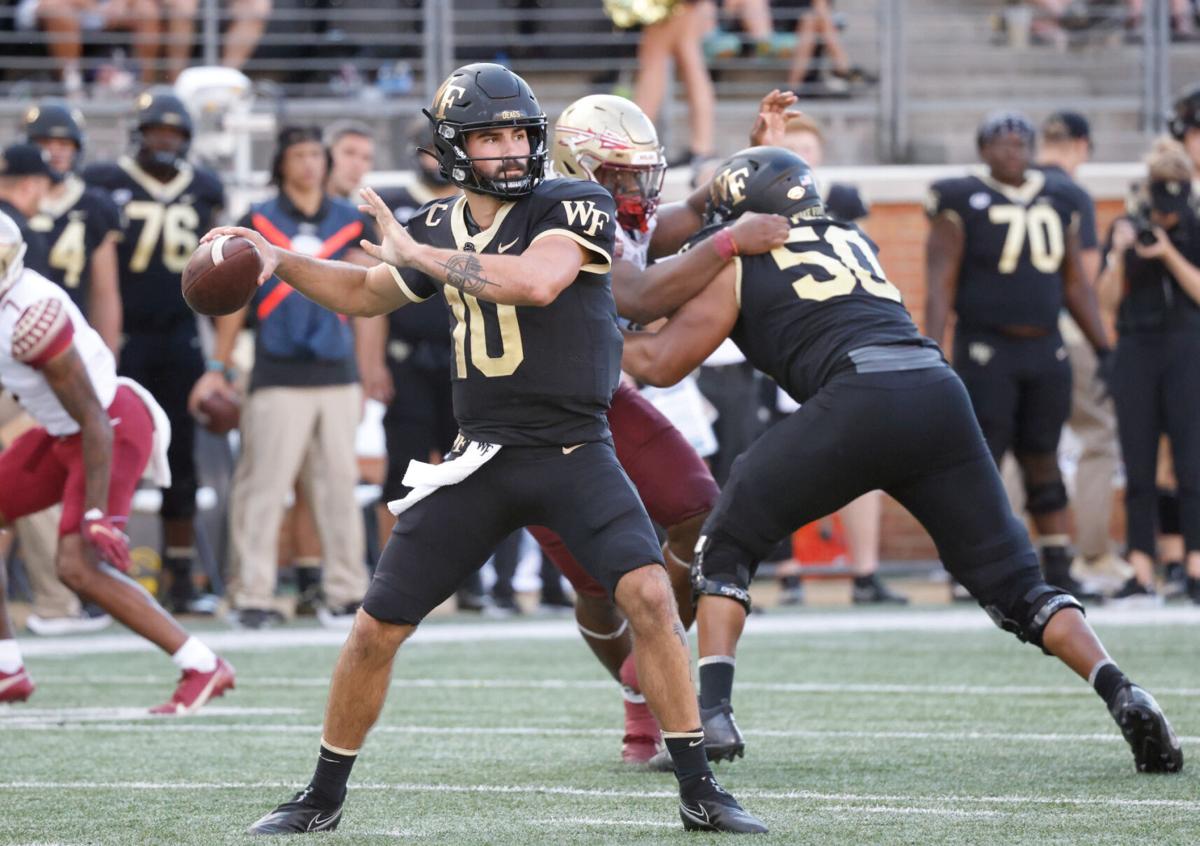 Garrett Shrader will face a familiar foe on a much larger stage as he tries to strengthen his grip on the starting quarterback spot for the Syracuse University football team.

Shrader will be opposed by budding Wake Forest star quarterback Sam Hartman, whom he bested five years ago in their lone high school varsity matchup to advance in the North Carolina Independent Schools Athletic Association playoffs.

“I remember that we came out and won, and hopefully we can do that again,” Shrader said.

Shrader supplied two touchdowns through the air, a pair of scores on the ground, and played safety after injuries depleted the secondary to push Charlotte Christian High School to a 29-28 victory over Davidson-Day in November 2016 despite Hartman topping 400 passing yards.

Each signal caller from Charlotte, N.C., foreshadowed the formula that they have carried into their collegiate careers and will display in today’s ACC clash.

Shrader matched eight other SU quarterbacks for the team record with three rushing touchdowns last game and ran for a career-high 137 yards in that 33-30 setback at Florida State.

The first-year transfer from Mississippi State is tied with breakout SU running back Sean Tucker for 12th nationally with seven rushing touchdowns apiece. The duo combined for 239 rushing yards last game and handled all 40 attempts, marking the fewest number of ball-carriers in a game for SU over the last four decades.

The Orange has adapted accordingly — rushing on 70 percent of its offensive plays in Shrader’s two starts with a classic ground-and-pound approach mixed with modern run-pass option elements — but coach Dino Babers stressed the need to make more plays through the air.

“You want to try to put your best pieces forward, so you’re going to operate with whoever is operating the best,” Babers said.

“I think we’re getting closer to what (the run-pass balance) needs to be. I think we need to take a few more shots in the throwing game, you saw in the second half (against FSU) how the game looked different than it has in a while, and I think we need to continue to grow on that.”

Syracuse enters ranked second in the ACC in rushing (220.6 yards per game) but last in the conference for passing offense (171). The Wake Forest pass defense is exploitable, surrendering 252 yards per game to rank outside the FBS top 100.

“I still think we need to be more efficient in the pass game,” Shrader said. “So, whether that’s running things a little differently than we are now, I know Saturday that I have to absolutely hit on everything.”

Hartman, meanwhile, is operating one of the top passing attacks in the ACC for Wake Forest, which was listed as a six-point favorite on oddsshark.com Friday afternoon.

The redshirt sophomore is coming off 324-yard passing performance in a 37-34 victory over Louisville and joined SU’s Tucker as one of 10 midseason additions to the Maxwell Award Watch List this week to recognize the top overall player in college football.

Hartman is passing for 257 yards per game while ranking third in the ACC in passing efficiency (156.1) and 28th in total offense at 280.4 yards per game. He has thrown 11 touchdowns and ran for a pair to just two interceptions, and his 44 career TD passes are 14 shy of matching the all-time WFU record.

Wake Forest is one of 17 unbeaten FBS teams in its eighth season under head coach Dave Clawson.

The Demon Deacons sport a plus-19 scoring margin to rank 11th nationally and have started 5-0 for the third time in the last five seasons. They have reached a bowl game every year in that span, trailing only Clemson and Miami (Fla.) for the longest streak in the ACC.

NOTES: The recent history of this matchup has been defined by high-scoring offenses, but each enters with play-making defenses today.

SU leads the ACC in total defense, yielding 284.6 yards per game, and its four sacks per game ranks third nationally. Marlowe Wax (5) and Cody Roscoe (4.5) rank second and third, respectively, in the ACC for sacks.

Wake has averaged just 4.55 penalties per game in the last 3 seasons, the third fewest in the FBS behind Navy and Minnesota. They also lead the ACC and rank ninth nationally in turnover margin (1.4).

The last four SU-WFU matchups have been split in high-scoring outings. Wake Forest has averaged 39 points to SU’s 34 in that span. WFU won 34-18 in the Dome last year and SU holds the 6-4 advantage in the all-time series.

Syracuse: WR Anthony Queeley — The 6-foot-2, 205-pound redshirt sophomore has just 7 catches for 114 yards but is in line for additional targets as the primary outside receiver following the transfer of Taj Harris.

He caught a 26-yard TD for his first score to go with a season-high 50 yards with Harris out last game. He started all 11 games as the second-most targeted WR behind Harris last year, finishing with 37 receptions for 378 yards and two TDs.

Tom has yielded one sack and assessed three penalties in 1,902 snaps over three-plus seasons, has the highest pass block grade in the FBS by Pro Football Focus College (94.2) and is the ACC’s leading returner in pass block efficiency.