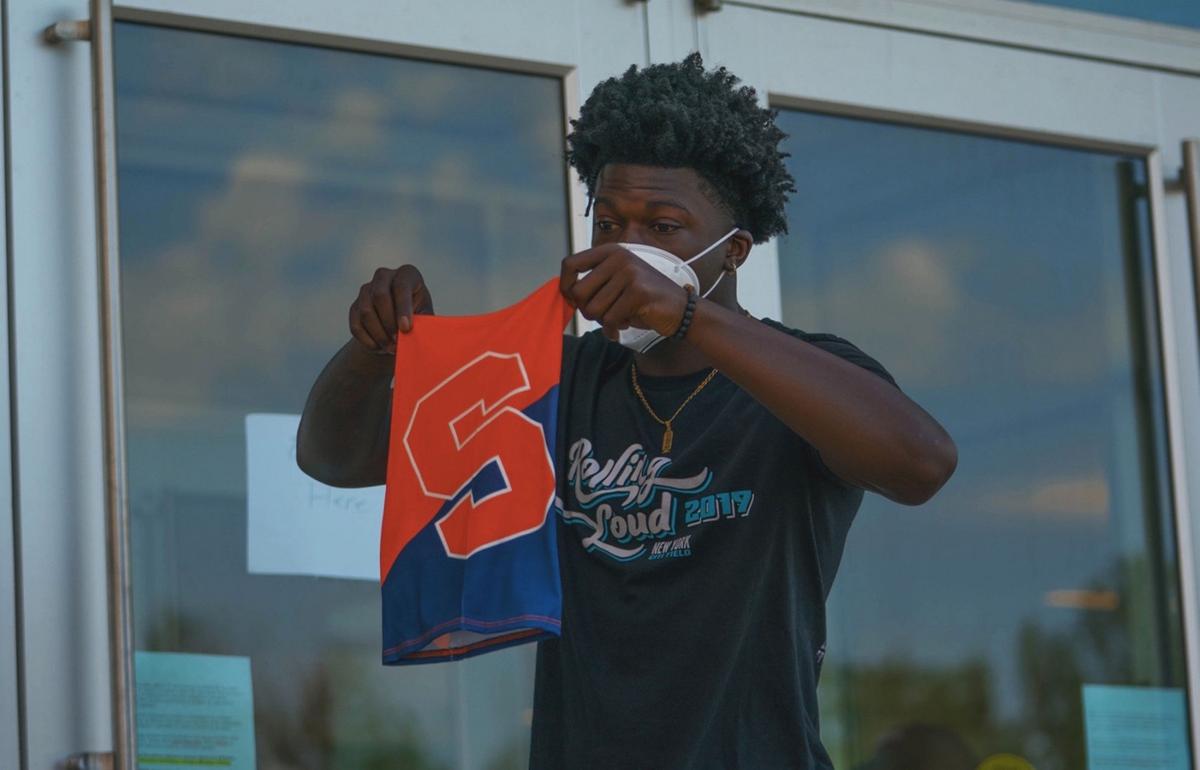 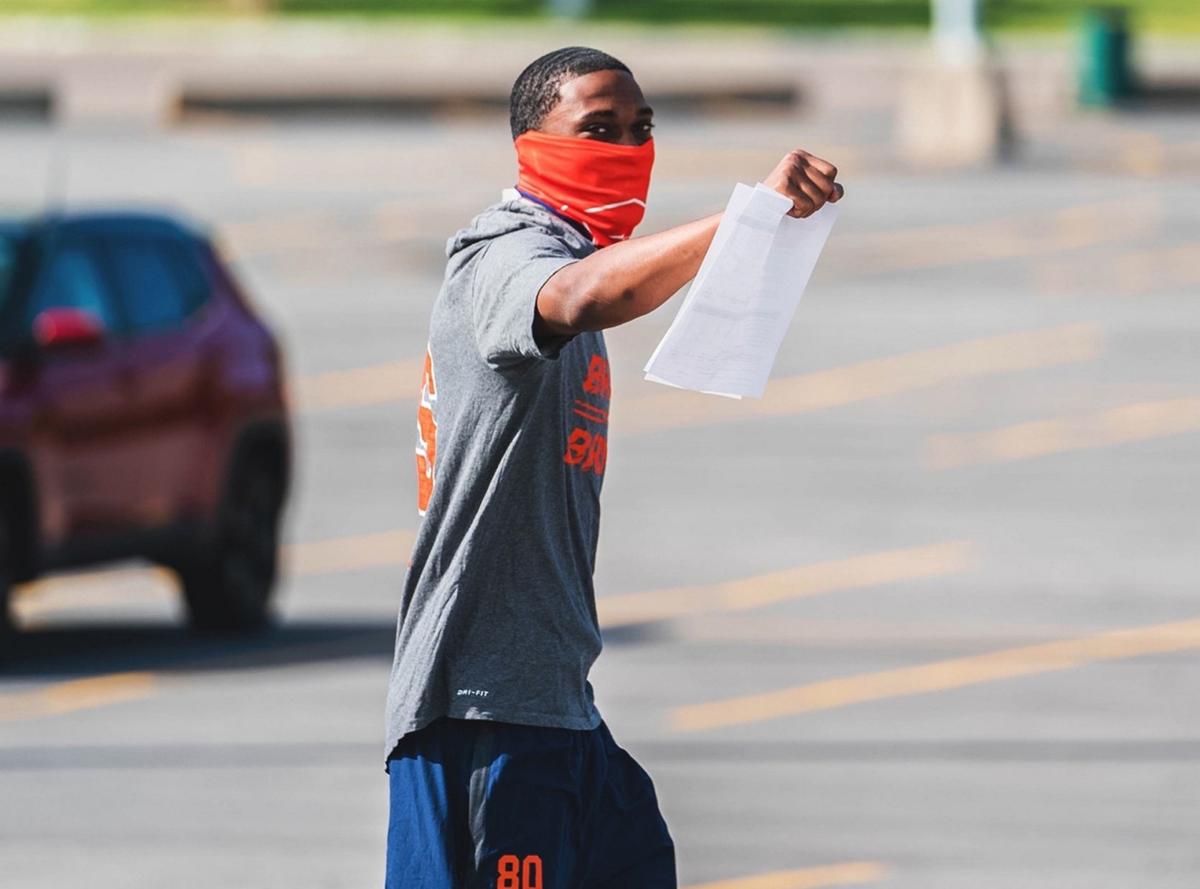 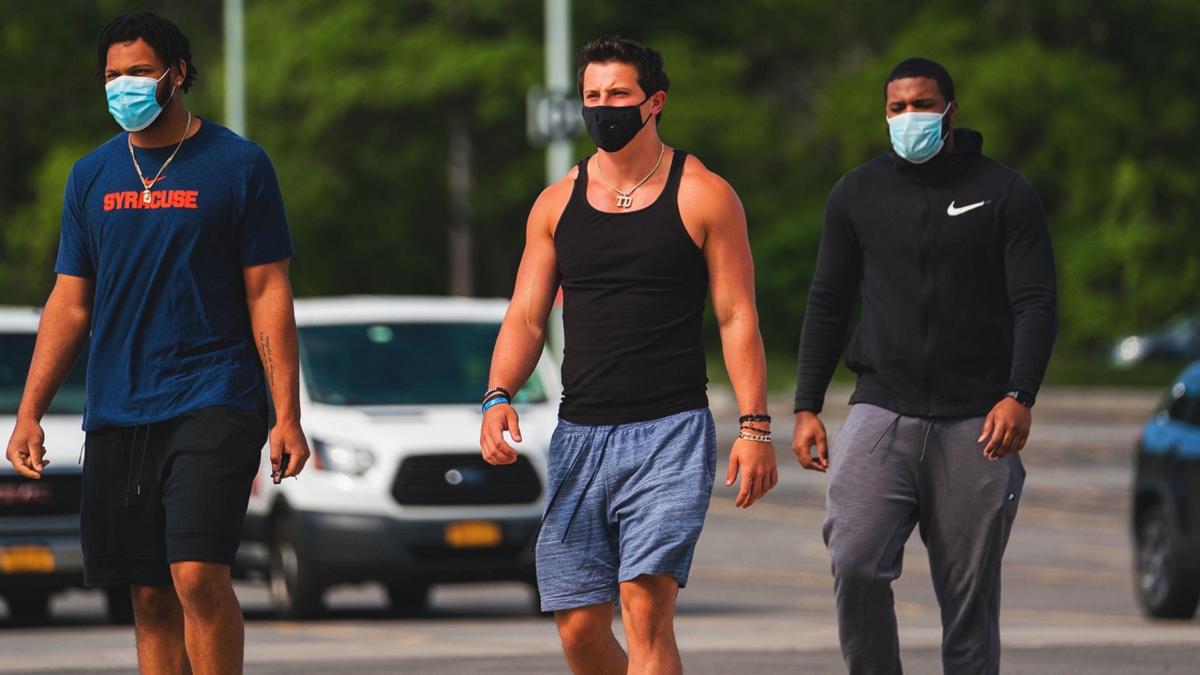 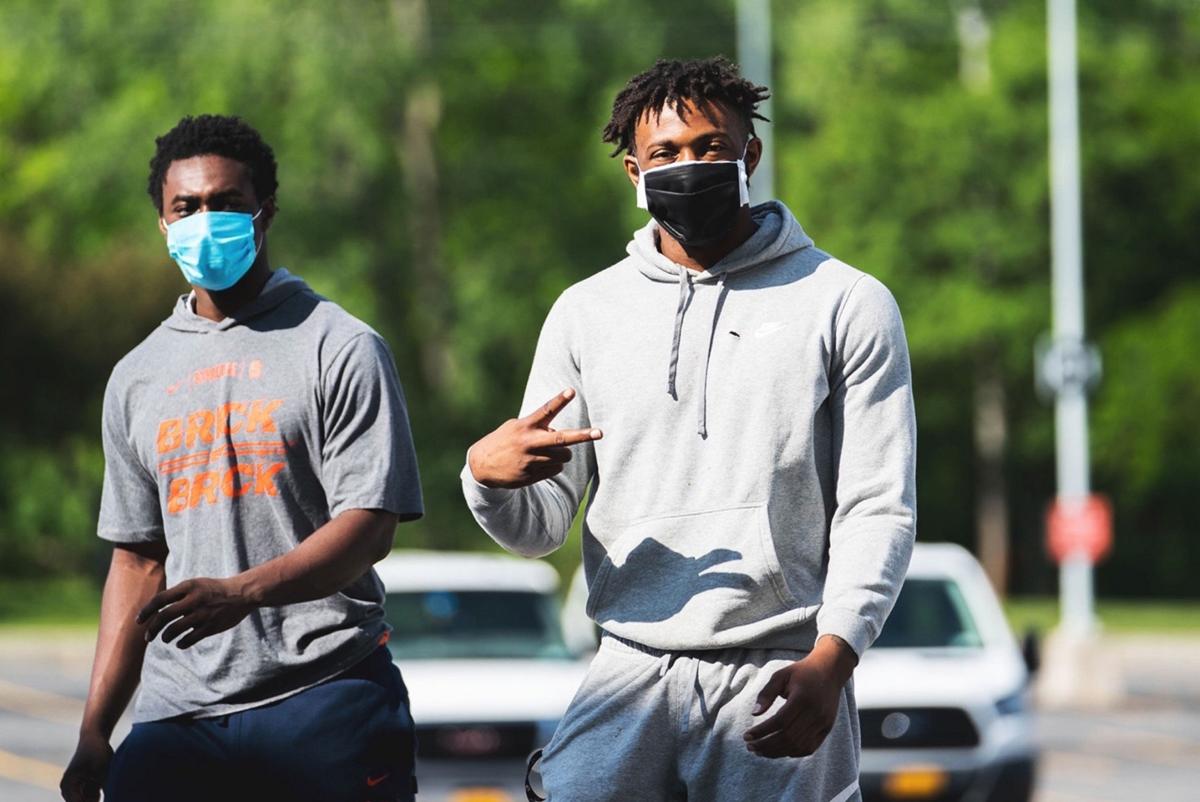 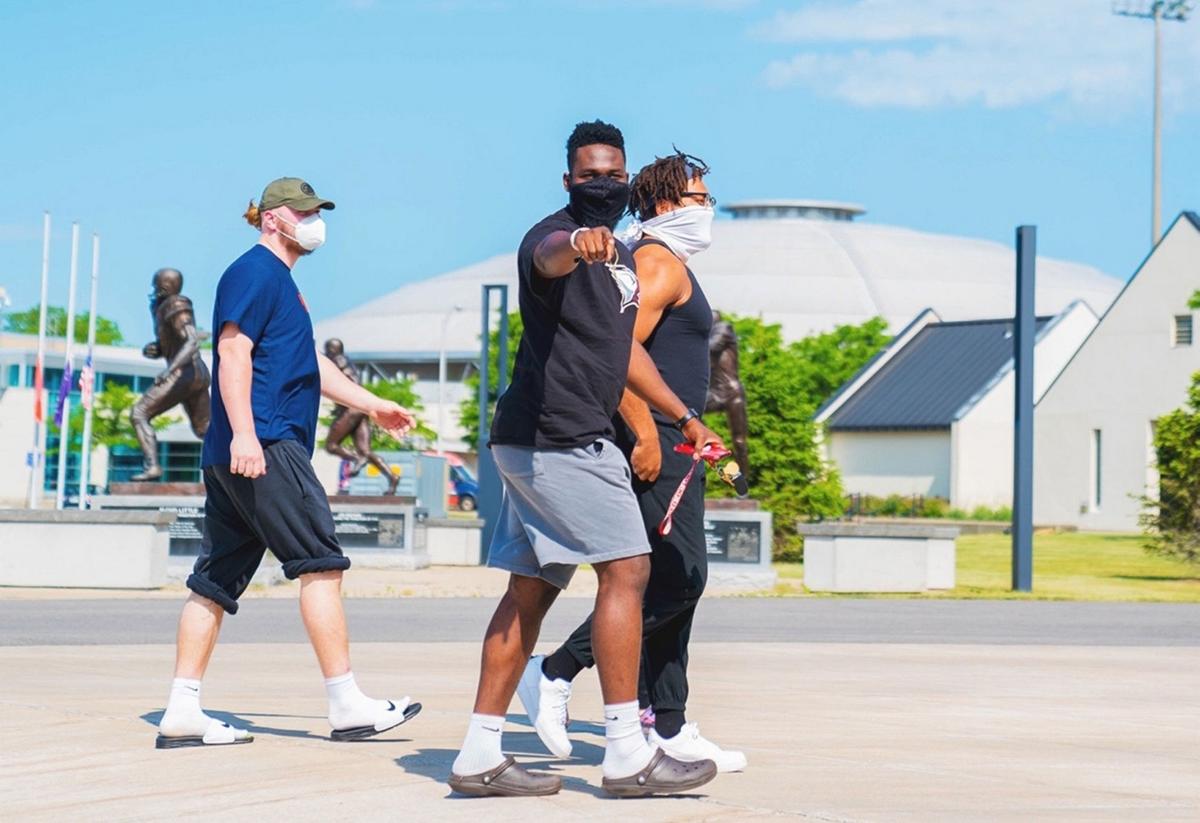 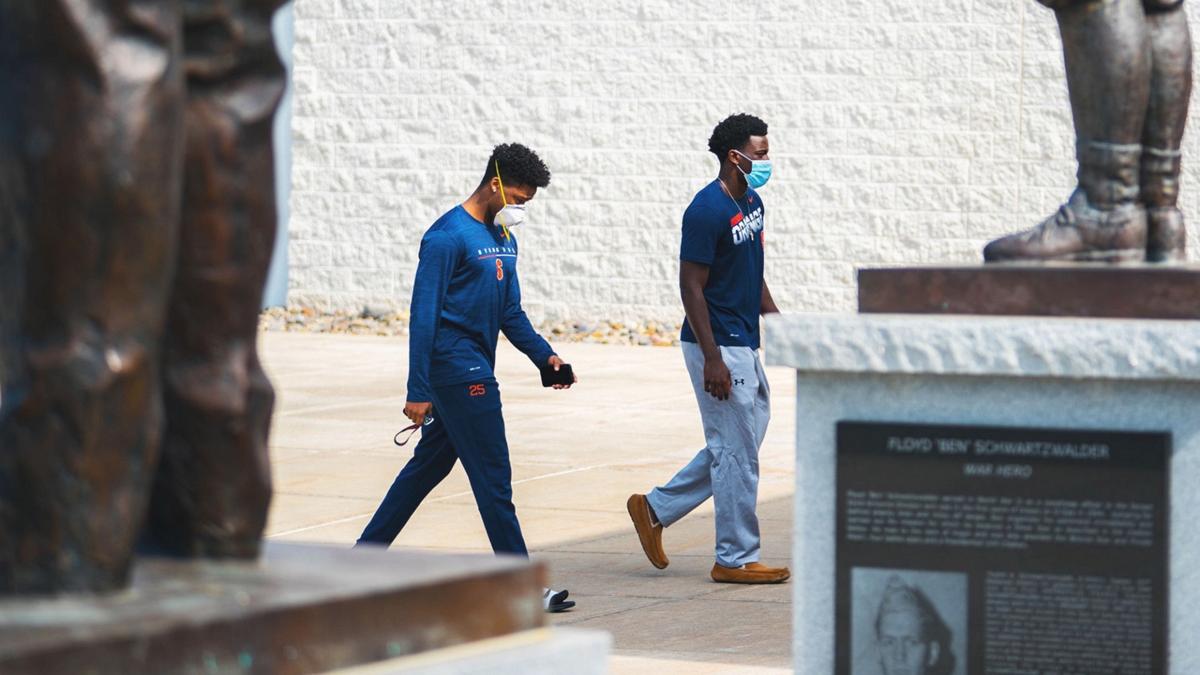 The Syracuse University football team has started the unpredictable process of returning to its first action since the coronavirus pandemic shut down the sports world nearly three months ago.

Orange players and staff members returned to campus and underwent COVID-19 testing Tuesday morning at the Ensley Athletic Center in advance of voluntary summer workouts at the SU facilities.

Syracuse head coach Dino Babers — who is among the roughly 130 members of the program to return and be tested, including 65 players — addressed the media via zoom video conference Thursday for the first time since spring practice ended prematurely in mid-March.

Babers tackled topics such as the many challenges of the unprecedented offseason, new safety protocol for players and staff, the varied uses of technology during the interim period, further thoughts on racism in the country and recent discussions with players, recruiting during the pandemic, and a multitude of other points in the wide-ranging appearance that lasted more than 50 minutes.

“We’ve never gone through anything like this before, and I don’t know,” Babers said of the unique obstacles preparing for his fifth SU season. “I think back to ‘Heartbreak Ridge’ with Clint Eastwood — this is going to be an adjust and improvise type situation. I literally don’t know what’s going to happen two weeks from now, and I can’t look into the future and say: ‘When we do this and this, we’re going to be like this.’ There’s no history, there’s no knowledge to pull from, and now this is strictly a gut situation.”

Tuesday’s testing was the first step in SU’s operational plan, which was developed by the university with guidance from public health and government officials. The phased approach consists of initial testing and quarantine periods for any positive tests, then players being assigned to four-person pods and restricting contact to their respective groups and assigned coaches during the first phase.

All workouts will be conducted with a series of guidelines to limit the potential for spread of the virus.

Babers confirmed that coaches will also be tested and be subject to daily temperature checks.

In the second and third phases, which are likely to be implemented in July, the pods will grow in size, first to include up to 30 players and then, eventually, the full team for the hopeful start of training camp.

“It’s great to be back and get this thing rolling again,” senior offensive lineman Airon Servais, a returning team captain with a team-leading 37 career starts, stated in provided comments. “It’s not the same when you’re off on your own training versus when you’re able to be around the guys and feel that energy and feed off each other.”

Babers answered several follow-up questions during his Thursday session related to his letter released the day prior that addressed systematic racism and recent worldwide protests for police reform.

The often-private coach said that he was inspired to share his feelings after a Zoom call with a handful of players. He stated that he plans to finish those discussions with the full team soon, and said that the overall unit is at a ‘3,’ on a 1-10 scale of conducting those conversations.

“Young men that I love, they’re my stepsons to me, and how important it was to them that I get out there and say something, they brought me to tears,” Babers said. “It’s hard to let family down.”

Babers said he was supportive of players speaking out and would hope that they communicate and be unified in approach as a team when asked of any potential in-season protests.

He also stated that SU is likely to shift its practice time on Election Day (Nov. 3) until after the polls close.

“Being on a football team is a privilege, being able to speak your mind in the United States of America is a constitutional right given by our forefathers, so I don’t think you can take that away from somebody,” Babers said. “With our guys, I would use the word energized. They are energized and they want to make a difference. My job as the grandfather of the group is to give them the knowledge, and when all this energy is done, I want there to be some action taken that bears fruit.”

Babers also elaborated on ways SU tried to accommodate for its mostly lost spring during the time away from campus — utilizing video chat and other technology to help players get acquainted with new coordinators on both sides of the ball, and strengthen their connection to player alumni.

New offensive coordinator Sterlin Gilbert held frequent video conferences with his unit and specific player groups to attempt to teach his offense in that adjusted setting, while new defensive coordinator Tony White did the same with his new pupils on the SU defense.

The Orange’s spring practice was halted after three sessions without full pads, and they lost 12 total practices. The shutdown cost SU critical time to learn and apply the new systems during in-person training, allowing for necessary coaching on the field throughout installation.

Babers said that one benefit to the period he referred to as “the Zoom era,” is that players were able to absorb the new systems on paper, processing the information in a sit-down setting with more study time and less surrounding on-campus distractions.

“They may come out stronger than ever before, a real sense of what they’re supposed to do mentally, which would be a positive,” Babers said. “The flip side of that is it’s not a situation where they’ve actually done the act over and over again, 21 days to form a habit, you want to do something so many times that you get to the art of knowing without knowing, you can do it without thinking.”

The Orange also held Zoom conferences with a series of prominent former players now in the NFL, including Chandler Jones and Justin Pugh of the Arizona Cardinals, among others, to offer a different perspective on varying topics. Babers said that he often left the meetings and allowed the talks to last an additional 20-40 minutes, and planned to conduct similar visits in the future.

Babers also touched on the unique experience of recruiting over the past few months and said that he believes restrictions in that area, especially on-campus visits, are likely to remain in place for the foreseeable future.