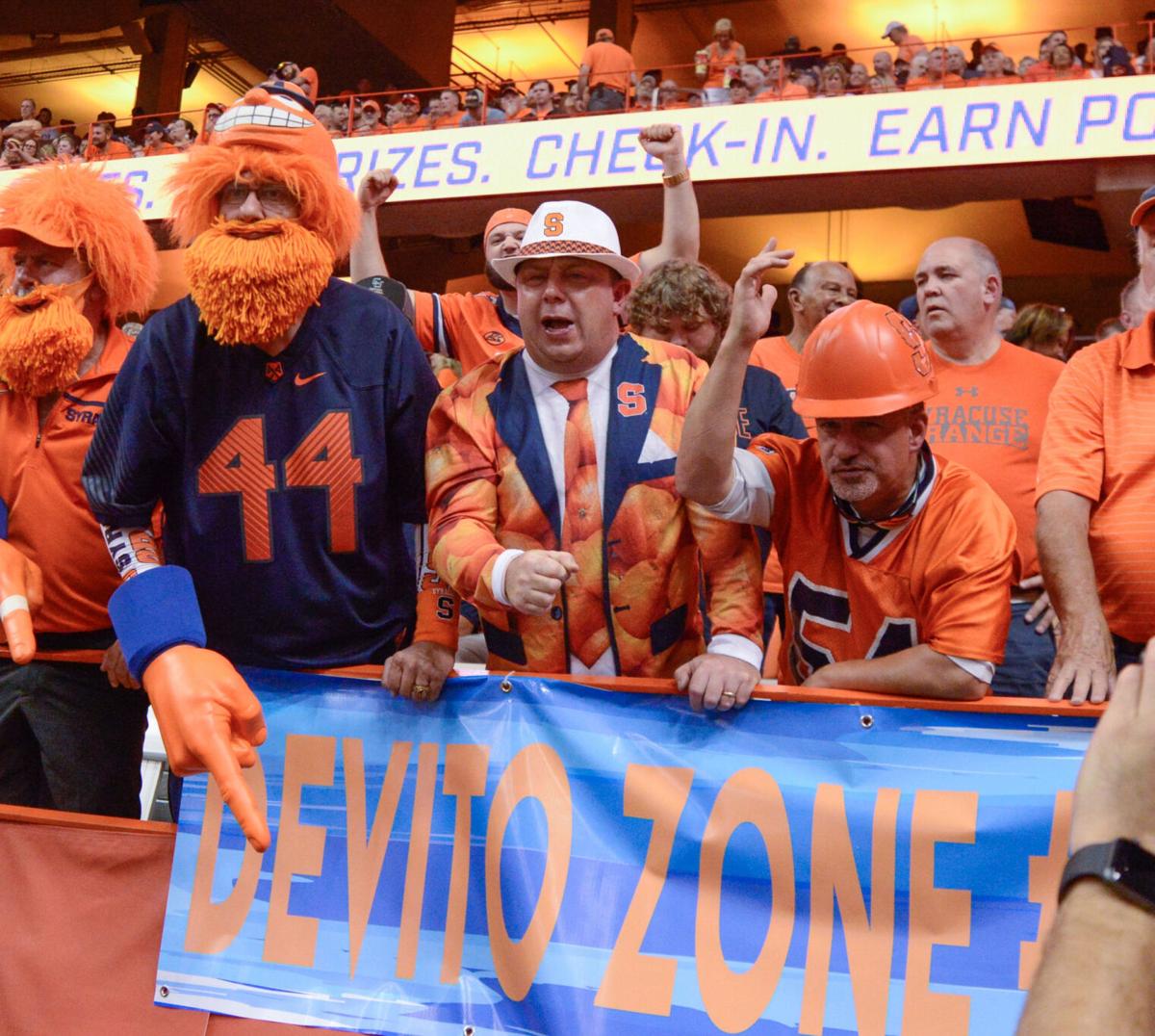 Syracuse Orange fans encourage their team during a game against Clemson Sept. 14, 2019, at the Carrier Dome in Syracuse. Mark Konezny/USA TODAY Sports 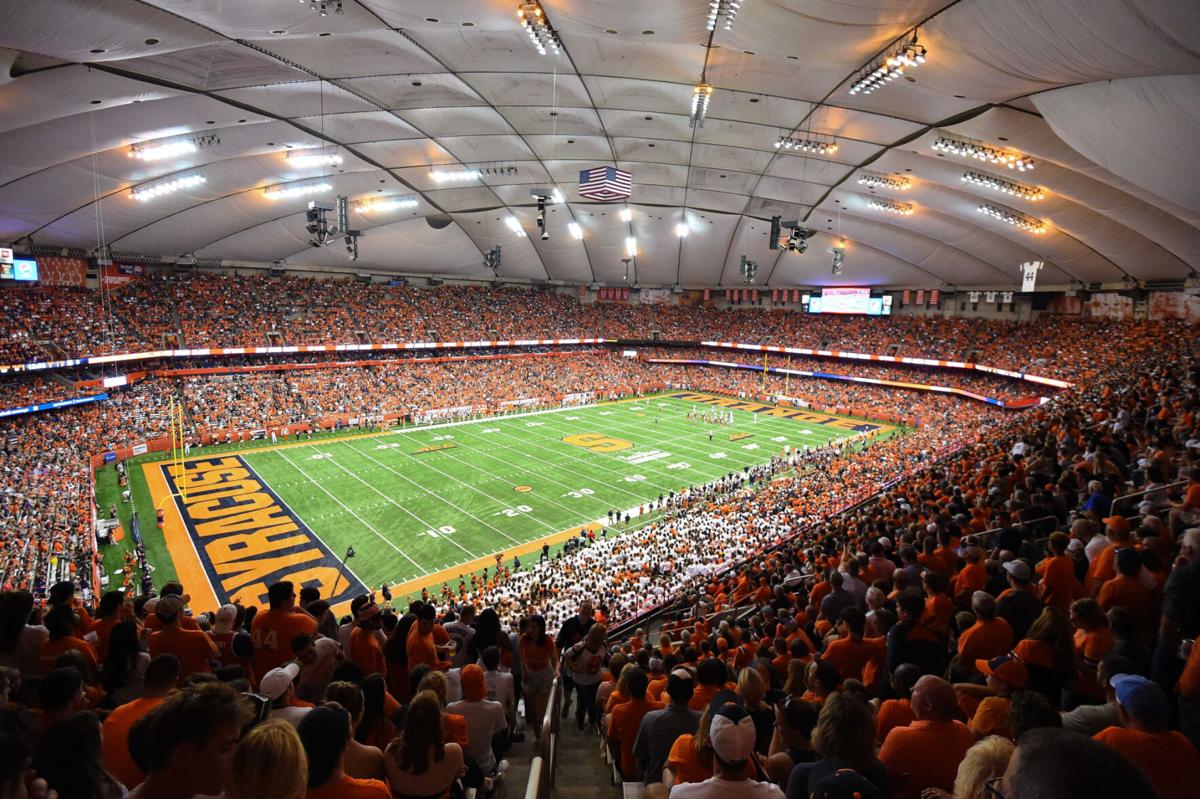 General view of the Carrier Dome during the second quarter of the football game between Clemson and Syracuse on Sept. 14, 2019, in Syracuse. Rich Barnes/USA TODAY Sports 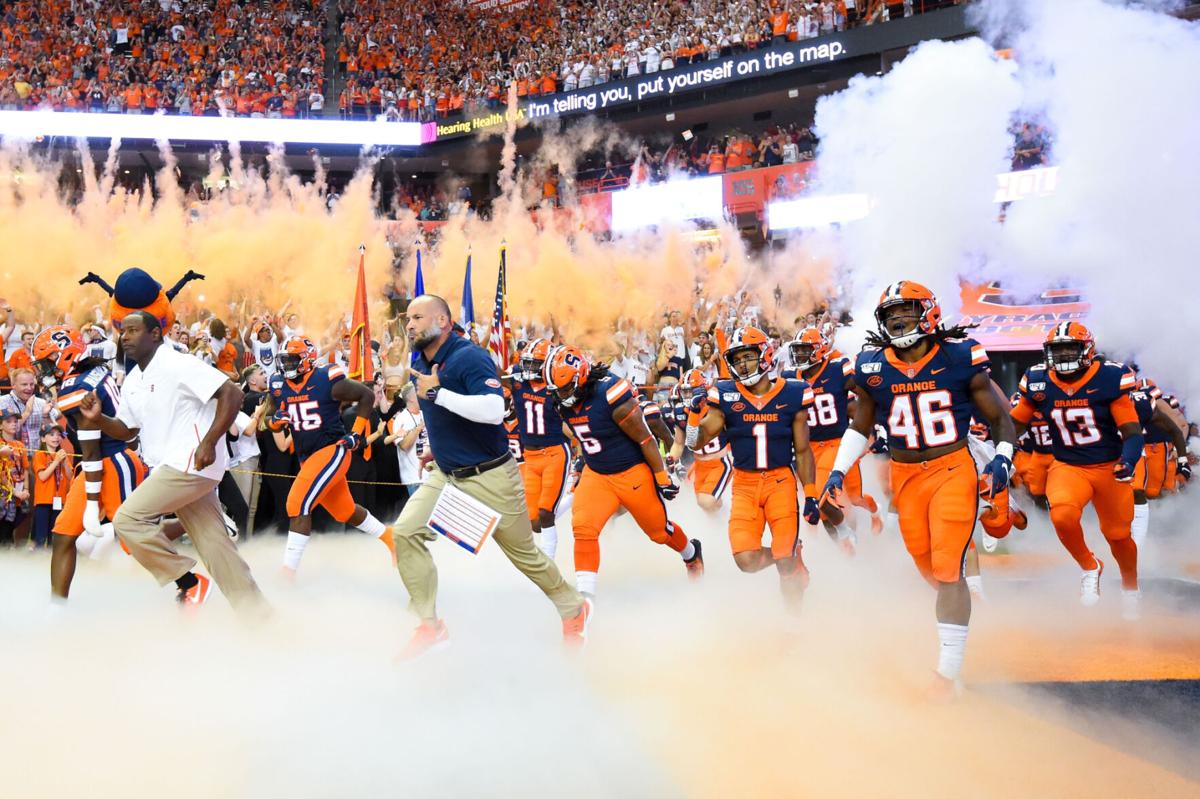 Syracuse Orange head coach Dino Babers, left, leads his team on the field prior to the game against Clemson on Sept. 14, 2019, at the Carrier Dome in Syracuse. Rich Barnes/USA TODAY Sports

Syracuse Orange fans encourage their team during a game against Clemson Sept. 14, 2019, at the Carrier Dome in Syracuse. Mark Konezny/USA TODAY Sports

General view of the Carrier Dome during the second quarter of the football game between Clemson and Syracuse on Sept. 14, 2019, in Syracuse. Rich Barnes/USA TODAY Sports

Syracuse Orange head coach Dino Babers, left, leads his team on the field prior to the game against Clemson on Sept. 14, 2019, at the Carrier Dome in Syracuse. Rich Barnes/USA TODAY Sports

When Syracuse University football coach Dino Babers and his players envisioned the debut of the renovated Carrier Dome set for Saturday, they pictured nearly 50,000 roaring fans pushing the new sound system to its limit.

The Orange remains excited to break in the new surroundings with its home opener slated for noon Saturday against Atlantic Coast Conference foe Georgia Tech, but can’t help but feel for the fan base that will be unable to attend the unveiling of the “New Stadium Experience” due to state COVID-19 restrictions.

Syracuse is aiming to bounce back from an 0-2 start overall and in the ACC when it plays the Yellow Jackets (1-1, 1-0) while hosting its first game in the new-look Dome, following $118 million in upgrades as part of the largest capital project in SU history.

“We miss our fans, we’re going to miss our home-field advantage, and we’re looking forward to getting that opportunity again,” Babers said of playing the home opener in an empty stadium.

“Being in there with 40,000 people is like being somewhere else with 90 (thousand),” he added. “It gets so loud, and I hope the acoustics are even better. It’s such a place where you can get a bunch of people on top of each other and make it like you’re in Wolverine Stadium or somewhere with 100,000 people.”

The SU athletics department posted a short video and some photos of the upgraded Dome to its social media pages Thursday morning, and have frequently posted updates since construction started prior to the onset of the pandemic in March. The work continued throughout the spring and summer to remain on track with initial plans to complete the first phase of the project in time for the football home opener.

The Orange conducted practice in the new facility for the first time Thursday morning. Babers said he wanted players to feel out the new turf surface, and specifically for those in the passing and kicking games to adjust to the lighting changes under the new roof.

Babers also wanted players to see the “face-lift,” in advance and not feel like they were walking into a new venue for their first home game.

Syracuse junior defensive back Trill Williams said that while he has missed the interaction with fans during the first two road games — SU has played in empty stadiums at North Carolina and Pittsburgh — he hasn’t noticed the absence of a crowd while locked in during each play.

“I feel like you have to have a unique imagination,” Williams said. “Sometimes when I go in to work out by myself, I just imagine all the fans being in there and it motivates me to work harder. You’re going to have to use your imagination, be a kid again, and picture that stadium full.”

Among the upgrades completed are a new fixed roof, lighting and audio systems, air conditioning, the new turf surface, along with improved accessibility and air flow throughout the Dome.

The Dome will also contain a center-hung scoreboard of 7,022 square feet to mark the second-largest center-hung system in the nation. The new crown truss atop the building consists of more than six million pounds of structural steel.

The Carrier Dome originally opened in 1980 and the New Stadium Experience project was announced more than four years ago.

Syracuse athletic director John Wildhack credited his predecessors and the current university administration, including SU chancellor, Kent Syverud, for the initiative during a Thursday press conference.

Wildhack walked through the completed renovation project last week and said that he was eager to share in the full experience with the SU faithful.

“When you walk in, it really looks like a new facility,” Wildhack said. “It’s a combination of the roof, the lighting grids, the center-hung scoreboard, it’s just dramatically different, so I can’t wait to see it all operating — the lights, the sounds, the center-hung video — at full capacity. I think when we’re able to achieve that and when we can have fans in, I think it will really enhance the experience and the enjoyment for our fans and our students, and that’s clearly our desire.”

Wildhack stated that he is hopeful the football team will be able to play in front of a limited crowd at the Carrier Dome at some point this season.

“We have filled out a very extensive protocol focused on football, and we look forward to sharing that at the appropriate time with the appropriate authorities,” Wildhack said.

DeVito twice left last Saturday’s 21-10 loss at Pittsburgh, the second straight game in which he was sacked seven times to open the season. Senior Rex Culpepper entered and tossed a 69-yard touchdown to Taj Harris on his second play for SU’s only touchdown of the season so far.

Babers confirmed that while Culpepper is likely to see time in designed packages, as he did prior to DeVito leaving Saturday’s game, that the incumbent remains the starter moving forward.

Wildhack placed a request late Wednesday afternoon for ESPN to make Saturday’s home opener available on a linear cable TV network in the area. He had yet to hear back as of Thursday afternoon.

The game is scheduled for streaming through the ACC Network Extra or Fox Sports App, but not scheduled to be broadcast live in the area on any of the regional sports network affiliates. The YES Network, which often airs such games, has a conflict as its top priority, the New York Yankees, are scheduled to play against the Miami Marlins at 1:05 p.m. Saturday. YES plans to air the game on tape delay at midnight Saturday.