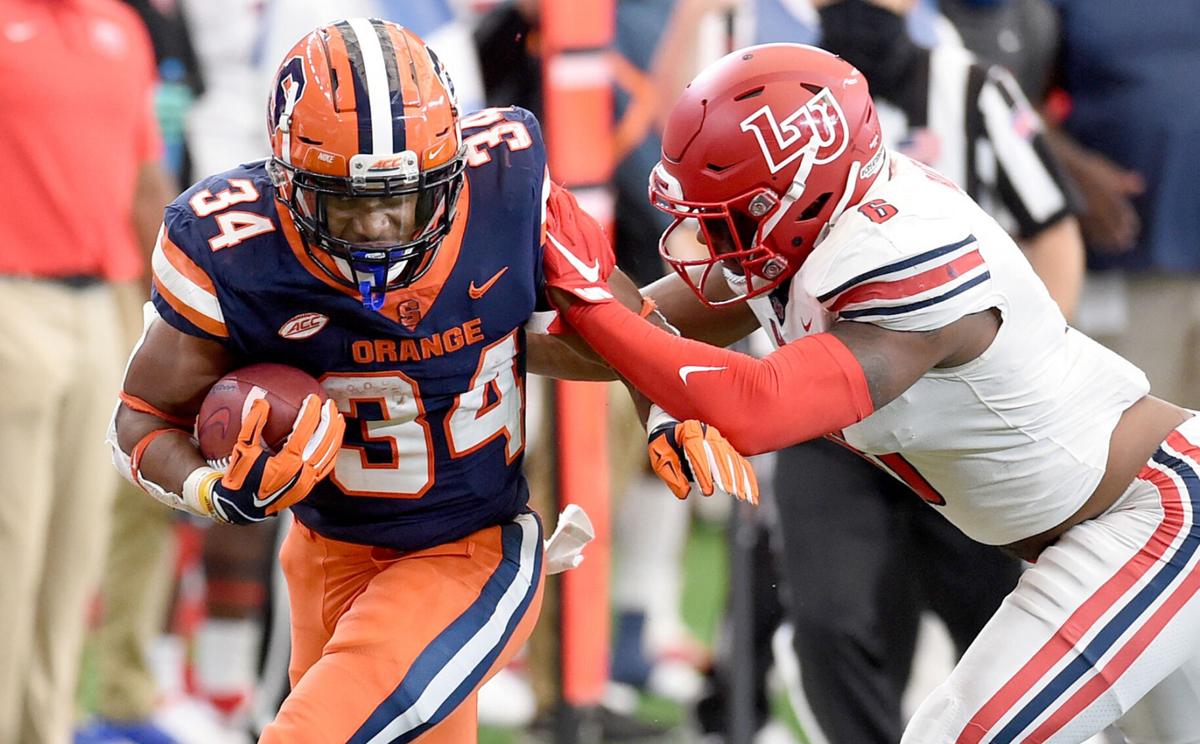 Syracuse running back Sean Tucker, left, gains yardage in the first half during a game against Liberty last Saturday at the Carrier Dome. Dennis Nett/Pool Photo-USA TODAY Sports 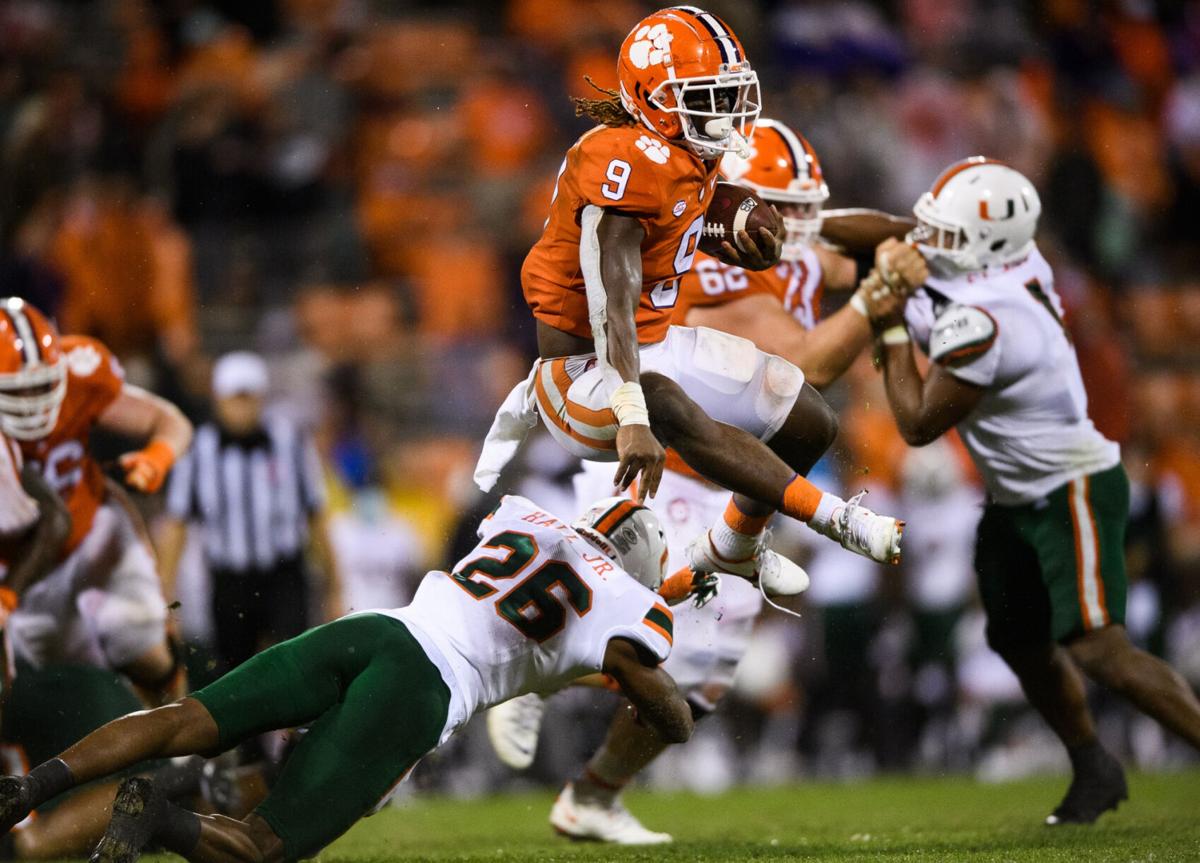 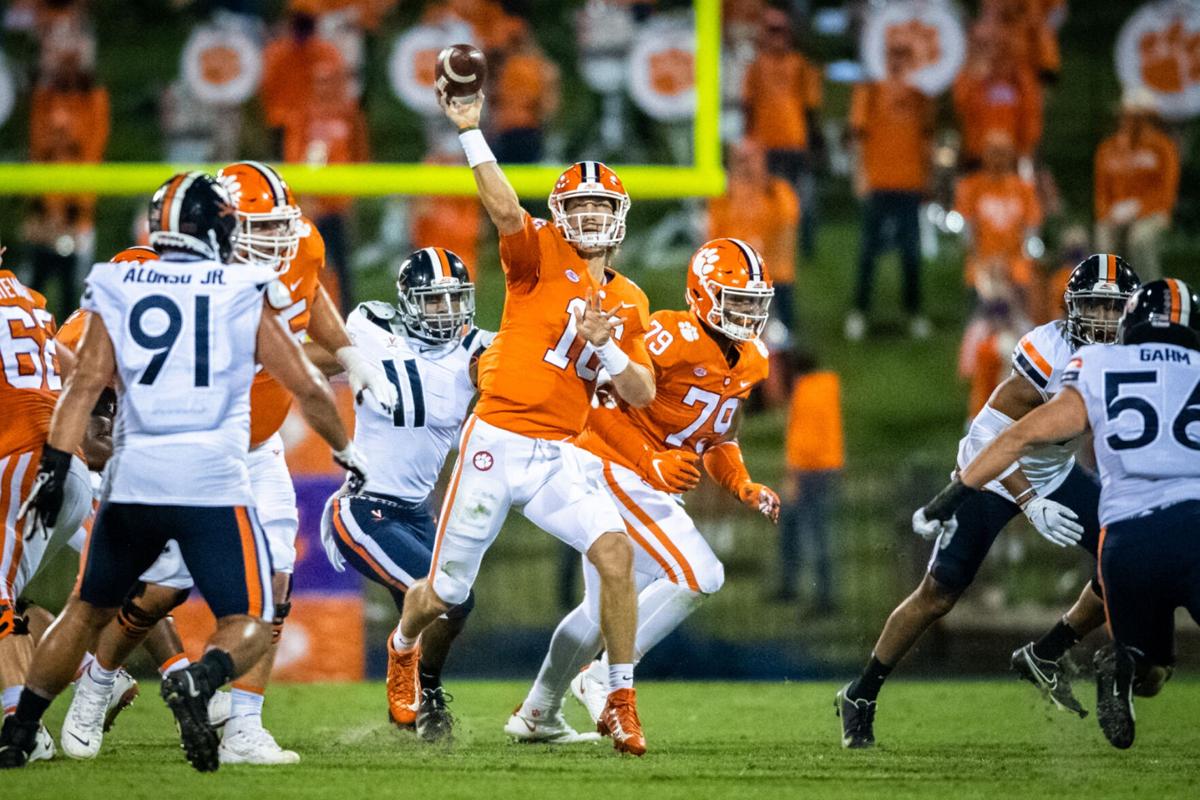 Syracuse running back Sean Tucker, left, gains yardage in the first half during a game against Liberty last Saturday at the Carrier Dome. Dennis Nett/Pool Photo-USA TODAY Sports

The year 2017 seems like a lifetime ago through the lens of the Syracuse University football team’s Atlantic Coast Conference series with Clemson.

The Orange (1-4 overall, 1-3 ACC) will enter today’s conference matchup against the top-ranked Tigers (5-0, 4-0) facing the largest odds in program history as a 46-point underdog. Kickoff is slated for noon at Memorial Stadium in Clemson, S.C., which is allowed a maximum of 19,000 fans due to COVID-19 restrictions. The game will be televised on ACC Network.

Syracuse is coming off a 38-21 humbling setback against FBS independent Liberty last Saturday as it prepares to challenge the unbeaten national juggernaut that cruised to a 73-7 win over Georgia Tech last week, including 52 first-half points, to establish a new program high against an ACC opponent.

The Orange is the last team to topple the Tigers in the regular season — claiming a 27-24 upset over then-No. 2 Clemson on Oct. 13, 2017, in the Carrier Dome. The Tigers enter with 34 straight regular-season wins and a program-record 26 straight victories at home.

“We’ve been underdogs before and we’ve been able to win this game in the past, so I think we’re excited for the challenge coming up this week,” said SU redshirt senior offensive lineman Airon Servais. “We’re definitely no strangers to being the underdog, so we’re just going to attack this week with a lot of effort and a lot of energy, and we’re going to get after them.”

Syracuse fifth-year coach Dino Babers has turned to several young backups in recent weeks as each unit works through a plethora of injuries. The Orange has started four freshmen on defense in each of its last two games, one shy of an all-time program high, while eight freshmen overall have started at least one game this year.

Through the first five games, 13 different SU players have made the first start of their respective careers, which is tied for the fifth-highest total of debut starters in the nation.

The top-ranked Tigers, meanwhile, have rolled to another unbeaten start behind one of the deepest and most experienced squads in the nation, led by a pair of Heisman Trophy candidates — quarterback Trevor Lawrence and running back Travis Etienne.

Lawrence came into the season with 6,945 career passing yards while Etienne entered with 4,038 career rushing yards, helping the Tigers become the third team in FBS history to return a 6,000-yard passer and 4,000-yard rusher.

The duo has kept its high-powered pace for Clemson, which ranks third in scoring offense at 48.4 points per game, and fifth in scoring defense, yielding just 12 points on average.

Lawrence leads the ACC and ranks second in the FBS with 15 passing touchdowns and his 1,544 passing yards are fourth nationally and tops the conference.

Etienne ranks 10th nationally with 150.8 all-purpose yards per game, including rushing averages of 87.2 yards per game and 6.5 yards per carry. He is Clemson’s all-time leading rusher with 4,474 yards and is approaching the ACC career rushing record of 1975 North Carolina State graduate, Ted Brown (4,602).

Etienne will now square off against the SU rush defense that has surrendered ground totals of 338 and 363 yards, respectively, in its last two games.

“Travis Etienne is the greatest back in the country right now, for sure,” SU senior defensive lineman Josh Black said. “We definitely need to lay the hammer on him, wrap up, and have the whole team run to him every play because he’s an amazing player and he’s definitely going to try to take it to the house on us.”

The previous high for a point-spread against SU’s favor, according to data from Phil Steele that dates back 45 seasons, was 38 points in 1983 at Nebraska. That game resulted in a Cornhuskers’ 63-7 victory.

“We can’t give into all that hype,” Black said. “We just have to go out there and play our tails off.”