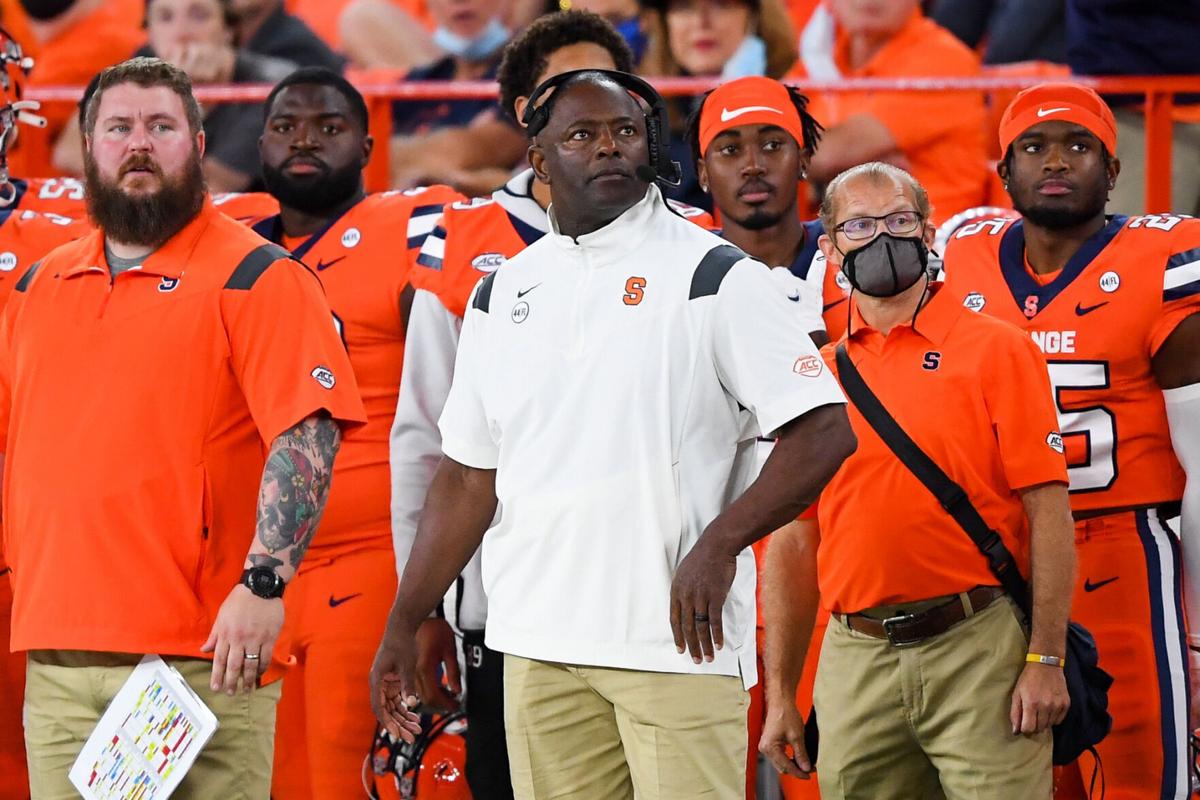 Syracuse head coach Dino Babers, center, looks on against Clemson during the second half Oct. 15 at the Carrier Dome. Rich Barnes/USA TODAY Sports 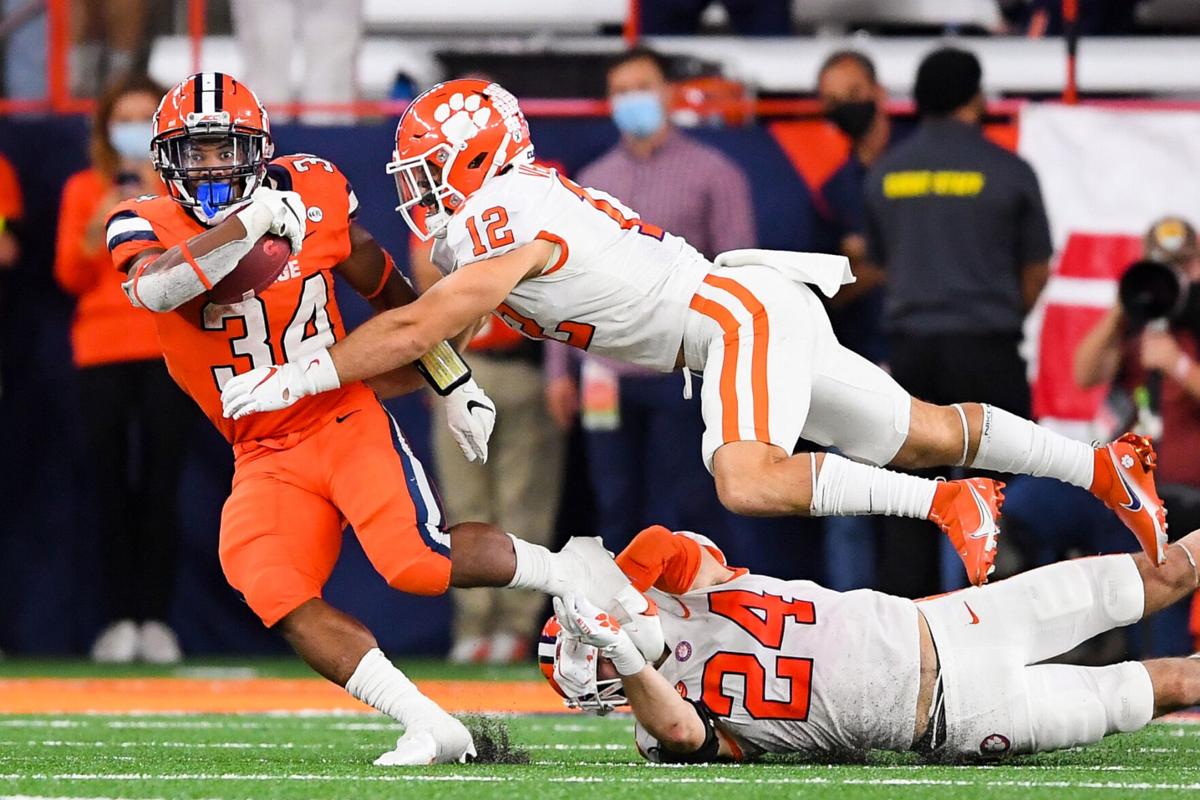 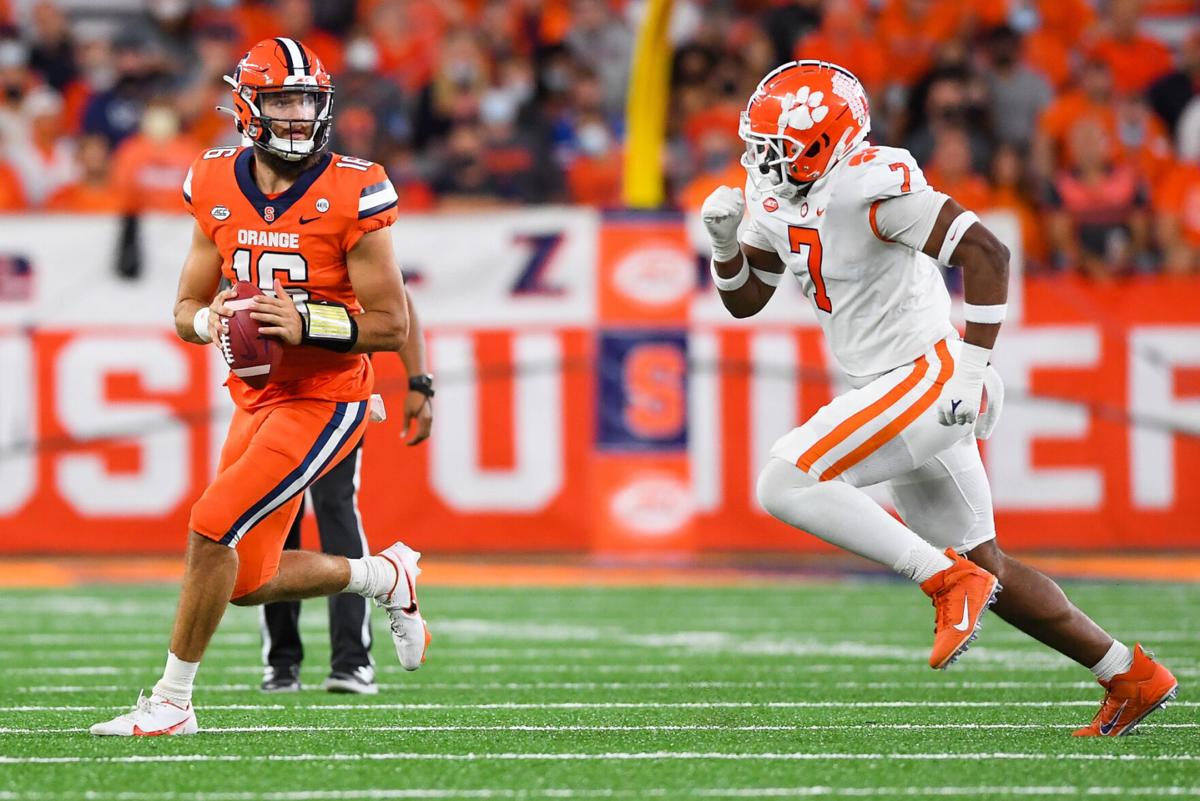 Syracuse head coach Dino Babers, center, looks on against Clemson during the second half Oct. 15 at the Carrier Dome. Rich Barnes/USA TODAY Sports

SYRACUSE — The Syracuse University football team needs to quickly overcome the recent series of deflating losses — the setbacks to Atlantic Coast Conference foes and departures to the NCAA transfer portal — at a critical juncture for its bowl aspirations.

Syracuse (3-4 overall, 0-3 ACC) will face Virginia Tech (3-3, 1-1) at 12:30 p.m. Saturday at Lane Stadium in Blacksburg, Va. The Hokies were listed as a three-point favorite on oddsshark.com for the ACC matchup between former Big East foes to be televised locally on the Yes Network.

The Orange is coming off three straight ACC setbacks decided by three points each, which combined with their last victory of 24-21 over Liberty on Sept. 24, marks the first time in team history with four straight games decided by a field goal or less.

“The tough times is what makes you,” SU coach Dino Babers said. “All the grass is being grown in the valley — it’s not growing on the top of the mountain. Like I’ve said, we’re going to rebound from this and it’s going to make these guys better.”

Syracuse will also take the field for the first time without former redshirt junior quarterback Tommy DeVito, who entered the transfer portal earlier this week four games after being replaced as the starter by Garrett Shrader.

Sixth-year offensive lineman Airon Servais said that he shared lunch with DeVito earlier this week and offered support for his former QB while expressing the urgency for the Orange to place its full attention on the next task.

Shrader’s ascension as starter has solidified SU’s transformation from the up-tempo, pass-happy offense to a run-first unit centered around AP Midseason All-American running back Sean Tucker, presenting a favorable formula for the Virginia Tech matchup.

The Hokies have the second-ranked pass defense in the ACC, surrendering just 197.5 yards per game, but ranks in the bottom six of the conference against the run, yielding 155.5 rushing yards on average.

Tucker enters ranked second nationally with 948 rushing yards, which is the best seven-game start in program history and is 52 shy of becoming SU’s first 1,000-yard rusher since Jerome Smith in 2012.

Tucker entered last week’s game against Clemson as the first RB from a power-five conference to record at least 750 rushing yards, 200 receiving yards, and 10 total touchdowns through six games since Heisman Trophy winner Reggie Bush in 2005.

“I don’t think it’s a shift (in philosophy), I think it’s a chess game and you’re just playing with your strongest pieces,” Babers said. “As your pieces change, your game should change. ... (Tucker) is something that doesn’t come along very often, and we need to use that.”

Virginia Tech, meanwhile, enters after consecutive losses and ranks last in the ACC for total offense with an average of 312 yards, and next-to-last in scoring offense at 21.7 points per game, which is also in the bottom 10 of the FBS.

The Hokies have leaned heavily on dual-threat QB Braxton Burmeister, who has thrown for an average of 178.5 passing yards to go with six touchdowns and is their leading rusher with 212 total yards.

The Orange is determined to end a 10-game ACC losing streak dating back to Sept. 26 last year and is seeking its first ACC road win since a 49-6 victory over Duke on Nov. 16, 2019. Syracuse is just 4-18 overall in ACC road games in six seasons under Babers.

“We can’t let these close losses week after week take its toll on us mentally,” Servais said. “We’re not unfamiliar with the situation that we’re in right now, so it’s really important to go out and get a ‘W,’ this weekend to change the feelings that we’ve had the last couple weeks.”

Syracuse will host Boston College at 3:30 p.m. on Oct. 30 in the Carrier Dome before its long-awaited bye week. SU will then return and play two of its final three games against ranked opponents with No. 18 North Carolina State and No. 23 Pittsburgh looming after a road game at Louisville.

Syracuse is expected to keep riding its rushing attack in a favorable matchup for success on the ground. The Tucker-Shrader tandem has led SU to average an ACC-leading 231.7 rush yards per game and they are tied for second in the league with 9 rushing touchdowns each.

Tre Turner has been the top receiving threat for Virginia Tech, ranking 16th in the ACC with 67.17 receiving yards per game on team-best 25 catches.

The Hokies rank second in the ACC in pass defense and third in defensive pass efficiency.

Virginia Tech has been assessed the fewest penalty yards (201) among all FBS teams, and the 23 penalties called against are the second least nationally.

SU holds a 10-8 edge in the all-time series, and this marks its first matchup since 2016, which resulted in a 31-17 win for SU over then-17th ranked Va. Tech in the Carrier Dome. SU is making its first trip to Lane Stadium since 2003 in their final clash as Big East foes.

His 948 rushing yards are the most for any SU back through seven games and he is on pace to surpass Joe Morris’ single-season team record of 1,372 rushing yards held since 1979.

He is second nationally in rushing yards per game (135.4), all-purpose yards average (167.4) despite not returning kicks, and total touchdowns (11).

Virginia Tech: CB, Jermaine Waller — The junior is tied for the FBS lead with four interceptions, and he joins Iowa’s Riley Moss as the only other player from a power-five conference with four INTs and a pick-six TD.

He leads the ACC with 67 INT return yards and was named the Pro Football Focus College CB of the Week on Oct. 11. He has seven career INTs, made All-ACC honorable mention in 2019 and missed most of 2020 due to injury.