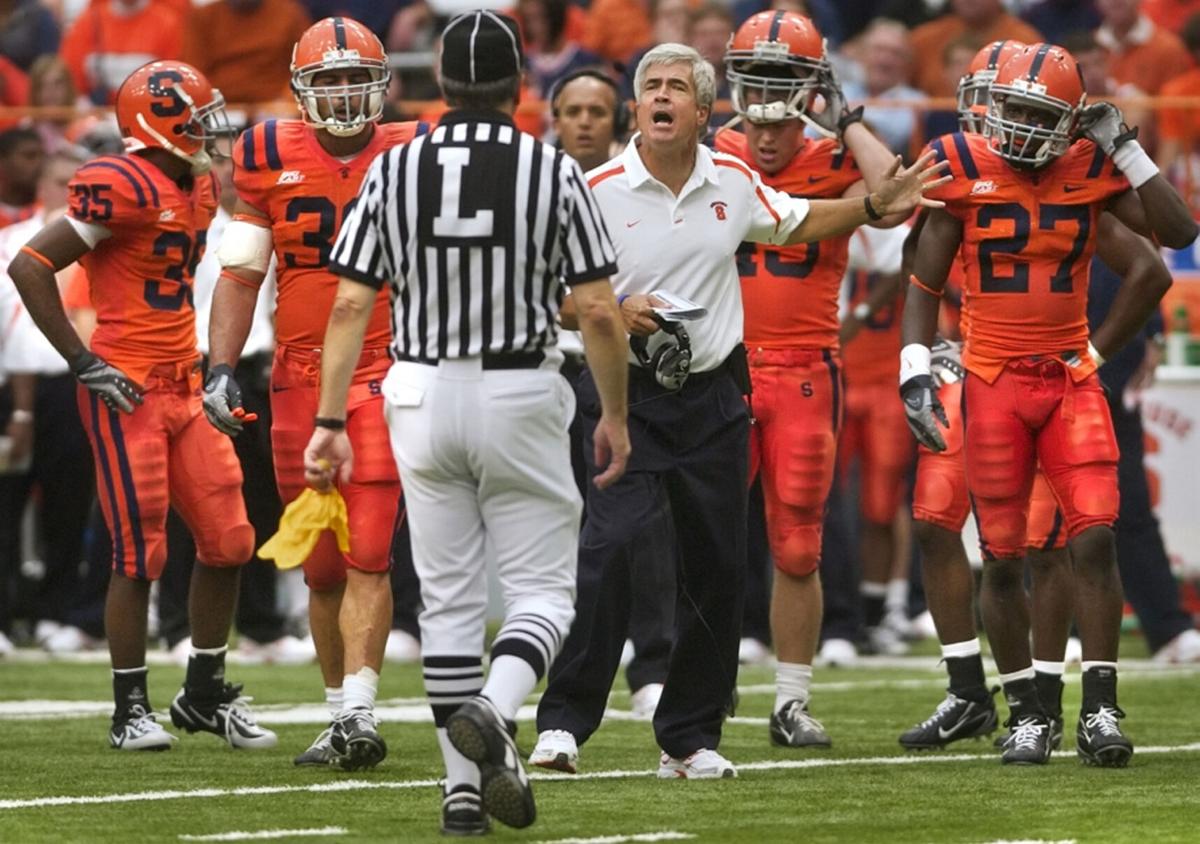 Syracuse head coach Greg Robinson argues a call during a game against Illinois in September 2006 at the Carrier Dome. Watertown Daily Times photo 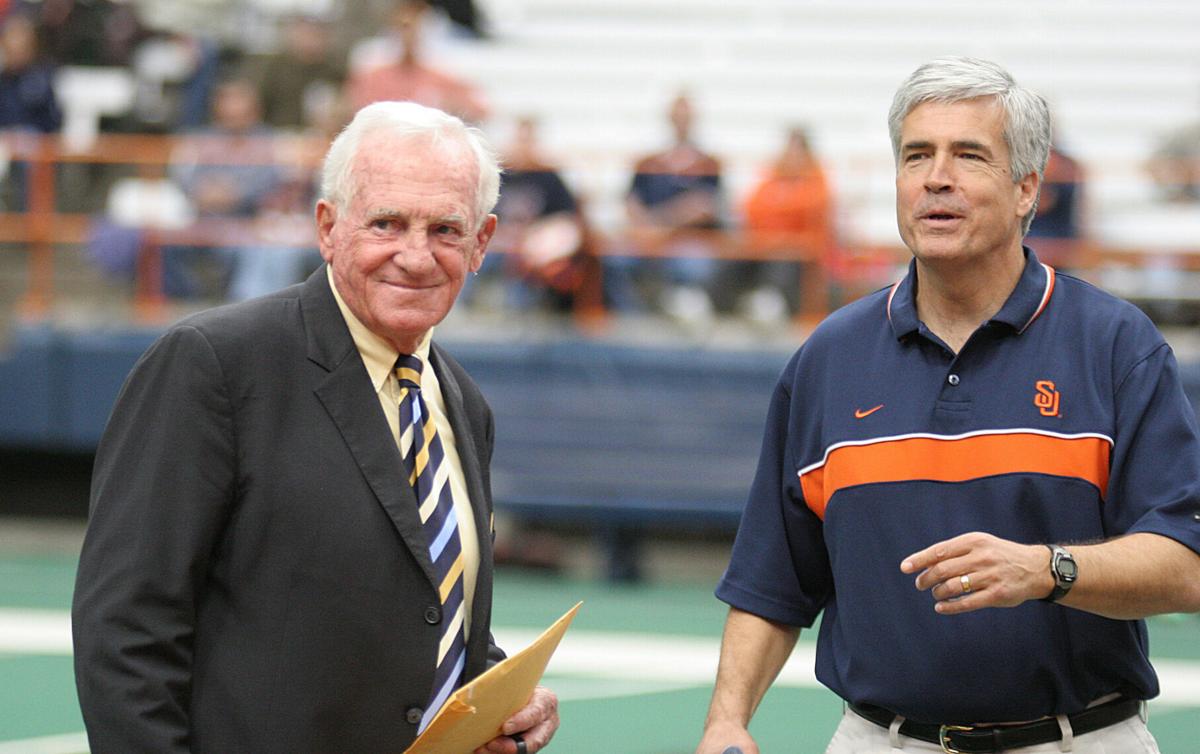 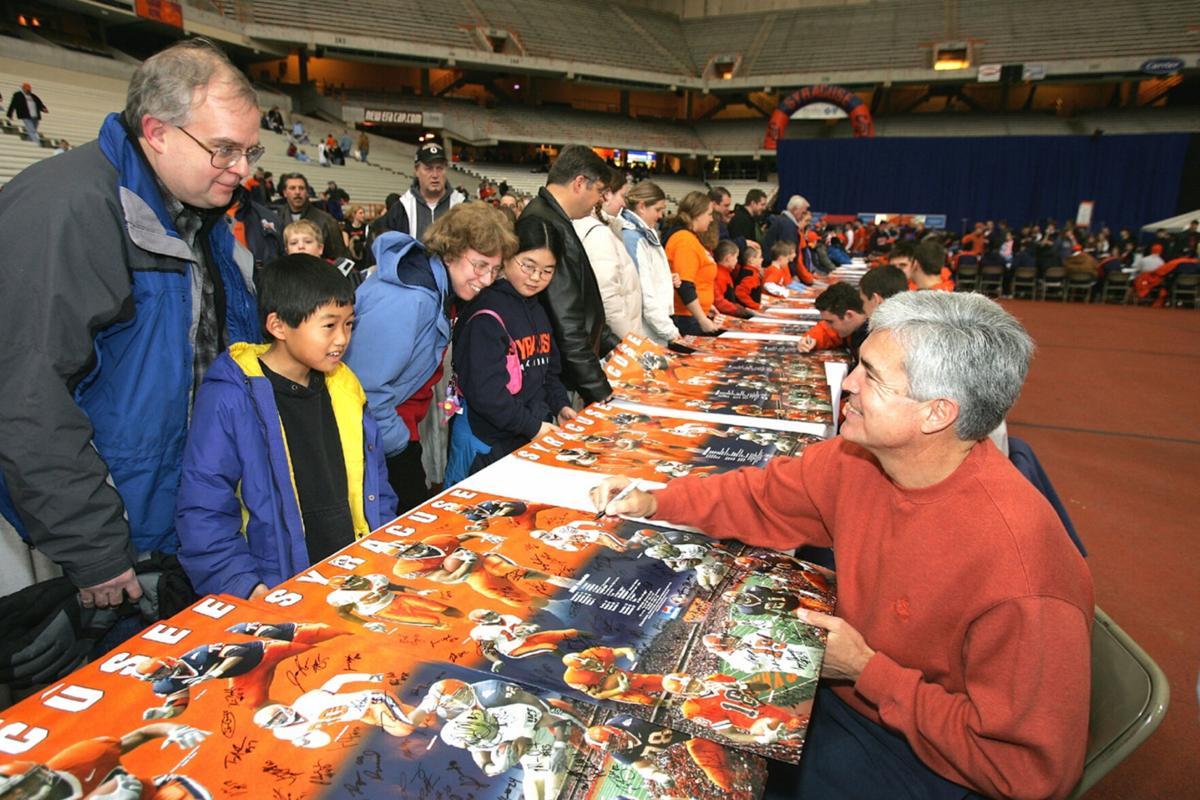 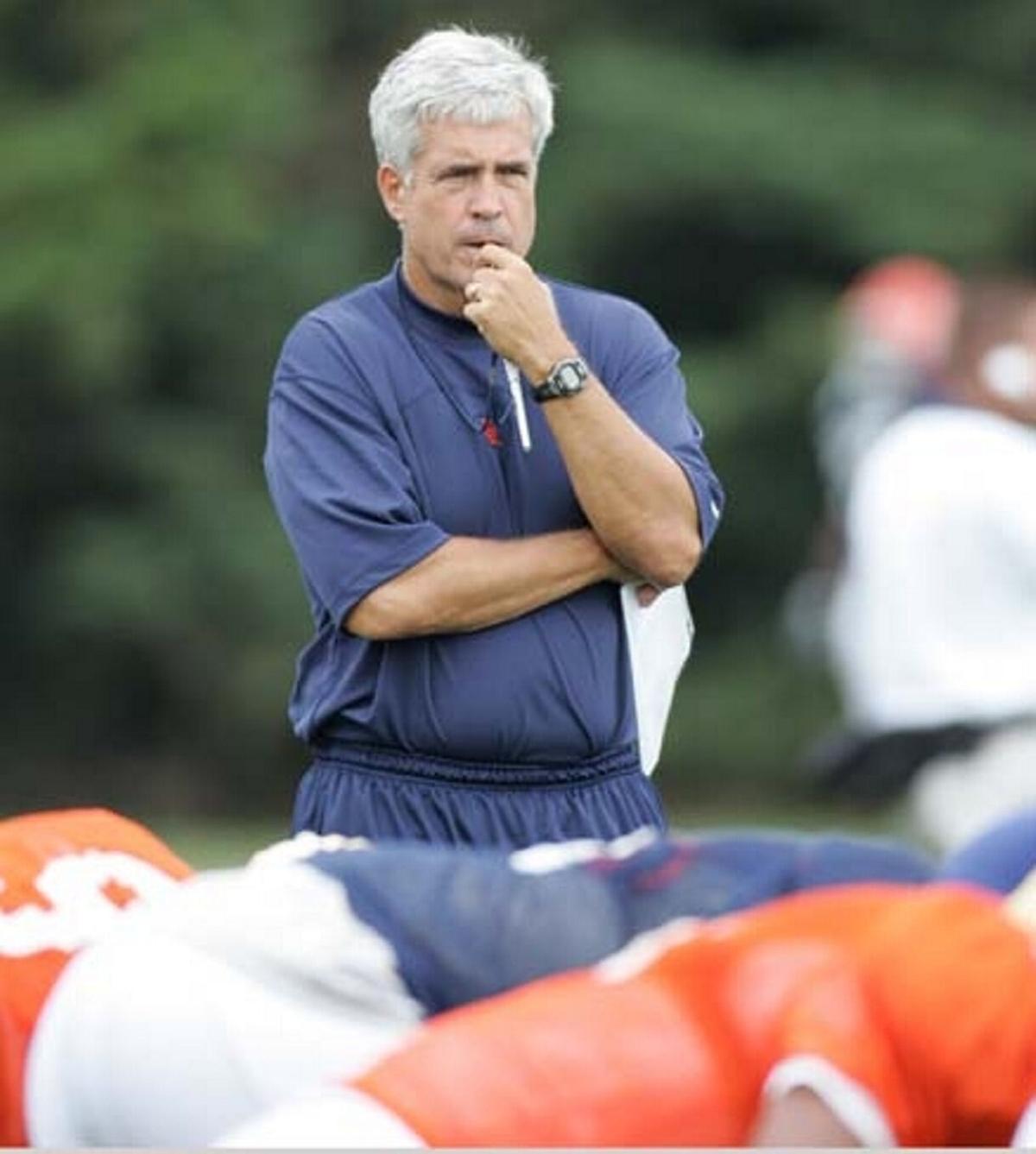 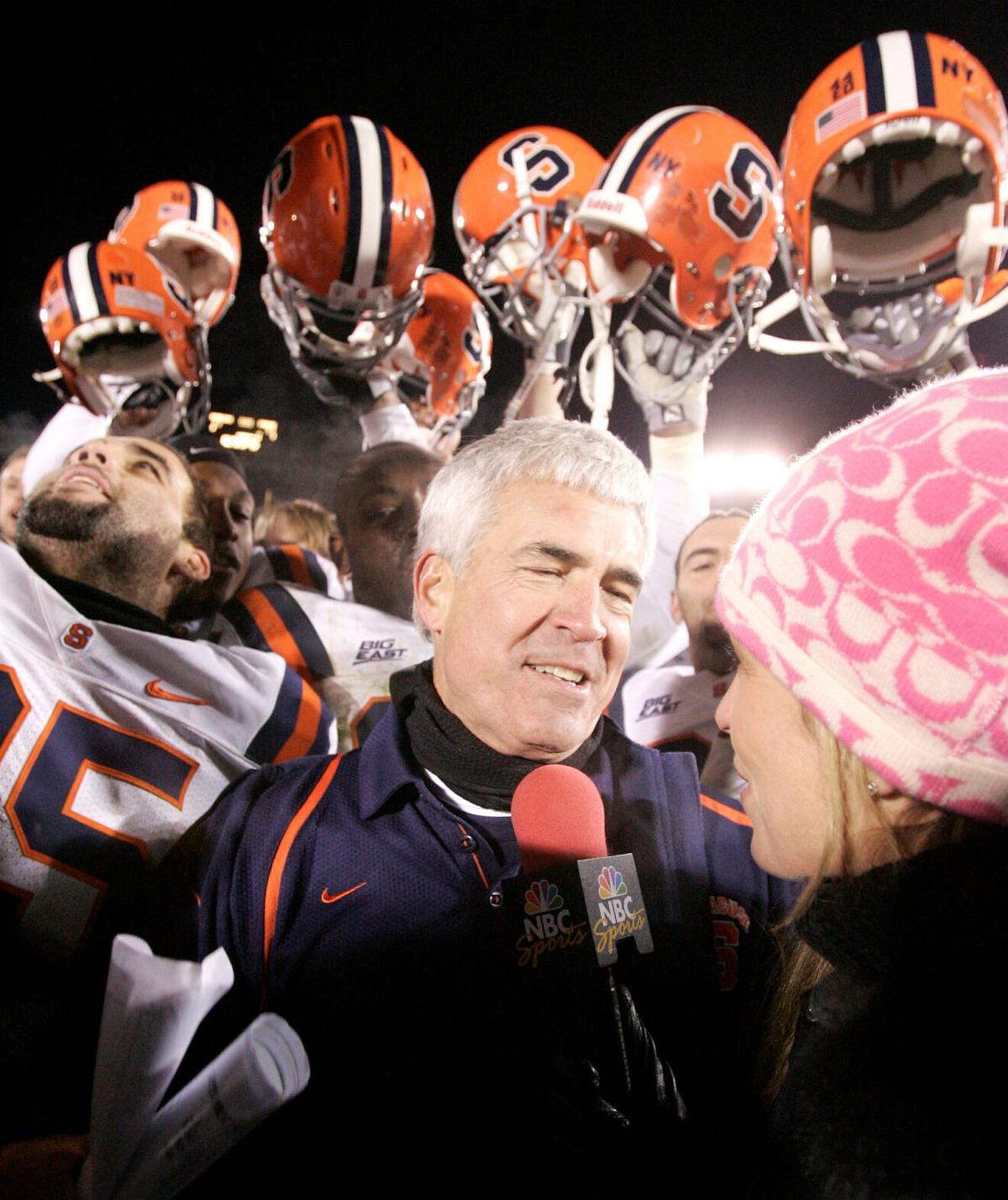 Syracuse football coach Greg Robinson is surrounded by his players during an interview following a win over Notre Dame on Nov. 22, 2008. Photo provided by Syracuse University Athletics

Syracuse head coach Greg Robinson argues a call during a game against Illinois in September 2006 at the Carrier Dome. Watertown Daily Times photo

Syracuse football coach Greg Robinson is surrounded by his players during an interview following a win over Notre Dame on Nov. 22, 2008. Photo provided by Syracuse University Athletics

The Syracuse University community and football world at large continues to mourn Greg Robinson following the announcement Wednesday that the longtime coach has died at age 70 due to complications from Alzheimer’s Disease.

Robinson guided the SU football team from 2005-08 as part of an enduring and influential coaching career that also included back-to-back Super Bowl championships as defensive coordinator for the Denver Broncos.

Robinson went just 10-37 as head coach of the Orange but was considered widely popular among his players and colleagues alike for his class and the poise displayed amid the struggles and in subsequent years regarding his SU tenure.

He was dismissed near the end of the 2008 season but allowed to coach the final two games, and SU promptly gained an upset victory at Notre Dame in the first of those outings to rally behind their leader for the signature win of his tenure.

“We’re saddened to learn of the passing of Greg Robinson,” Syracuse athletic director John Wildhack expressed in a written statement. “On behalf of the Syracuse Athletics family, we send our condolences and support to Laura and the entire Robinson family.”

Syracuse men’s basketball coach Jim Boeheim was among the hundreds of fellow NCAA and pro leaders to pay their respects to Robinson through social media over the past day and a half. Boeheim is a noted football fan and supporter of the Orange program.

“Juli and I send our good thoughts and prayers to Greg Robinson’s wife Laura, and their family,” Jim Boeheim stated on Twitter. “They did a lot of great work in our community when they lived here and we appreciated their friendship.”

Robinson made an appearance in Watertown in February 2006, speaking before an audience of local high school football players and coaches at the Italian-American Civic Association.

Robinson joined SU after a stint as defensive coordinator at Texas in 2004, helping produce an 11-1 campaign for the Longhorns and a victory in the Rose Bowl.

He previously coached in the NFL as a defensive coordinator for the New York Jets (1994), the Denver Broncos (1995-2000) and Kansas City Chiefs (2001-03). The Broncos released a statement Wednesday expressing condolences to the Robinson family on behalf of the franchise.

After his SU tenure, Robinson also went on to serve as defensive coordinator at Michigan (2009-10), and a second stint at Texas (2013) before wrapping up his coaching career at San Jose State (2014-15).

Former colleagues from nearly every stop, including Mack Brown and Rich Rodriguez as coaches, and players like Bill Romanowski and dozens of others have publicly expressed their gratitude for having spent time alongside or under his tutelage.

“So very sad to hear of Greg Robinson’s passing,” tweeted Pro Football Hall of Fame safety, Ronnie Lott, who played for the Jets under Robinson in 1994. “Amazing man. Our time together with Pete Carroll and the Jets was special, a brotherhood, sending all good thoughts to his family.”

Media members who worked closely with Robinson, from those around Syracuse to national columnists like Woody Paige, have also taken time to tribute Robinson.

Paige, for example, wrote about how Robinson attended Oscar parties at his house while he worked for the Broncos, among other fun memories that showcase Robinson’s likeable nature in a column for the Colorado Springs Gazette.

Robinson is survived by his wife, Laura, along with three children and six grandchildren.

“So sorry to hear about the passing of Greg Robinson,” Syracuse mayor Ben Walsh posted to Twitter. “From the young men he coached and cared for, to his amazing family including my good friend, Dom, he leaves behind a legacy of servant leadership and benevolence that will live on here in Syracuse and far beyond. RIP Coach.”