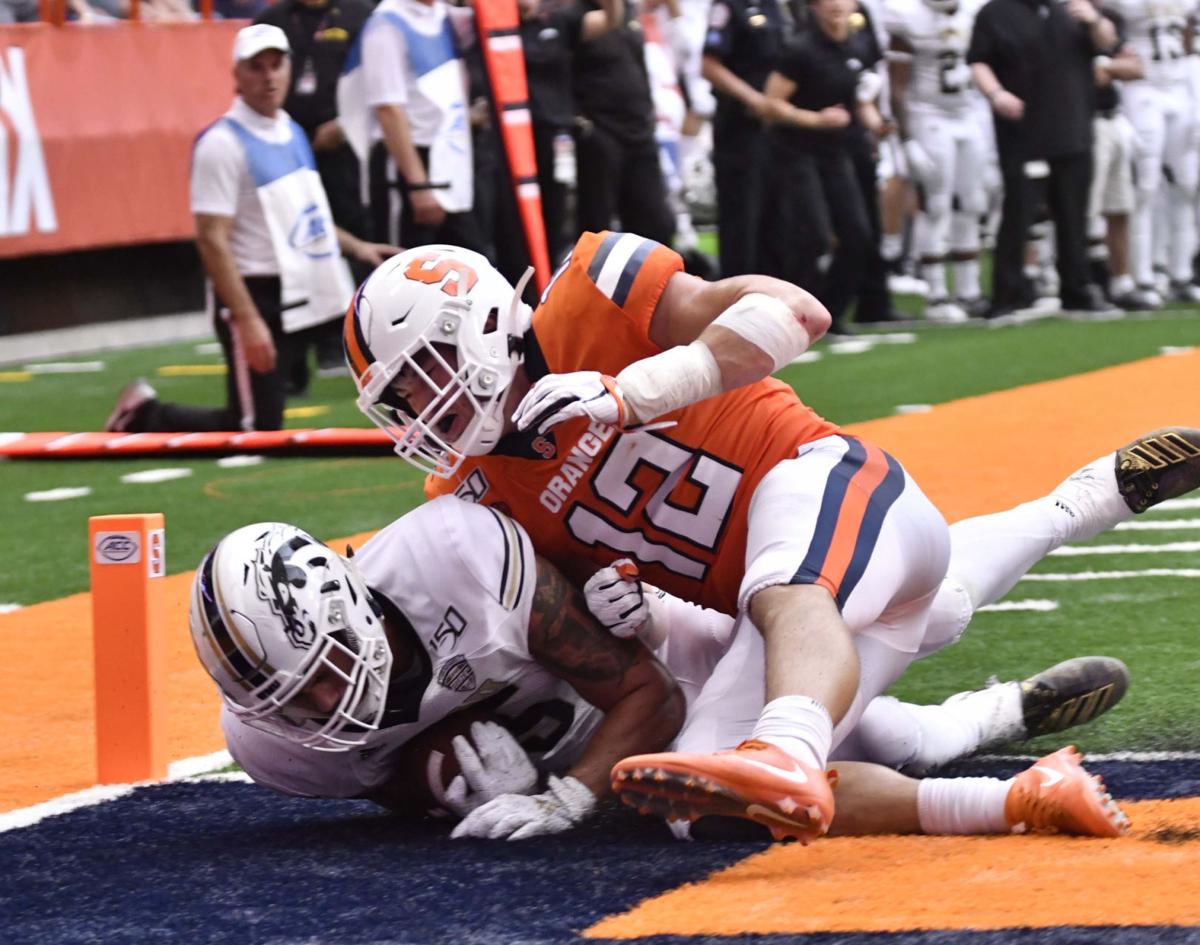 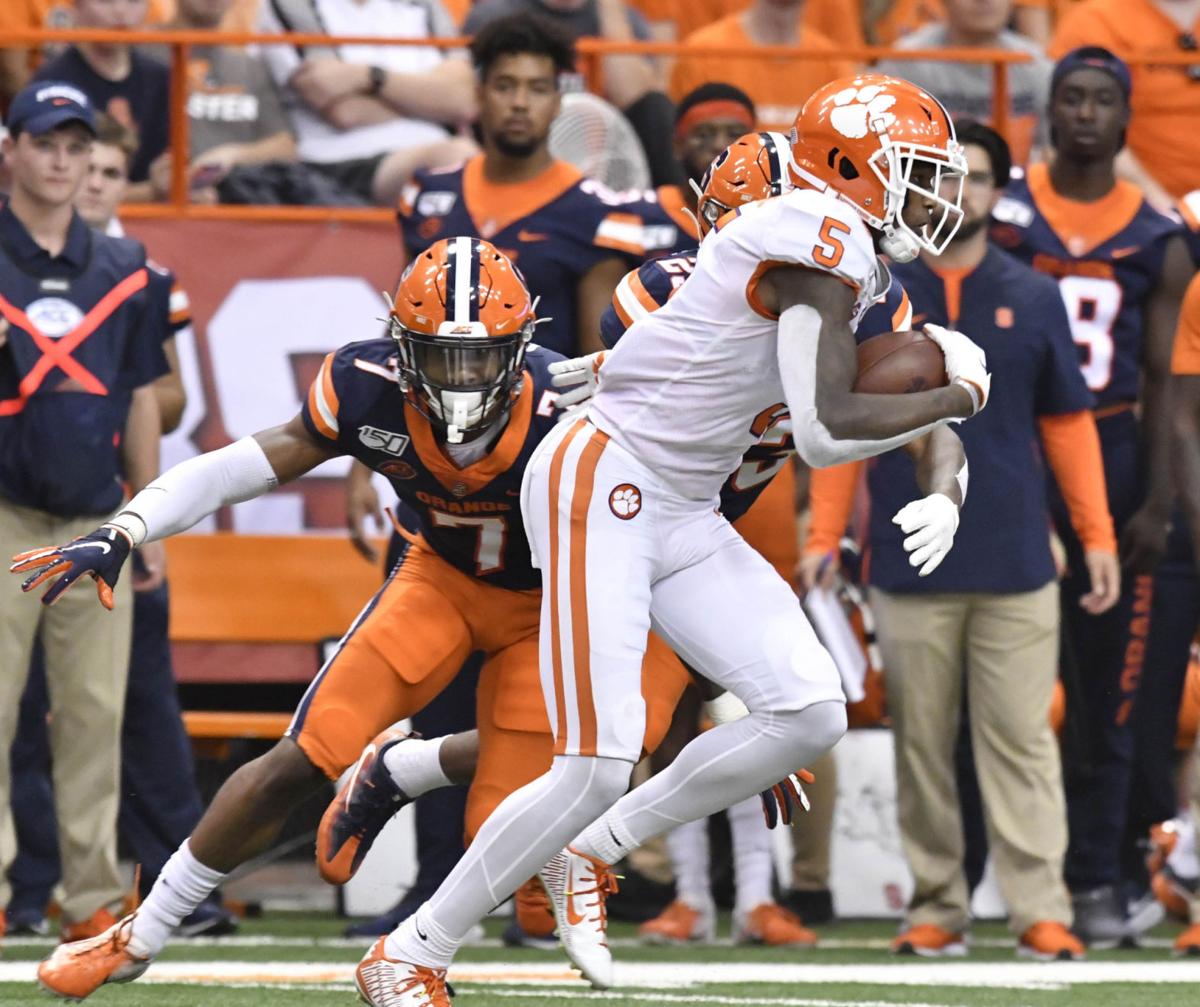 Clemson wide receiver Tee Higgins runs past Syracuse defensive back Andre Cisco after making a catch during a game on Sept. 14 at the Carrier Dome in Syracuse. Mark Konezny/USA TODAY Sports 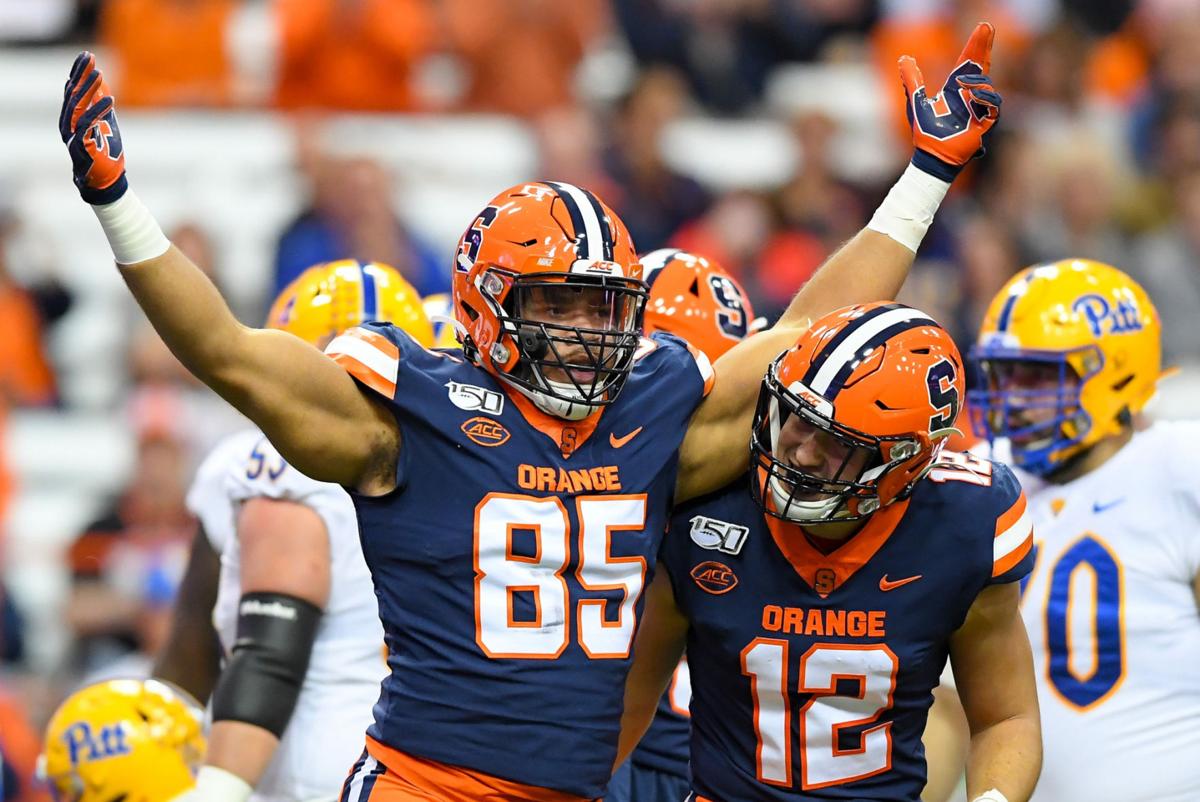 Clemson wide receiver Tee Higgins runs past Syracuse defensive back Andre Cisco after making a catch during a game on Sept. 14 at the Carrier Dome in Syracuse. Mark Konezny/USA TODAY Sports

SYRACUSE — Syracuse University football coach Dino Babers emphasized the need to “see something different,” when he fired former defensive coordinator Brian Ward last week, and while key players expressed disappointment Tuesday during their first public appearance since the dismissal, the unit conveyed a collective urgency to produce the desired results.

Ward was relieved of his duties as defensive coordinator and linebackers coach on Nov. 3, and defensive ends coach Steve Stanard promoted to guide the unit for the remainder of the season. The coaching change came one day after the Orange yielded a team-record 496 rushing yards during a 58-27 loss to Boston College for its fourth straight setback entering last week’s bye.

“I feel that guys have been handling adversity well all season,” said SU sophomore safety Andre Cisco, who was one of many defensive starters that Ward played a primary role in recruiting. “It comes with it, and it’s unfortunate what had to happen with coach Ward, but we have to keep moving on.”

Babers expressed the personal angst associated with the decision during his first press conference since the announcement earlier this week.

Ward had guided the defense during each of Babers’ four seasons at SU, and also served as DC/linebackers coach under Babers in 2015 at Bowling Green. Their respective families had grown close and Babers said the decision “hurt deeply,” but he believed it to be the best time to provoke change.

SU entered its bye week ranked No. 115 in the FBS in total defense and 91st in scoring defense.

“I think the big thing that we’re trying to get is change,” Babers said. “I thought that we weren’t moving in the direction that we needed to be based on that last thing that I saw. It wasn’t one thing, it was an accumulation of things that I’m not going to get into because unlike other professions, when something like this happens, it’s extremely personal.”

Babers informed the team of his decision during a brief and honest meeting that day, according to each side involved. Senior linebacker Andrew Armstrong — SU’s second-leading tackler (65) — said that the announcement came as a shock to some but they don’t plan to dwell on the circumstances.

“It was hard for me,” Armstrong said. “Coach Ward was the guy that recruited me, so obviously I had a strong relationship with him, and I kind of took the news a little hard. But we’ve got three games left to play, have to move on and focus on Duke. ... That’s life, you have to move on and adapt, and that’s what we’re doing getting ready for Duke.”

The unit should look similar schematically under Stanard, according to defensive players available to the media Tuesday. Stanard is in his third season as SU’s defensive ends coach and the former mid-1980s Nebraska standout has coordinated seven different FBS defenses over the past 20 years, most recently at Wyoming from 2014-16 prior to joining the Orange.

“We just believe in coach Stanard and everything that he’s going to do, just having the experience with him from when I used to play defensive end, I trust him with everything and he’ll do a great job,” SU redshirt junior defensive lineman Josh Black said.

“We’ve been dealing with adversity all season, and this is just another bump in the road that we’ll try to overcome like everything else,” he added.

SU senior linebacker Andrew Armstrong was named one of 20 national semifinalists for the third annual Jason Witten Collegiate Man of the Year Award on Wednesday.

The group was chosen by a committee that seeks to reward those who “demonstrated a record of leadership by exhibiting exceptional courage, integrity, and sportsmanship both on and off the field.”

Armstrong has played in 46 career games, making nine of his 10 career starts this season, and has registered 139 tackles, seven tackles for loss, three fumble recoveries and two interceptions.

He also serves as treasurer for SU chapter of Uplifting Athletes and is a member of SU’s leadership counsel. Armstrong, a Type 1 diabetic, is also an ambassador for the CNY chapter of Juvenile Diabetics Research Foundation and is a frequent speaker at their events.

The three finalists will be announced on Dec. 16 and the winner will be recognized during a ceremony next February at The Star in Frisco, Texas.

SU has been represented by a semifinalist in each of the award’s three years of existence. Armstrong joins former linebackers Zaire Franklin (2017) and Kielan Whitner (2018) in the exclusive company.

SU redshirt junior wide receiver Trishton Jackson was one of five players added to the Biletnikoff Award Watch List earlier this week. Jackson joins SU senior wide receiver Sean Riley on the watch list for the honor presented annually to the nation’s most outstanding receiver, regardless of position.

Jackson entered this week’s games tied for the conference lead with eight receptions of 30-plus yards, including a league-best four TD catches of 40 yards or more.

The ACC announced this week that the SU-Louisville matchup on Nov. 23 will kick off at 4 p.m. and be televised on the ACC Network.

SU also announced this week that 2020 season tickets are on sale and up for renewal at the SU athletics website, by calling 888-Dome-Tix, or visiting the Dome Box Office located at Ensley Athletic Center in Syracuse.