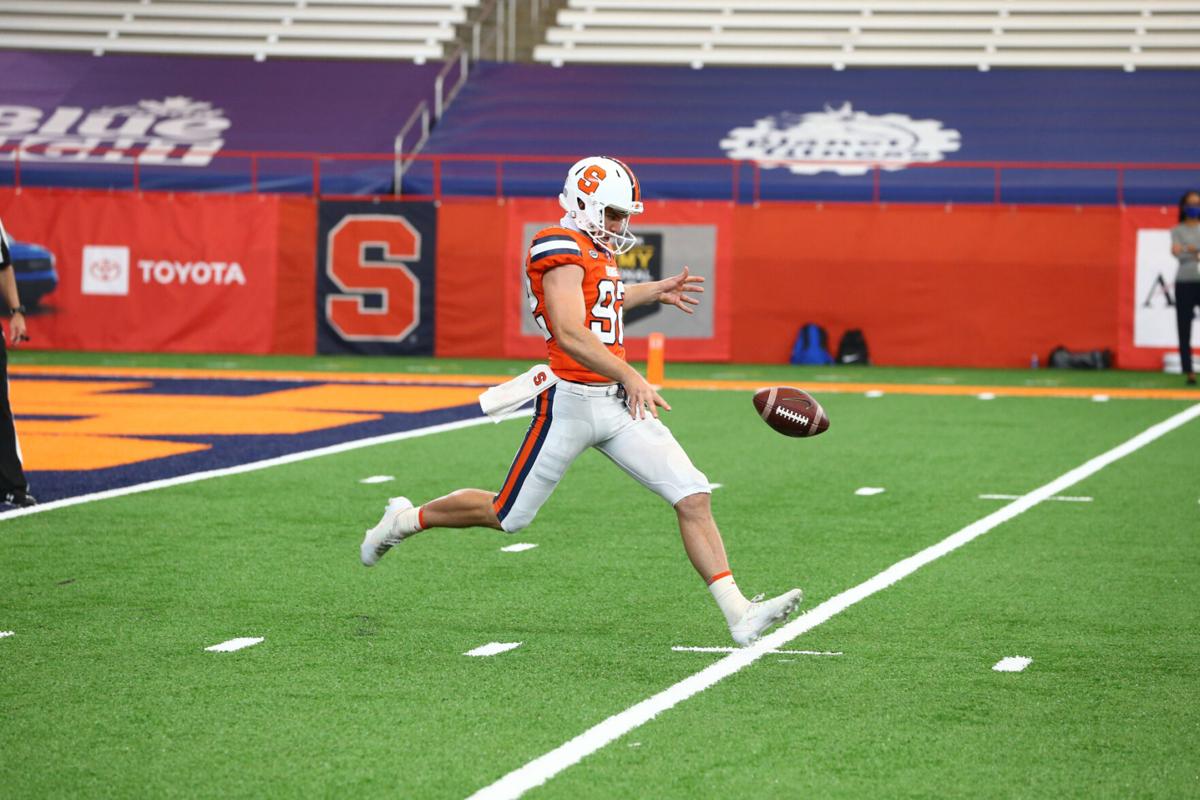 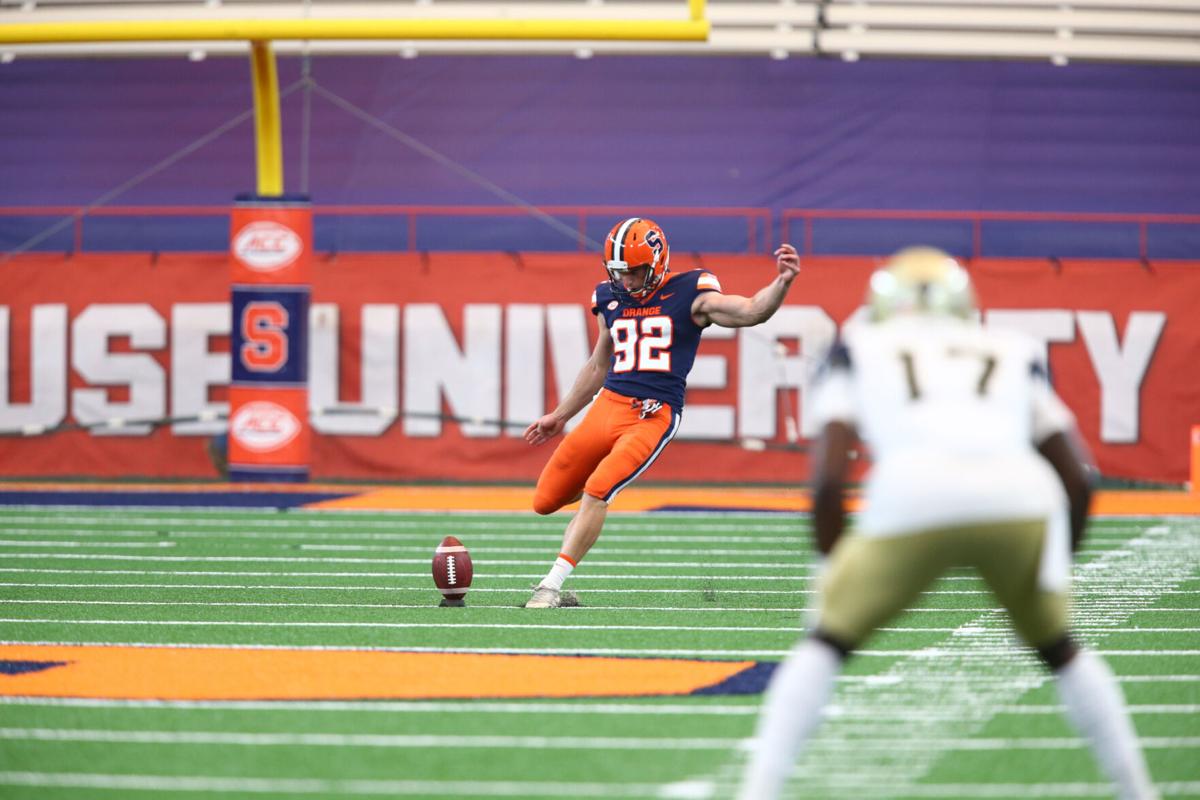 Syracuse’s Nolan Cooney kicks off during a game against Georgia Tech on Sept. 26 at the Carrier Dome. Michael J. Okoniewski/Syracuse University Athletic Communications. 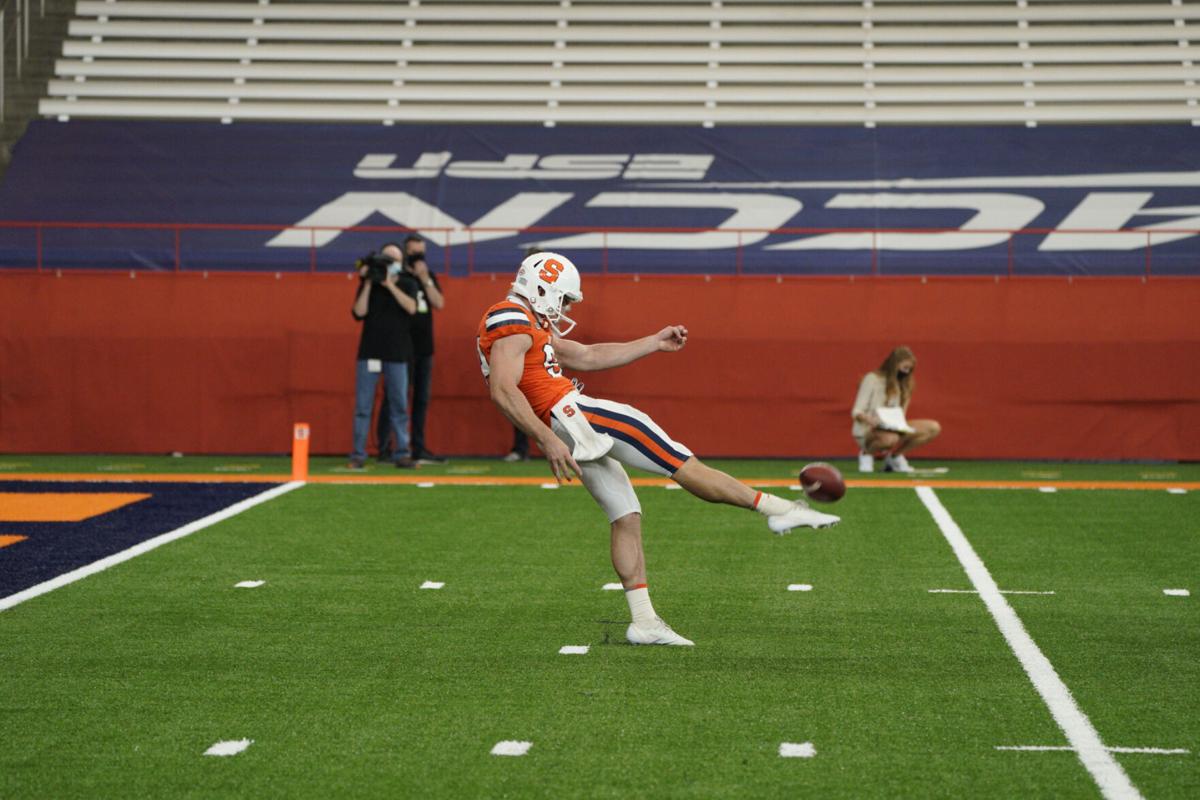 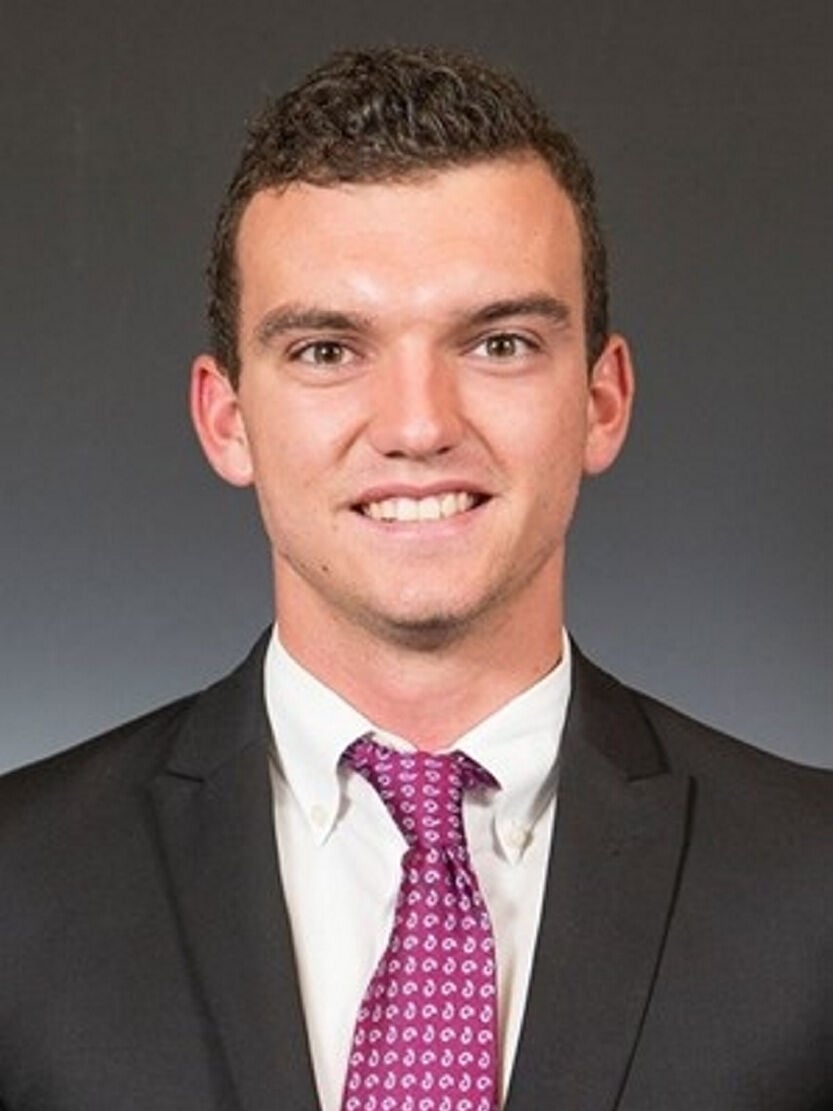 Syracuse’s Nolan Cooney kicks off during a game against Georgia Tech on Sept. 26 at the Carrier Dome. Michael J. Okoniewski/Syracuse University Athletic Communications.

Nolan Cooney made the decision to attend his first kicking camp during a conversation with his dad after receiving treatment for testicular cancer as a teenager.

That led the Syracuse University redshirt senior — cancer-free since his junior year of high school — to a football scholarship that was secured this past spring and a potential future as the Orange’s next punter to reach the NFL.

Cooney ranks 15th in the FBS with an average distance of 45.3 yards per attempt among punters who have played at least two games this season. His performance will play a key role in field position when Syracuse (1-7 overall, 1-6 Atlantic Coast Conference) faces Louisville (2-6, 1-6) at 7 p.m. Friday at Cardinal Stadium in Louisville, Ky., to be televised on ESPN.

Cooney joined SU as a walk-on in 2016 and was officially placed on scholarship by SU fifth-year coach Dino Babers this past spring. He is expected to complete his master’s degree in marketing next semester.

“I think it was for me, a chance to showcase my ability, it was the belief that coach Babers had in me and the other coaches on this staff,” Cooney said of the scholarship. “It was a great opportunity that they presented me and it’s something that I’ll appreciate forever.”

Cooney was a three-sport standout and a soccer goalie, who started kicking the football as a hobby, which increased while he was home frequently as he went through chemotherapy in high school. Following a treatment session, Cooney said that his dad suggested the camp to see where his budding ability stacked up against his peers, so he signed up for a spot in Worcester, Mass., near his hometown of East Greenwich, R.I.

“I had showcased some sort of ability to punt the football, the kicking wasn’t great, and from there I thought that there was an opportunity to pursue this at the next level,” Cooney said.

Cooney later attended one year of prep school at Bridgton Academy in Maine and served as the football team’s primary punter and kicker before walking on to the Orange the following season.

Cooney credited his parents — Joseph and Janice, the latter of whom attended SU — for helping him through treatment and into his football future.

“They’re the best support system you could ever have, often times you feel they’re going through more of the pressure than you are,” Cooney said. “You can see them and they’re feeling really stressed out about the process, but as long as I kept a positive mind-set, I think that they often felt the same way, and they often knew how I was feeling better than I was.”

Cooney was on the roster when classmate Rex Culpepper endured testicular cancer in 2018 and said that while he was available to talk, he admired the way the quarterback approached his diagnosis and said the two went through different experiences during their respective treatment.

Both players are cancer-free and have been presented the Jim DaRin Courage Award by SU athletics.

“Rex is an incredibly competitive guy and he’s going to attack that every day,” Cooney said. “He didn’t need a ton of advice from me because he’s as strong as anybody.”

Babers described Cooney as a mature guy with a steadying presence and said the two have had deep conversations throughout an often-times trying campaign.

“He’s a fantastic guy, a good leader, and we’ve been really lucky to have him back this year because I think he was a calming effect not only on the football field, but in the locker room as well,” Babers said.

Cooney has also served as kickoff specialist and the holder on field goals and extra points throughout his SU tenure. He played the understudy role for his first three seasons to Sterling Hofrichter, who was selected in the seventh round of the 2020 NFL Draft by the Atlanta Falcons and has been their starting punter for the duration of his rookie season.

If Cooney eventually decides to enter the 2021 NFL Draft — he could return to SU with a year of NCAA eligibility remaining per the NCAA’s waiver for this year due to COVID-19 — he would be aiming to become the third Orange punter to be drafted in the last five years.

Riley Dixon was taken in 2016 following a standout SU career, and the Syracuse Christian Brothers Academy product is now the starting punter for the New York Giants. He booted a 71-yard punt last Sunday to mark the second-longest in the NFL this season.

“I’ve been so lucky to learn from Sterling, who was really a great mentor, not necessarily always picking his brain but watching to see what he does,” Cooney said. “The way he goes about practice, how he goes through preparation for a game, those are the things you can really pick up on and I think ultimately led to me being in this position to be able to punt at a high level and have a lot of confidence in myself.”

Babers confirmed Monday that the SU football team completed its first wave of COVID-19 testing this week without a positive result for any of the 160 players and staff members tested. The team is tested three times per week during the regular season to comply with ACC protocol.

The SU men’s basketball team has been on pause since Sunday due to a pair of positive tests, including head coach Jim Boeheim, and two ACC football games for this week had been postponed as of Wednesday due to the coronavirus.

“We’ve been good for a real long time when it comes from the football end of it,” Babers said. “It’s so rapid out there and it’s increasing, it’s unfortunate that that happened, but right now in the football program, we’ve really been blessed, and we haven’t had any of those issues.”

Games scheduled between Duke-Wake Forest and Miami-Georgia Tech for this weekend were postponed. Syracuse is one of only four ACC teams since the start of the season that has yet to have a game rescheduled due to COVID-19 issues, joining Boston College, Florida State, and Clemson.

JONATHAN UP FOR MOY AWARD

Syracuse senior defensive lineman Kingsley Jonathan was recently named a semifinalist for the Jason Witten Man of the Year Award.

The native of Lagos, Nigeria, is one of 20 national semifinalists for the award that recognizes a player’s leadership on and off the field.

Jonathan is one of 15 NCAA athletes with voting power on NCAA rule changes and is one of five members of the ACC Search Advisory Committee to help select the next ACC commissioner.

He founded the Syracuse Hoodie Drive last winter to provide sweatshirts for homeless people in the area, donates time at the Golisano Children’s Hospital, and serves on the new Diversity and Inclusion Student-Athlete Board at SU.

The game times and TV information for all ACC games scheduled for the week of Nov. 28 were placed under a six-day hold and will be announced after Saturday’s games are completed.

Syracuse is scheduled to host North Carolina State on Nov. 28 in the Carrier Dome for its last home game of the season.