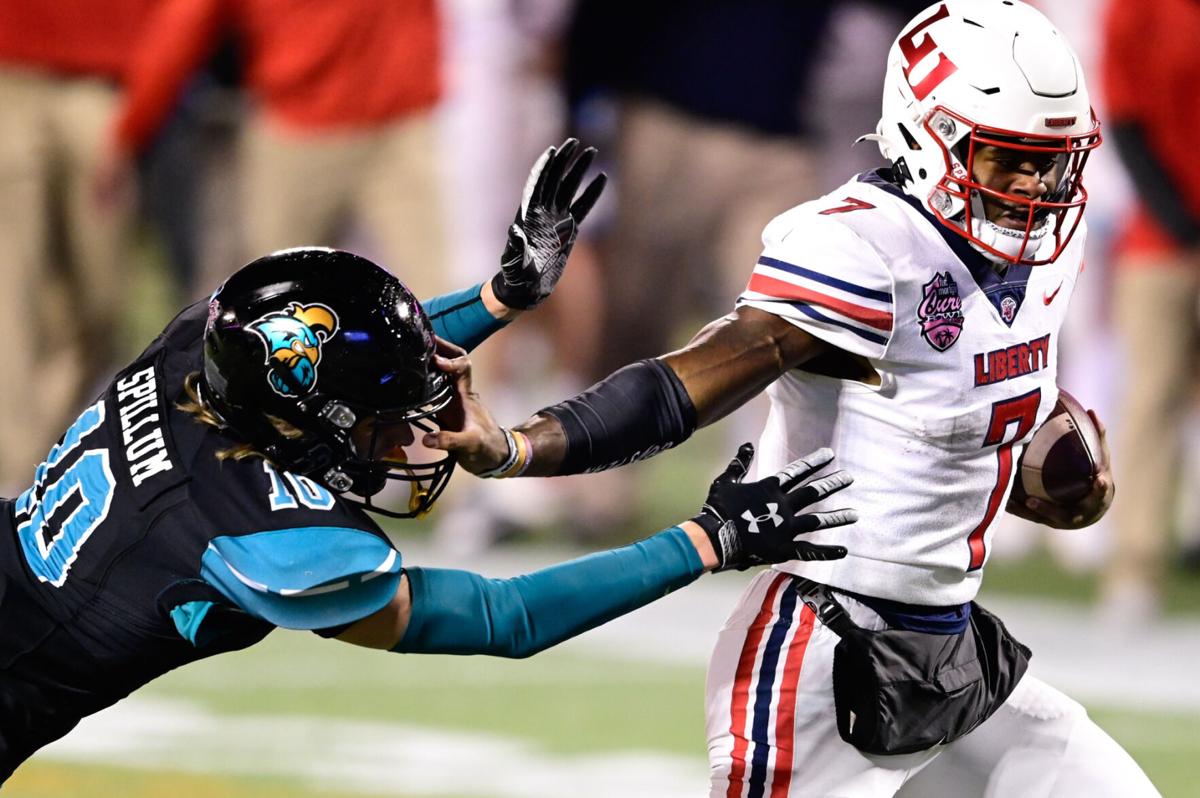 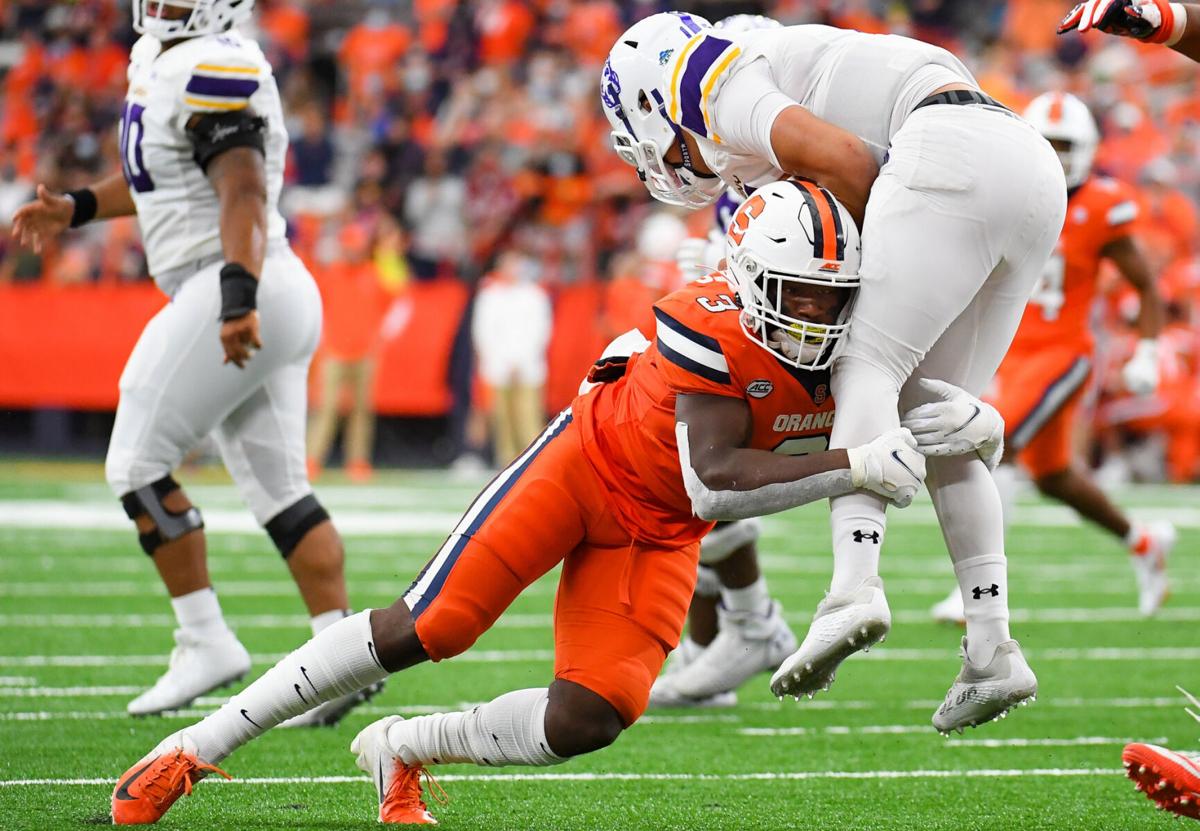 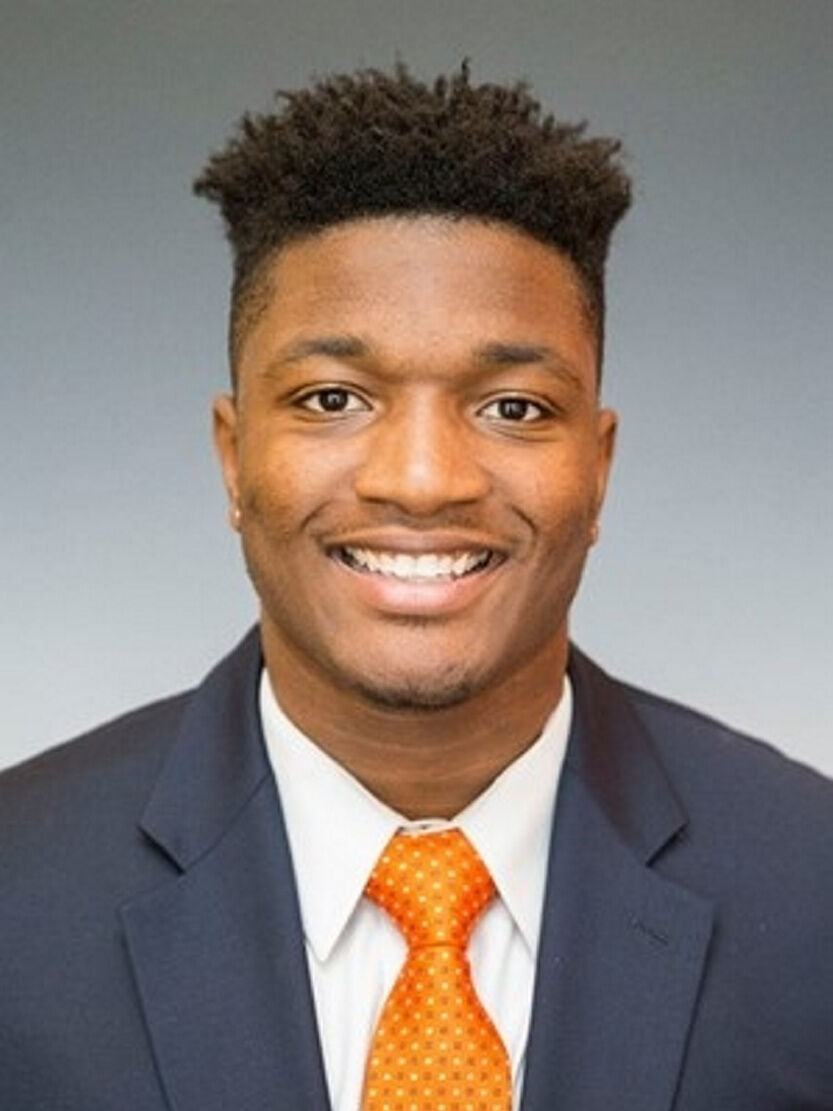 SYRACUSE — The attention will shift from the Syracuse University football quarterback competition to the matchup against the opposing signal-caller Friday night in the Carrier Dome.

The Orange (2-1 overall) will host the FBS Independent Liberty Flames (3-0) at 8 Friday in the Dome to complete their nonconference schedule. Syracuse is listed as a 6-point underdog on oddsshark.com for the outing to be televised on the ACC Network.

All eyes are expected to be on Liberty dual-threat quarterback Malik Willis and how the first-round NFL draft prospect fares against SU’s surging defense.

“He’s a quarterback that can throw the football, he throws a good deep ball and a good short ball, but he runs so strong,” sixth-year SU coach Dino Babers said of Willis earlier this week.

“I’m not going to call him a running back because he’s not, but god, he does not run like a running quarterback,” Babers added. “He’s better than that, very strong and very physical.”

Willis is on the watch list for nearly every major award for quarterbacks and top players, including the Walter Camp Player of the Year, Johnny Unitas Golden Arm, and the Manning Award.

The 6-foot-1, 225-pound redshirt junior sensation is rated as the No. 3 QB and within the top 15 prospects overall in the 2022 NFL draft by ESPN’s Mel Kiper Jr. and Todd McShay, and the former Auburn transfer is likely to attract a slew of NFL scouts to the Dome.

Willis has piled up 838 yards of total offense — completing 71 percent of his passes for 613 yards and seven touchdowns with no interceptions, while leading the Flames in rushing with 225 yards and four TDs on 34 carries. He led all FBS quarterbacks last year with 944 rushing yards and 14 TDs on the ground.

His production accounts for 64.1 percent of Liberty’s total offensive yards and he is 12-1 in his career as the Flames’ starter, including a 38-21 victory over SU last year in the Dome.

Willis has played a key role in elevating Liberty in its third FBS season, all under head coach Hugh Freeze. The program is the second ever to reach a bowl game in each of its first two years since jumping from the FCS and the Flames garnered the most votes among teams outside the Top 25 of both major national college football polls this week.

The SU defense appears up the challenge of limiting Willis after its strong start to the season. The unit ranks fourth nationally and leads the Atlantic Coast Conference in total defense, allowing an average of 225.3 yards per game.

Syracuse has held back-to-back opponents to less than 200 yards of total offense after going six full seasons without accomplishing that feat. The Orange is averaging 10.7 tackles for loss per game to rank third nationally and is one of two FBS teams with multiple performances of 14 or more.

The SU defense has only surrendered a combined 16 first-half points in three games, after allowing 10 or more points in the first half of all but one outing last season.

“Our identity is to be aggressive, physical, and have effort to the ball,” SU linebacker Mikel Jones said. “If we do those three things every game by being us, then I feel like we’re going to give everybody trouble.”

Babers does not intend to declare SU’s starting quarterback pregame between redshirt junior Tommy DeVito and Mississippi State transfer Garrett Shrader, who have been competing to seize the role full-time over the past two games.

Earlier this week, Babers said that the coaches were still evaluating between the pair, and they would decide on the starter that would be kept private going in to avoid giving Liberty a “tactical advantage.”

Babers likened the situation to a starter and relief pitcher in baseball and said they hope the starter “can go the full nine,” moving forward but would call on the bullpen if needed.

DeVito was listed ahead of Shrader on the weekly depth chart and has started each game thus far.

“They will know first, the team will know second, and the media will know third,” Babers said of the decision. “Hopefully, it’s that order.”

Syracuse will open the ACC schedule at 3:30 p.m. Oct. 2 at Florida State to be televised on the ACC Network.

NOTES: Rochester native Joshua Mack will aim to provide the offensive complement to star QB Malik Willis for undefeated Liberty. The Pittsford-Mendon High School product and redshirt senior leads all active FBS running backs with 3,769 career rushing yards but is off to a slow start averaging just 3.3 yards per carry. He did not play last year in the Dome due to injury.

The Flames rank eighth in total defense and 12th nationally in scoring defense, yielding just 234 yards and 13.3 points per game. Storey Jackson has 20 tackles, including 2.5 for loss, and Kendy Charles has four of the their 10 sacks to lead the way.

SU senior Cody Roscoe ranks fourth nationally with an average of 2 TFLs and 11th in sacks (1.17 per game) to spark SU’s defense. They rank 12th nationally in red-zone defense (.637) and have allowed just three TDs to opposing teams in 10 red-zone trips.

SU and Liberty split their first two matchups. SU won 24-0 at Liberty in 2019 and suffered a 38-21 loss last year in the Dome. The Orange limited the Flames to minus-4 yards rushing in the 2019 win and allowed 338 on the ground last year.

He ran for 111 yards against Liberty last year for his first career 100-yard outing.

LIBERTY PLAYER TO WATCH: QB, Malik Willis — The intriguing NFL Draft prospect went 16-for-20 for 182 passing yards and a TD to go with 58 rushing yards and a score on 12 carries to lead Liberty past SU last season.