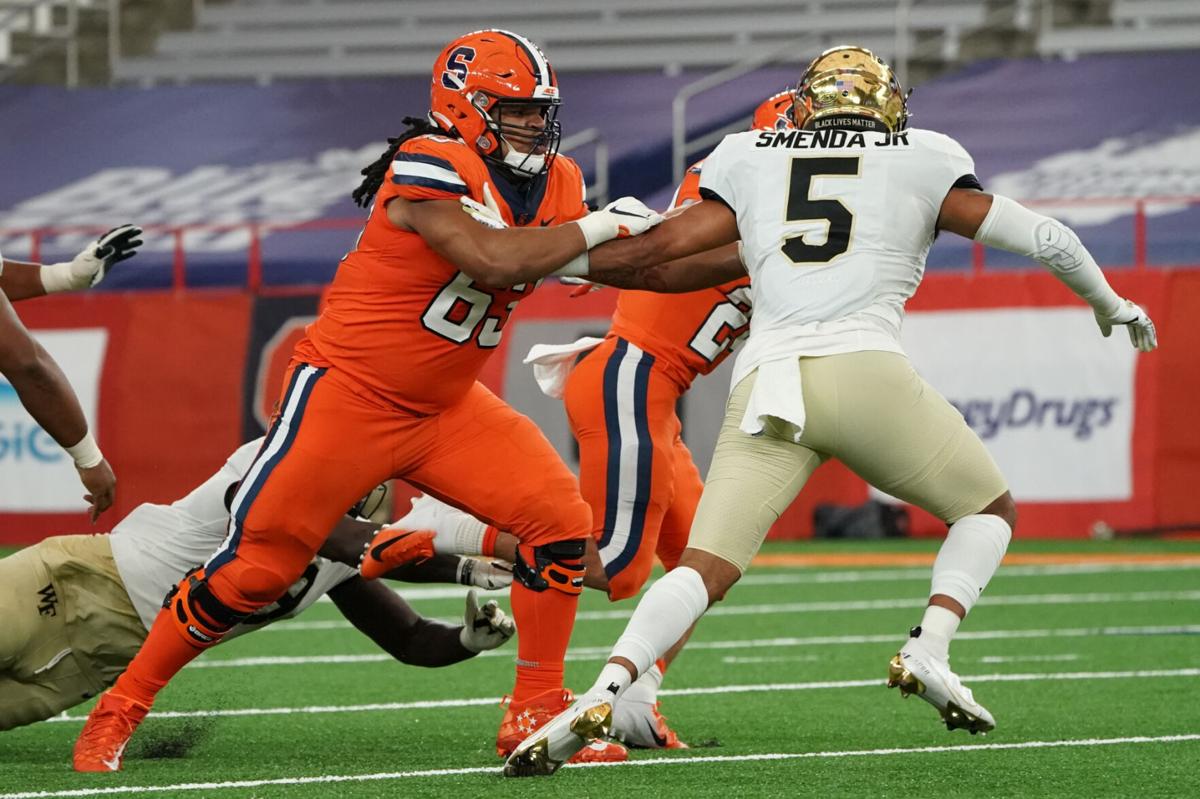 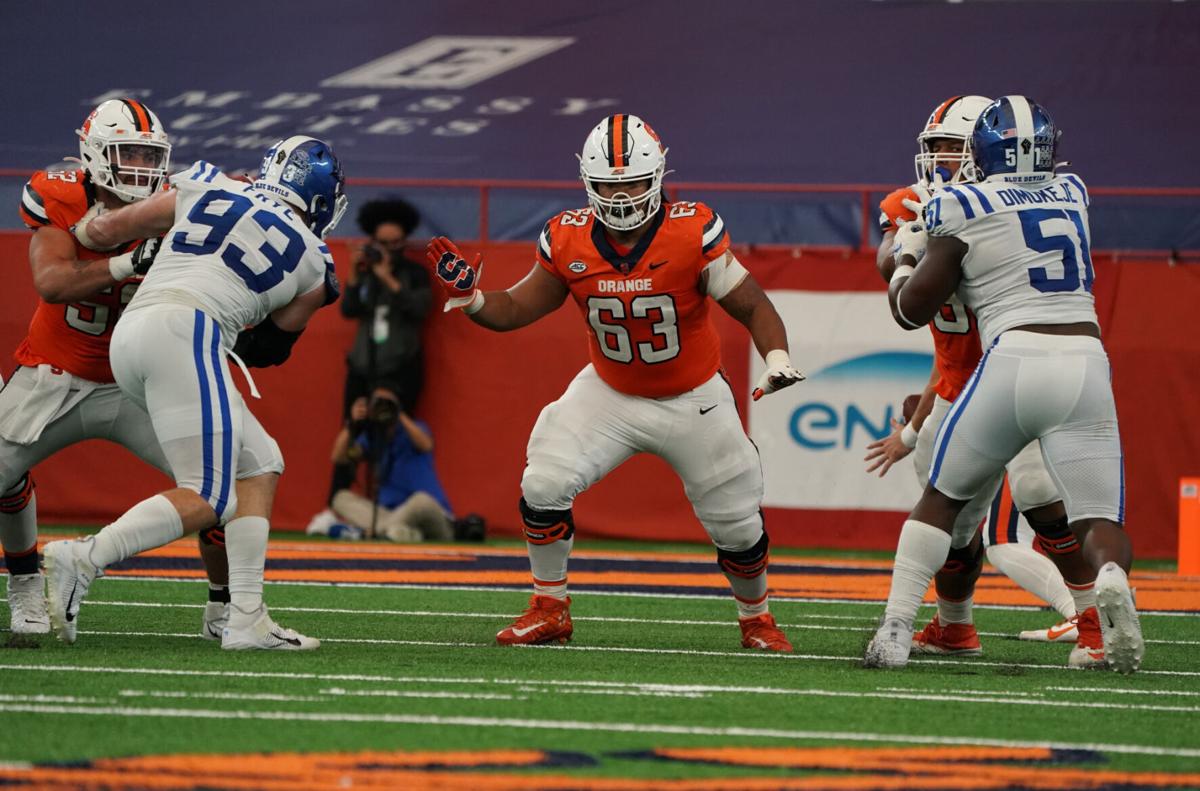 Syracuse senior Chris Elmore, center, waits to deliver a block against Duke on Oct. 10 at the Carrier Dome in Syracuse. Photo provided by Syracuse University Athletics 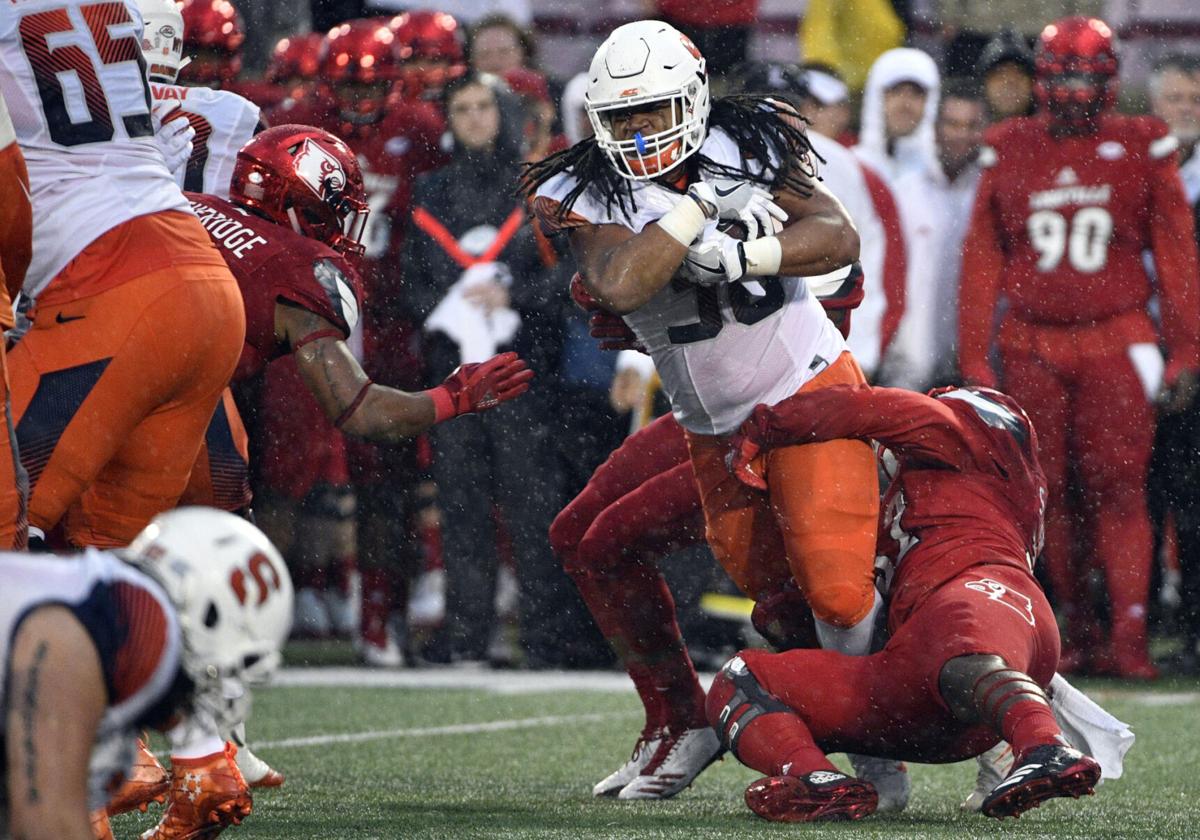 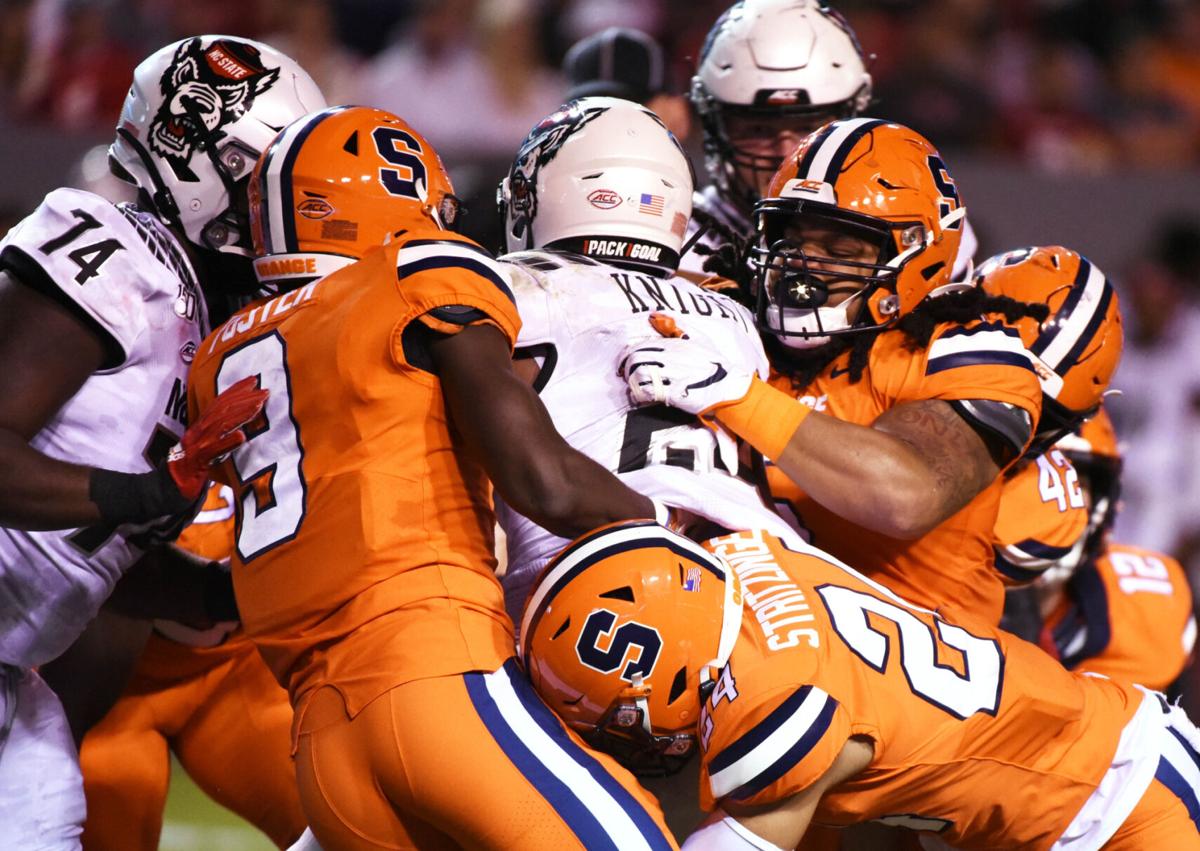 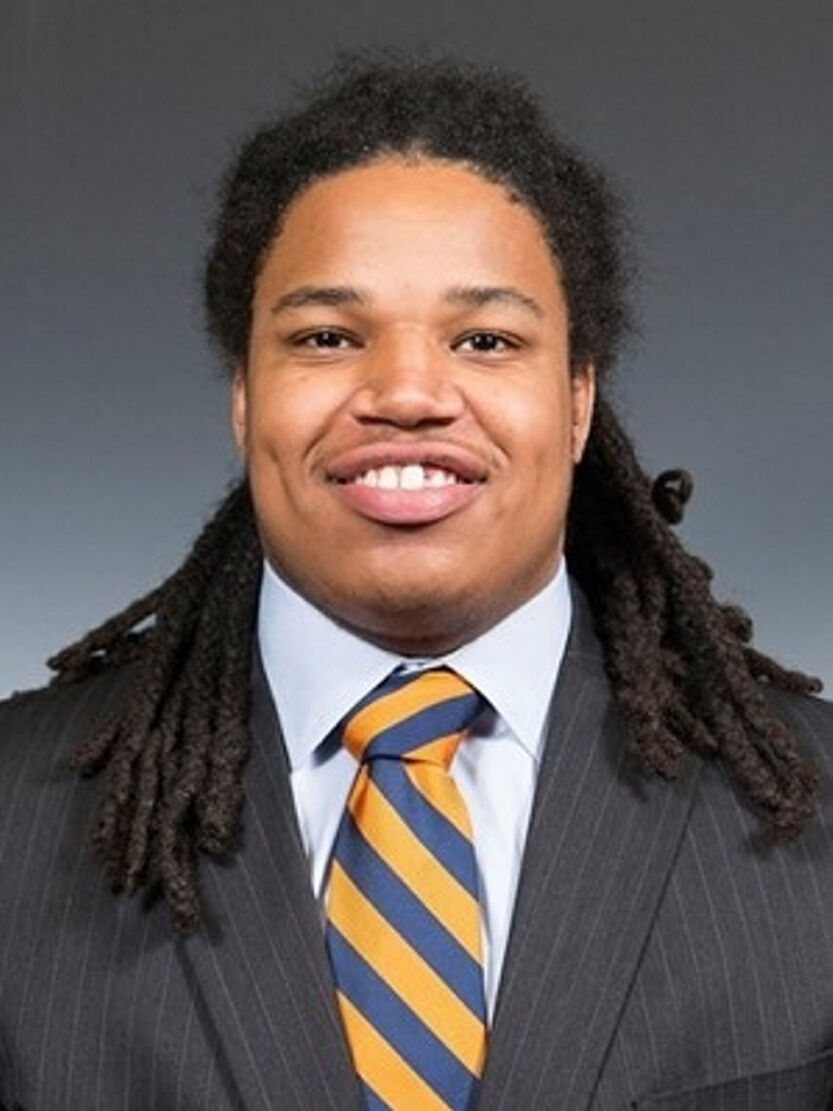 Syracuse senior Chris Elmore, center, waits to deliver a block against Duke on Oct. 10 at the Carrier Dome in Syracuse. Photo provided by Syracuse University Athletics

The No. 63 jersey of Chris Elmore sat on a storage cart with a set of shoulder pads inserted for the duration of the Syracuse University football team’s final home game last Saturday in the Carrier Dome.

After switching to offensive line in training camp to help the depleted unit — a move that fifth-year coach Dino Babers believes saved the Orange’s season — the senior affectionately nicknamed: “Rhino,” has returned to his natural habitat.

Elmore lined up at fullback in his familiar No. 5 jersey last game and is likely to remain in the backfield as he helps lead Syracuse (1-9 overall, 1-8 Atlantic Coast Conference) into its season finale at 2:30 p.m. Saturday at second-ranked Notre Dame (9-0, 8-0). The game will be televised on NBC.

“Chris Elmore is so unselfish, we would not have been able to finish the season without him, there would have been 11 no-contests without Chris, and I can’t thank him enough for the unselfish act he did in keeping us afloat,” Babers said. “Even though the no-contests would have helped my win-loss record, from a team standpoint, we needed to play these games and needed the growth.”

Elmore was asked to play up front during preseason training camp when injuries and other circumstances started taking their toll on the line.

Both expected starting guards were ruled out early. Dakota Davis missed the first six games due to injury, while Florida transfer Chris Bleich was not granted a waiver of immediate eligibility by the NCAA as many within the program had anticipated. Senior Pat Davis also was injured, further depleting depth.

Elmore — the versatile 6-foot-3, 288-pound senior from Chicago — graded as SU’s top offensive linemen through the first nine games, according to Pro Football Focus College, despite playing the position for the first time since high school.

“When you think of O-linemen, you don’t think of a 6-foot-nothing guy who hasn’t played O-line in a minute, so I was like: ‘I don’t know, but I’ll do it for the team and I’ll give it my best,’” Elmore said.

Elmore has played in all 47 games for SU over the past four seasons and lined up at fullback, tight end, offensive guard and defensive line.

He served as a key lead blocker at fullback and tight end over his first three seasons and played seven games at defensive line as a junior last year to help fill depth among that group. That positional switch was not new to Elmore, who established the Illinois state record with 44 career sacks as a high school star at Chicago’s Phillips Academy.

For his Orange career, Elmore has rushed for 65 yards and three touchdowns while registering nine tackles on defense. He has delivered several key blocks on rushing scores and special teams plays through his tenure, including on SU’s kick return touchdown last game to mark its longest since 2011.

“Rhino is an amazing football player, since I got here, I’ve watched him step into roles that not a lot of guys could step into,” SU junior wide receiver Taj Harris said. “Whenever he’s asked to do anything, Rhino is going to get it done. Look, if every quarterback goes down, guess who’s going to play quarterback? He’s a heck of a player and his move to O-line just shows you how adaptive he is.”

Elmore’s signature wide grin has also been valued by SU coaches and teammates in the locker room throughout a challenging campaign. The senior is frequently seen trying to hype his teammates on the sideline and taking a younger player aside when coming off the field after a series for some pointers.

“My biggest things is just look at the position you’re in because there are people who are back at home, guys that I or people on my team might have played with, who never got a chance to play college football and would do anything to be in your position right now,” Elmore said. “You got to look at it like, anybody could be in this position but for a specific reason, you are, and take that mind-set and use it day by day.”

Babers said that Elmore was moved to fullback again to boost his chances for an NFL future after Dakota Davis became healthy enough to start and play full-time at guard. If ‘Rhino,’ decides to return for a final year of eligibility with SU next season, he is expected to stay at fullback.

“In the last two games it was time to get Chris back to where he’s maybe going to have a chance to play in the league, we see him as a big fullback, blocking tight end-type guy in the National Football League if he’s going to get an opportunity, and we wanted to get back to that,” Babers said.

Sophomore linebacker Mikel Jones has been a season-long bright spot among the emerging young players on the SU defense. He enters Saturday’s game ranked in the top 10 nationally in all three takeaway stat categories.

The Miami native has helped SU to a share of the national lead with 22 total takeaways.

Szmyt enters the game with 56 career field goals and is just three shy of tying Cole Murphy for the Orange record. He leads all FBS non-seniors and is seventh nationally in career made field goals.

Hackett is tied with Nick Provo for the most career receiving touchdowns by a tight end in SU history with nine, while Tucker enters with 525 rushing yards, which is 30 yards shy of moving into the top five all-time among Orange freshmen.